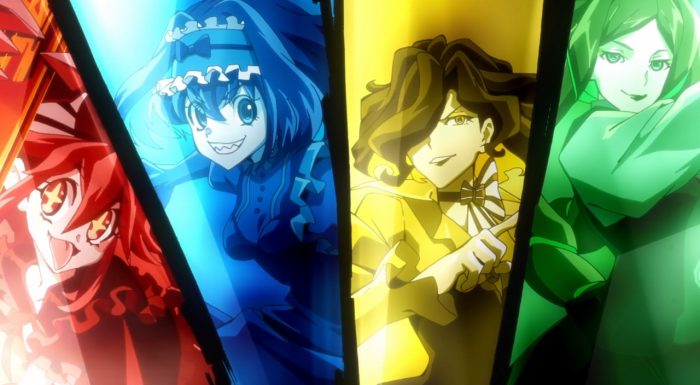 Symphogear just keeps bringing out amazing episodes. I legitimately loved this episode and where they went with it. And we’re really only just passing the halfway point. What the heck is going to happen next? I can predict general points, but a lot of things are actually left open to guessing at. This episode had a ton of moments I would have never predicted. Part of me was hoping that we might see Carol again in some sort of mental dream scene. But I never would have thrown out there that the autoscorers might return much less that Carol would consciously re-appear. The next episode could be straight up insane. I’m kind of wondering if we don’t see Carol just straight up wipe the floor with Noble Red. She doesn’t have the memories to burn that she did before so that probably evens it out a bit though. 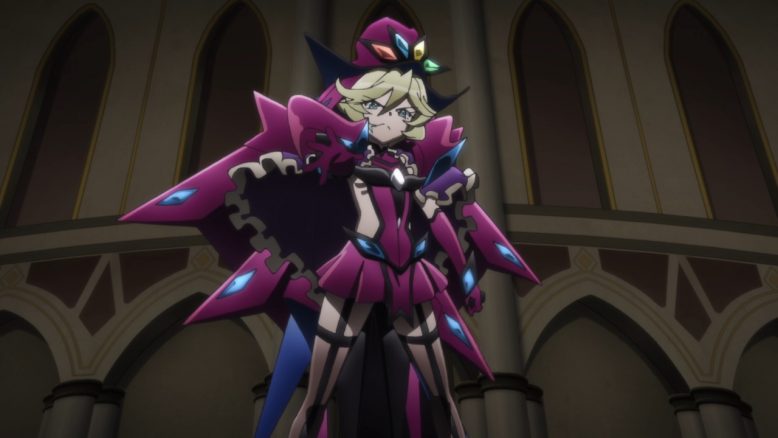 The autoscorers and Carol kind of stole the show with their appearance in this. And I’m perfectly fine with how things played out here. It isn’t beyond belief that their personalities/bodies would have spares in Carol’s base and that they wouldn’t be too strong since they didn’t have memories stored up. In the end the autoscorers were willing to follow Carol even to self-destructive ends. So I can buy that if they were powered up along with the rest of the facility that they’d throw themselves into danger to protect Carol’s body.

Not to mention I’m fully glad to see Carol here. She still holds up to me as one of the better villains in the show. Her plan in GX was well put together and I was fine with her backstory. I could see someone really turning to hate after their parent was murdered by the people he had kindly saved from plague. That’s enough to drive anyone crazy with anger. Anyways, back to Carol here. I could see her resurfacing in part because of Elfnein’s efforts (mentioned in passing in both this season and the OVA episodes) to tap into her own mind and memories. Heck, I can more or less buy that in the process of merging with Elfnein, Carol started to pick up some of the memories she had burned away in the final confrontation of GX. 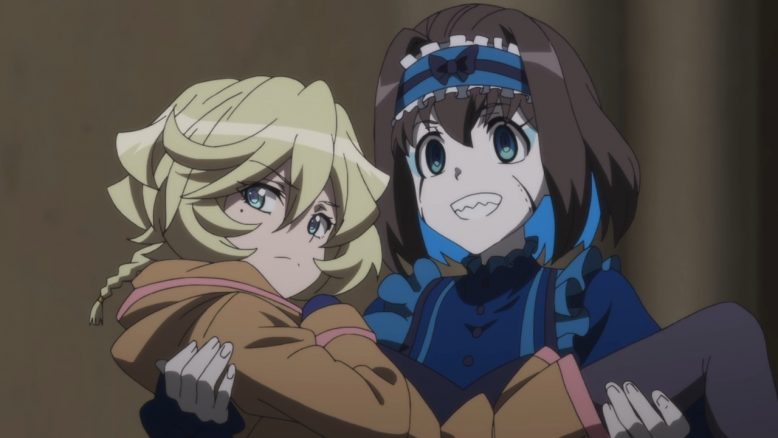 It was kind of nice to step away from the main cast a bit. Elfnein has been hanging around for a long time and this season is continuing her personal growth. She did everything she could to stay alive and then made the difficult choice to try and save Miku herself instead of running. I give full respect to Elfnein for trying to do the right thing. She did need to get rescued, but it shows how far she’s come. No longer is this some weakling who desperately ran from Carol to the gear users. Sure, things didn’t work out perfectly. But I respect her efforts to at least try. And I’m very interested in seeing how the next episode plays out. Carol is incredibly powerful. But she probably doesn’t have nearly the memories to burn that she used to and may refrain from doing that period. 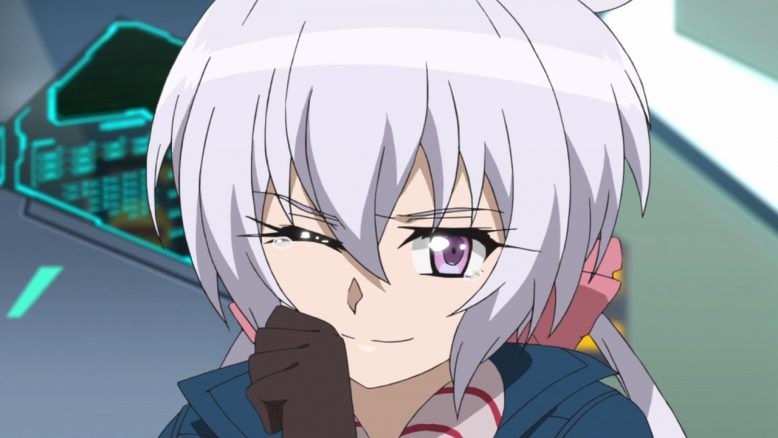 There was other interesting things to consider. They are still laying up the Miku and Hibiki drama that is bound to arrive. Now the interesting thing is that both Miku and Hibiki are thinking about each other and neither desires a confrontation. I can’t see Miku happily starting up a war here. Maybe she’ll end up controlled or manipulated by whatever she saw last episode. But for the time being she should just want to get away from that bracelet and make her way to Hibiki. The same should be said for Hibiki. She’ll want to punch her way past that creepy monster floating by Carol’s base and go for the person she cares about most. Also, I do really like the little scene of Chris getting emotional about Miku being ok. A nice reminder that she does consider Miku to be special. 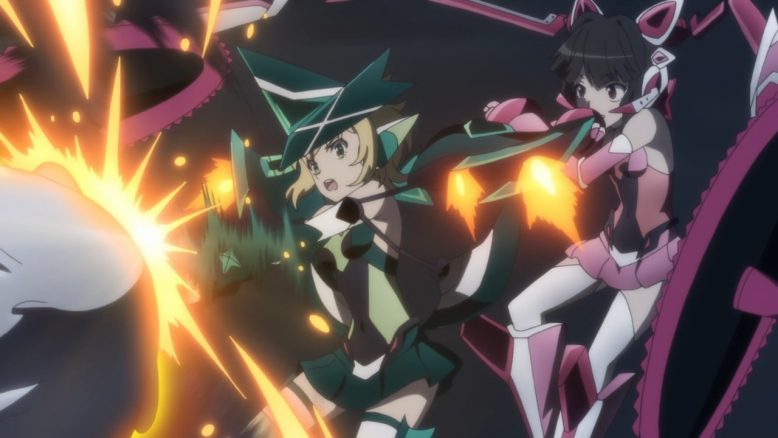 The action in the first part was plenty fun. I liked the little confrontation with Vanessa and how Chris just fired even despite the silly situation she was in. She is the type to just go for it. And it was a fine move since she did come out of it less damaged than Vanessa. The other fight against the godly entity was pretty solid. I was happy to get another run with Kirika’s song. That entity was not easy to deal with and it is hard when only Hibiki can do serious damage to it. The others can only harass it a bit. And this thing was pretty dangerous in that it knew Hibiki was the greatest threat and focused on putting her down when the chance presented itself. 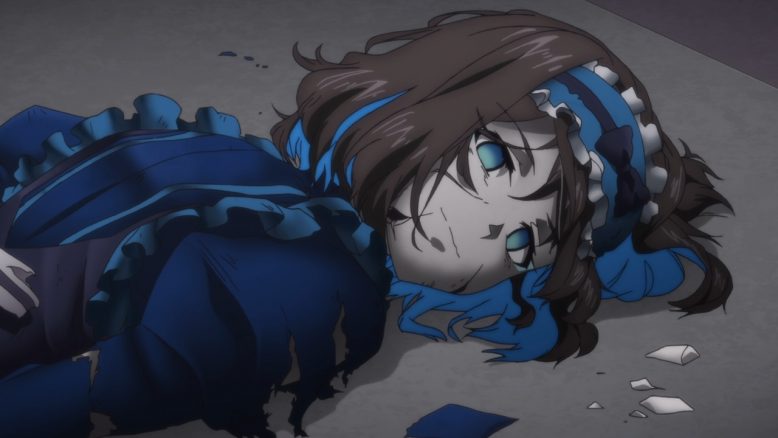 Anyways, I loved this episode. It was a ton of fun and I liked having one more chance with the GX crew. That season was rough and had some weaker writing compared to the rest of the series. But here we got to see characters like Garie, Micha, Leiur, and Phara have one last time in the sun. They were some of the most entertaining support villains that the show has had. Even if they were in scrap bodies and probably low on memories to use, they did a nice job getting their master where she wanted to go. These were bad ‘people’ and they did bad things. But, nothing wrong with letting some villains get a bit of redemption before they go down for good.