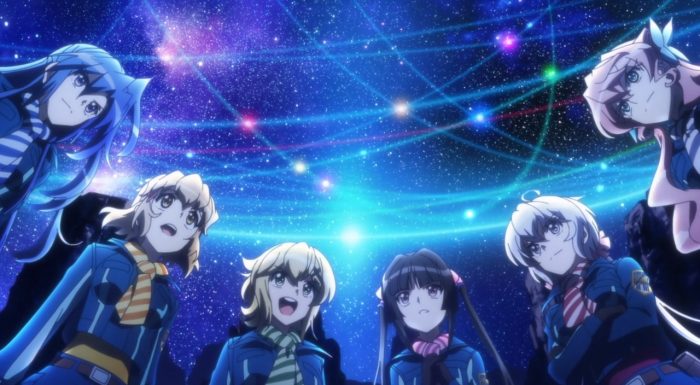 I can’t remember if Symphogear has ever had a second episode that overshadowed the first like this one. The first episode was amazing and yet somehow we managed to go even beyond that. This episode managed to capture both the incredible action and the gut punch quality that Symphogear has the ability to unleash. This was the tale of two halves and yet they both came together in a nice way. We got to see some of the best indoor action and one of the best fights from Kirika/Shirabe in the series to this point. The fight, action, and music was beautiful and I’ve got zero complaints. And then the second half hit with the most tragic scene in Symphogear since the start of S1. In some ways that concert tragedy may have surpassed the original. The main cast survived, but nothing quite compared to this brutality. 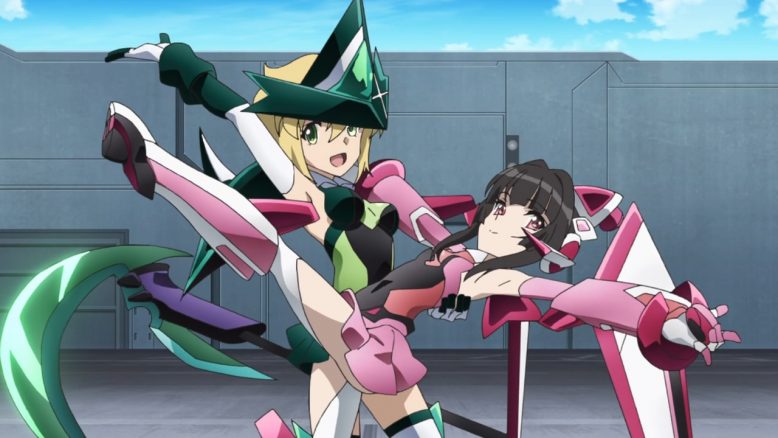 These two are closer than ever

Let’s just focus on the fun stuff first. That fight with Kirika and Shirabe vs the alchemist was outstanding. They were pushed, tested, but they also rose above their challenges on their own. I’m not sure you could write a more perfect way to let these two shine together and apart in the same action scene. The whole thing just felt like perfect Kirika and Shirabe. You had the silly bits like Kirika forgetting her linker so Shirabe brought it for her. We even had the very yuri way these two manage to inject linker. It just shows the trust and cooperation that they make sure to not inject themselves but look after the other person. And you can see their utterly connected ways of fighting on top of the ship; Kirika setting up the enemy, Shirabe finishing it off, and Kirika catching Shirabe in a very cute pose. 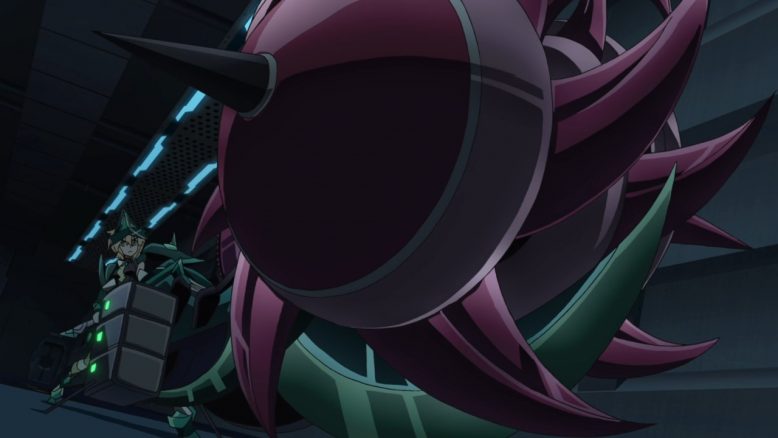 Next season of Beyblade?

And the action works perfectly well into the ship. We get to see here how Kirika and Shirabe have matured over the show. They are able to adapt and handle difficult situations alone, but work best together. Normally you’d expect the villain to win this confrontation. Kirika would screw up by chasing down their foe, getting her weapon stuck since the ship is compact, and Shirabe would be beaten in isolation. But that’s not how it is anymore. Kirika realized her problem and adapted. She pretty easily handled things and made her way to Shirabe. And Shirabe as well has grown to stand on her own and fight back. Together they were way too much for their opponent. Whatever she was holding back, I’d trust in their ability to win out in the end. Also…they have a beyblade combo attack now! These two are awesome. 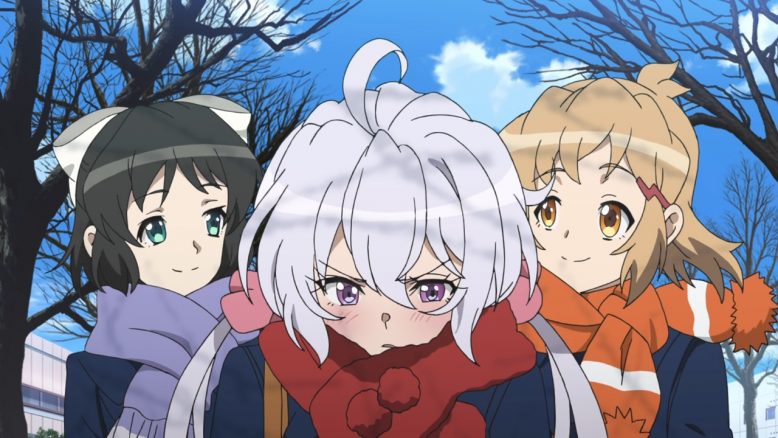 I really liked the scene with Hibiki, Miku, and Chris. Her birthday wasn’t a plot even and they kind of skipped over it leading to this episode. But they did show the party and what Chris got as a present. And honestly it feels refreshing. We haven’t seen much of this trio in the past few seasons. Chris considered Miku a huge existence that saved her back in S2. So it is nice to see these three hanging out and getting along. It is also a reminder that time marches on. Chris is heading to her last days of high school before going to college. It was just a cute scene that shows how much Chris appreciates spending time with her friends. She’s already punched her ticket into college and could chill at home if she wanted to. But she doesn’t and that of course says everything. 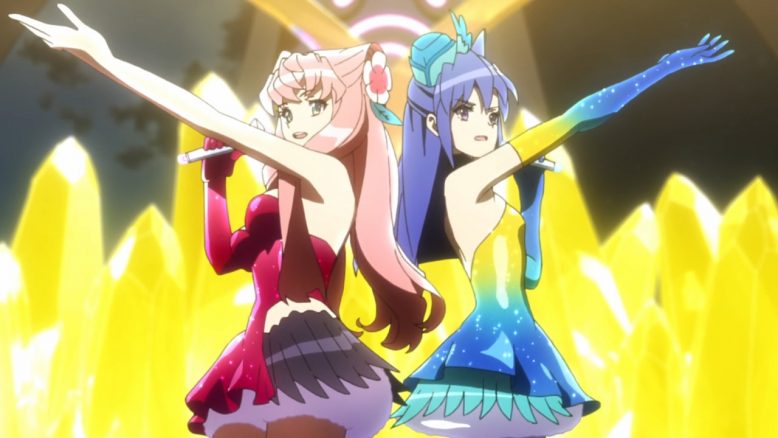 We are just getting a lot of little scenes that flesh out the various groups of characters and where they are right now. Maria and Tsubasa do make such a nice pair and I look forward to seeing how things play out with them this season. This episode is a massive gut punch for Tsubasa and Maria may need to be a rock for her to lean on. It will of course be tough for Maria to see all this and know she wasn’t exactly far from starting this kind of slaughter herself. But I liked seeing how Tsubasa does want to sing with Maria and pushed for her to join the concert. No doubt Maria has a lot of baggage, but she does shine in the spotlight. It might not be a bad thing for Maria to try and move forward doing things she loves to do. 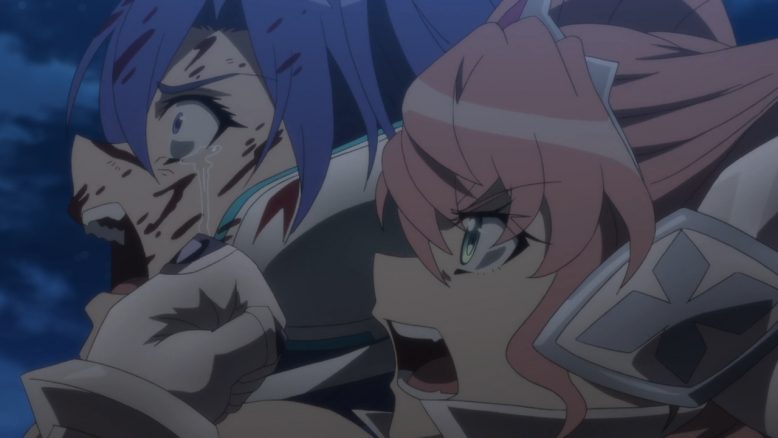 Now we’ve got to reach that concert. It has been a very long time since a concert was this tragic in Symphogear. They didn’t have one last season, but if this was planned in connection to XV then it makes sense. You don’t want a concert that season and instead just save it all for this moment. A huge high point where Tsubasa more or less has a new singing partner and is loving where she is. And then it just all goes to hell in a second. It was a total disaster that there was no dealing with. It was a smart move to just keep the transformations simple and the singing silent. This wasn’t a glorious moment or a great showdown. This was just a terrible disaster and pure murder. The action was rough and gritty as it really should be.

This is the first time since they first appeared since the Alca Noise have been so horrific. They can slaughter people just as effectively as the original noise ever could. And it shows how chaotic and disastrous this sort of attack is. Tsubasa and Maria are badasses. But they are two people trying to protect thousands in a sizable area. When they aren’t the ones being targeted, trying to protect people isn’t easy. That creepy alchemist isn’t more powerful than Maria and Tsubasa. But she didn’t need to be. Maria had her hands full trying to save people and Tsubasa was losing her head understandably. That scene of a hostage being killed is just trauma inducing. Whatever she did on top of that I don’t know. But this is going to define Tsubasa’s entire arc this season. 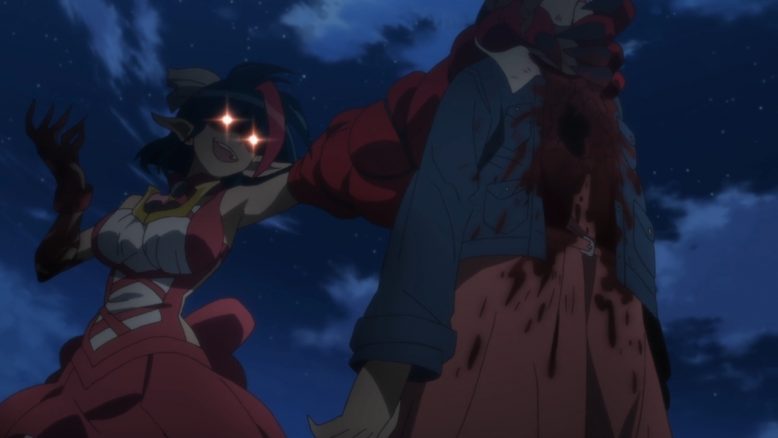 This episode was insane. In a lot of ways it is a better episode than even the last one. This is an episode that can define the entire season. We had some wonderfully high point moments like the Kirika and Shirabe fight. The story continues to progress with the mystery around the Custodian’s corpse and device. As always the political side is there with the serious clashing between the US and Japan in this franchise. And we’ve got the personal moments like Chris’ progression as a person, Tsubasa’s newest emotional trauma, and whatever plot the alchemists have in mind. I don’t even know if Ogawa is ok after this episode. All of this with an enemy that isn’t as powerful as what we had last season. The main cast are struggling with a devious enemy that doesn’t care about casualties or sneak attacks. We are in for a crazy season.