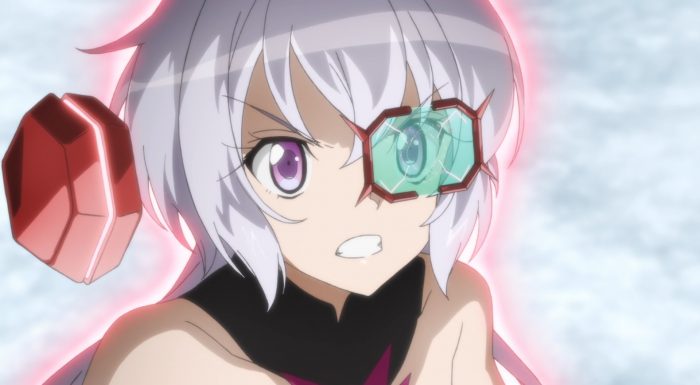 This was the moment I’ve been waiting all year for! As always Symphogear’s first episode delivered on every level. I couldn’t have asked for more than the Symphogear team throwing all sorts of crazy attacks and combinations at a devastating threat. They just took it to the world’s deadliest coffin. There might be a deadlier coffin in the history of fiction. But I still think this one is up there. You really could conquer the globe with that thing. I can understand why Adam was interested in it. Good thing he didn’t end up finishing off his plans and gaining the kind of insane power he was after. That did leave that over the top coffin up to the main cast to deal with however. 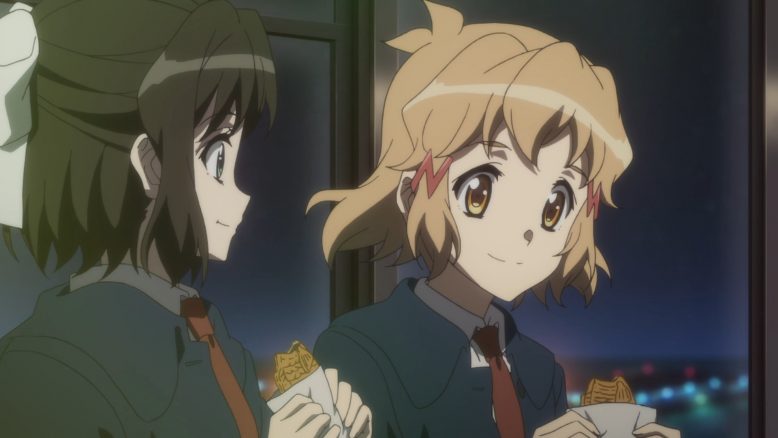 A moment of peace before things get crazy

The stage is being set for the major plot points. Hibiki may be walking into a rather tricky heroic dilemma here. The kind of question Miku poised just isn’t the type to remain unimportant in this kind of series. Hibiki may be stuck having to decide whether to save people or to avoid confronting Miku. Considering Miku does have the potential to harbor that divine power from AXZ, she is a major target. Of course if someone was controlling Miku than it is simple. Just get out there and save her. Not all that different from S2 when Miku was being controlled by Ver. But no doubt there will be some big drama. Heck this could even tie into the future. Will Hibiki continue focusing on being this global hero or focus on sticking with Miku? There may not be the option for both. 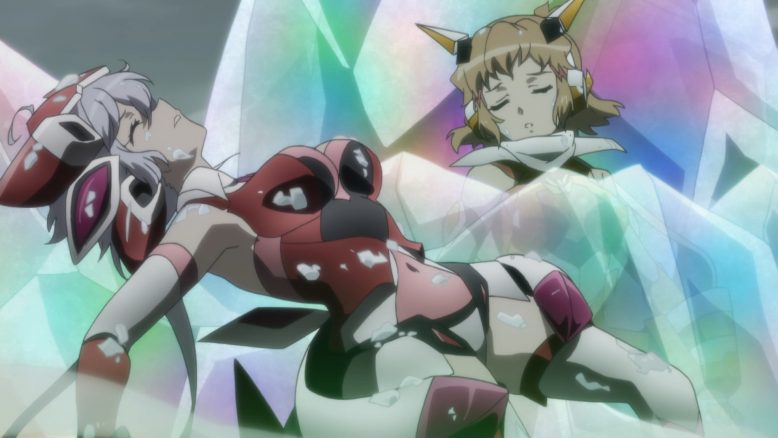 Having a rough day.

There are a lot of little details that are bound to have some relevance going forward. After Hibiki’s birthday last season now we’re at the very least touching on one for Chris. Considering it was brought up twice I wouldn’t be surprised to see that party happen. And you can do some good story moments with that. Chris is much like former FIS crew. With the deaths of her parents as a child and what happened with Finé…she hasn’t exactly had a ton of great birthdays. What I’m unsure about is whether her birthday will be part of a character arc, a time when something crazy happens, or if it will just be an end of the season happy party for the team. At this point I’m unsure.

The other little detail is the mission to the moon. Rather impressive things worked out considering the US tried to nuke Japan last season. But a moon mission suddenly has such huge significance and potential dangers. Presumably people still went to the moon at some point in the past. But back then the moon would have simply looked like a moon. Now everyone knows that there is a major facility on the moon. People higher up in governments probably know about how those ruins control the Balal Curse. I definitely don’t want to think about governments trying to fight over a moon base. 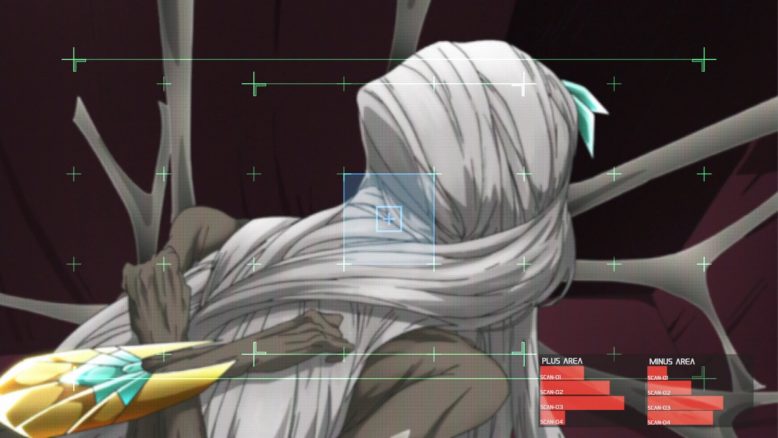 As with other seasons the start of this episode was pretty important. This does seem to be the guy who established the curse and was involved with Finé. We could end up with another Finé flashback this season. There are a lot of questions to be answered of course. Why did he activate those ruins? And why was he dying while he was doing it? Just what happened in the past that lead to all this? Sadly for him Finé most definitely did not take what happened well. This is the person who effectively created a lot of what is driving the series. She eventually passed on peacefully in S2, but only after cursing untold numbers of her descendants. Finé killed a lot of people and ruined a lot of lives over what happened with this guy. 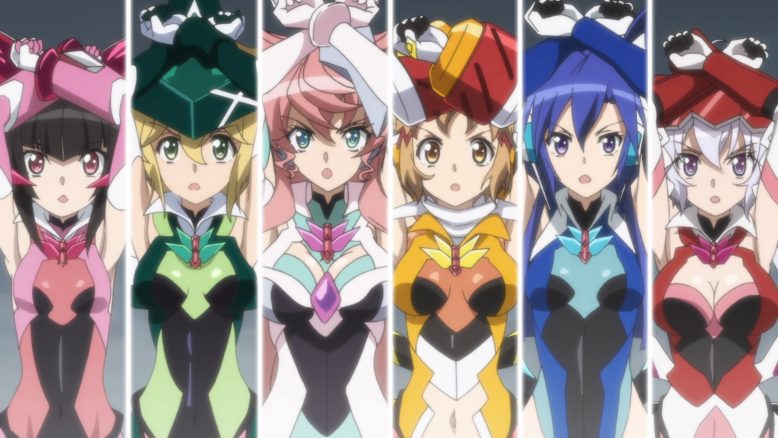 But really the action deserves so much discussion here. This season by far had the most incredible transformation sequence I’ve ever seen. Opinions may vary, but holy crap that was insane! If this is the final season then these are going to be amazing transformation sequences to go out on. It’s amazing seeing how far they’ve come from S1 to now. This wasn’t even so much a fanservice thing (although like any transformation there were moments) as much as it was just a pure badass moment for Hibiki to gear up. I can’t wait to see the transformations for each of the main cast.

And that was just the transformation sequence. Much like previous seasons they did not skimp on the first big fight of the season. I kind of liked the approach of starting with the fight, going back in time for context, and then finishing off the fight. It allowed them to make the fight with the coffin a big event. And it really was an event in and of itself. This thing had power, powerful beam attacks, augmentation of the environment, and it required a lot to bring down. We just got attack after attack from the main cast. Hibiki has never looked more awesome with her gauntlets just creating all sorts of crazy attacks. It was something to be seen. 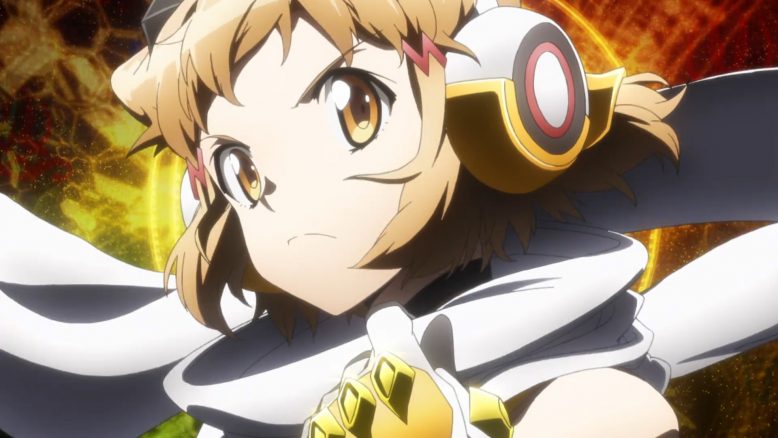 Just about everyone got a moment to shine here. We got hilariously cute moments like Shirabe and Kirika almost pulling figure skating moves in their part of the fight. But you also had Hibiki and Maria showing their very direct styles of dealing damage. These two have always been the main figure of their respective trio so that makes sense. But you also had Chris unleashing missiles, bullets, and shields. Heck she had the biggest moment at the end of the episode in helping to snipe their combined super attack. Finally she gets to snipe something, even if she couldn’t use her sniper rifle for it. I did also love Chris telling Hibiki to stop raising death flags while she was trying to lock in her shot. The combinations were endless with Hibiki even getting an underwater battle in. 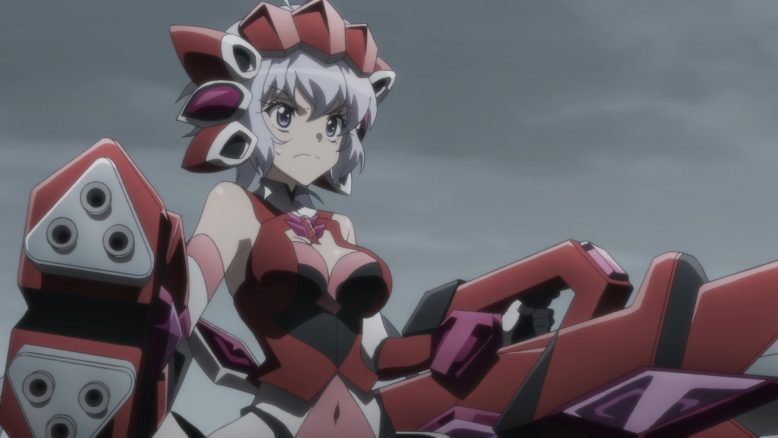 Chris is always packing the firepower

We did get a brief look at some of our antagonists for this season. Here we have remnants of the Bavarian Illuminati with their own objectives. That they weren’t brought in by Adam to assist in AXZ would seem to imply that at present their combat value isn’t very high. But at this point we don’t quite know what they are up to. Their objective is different from Adam, but is it different from Saint Germain?

If nothing else the first episode was a rousing success. We got action, the plot being established, acknowledging of the previous season, and a whole lot of fun. No doubt some future episodes won’t be able to touch the visual spectacle of this episode. But I am glad that we got to see a great start to this fifth season. That Symphogear has come this far is a huge accomplishment. Whatever the future has in store, I plan to fully enjoy this ride. There’s no way I could avoid covering this show. So I’ll 100% be back for episode 2.