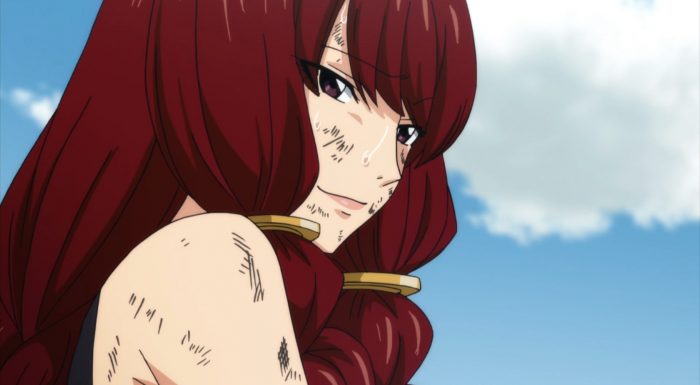 Color me surprised, but I guess Fairy Tail is on an upswing, in the last moments of its Final Season. Remarkably, as we get closer and closer to what seems like the conclusion for the entire franchise, things are looking a bit up. The last few episodes were surprisingly well done, and the show and story even nailed the finish line with a particular story beat that felt both satisfying and fitting. There were no cheap jumps or get out of jail free cards (yet) and in general everything felt resolved and earned. 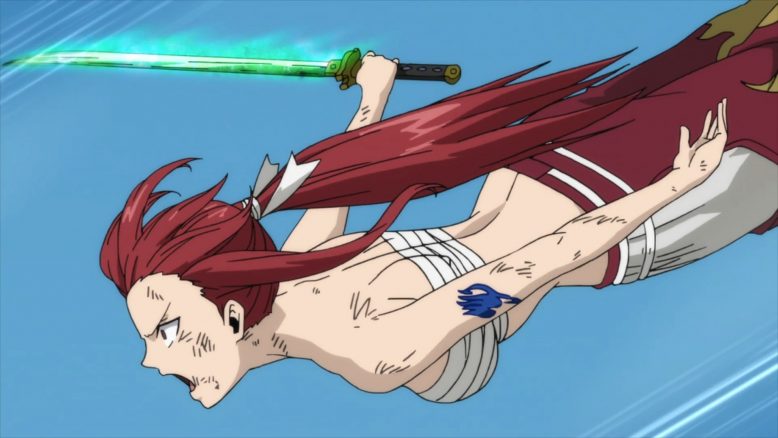 There’s always the danger of things regressing back to the worst parts of this Final Season (and indeed the franchise as a whole), but I’m going choose to believe that the show is going to end in a solid and ultimately satisfying way. The biggest reason for that belief is from the fact that there’s actual solid conclusions and character moments coming in from the story now.

Case in point, this week had the conclusion and the resolution to Erza and Irene’s particular battle and story arc. I have to say, I do still feel like the Irene twist came out of nowhere, and I feel like had the show, the story and Mashima-sensei taken their time a bit more with this, it would’ve definitely felt more organic and powerful. In truth, a lot of Mashima-sensei’s ideas and stories in this Final arc, could’ve had entire arcs of their own. If it had been the mangaka that’s basically written everything up till the Tartaros Arc, then well, we would’ve gotten seperate arcs for each of the twelve we saw in this Final Season. 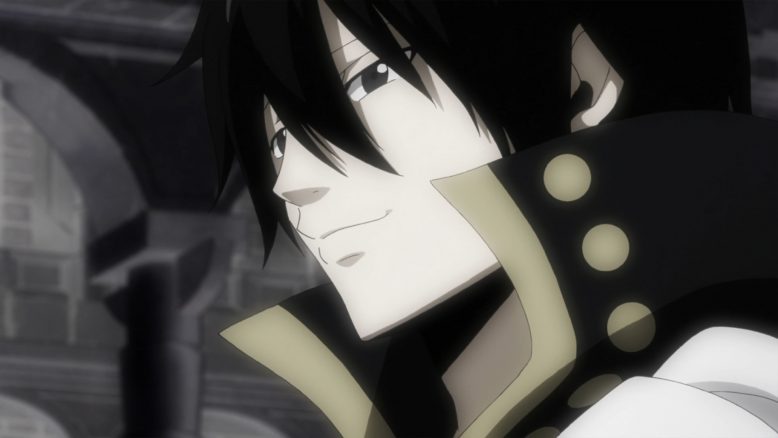 I think a better story would’ve been each of the twelve coming in and carrying out their own invasion, with Zeref finally ending it all himself with perhaps the last two or three. The problem, of course, is that it very much seems like Mashima-sensei was ready to move on ages ago. I’m not sure how I feel about that, especially given that mangaka like Eichiro Oda continue to dominate with their long running shounen arcs.

Its also, a reality, however, that Fairy Tail is not a Naruto or a One Piece, and thus I guess Mashima-sensei wanted to start again and perhaps do a bit better than he has with Fairy Tail. Its unfortunate, but despite the definite skill that Mashima-sensei has, he’s never gotten the breakout success that you’d imagine a mangaka like him would. Both Groove Adventure Rave and even Fairy Tail have been cult hits, always kind of moderately successful but with a smaller more dedicated fan base. 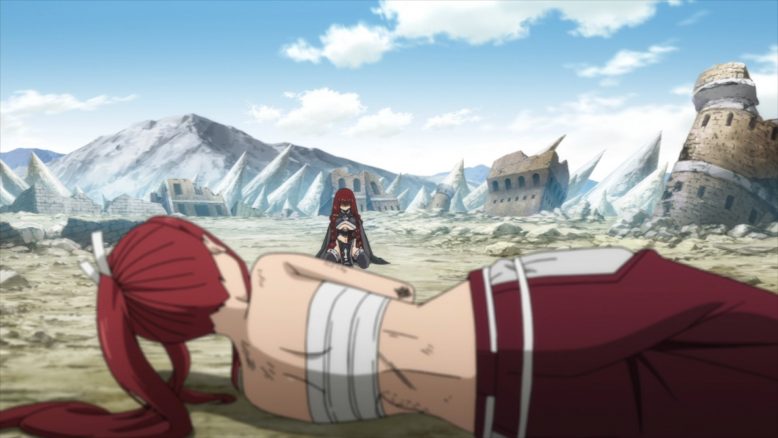 Now, with all of that said, I think its worth getting back to the matter at hand, which was definitely the wrap up of both the Irene stuff, and the Natsu stuff. The Irene stuff definitely worked a lot better for me, and in general I liked the story behind Irene. The twist at the end, of her motherly love winning out at the end was powerful, as was her decision to distance herself from her daughter in case her madness took over.

Irene viewing it as abandoning her daughter after failing to use her isn’t entirely wrong either, because in a way, that’s what happened. But I think it kind of redeems Irene a bit, since in the end, she did prioritize Erza’s life over her own twisted desires. Sometimes, the best thing a parent can do for their child, is to stay away from damaging them. Erza would’ve had a horrible childhood under Irene, especially given her madness and grief, so the one big act of kindness she got from her mother, was to be left alone. 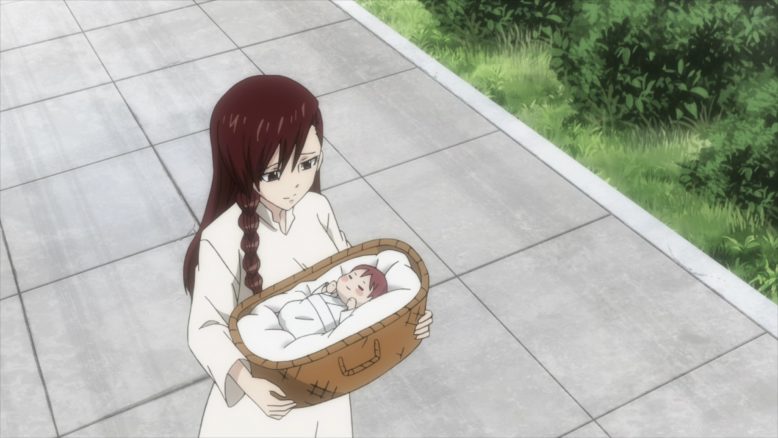 This is obviously heavy stuff, and it points to just how broken and twisted Irene was in that she couldn’t reasonably trust herself to keep her daughter with her. But in the end, I think it was fitting that Irene chose to lose to her daughter after the daughter herself kind of showed off how cool she was. I don’t think it redeems Irene for all the bad she’s done, but he’s not so devilishly evil that I can’t sympathize a bit with her.

In the end, I think Erza puts it best; Irene had a tough life, but her real parent was most definitely Makarov. Speaking of which, Makarov continues to remain dead, which is awesome, because the show continues to use that particular plot point to good effect. The moment between Erza and Wendy, for example? That was awesome and well done. I hope the show, the story and Mashima-sensei continue to stick with the decisions they make. It just makes for better storytelling. 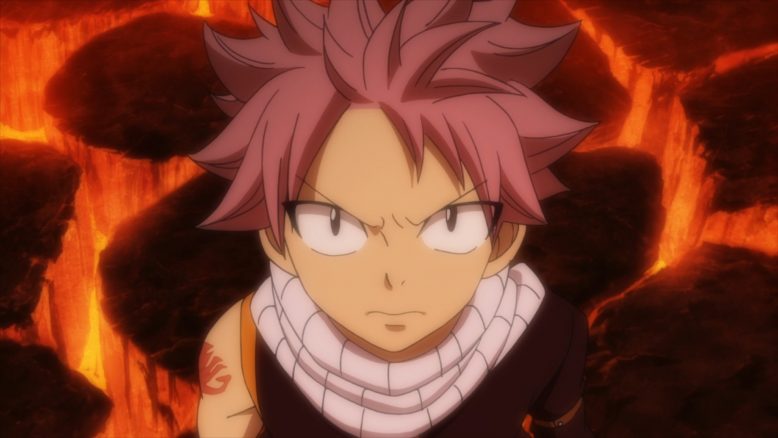 Now, as for the second plot point, well… Lets just say I’m glad its over. The Natsu mind journey thing never really worked for me, and the only good thing about this episode, was that it just put that whole stupid thing to bed. Yes, Natsu is a human, not a Dragon or a Demon…. Yay?

I mean, if anything it just really feels like Natsu needed to be put out of comission in these past few episodes, and I still fail to understand why he wasn’t just kept unconscious and off screen. Its like the show has an unhealthy attachment and obsession with its protagonist. Sometimes, even protagonists can skip off for a couple of episodes while the rest of the cast does their thing. 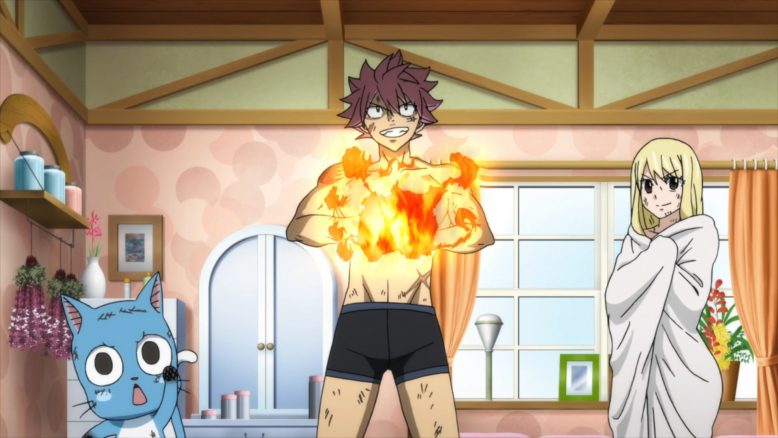 In any case, That particular part of the story is thankfully done, and we’ll now move on to the next and possibly final few phases of this story. With Irene gone, her enchantments go away, which brings everything back (once again) to normal in terms of topography. Thankfully, the whole board doesn’t get reset entirely. Had that happened, then this post would’ve been a bit less positive than it was.

On wards we go I think, while being cautiously optimistic. I’ll just close by saying that it just feels good to see Fairy Tail not suck. Its been happening this Final Season for waaay too long of a time, and hopefully the worst is behind us, and we can just enjoy the final cour or two of episodes without any stupidity mucking everything up.