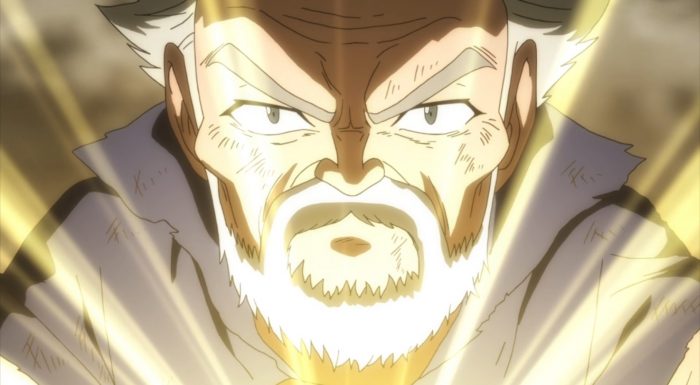 That was actually a solid, good episode for the most part. If you’ve been keeping up with Fairy Tail’s Final Season, you know that that particular fact, is a bit of a misnomer when it comes this show. Its the first time, in fact, when an episode of this Final Season has delivered some solid emotional moments, and not immediately ruined its own hard work with something less crass or stupid. 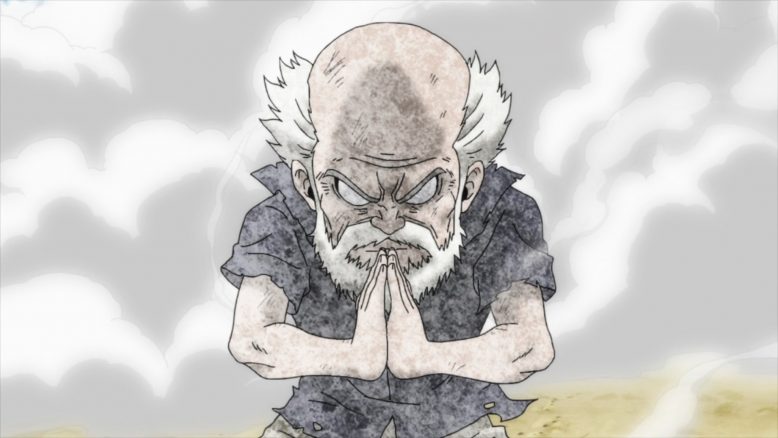 The big headlining moment, despite what the last episode ended on, is not Gray and Natsu’s big fight, but rather Makarov’s big sacrifice and final moments. I will say, that while I’m not completely behind Makarov having to use Fairy Law, I at least appreciate the moment here. Lets just ignore, for a second, that Mavis had some kind of counter plan that would’ve made for a complete and total victory for Fairy Tail.

A total victory in both my eyes and Makarov’s eyes is that not even one member of Fairy Tail has to give up their life to win. And the big assumption here is that Mavis’s big plan wouldn’t end without casualties. Except, well, its sort of implied that her plan will do just that. But hey, lets just asssume that Makarov either doesn’t trust Mavis given her past “plans” or just can’t bear to see his “kids” get hurt any longer. 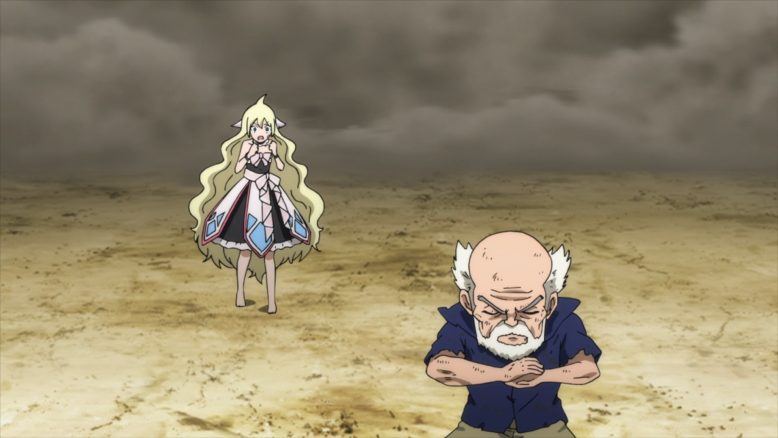 In any case, Makarov’s whole speech about being a parent, his insistence to protect his kids, and the reaction from all his Guild’s members, was a pretty darn well done scene. It didn’t make me tear up, but it felt earned and powerful. The franchise has established, multiple times throughout its run, how much Makarov cares about Fairy Tail and its members, and how much of a doting parent he really is. So to have him basically take out 90% of Zeref’s forces with Fairy Law, and basically lose his life in the process? That’s a pretty well done moment.

And thankfully, the show doesn’t give Makarov a get out of jail free card, yet. Its unclear whether Makarov will actually survive by the end of the show, but at least for now, he’s petrified and dead. The show and the story need to keep it that way for a while, at least until this Final arc itself wraps up.The show has failed to do it thus far, and I think its killed every big emmotional sacrifice moment that a character has had thus far. 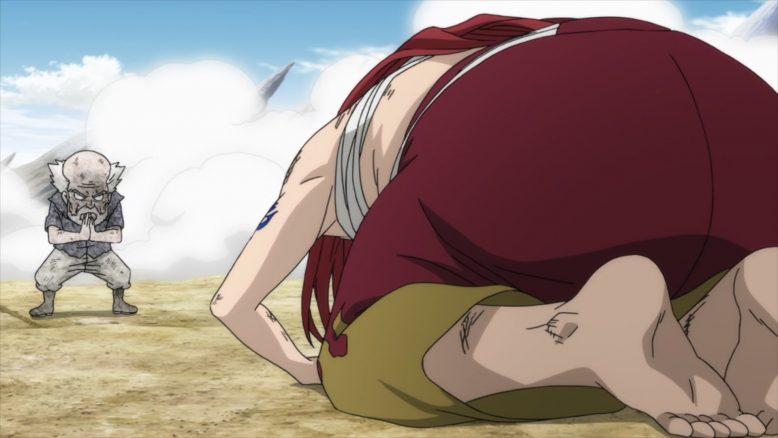 Juvia being revived in the next few moments was perhaps the most egregious example of that, but thankfully this week’s episode doesn’t do that. And thankfully, when the show focuses on Natsu and Gray again at the very end, that whole fight gets resolved in a rather satisfying manner.

See, the show was suggesting, that both Lucy and Juvia would head to the battle area where Natsu and Gray were duking out, and stop them. And let me say, that the episode does actually open up with the two of these guys fighting. Its also about as dumb as you’d expect. 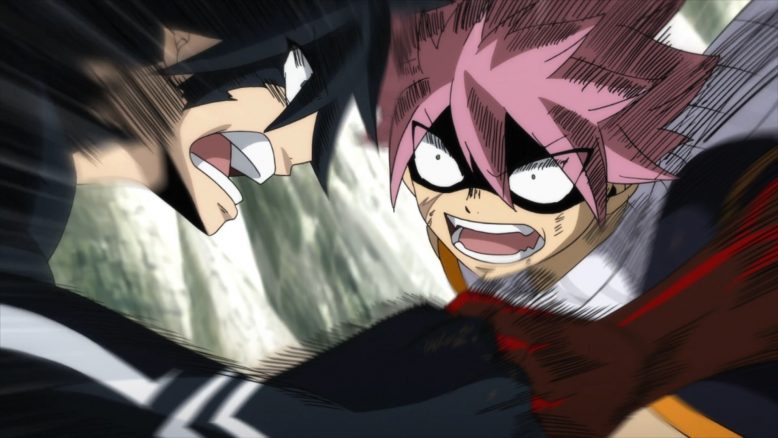 Natsu and Gray have no reason to fight each other. We know it, they know it and Mashima-sensei knows it. Yet, there’s been this whole big development of Natsu being END and Gray dedicating his life to taking out Zeref’s demons. So, since we know that neither Gray nor Natsu would fight each other to the death under even dire circumstances, there has to be SOMETHING that drives them to blows.

In this case? The idea here is that both Gray and Natsu are reeling from the shock of having lost the women they love. Natsu, having woken up in Dimiria’s time stopping realm, couldn’t see that Lucy was just frozen in time. And we all know what happened to Juvia and how Gray felt she had died, but she really hadn’t. 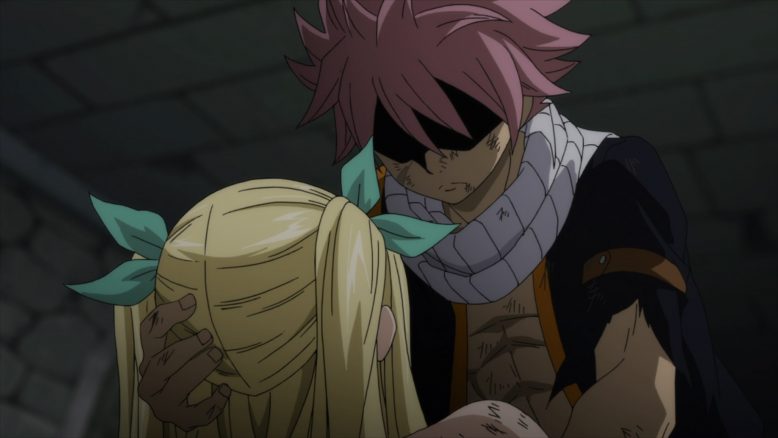 So Mashima-sensei here, tries to have his cake and eat it too. Yes, I can get behind the idea that Gray and Natsu would be driven mad by the loss of the girl they care the most about, except… Neither of said girls are actually dead, nor has the particular romance been developed all that much. Okay, Gray and Juvia have been developed a decent bit, but Natsu and Lucy is still a fan shipping couple as far as I’m concerned.

To suggest that Natsu unlocked his END powers after losing Lucy because he ultimately loves her? Its a bit unearned here. 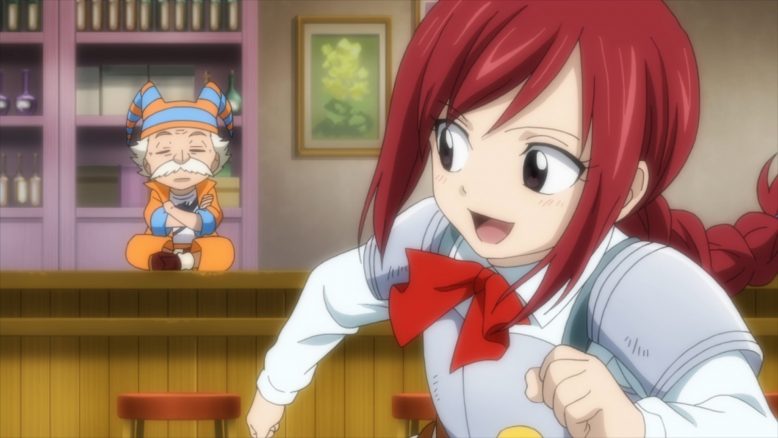 But hey, the show did the clever thing of basically introducing this concept, and then proceeded to focus on the whole Makarov stuff for the majority of the episode. That was smart, because while I’m sure some people wanted to see an awesome clash between Natsu and Gray, I did not (even if the animation for their fight was better than usual). Rather, the only thing that I cared about was how this particular fight was going to end.

The Lucy/Juvia arriving on the scene would’ve worked, but man would it have really killed any point to the whole affair. Instead, Erza coming in and stopping the two in that epic scene where she comes inbetween both of them? That was an EXCELLENT way to end the episode. Erza crying and basically being excessively sad at what Natsu and Gray had gotten into? That was a solid moment to end the episode on. 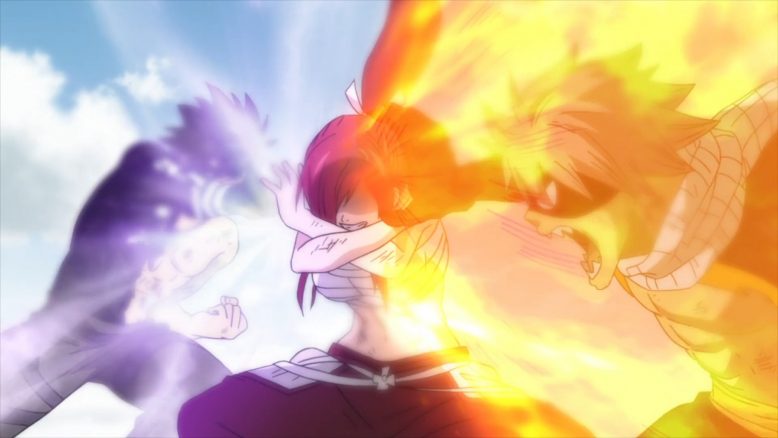 It was unexpected and it felt satisfying. It dove into how darn frustrated the audience itself was with Gray and Natsu, personified that, and then had Erza really come in and drive the point home. I’ll kind of leave it that, because this whole scene deserves its own break down, and given that the next episode does cover it fairly indepth, we’ll talk about it there.

Let it be known, however, that I liked this episode. Despite its flaws, it focused on providing those solid character moments that Fairy Tail was known for, and it did so without throwing in any frustrating or crass moments that could have ultimately ruined the episode. 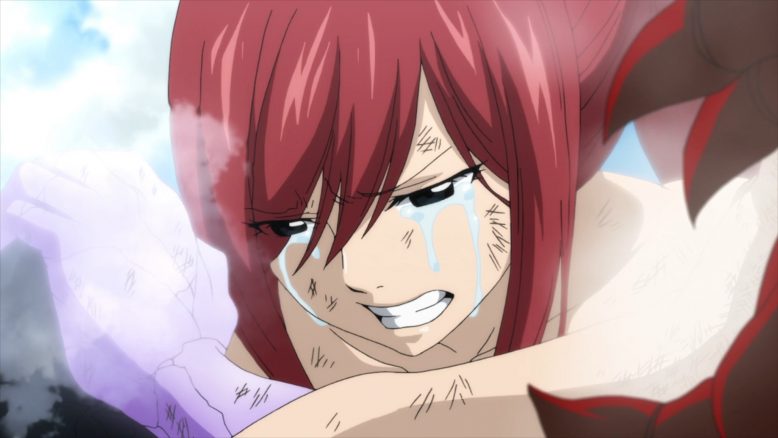 I did miss out on watching this episode and writing about it two weeks ago, so I unfortunately can’t cover this one without thinking about next week’s. There’s more to say though, and while I originally had intended to do a double episode post like I usually do when I miss an episode, I felt like this episode just deserved its own post for how good it was. Now, the bigger question that we’ll cover in episode 33 is, does the show maintain the momentum it establishes here? Well… Check out the next episode to find out my thoughts on that.