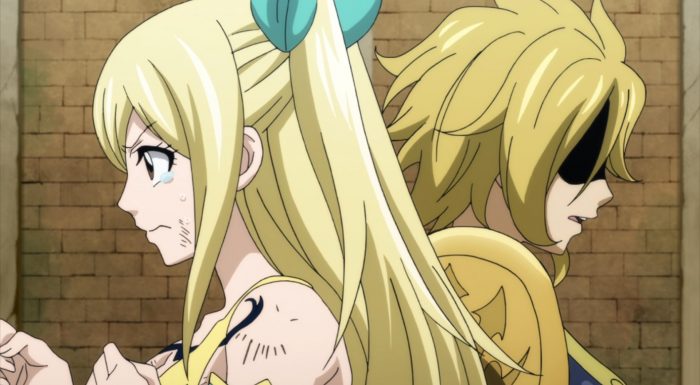 As Fairy Tail continues to truck down the thorny and odd route that creator Mashima Hiro has set for its final story arc, some of the story’s more controversial decisions are starting to make a bit of sense. The logic behind said decisions isn’t any more or less satisfying than the rest of the arc, but it seems like a lot of these character revivals and reuses were all made to set various things in motion. 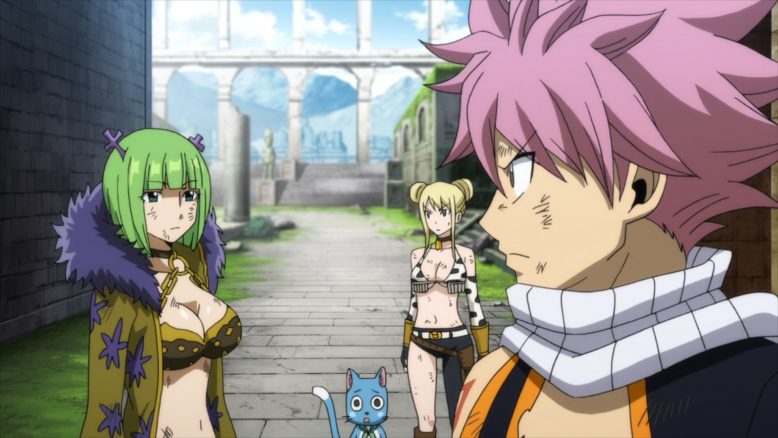 In essence,  its all a math equation of sorts. Character A needs to run into Character B, thus Character C is brought back to temporarily serve as a plot device to make that happen. Or, in Natsu’s case, Dimitiria and her whole disgusting display of torture, pettyness and madness was brought back just so he could power up into E.N.D.

Here’s the thing, I get that there needed to be a reason to restore Natsu’s “tumor” from earlier in this arc, but bringing both Neinhart and Dimitiria back for that seems like a horrible waste. Why not just bring some new character into play? Why bring back antagonists that were part of really powerful and emotional storylines from prior in the arc? 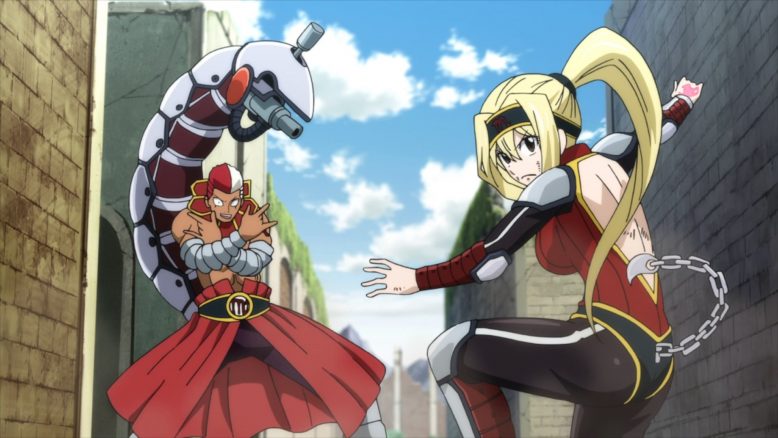 I get that Dimitiria is horribly over powered with her mastery over time, and I get that Natsu’s using his E.N.D powers to break through into her realm is a show of power, but it comes at the expense of everything that Shelia and Wendy did earlier. It also feels dumb to bring a character back into play only for Natsu to 1 hit KO her with his new powers.

The only silver lining I can really see in this episode and this whole affair, is seeing Lucy use her new Celestial Magic abilities and fight Brandish herself. That was really cool, and I would’ve liked to see more of her new found powers in actual battles. Having Lucy use said powers on Brandish when Brandish was clearly holding back and putting on a show? It kind negates all of Lucy’s immense growth. 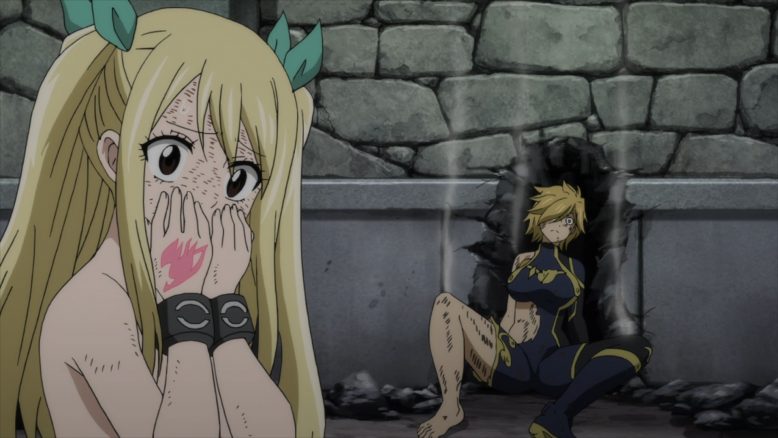 And if that weren’t enough, Dimitiria’s whole stripping/torture session was some of the franchise’s worst tendencies resurfacing. Thankfully, the scene wasn’t too long or as explicit as we’ve seen before, but it also didn’t need to be in there. We could’ve skipped to Dimitiria threatening to blind Lucy, and stay there, without anything else that was in that scene. It is what it is though, I suppose, and at this late of a game, I guess its kind of hypociritcal of me to criticize Fairy Tail’s fanservice stuff since I’ve given that stuff a pass in the past.

The problem, of course, is that those sorts of things used to be easy to look past, when everything else was good. Of course, with neither the storytelling nor the animation and battles being all that great, the negative parts definitely stand out even more than usual. 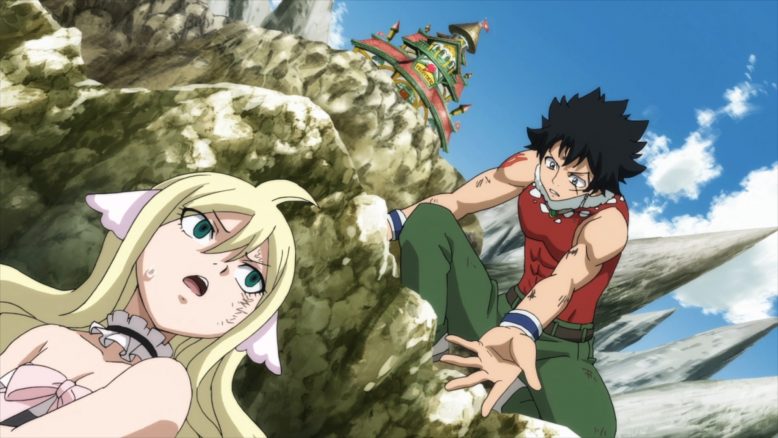 I’d say I liked the Mavis escaping from the Guild hall stuff, but its obvious that Mavis is going to lead Irene straight to Erza. Next week’s episode title kind of hints at that possibility quite strongly. And of course, it also points to that Gray vs Natsu battle that’s upcoming.

Disappointingly, it does seem like Natsu isn’t completely off the rails, and that now he just has a power up. I’m sure the new dark powers aren’t completely without their side effects, but what’s worse is that Gray and Natsu are just going to fight because well, Gray can’t forgive Natsu for being END. 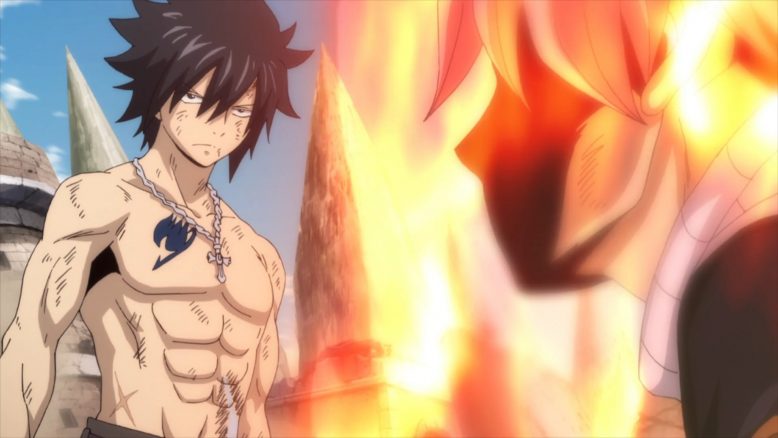 Which, I mean, having grown up with Natsu and been his friend for so long, you’d think Gray would know better. Natsu wasn’t really even sentient when he did the stuff he did, and I’m still not sure why Gray needs to kill END just because he’s “part” of the demons that his father dedicated his life to killing.

It regresses Gray’s character, but given how much the guy’s been run through the mud over the years, I suppose its fitting to have him go through another round of that stuff, one more time before the show ends. 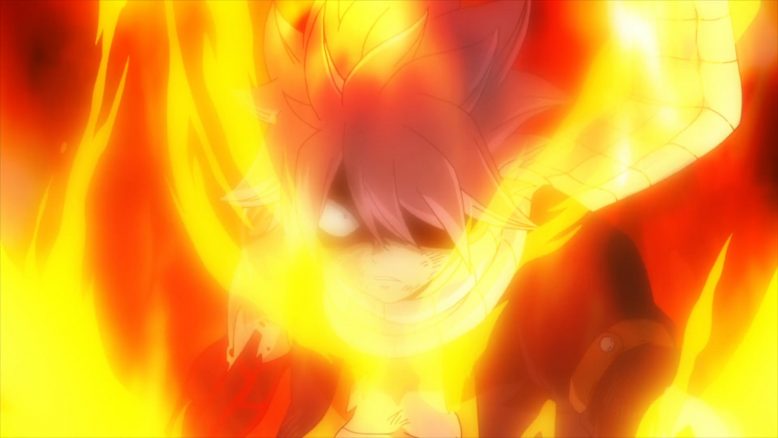 All in all, again, we’re not in a great place in this Final arc, and as more of Mashima-sensei’s baffling decisions start to reveal their intent, I can’t help but wonder about whether this really was him at his best. Mashima-sensei is a great storyteller, and he’s done stuff that is leagues beyond what we’re getting right now. Its just sad that at a time when Fairy Tail’s anime production is really missing the mark, the story itself that’s being adapted, is also at its weakest.