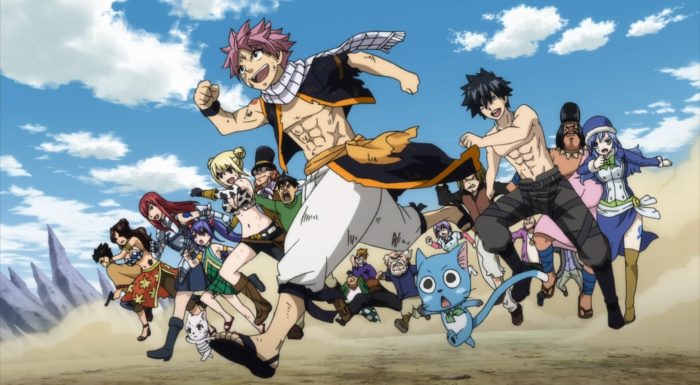 That recap at the beginning of the episode… It certainly doesn’t inspire much confidence in this show. After just 28 episodes, at what should be past the half way point, Fairy Tail’s Final Season is still dillydallying and doing a pretty bad job of keeping its own momentum going. 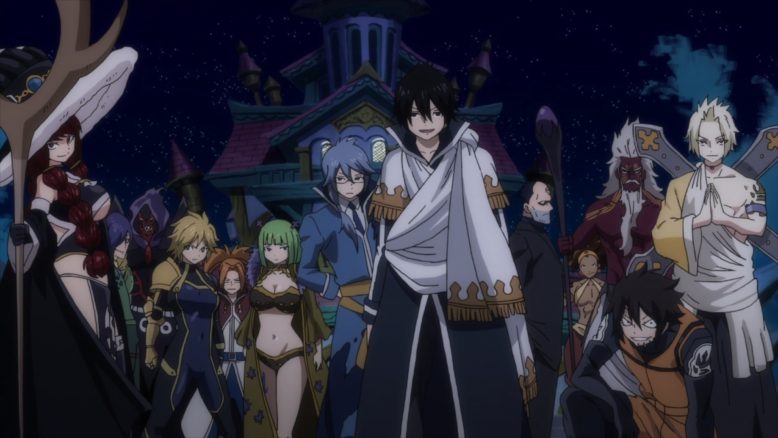 It says a lot, I think, that the recap this week (which clocked in at around 2 minutes), did not mention Shelia, the Historias or Gajeel’s battle/near death. These moments, which should’ve had more permanence and power, were more or less irrelevant to the overall story. Heck, The recap itself acts like the story is actually properly starting just now, with the war itself finally underway. It ignores, quite blatantly, that the war itself has been going on for quite a bit now.

I’m not entirely sure why the story got a soft reset this late into the game, but we are where we are. If that were the only issue we had to contend with as viewers, then I think we’d be pretty decently well off. No, the problem that continues to bug me is that the show is now exhibiting some of the worst traits of an possible anime series, let alone Fairy Tail itself as a franchise. 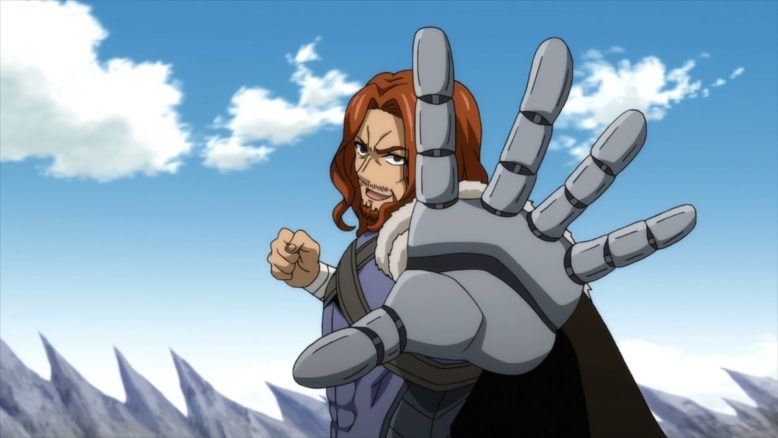 The pacing, is quite frankly, terrible. The show spent the entire first half of the episode, basically doing nothing. We got an insane amount of freeze frames and still shots, to the point where I was wondering if I was watching a slide show, rather than, you know, an actual ANIMATION. The whole moment with Gildarts coming in was more or less ruined, and instead the show decided to focus on showing us how Romeo (a very ancillary character in the grand scheme of things) developed some motivation and hope.

Not only did this scene add absolutely nothing to the overall story, but it actively reeked of delaying tactics. The show just couldn’t actually fill its 23 minutes of runtime with actual content, so we got a long, drawn out and tired scene that basically featured a bunch of still images, being either slightly panned or just rotated a bit. I’m not entirely sure where the issue is with Fairy Tail’s Final Season. Is Clover Works just a terrible animation studio? Do they not have enough of a budget? Or do they have to hit some arbitrary amount of episodes regardless of how much content they have? 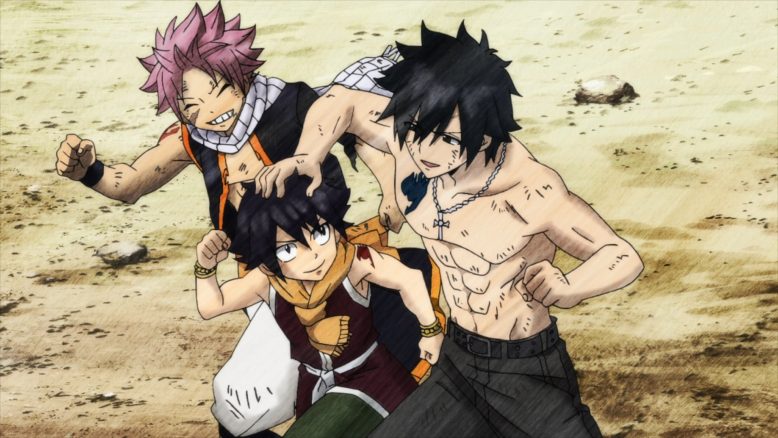 I don’t pretend to know the reason, but at this point, the show is half an anime series, and half a slide show of pretty art. Let alone good or bad animation, we’re just not GETTING animation in the show now. At this point, there’s even less of a reason for the show to exist. If its not going to ANIMATE the manga, then we’re all better off reading it. Yes the sound and the music help, but that’s NOT what the medium of anime represents. And this episode? It spits on the very notion of what ANIME and animation really are.

And that’s a pretty huge sin itself, which only adds the growing amount of strikes against this series. And Look, I don’t enjoy writing this stuff. I don’t enjoy spending every week writing about how bad this show is. Its not fun, and its seriously sapping my motivation to cover this series or blog anime in general. There’s a reason last week’s episode post is coming out the same week as this one, and there’s a reason why my posts are getting shorter and shorter. 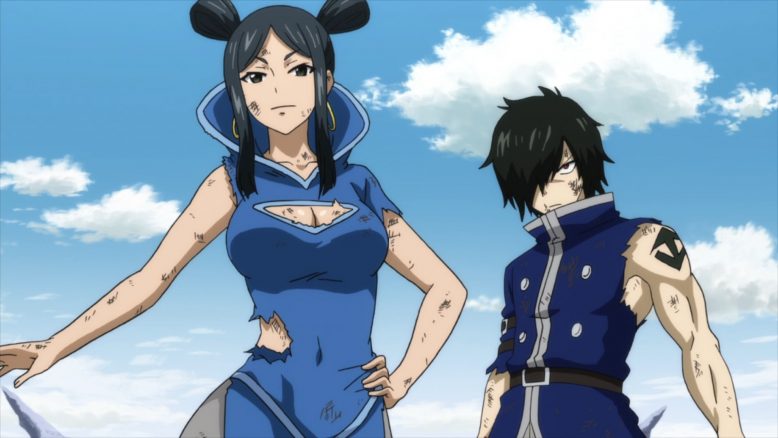 If this were any other series, I would’ve dropped out by now. The only reason I’m pushing myself to write about this show, and to cover it, is because its Fairy Tail, and even that is proving to not be enough any more.

More so than anything else, it just doesn’t help that the show’s production is killing what is an already weak story. I’ve expressed at length how much I’ve disliked some of the choices that Mashima-sensei has made here in this final arc, but, we have issues even when he isn’t doing something bad. 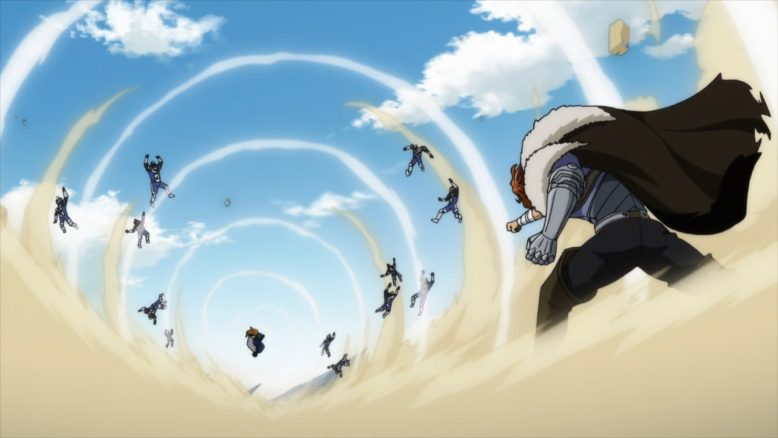 The whole Gildarts moment? It’s a cool moment. All we needed was to see Gildarts wreck shop with a cool, animated flashy attack sequence. That got ruined by the fact that the show just can’t animate stuff anymore. And then the story as a whole lost its momentum with all those still shots. And then… Then there was the Gray stuff.

I’ve spoken at length about how much I like Gray, and how many times the show and the story have done him a disservice. We’re at the point now, where Gray is in for a really seminal moment in the story. First, Gray is facing Invel, who is basically his better in terms of Ice Magic. Secondly, Gray has been trapped in a magic spell, that’s going to force him and Juvia to fight to the death. 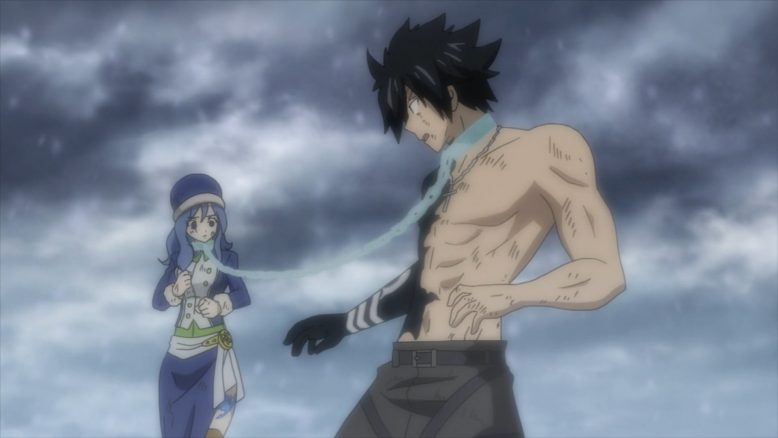 Now, we know that both Gray and Juvia like each other, so this tragic turn of events is pretty powerful. This moment? This battle? It should’ve been the focus of the episode, and we really should’ve only gotten a moment with Gildarts at the beginning and then should’ve exclusively been shown the Gray stuff. Yet… Most of the episode was just padded with still shot moments and check ins with characters that we’ve either seen, or don’t care for.

Which just… Makes this episode an example of how to NOT tell a story. Yes, The Gray and Juvia situation is interesting, as is the nod to Erza and Irene’s relationship. Those are cool story moments, but the show isn’t really at a place or a state where it can execute on or even present these ideas properly. There’s a strong amount of hinting that Neinhart is actually another weapon that Irene has given life. Which, well, that’s pretty darn sick and awesome, as is the fact that Irene doesn’t care a lick about Erza at all. 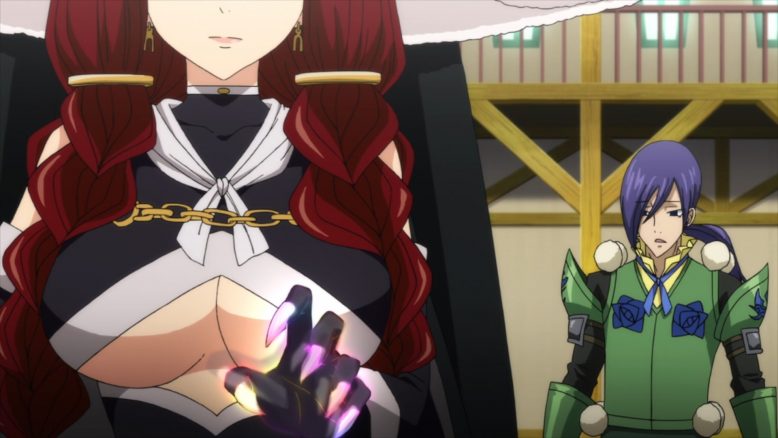 If she’s Erza’s mother or aunt or something like that, then well… That’s some seriously messed up stuff. It makes Irene kind of interesting. And really, this is the kind of stuff that the show needs to focus on and present to us. Its not doing that, so despite whatever cool ideas and story beats it does have, Fairy Tail’s Final Season is just continuing on its path to become nothing more than a gigantic disappointment.