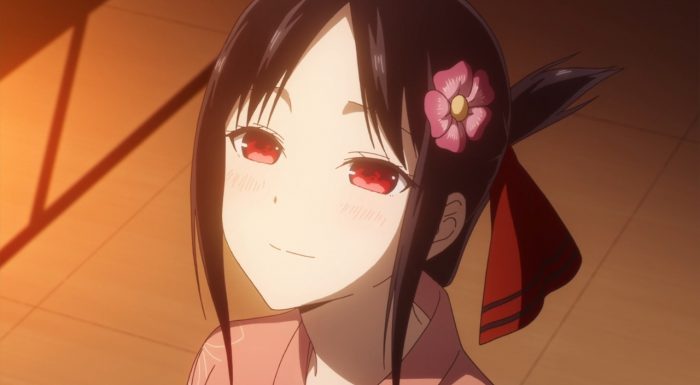 This is how you end a show in spectacular fashion. If anyone ever wants an example of how to make the last episode one of the best for a show this is the episode to look at. We got so much in this episode from the emotional character moments to some great laughs near the end. And it wasn’t lacking any of the wonderful style, music or direction that the previous episodes have had. They gave us everything from gut wrenching scenes of Kaguya crying to the firework scene near the end. That scene was really great in how we went from outside the car, to behind the group seeing the fireworks, to panning along their various expressions and finishing off with Kaguya. The only thing it was lacking was dropping a confirmed second season at the end of the episode. 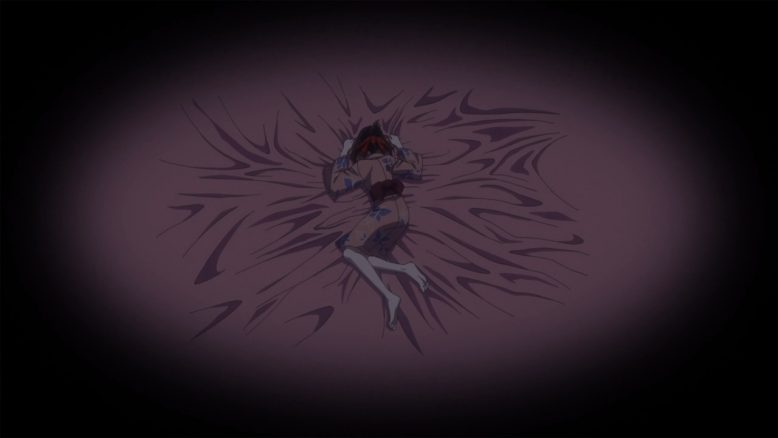 They built up the tension in the previous episode and made full use of it here. You could just feel Kaguya’s heart being ripped out when she wasn’t allowed to go to the fireworks. Yet again she was getting excited about something she desperately wanted and the butlers from the main house crushed her joy in an instant. It would be so easy to handle all of this lazier than the creators of this anime did. Just show Kaguya laying on her bed and play off her monologue. But instead we get nice style with the spotlight on her, before the writhing darkness taking over, back to Kaguya, and then to her flashbacks. So much is going on in various scenes of this show. 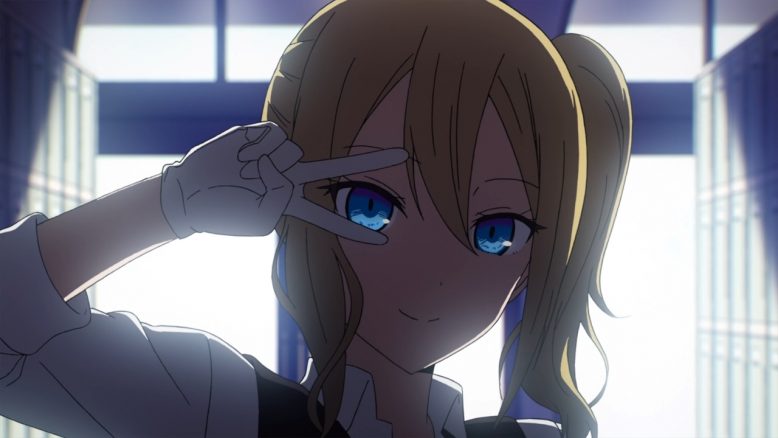 I’m presuming Hayasaka sent out that tweet in order to make her own plans play out. I didn’t see the polish or accessories on the hand handling the mouse, but it makes the most sense. Despite Kaguya being that emotional it’s hard to see her getting up to tweet that before collapsing back on her bed. Regardless you get to see how purely good Hayasaka is and how much she cares about Kaguya. She goes above and beyond here. We saw Hayasaka sending out the tweet so Shirogane knows to look out for Kaguya, wearing the disguise so no one will look for Kaguya, and even doing the prep work for escaping. It was even necessary to give Kaguya a push so she’d want to escape at all. Without a doubt she was a hero in this episode. 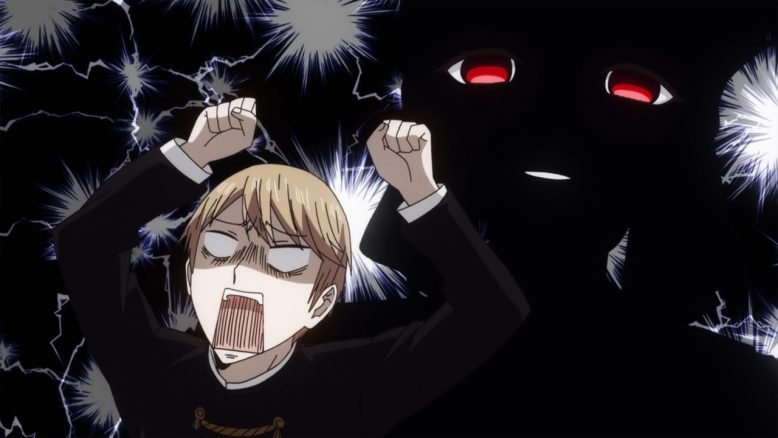 There is just so much to praise in this episode. The Ramen King stuff did get some payoff in this episode in terms of the Taxi driver having an identity. It was pretty fun with him gunning it to help the main cast get to see the fireworks in time. In general the episode was a spectacular roller coaster. You hit the lows of Kaguya’s hope being dashed and then it rises up when she’s racing through the back streets to try and make it in time. That in turn leads to her missing the fireworks and having her hopes dashed once again. You could just feel her desperation leading to the disappointment. No matter how much Shirogane feels embarrassed at his actions, he really was pretty awesome in taking charge and taking Kaguya to see the fireworks. If she wasn’t already in love, that would have done it. 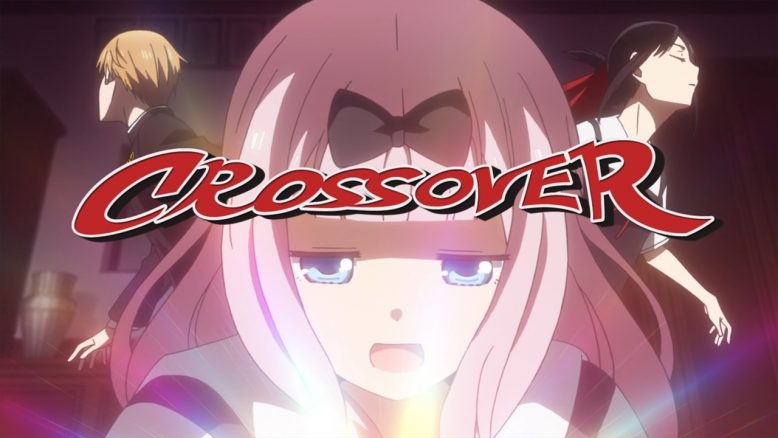 No complaints that we used the last part of the episode for some comedy. The first three quarters of the episode was so heavy that we needed some fun just to catch a breath. My condolences go out to Kei for having to listen to her brother lose his mind through the night out of shame. Also thank you Engrish for that hilarious “presented by Miyuki Shirogane.” That whole last part was pure joy in these two being so embarrassed that they were struggling to interact. I can’t blame Chika for thinking it was some kind of weird game with the number of times those two smoothly passed by each other. Those two are so into each other that it is purely hilarious just watching them. My condolences also go out to poor Ishigami who they shot down through no fault of his own XD. 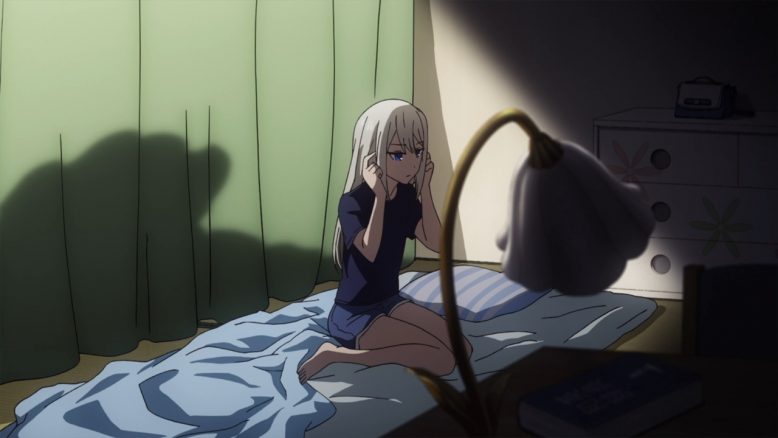 This was exactly the kind of last episode I’d hope for with this show. If they wanted an impactful last episode to pause the story on until another season then this was a great selection. We got to just dive right into Kaguya’s world and mindset in these past few episodes. This was a wild experience just about Kaguya going out with her friends to see some fireworks. But they built it up in such a way that it was intensely emotional and yet didn’t feel as if they were going too far. Kaguya has spent years trying to comfort herself and tell herself that she’s fine. But this trip was beyond important to her and the people that truly cared about her understood that. This show started strong and found a way to end strong. 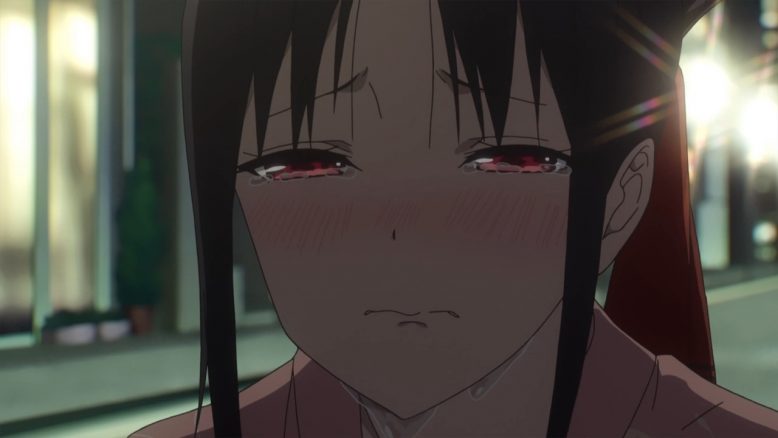 A difficult last episode for Kaguya

This show really did surpass any expectations I had going in. I was ready for a solid adaptation that was fun and had some great moments sprinkled throughout. Instead we honestly got what I think is a top tier adaptation that did everything it could to elevate already strong material. It wasn’t just a few good episodes, but a constant barrage of great episodes. I don’t feel this show ever dipped below being really good. From start to finish we got to laugh, cry, and find out more about these characters. I truly got to feel the passion and desire to make a great show that the staff behind this series had. They didn’t take the easy way out and constantly paid respects to the source material. They went above and beyond in finding creative ways to present the material.

We got so many strong elements put into this show. The OP left me unsure at first, but ended up being my favorite one of the season. The regular ED was really strong and we of course got the legendary Chika ED that I’m sure will sell many BluRay discs on its own. The music for both the emotional high points and just comedic moments worked extremely well. And of course the voice acting did a great job. The main cast were of course great and the narrator just owned this show when he needed to. With a show like this that relies on the characters to be funny, charming, and likable, I’d say everyone did a great job. 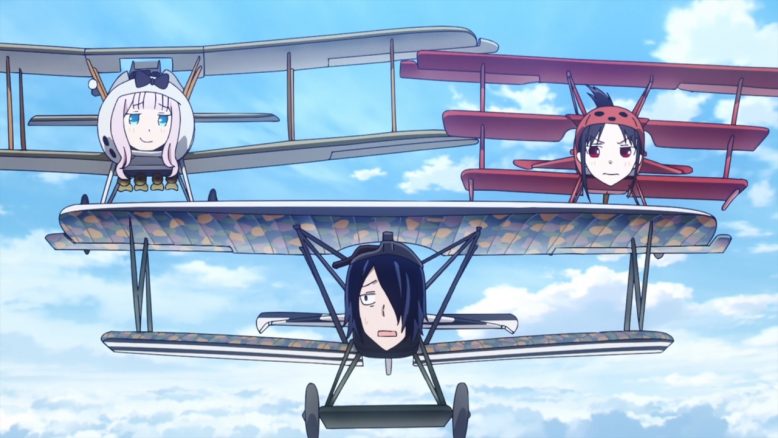 I’m honestly going to miss this show. Of course I’m fully confident we will see another season down the road. This show was too good and had too much effort put in for me to believe it won’t get a continuation. I’d fully expect this to be one of the more successful shows of the season. For now though will have to say goodbye to the franchise. There’s still the ability to write a full review for this show, but beyond that I can only wait patiently for more from this series. And of course I’m sure while waiting there will be a few re-watches in my future.