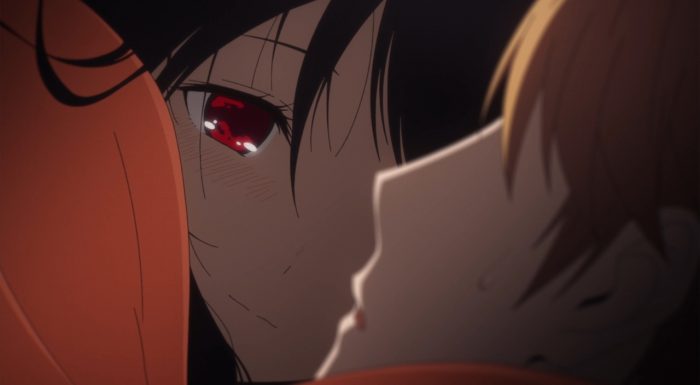 This episode was a nice and fairly continuous story. One of those times when each part of the episode nicely tied to the next. This more or less pulled the focus onto Kaguya and served as a chance to examine not only her character, but also even Hayasaka a bit and Shirogane as well. The first part was very much about the mind games we’ve seen throughout the show. Although in this case it really was Kaguya playing the game herself since I don’t think Shirogane ever thought about asking her for a ride. Similarly I don’t think she ever really considered that Shirogane might just ride his bike home through a freaking Typhoon! This was one time where Kaguya was kind of plotting on the fly. Shirogane talked later about what happens when you do things that don’t suit you. Kaguya thrives when she’s got prep time for plots. 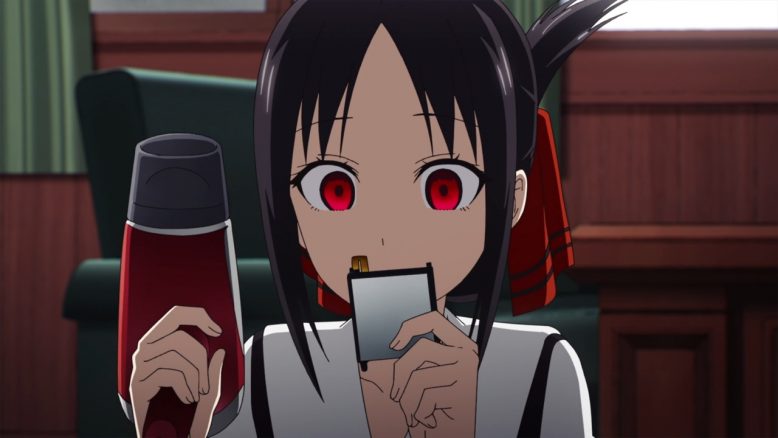 The first portion was both cute and pretty hilarious. For whatever reason I did get a good laugh from the divine retribution exacted on Kaguya. Apparently the universe was unaware that she had called a taxi for Hayasaka. But really it was kind of fun watching Kaguya try to work out a plan on the fly. She did work rather well at eliminating the chaotic element of Chika and her sabotage of his phone was rather…timely. I guess another part of the divine retribution was her wrecking his battery and resulting in him needing to buy a new one.

In general Kaguya was very cute throughout the first part of this episode. She did instinctively want to give Shirogane a ride, but was too caught up in embarrassment of making the offer. Kaguya created quite the hurdle to overcome in needing to suggest he could ask for a ride without making it obvious. Even without Chika things went outside her expectations. It does make sense from a viewer perspective though. This is a guy who was ready to go shopping with Kaguya despite the weather being terrible and waited for her in the rain. He’d be willing to risk safety in biking home if necessary. 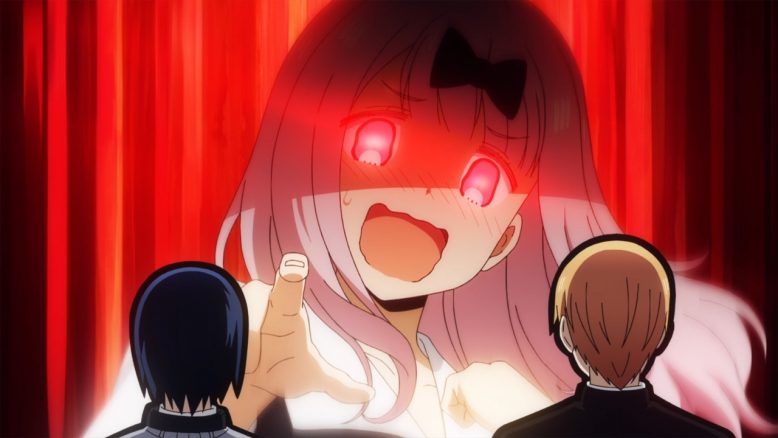 She wants to win!

The card game was fun in and of itself. Taking Kaguya out of the game (but making it very much connected to her) allowed for a rare Shirogane vs Chika matchup. Ishigami was there, but he didn’t want to win XD. Chika did get unusually hyped up and desperate for this one. And that is kind of funny since she’s pretty clever in her own right if she takes it easy. She had no issues winning the banned word game because she was herself and unpredictable. With Concentration she was very focused on plots and cheating. But I do get why. A sick Kaguya is so adorable that it would be agonizing to miss out. Chika couldn’t help but act just a little out of character. It wasn’t entirely out of character since she can be clever in other competitions, but she simply went a step too far this time. 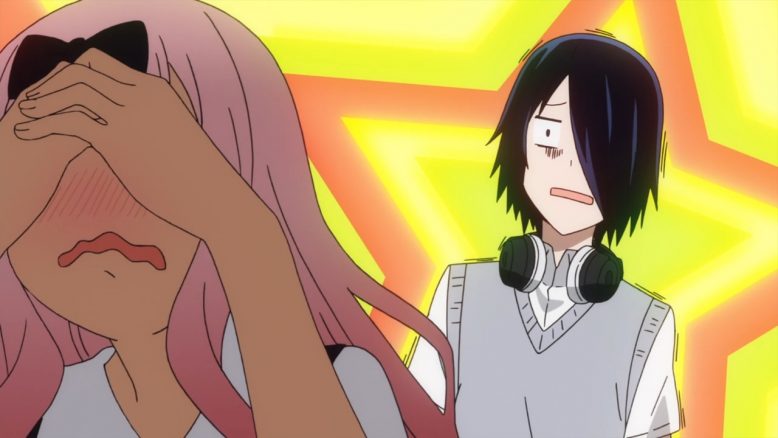 This did allow Shirogane to show his stuff a bit. He was able to see through and pick apart Chika’s schemes one after the other. But besides that it was good to see him step up when realizing he might have had a connection to her getting sick. His involvement is certainly true since he did blast past her at full speed and put her in the splash zone. But it was almost entirely Kaguya’s fault for her own schemes creating that situation. It was nice seeing him put aside his personal desires to see Kaguya and want to win because he felt bad. That sort of sense of responsibility is part of why Kaguya likes him so much.

And it was kind of hilarious seeing Ishigami just lay into Chika. It did reach the levels of “ok let’s back up a bit”, but at the same time he’s gone through a lot thus far. This guy has left multiple scenes in the show ready to die or seek psychological help. Much like he gets hit hard when saying or doing something stupid, Chika set herself up for this one. She cheated hard in this game and her cheats ended up being her undoing. Her adorable reactions and face when being called out were outstanding. Besides she’ll bounce back quickly enough. 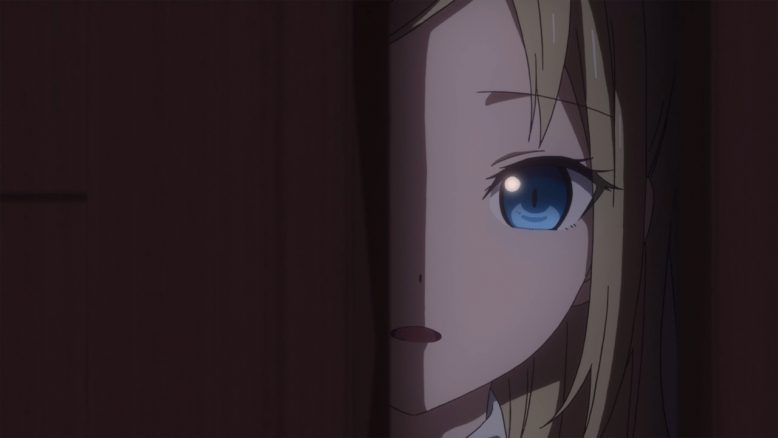 That visit to Kaguya’s place was gold. Hayasaka should get a gold star for episode MVP. She had great little shots like “don’t chicken out after coming this far.” If it wasn’t for her efforts then Shirogane would have gone home without ever visiting Kaguya. She even really went all out to try and move things forward a bit by leaving them alone together. You can debate whether that’s a proper thing to do or not…but it did lead to some great scenes. Sometimes you need an effective support to move things forward and Hayasaka really tried whatever she could. It’s possible she also wanted some time to herself after spending the whole day nursing Kaguya back to health. 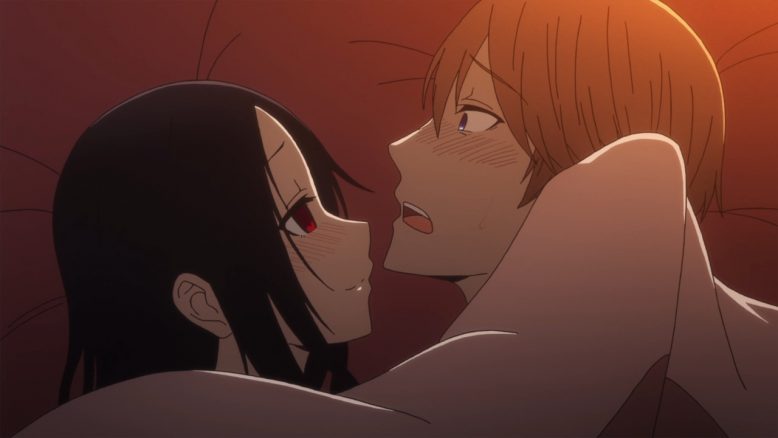 Everything about Kaguya and Shirogane during that visit was great. It was a good chance to dip into Kaguya’s mind a bit. Sometimes it is easy to forget how ingrained the Shinomiya family beliefs are in her. Kaguya just can’t bring herself to approach this courtship any other way. I’m sure on various levels she realizes that these mind games and plots aren’t the most effective way to end up dating the person she likes. But she just can’t break away from what she’s been taught her whole life. What we saw of essentially the Shinomiya creed on the wall beside Hayasaka says everything we need to know. You have things like “don’t rely on people, use them, don’t receive, but steal, and don’t love anyone.” That is what her family taught her. To get past that will take a lot of time, effort, and won’t be easy for her.

And yeah it did allow for some very cute moments between these two. Shirogane really had to muster his ultimate restraint to not take advantage of it. We even got a very rare “how cute” being said in reality by Kaguya instead of Shirogane just visualizing her saying it. It was a very physical and open reveal of how much Kaguya does love Shirogane. And you could say it shows how much he cares in return that he was so very much tempted, but restrained himself to simply falling asleep. It probably didn’t feel like a win for him since Kaguya chased him off, but it should be a valuable experience for him in understanding her. 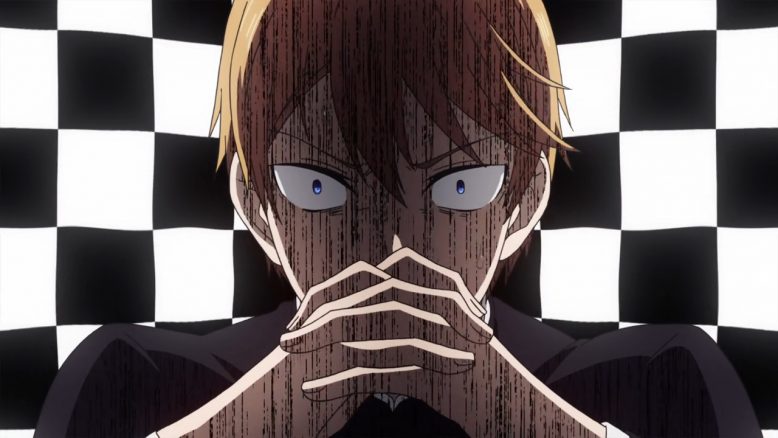 The last part of this episode made it a great one. Of course the comedy is key and I think the show does a great job there. I also like seeing any potential gains made on the romantic front between these lead characters. But the character moments such as we got in this episode is what makes it more than a comfortable show to a great one. You get such a better understanding of Kaguya and where her head is at after this and can imagine what kind of home life she has with those sorts of rules of living hanging overhead. Just a great episode for the show.