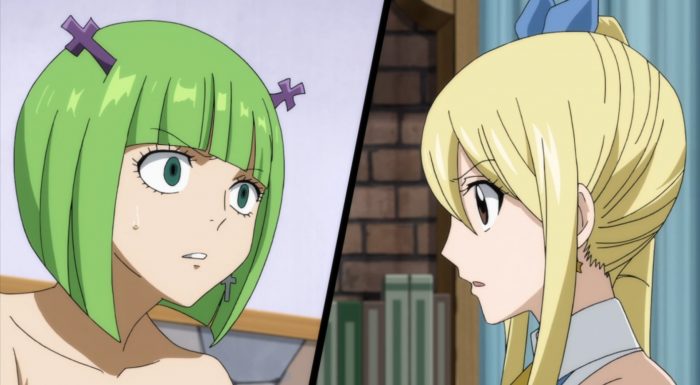 These days I’m left wondering; Is Fairy Tail’s final season just weak, or am I just jaded at this point? 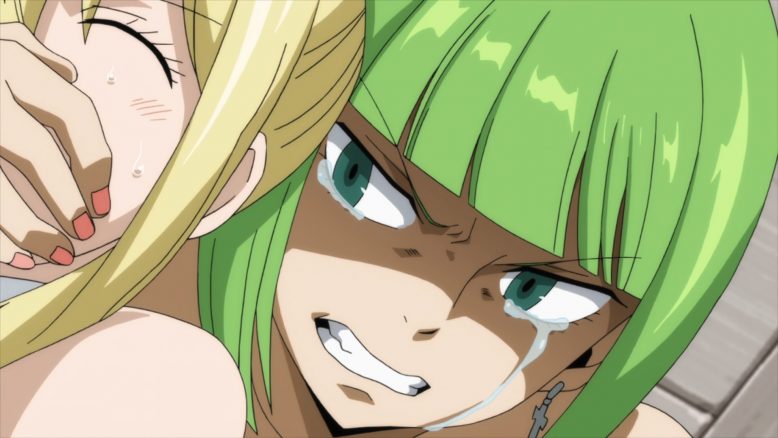 I’m still not entirely sure where the problem is, maybe its both myself and the show, but for whatever the reason may be, I’m just not connecting with Fairy Tail’s Final Season in the way I feel I should. There’s definitely interesting stuff happening each week, and even some moments where I’m genuinely surprised or excited… But the feeling of general engagement or interest just seems to wane after a few moments.

Last week I mentioned that execution was a huge issue with the show’s big moments, but this week I’m not entirely sure that’s the whole story. If anything, I think the Lucy and Brandish parts of this episode were fine. For the life of me, I couldn’t tell you how that scene could’ve been any better. Making it longer certainly isn’t the answer, nor do I feel like the story itself was super weak. Having Aquarious return from the dead and announce that her key had re-materialized was pretty darn sweet and unexpected. 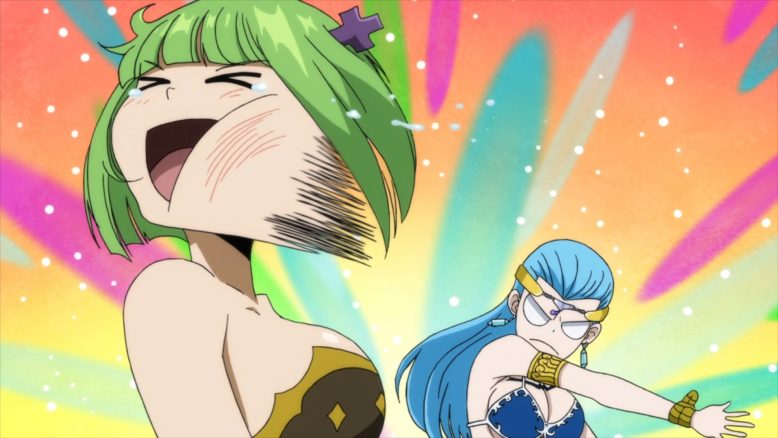 If anything, I could’ve done without the excessive Lucy/Brandish fanservice shots, if only because it just didn’t fit into the tone of what was being told here. The story was about Brandish and Lucy’s mothers and the tragedy that had happened between them. Having Brandish act like an idiot before with Aquarious, or having her leg lock Lucy with barely a stitch on? I dunno, the lewd nature of the shots and the poses definitely detracts from a story. I can tolerate fanservice, and God knows I’ve given this show and franchise a pass on that stuff more so than I probably should have, but I can’t ignore it when it actively detracts from the emotion of what’s happening on screen.

In the end, I guess I just didn’t know Layla or Grammie enough to really feel anything when either of them died. These aren’t characters that we’ve grown to know, and we’ve only heard about them from other characters. Lucy likes Layla because she was her mother, and Brandish cared for her mom as well. But even Brandish I think, needed some scenes or flashback moments to really sell us on how her losing her mother had driven her to become who she is now. 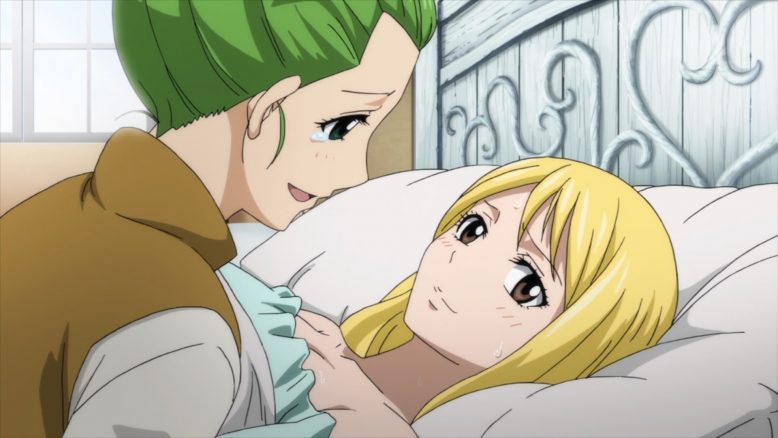 In a show like One Piece, which I think  nails the whole “tragic backstories” stuff, we’d get an episode or two of solid development for Layla and Grammie, and perhaps even Brandish, before the story would hit us with the tragic death scene. Here? I think unfortunately the whole Layla/Grammie deaths as a result of a twisted plan that Anna Heartfillia made several centuries ago, is left as little more than a neat idea.

Again, I think its the execution that suffers here, but it all doesn’t work because there’s just not enough time or effort dedicated to really sell the idea itself. Its a good idea, its a solid story, and its interesting to learn, but I think shows like One Piece, Naruto and even newer stuff like Boku No Hero Academia have spoiled me a bit. I think I expect more from a shounen show now, and that may be why Fairy Tail’s latest efforts feel a bit underwhelming and hollow. Gone are the days of something like Fairy Tail Zero getting a whole cour of anime airtime to have us like Mavis, and now we have what we have here. 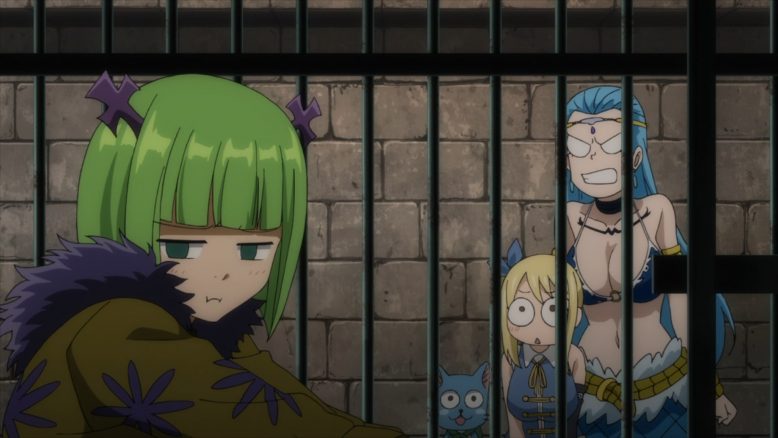 Plus I think the whole conflict between Brandish and Lucy is resolved a bit too quickly here. Brandish ends up saving Natsu, who develops a “magic tumor” because of his overexertion against Zeref. And again, this whole scene with Happy coming in and bringing forward a near dead Natsu is just… Over too quickly.

We don’t see anyone, even Lucy, really come to terms with the fact that Natsu may very well be dying. If Lucy actually does have romantic feelings for Natsu, then it certainly didn’t feel that way this week. Sure, Lucy cries for Natsu when she can’t feel a heart beat, but I feel like she would’ve cried for any member of Fairy Tail in the same way. And look, I’m starting to realize that the Natsu x Lucy Pairing is actually not going to be officially confirmed or dealt with in Fairy Tail cannon. 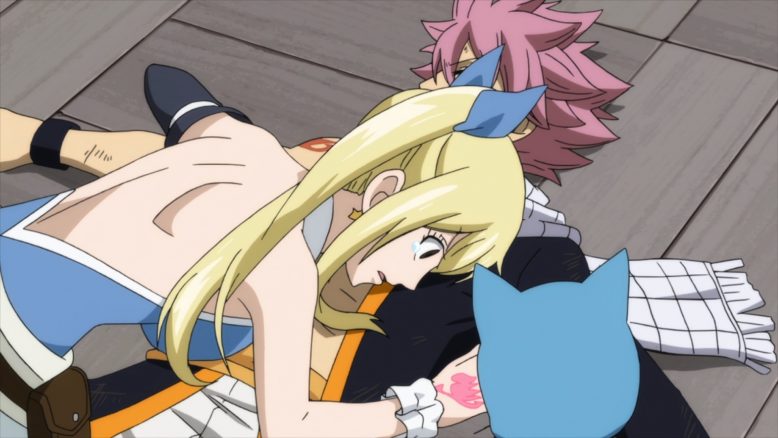 Unlike say Groove Adventure Rave where the central romance was actually given some attention, it seems like Fairy Tail is a traditional shounen through and through. I fully expect Natsu and Lucy to remain friends or something, but go their own separate ways after the show wraps up. Which, is another disappointing element of the show, because it makes this arc feel even less “final” than I initially thought.

What am I getting at exactly? Well… This show and arc is actively setting up future quests for various characters to go on, once this all said and done. Lucy’s whole goal of finding Aquarious’s key is nice and it certainly gives her something to do once she’s done with this whole Zeref battle, but it doesn’t suggest finality. No, to Lucy and even Natsu and Happy, there’s more stuff in the future still, and if anything, this latest battle with Zeref is nothing more than “another hurdle” to overcome. 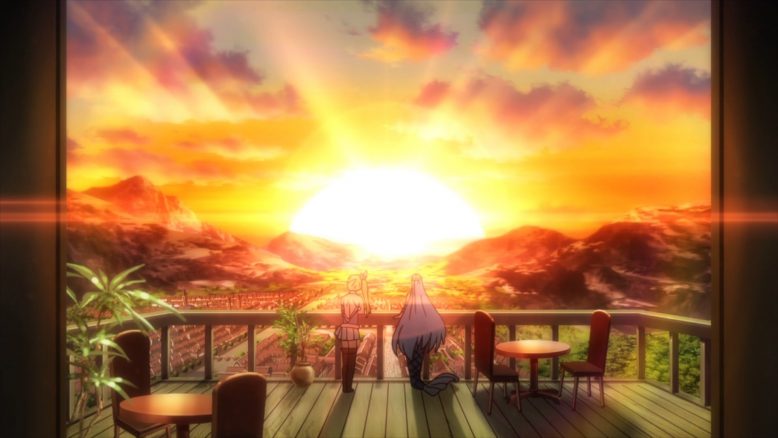 That’s not the sort of feeling you want to get from an arc that’s supposed to scream “final”. In fact, I feel like the Tartaros arc felt more serious, dangerous and final than anything we’re seeing here thus far. The resolutions and story beats we’re getting here feeling like little bonuses and asides, rather than real building blocks towards an ending.

Which I think, at the end of the day, is what my issue is with this “final” season. It doesn’t feel final enough, it doesn’t feel like its driving towards some big finish. All it feels like is a sort of “Spring cleaning” of dangling plot threads. Who is Zeref exactly? Answered. Natsu and Zeref’s relationship? Answered. Lucy’s connection to Brandish and her family’s connection the larger story? Answered. 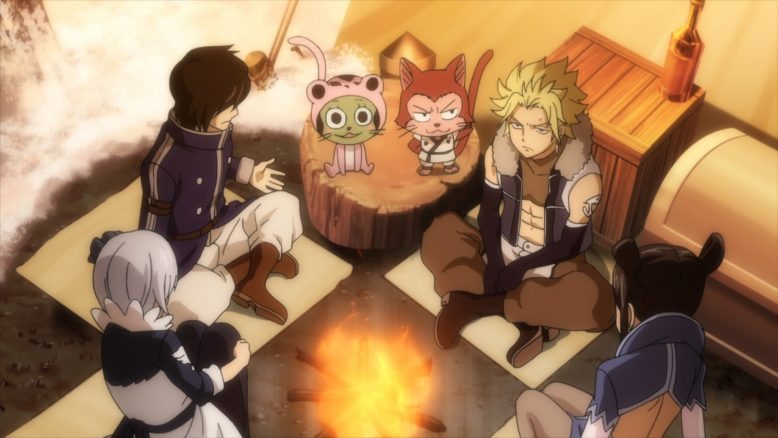 And look, its not like those answers aren’t interesting and well done answers, because they are. But if said answers aren’t driving to a larger point, in what is supposed to be the final part of the story, then it can’t feel cohesive or “final” (for lack of a better term). As we truck on with the story, I’m finding myself growing less and less excited about what’s coming up next.

On the other fronts, we’ve got all these characters fighting all these battles, but if you’ve seen the opening, then you have a pretty general idea about how most of these battles are going to go. The spoilers in the opening aren’t the issue, the issue is that these resolutions and directions in general don’t seem all too interesting. And unfortunately, from what I’ve been reading and hearing online from manga readers, this final arc of Fairy Tail does drop the ball pretty considerably, which isn’t all too good of a sign. 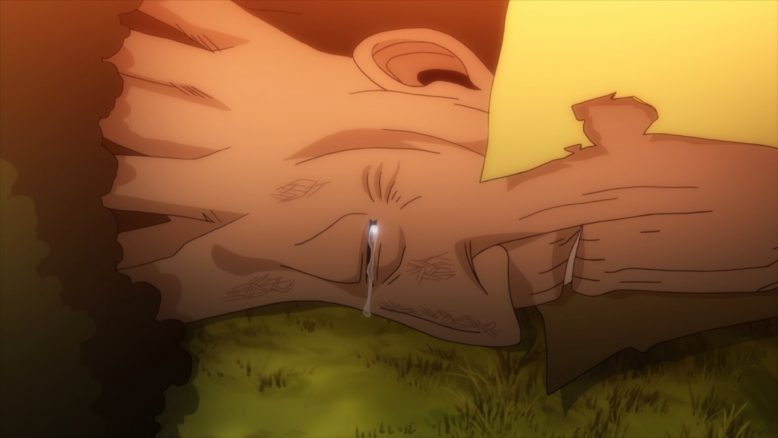 At the end of it all, we’re approaching the first half of the this series, if it is indeed 50 episodes, and I’m really just wondering when the show is going to really wow and impress me. I’m holding out hope for the fact that that does happen, but as it stands right now, things are “average” at best.