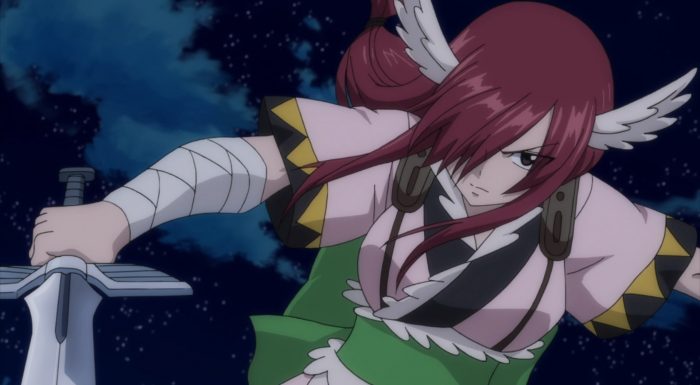 After what seemed like a really rough start, the latest and potentially last arc of Fairy Tail as a whole, is starting to get into a good rhythm. I suppose both the show and Mashima-sensei are asking a bit more of their audience than they usually do, i.e to not worry too much about how we got here, and just enjoy what we’re getting as we get it. While I think that will cause issues for this arc when its looked at as a whole, I do believe that, at least for now, we’re at a particular level of storytelling that I can not only enjoy, but get behind. 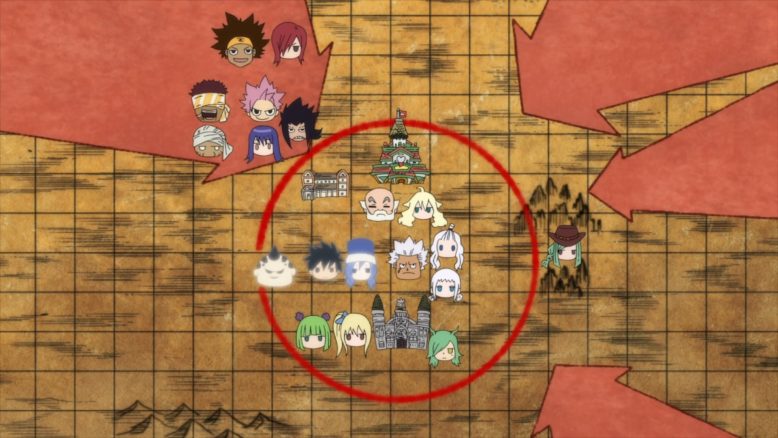 What’s most fascinating about this week’s episode is that it predominantly features one of the franchise’s most worrying traits; the tendency to cover a lot of different perspectives and locations all at once. I remember when the show did this in the Grand Magic games, and it was terrible. The story became hard to follow and it definitely seemed to lack focus. There have been other instances of this unfocused approach as well, but I think both Fairy Tail the anime series and Mashima-sensei the mangaka have finally grown to be able to do this sort of thing well.

The diagrams, ripped straight out of a One Piece episode certainly help, but I think its because at the end of the day, there was one central focus to this episode, despite the other segments and characters getting some mention here and there. The focus in question? It was Erza versus Ajeel. This was the main event that the episode worked to resolve, and I’d say it was this battle, that was more or less satisfying even if it was a bit shorter than I would’ve liked. 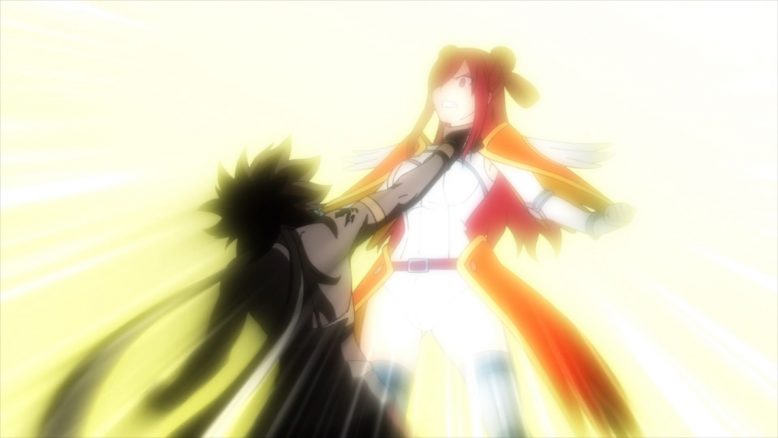 I miss the days when Fairy Tail would take half an episode or even a full episode to focus on one particular battle. We’d sometimes get filler segments or extra information from the anime, in order to keep the pacing immaculate. We haven’t gotten that level of attention from the show since the very first season, but I think what we got here at least worked on the two fundamental levels that it should have.

The first level, was basically convincing us that Erza COULD defeat Ajeel, despite the enormous gap in their power levels and abilities. Now Erza, as a character, has become notorious throughout Fairy Tail’s run for being a character that just wins because she has to. There’s rarely been any logic or reason to her winning her battles, other than well, something intangible like “The power of friendship” or well, just her plot armor. 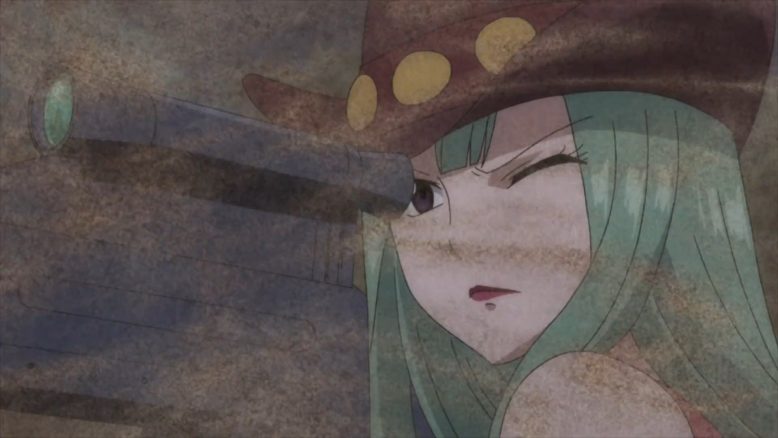 This week, however, Erza won because she not only used her head, but because she had help. Erza using the elements that directly oppose Sand was a good idea, and one that I believe at least switches the fight in her favor. Back in the early days of this franchise, Natsu would often think outside of the box and use his noodle to find a way to over power the odds. Its something we haven’t seen in a while from this show, but it IS how the characters used to defeat and conquer insurmountable odds. Natsu eating Ehterion for example, was something a long the lines of what Erza did here.

And of course, while Erza had the right idea, she couldn’t exactly overpower Ajeel’s insane magic power with just her two swords. That, is where Bisca and the friggin Jupiter cannon came in, and where I think this episode really sold me on Erza winning. Erza using one of her equipment armors to basically shine a beacon for Bisca to aim at? That was clever, and as strong as Ajeel is, taking a friggin blast of Jupiter straight to the face is bound to inflict massive damage. 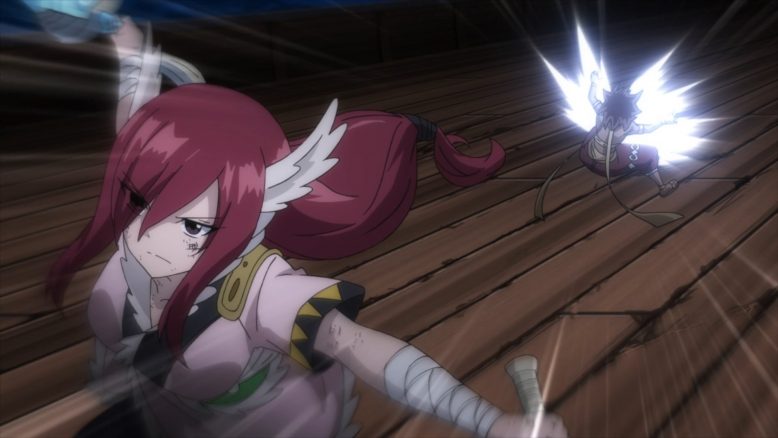 But heck, even before all of that, we had to have Lucy, in a completely different area, crush Marin Hollow and his spatial powers in order for Erza to even use her own abilities. That brings us to the second level of care in this week’s battle, connecting it to other ongoing events properly. The battle between Erza and Ajeel has consequences in the grand scheme of things, which is something that we don’t always see with this show and its battles.

And moving back to Lucy for a second, I was surprised at how quickly the show dove into her thing with Brandish. It seems like Brandish knows Lucy’s mother, and that there’s some history there. Of course, we don’t get much beyond an initial stand off between the two in a bathtub at first. I loved this scene, even if it was a bit of the fanservicey side, because it showed us how much Lucy has grown as a character. 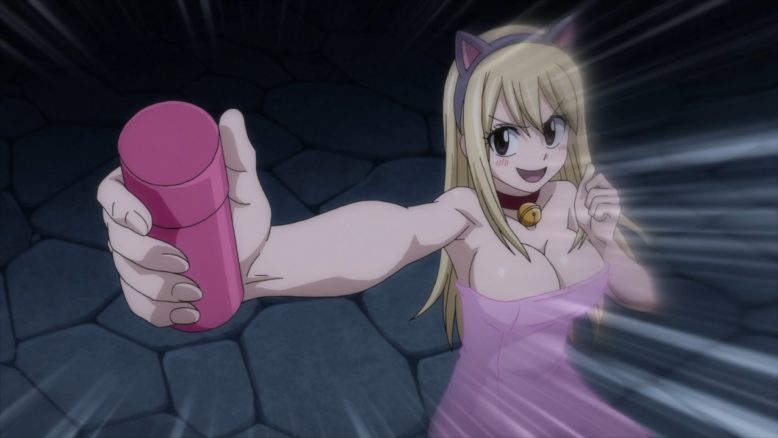 In previous arcs, Lucy would basically be taken aback by unreasonable circumstances and have to basically run around or escape bad situations, only to be saved by another character later. If you remember Tenroujima, then you remember the episode where Lucy has to run away from a certain character quite a bit. Its common, therefore, for Lucy to be toyed with and even be the butt of some mean spirited jokes.

Yet, this week, while she plays along with Brandish’s unreasonable “get in the tub with me” demand, Lucy is always looking to get an advantage for herself. Whether its trying to stab Brandish with her broken Aquarious key, or when she actually grabs the container containing Marin and then later takes him down as a result. Lucy uses her wits and thinks quickly under pressure to gain the advantage. 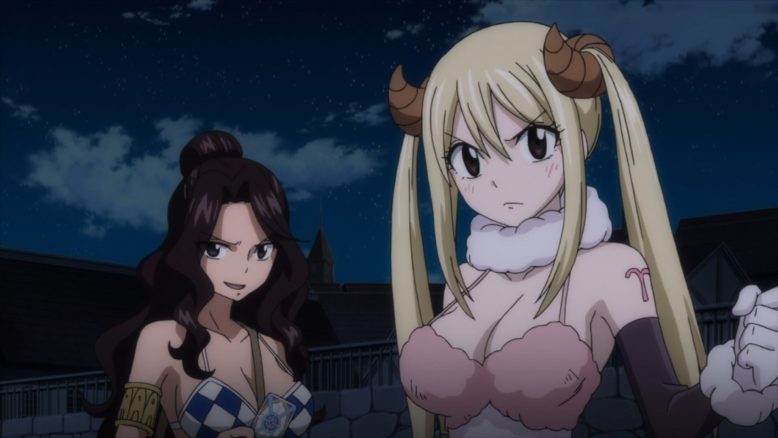 Thus, Cana coming in to save her is a nice bonus, but not something that Lucy actually needed in that particular situation. Which, again, was both satisfying and really nice to see. If this show has done one thing since it came back, its shown Lucy in a really positive light, and its the kind of growth that is just great for long time fans of the character and the franchise to see.

Beyond that, I’d say the rest of this episode was fine, but not anything to write home about. I did chuckle a bit at Happy whole thing about Natsu thinking ahead, but the moment later wher Charla kicks him off screen as she actually does some of the fighting, was a bit sad. I really REALLY want to see Happy actually fight as well, and it feels really bad to see him be the only Exceed that hasn’t grown enough to contribute in the same way that Charla and Lily have. 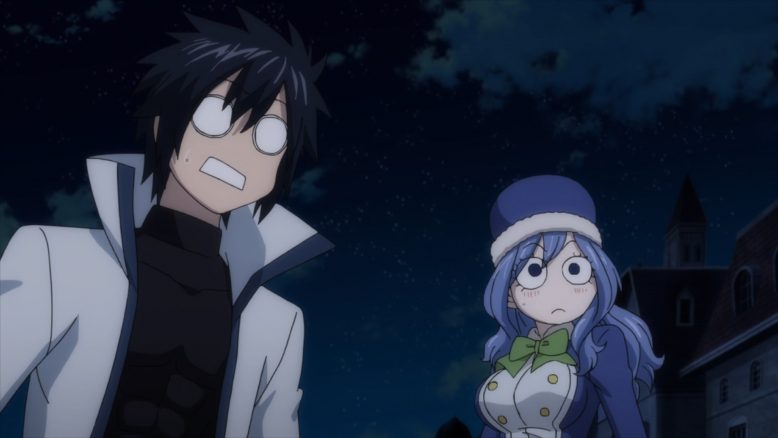 The other characters like Gray and Juvia or even Mavis and Makarov, haven’t really gotten their particular focus yet. That’s coming I’m sure, but I do have to say, despite what was a pretty dumb episode last week, this episode delivered not only the character moments and the action, but the logic that’s been sorely missing from this show as of late.

It was just great, to actually talk about plot and character things this week, and while it was mostly highlighting the positives, I’m looking forward to the point where I’ll be able to speculate about things like I used to with this show. A part of why that hasn’t happened yet is because some of this arc’s story was spoiled by a jerk in the comments last week. 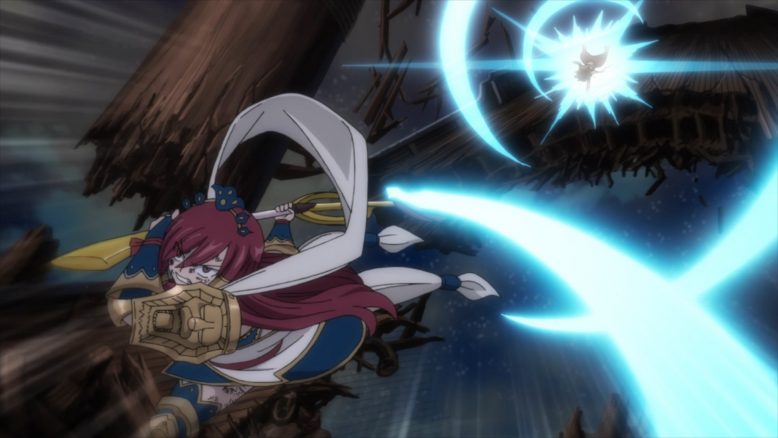 And because of those spoilers, I really implore those of you who have read the manga to keep manga spoilers out of these comments. I haven’t read the manga (even though I own a good chunk of it) and I really do want to experience the surprises and story beats of this show as they come out. I waited quite a while to see it all animated, and I hope that anyone who’s ready and enjoyed either the manga or the anime, will respect that.

Because in the end, despite whatever reservations I had last week, I did and do expect Fairy Tail to deliver with its final arc. If this week’s episode is any indication, then I think that’s a safe bet to have.