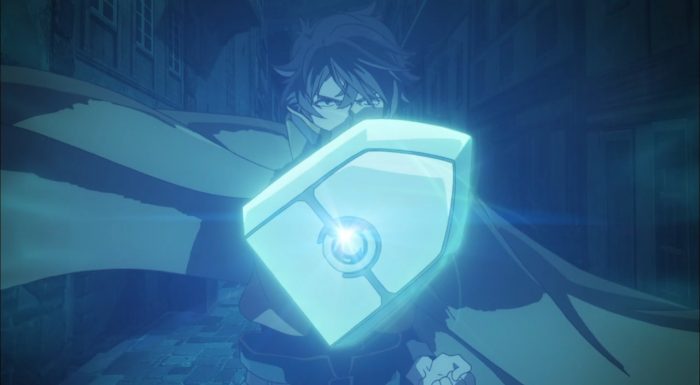 I’m happy when shows that need a big first episode actually get it. This is the kind of show that you can’t just have a normal length first episode and expect to draw people in. The only choice really was to either rush the first episode like crazy or double the length of the first episode so it can end on a solid point. I’m glad they went with the latter option here. The betrayal that Naofumi suffered only really hit in the second half of the episode and would have been completely missed if they just had a normal first episode. Instead they managed to capture major elements of the story and get across just where the main character is to start this journey.

It does make me wonder what is up with this setting and their disdain for the shield hero in general. What is up with that? Maybe all these guys came from worlds where games are different, but tanks are valuable. You need guys to take a hit so the main damage dealers can survive to do their thing. Also do none of these worlds have our superheroes as entertainment figures? One would think in today’s world people wouldn’t hate on shield characters with a superhero like Captain America getting big movie appearances. But regardless I’m curious to see if it’s just a stupid hate for a non-offensive class or if there is a reason these people don’t like shield heroes in general. 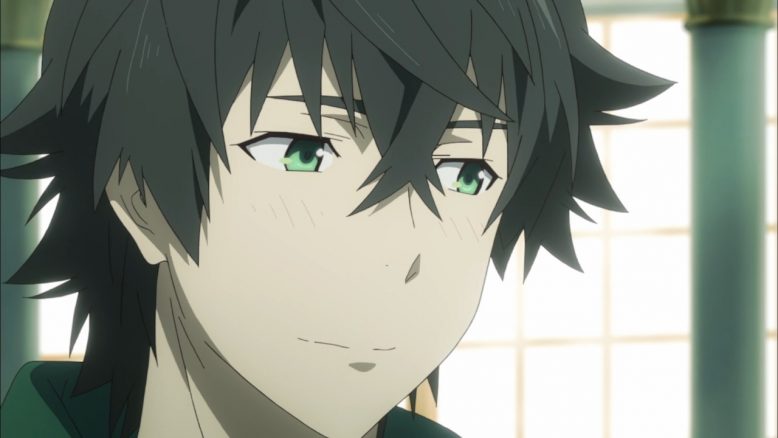 Naofumi’s descent does feel pretty darn rapid, but in some ways I get it. In a lot of ways I think it is hard to tell how a person will react to a situation until they experience it. Naofumi started out a pretty trusting and decent person. He was a bit weird in his own way, but tried to stay optimistic. The betrayal was an intense one for him to deal with. Not only was he tricked and essentially robbed, but also it was rubbed in his face. While I’m not sure most would go to the extreme of believing it was a grand conspiracy, I can get how his mind put things together. Regardless I get that he felt angry, frustrated, and trapped. His excitement turned to ash in an instant. He’s essentially trapped in a world that hates him and can’t leave until these waves are defeated. 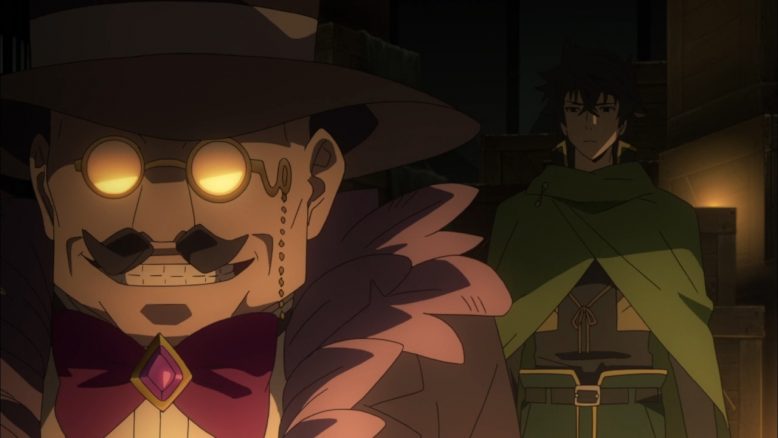 And certainly a controversial angle is going to be tackled here with slavery entering the mix. Somehow I’m not surprised that this country Naofumi is in at least accepts slavery on some level. But the bigger thing is that our protagonist looks to be ready to jump in on that. Although I utterly get why. He’s gone utterly to the other extreme from where he started. Naofumi just doesn’t trust anyone. The point about the slaves being magically ‘cursed’ so they can’t betray would make them unbelievably appealing. In a sense the guy making the offer is completely right. This is exactly the kind of service that Naofumi needs. He can’t get stronger because he has no way to deal damage. But his reputation is in tatters and even if there were decent people wanting to help him…he can’t trust anyone.

Of course that does lead to the main issue of slavery being just horrific. You don’t need to be a history expert to see the terrible things people have done to each other. In terms of this show, it just depends on what evils can the viewer accept. If Naofumi does walk away the slave industry continues regardless. And he sure as heck isn’t in any position to try and create a revolution to abolish slavery in that world. Of course if certain crimes were suddenly made legal I wouldn’t suggest anyone actually start committing terrible acts. I’m willing to see where things go at least. If he jumps in then this is another step down for Naofumi. How far down will he go before he rises up again? Can he be a decent main character despite stepping into this area? 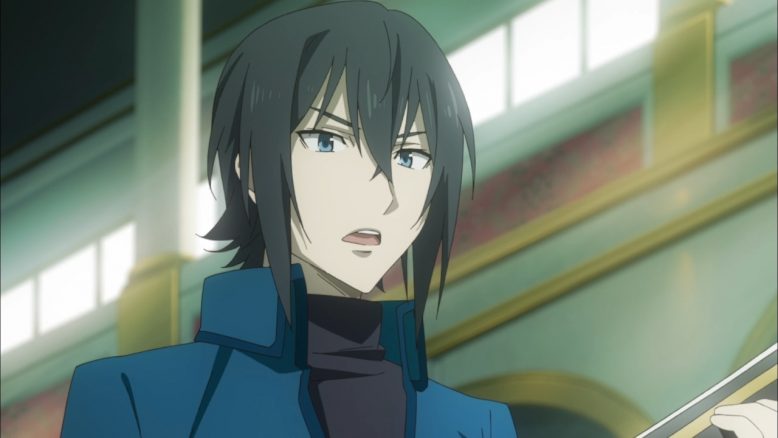 One curious thing though is how all these guys appear to come from different versions of Japan. I’m not sure what to make of that or why that is the case. What need would there be to take people from different alternate realities? Regardless it does allow for some odd behaviors to make sense. While all these guys are human and all presumably from Japan, what makes up common sense for each might actually be drastically different. I do find the other three heroes to be a bit too arrogant. Who honestly gets summoned to another world and starts barking orders and making threats? Yeah, people are asking you to save them, but what if they are currently stronger than you are now? Who really wants to pick a fight like that right from the start? But maybe that’s just how people are in their versions of Japan. 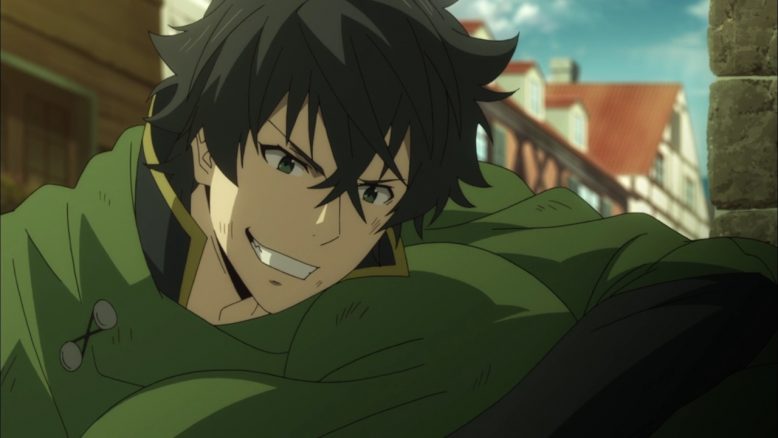 It will be interesting to see how things turn out with this show. In some ways the show appears from the start as a pure revenge story. At least I’m sure Naofumi would love to stick it to the people that betrayed him. But in other ways it might be more of a redemption or healing story. Naofumi is in a bad place right now emotionally. He’s cold and untrusting of anyone who approaches him. As much as he needs to survive this situation and even get some payback…the man needs to heal. Even if he can survive like this he won’t really be living until he can regain some more positive emotions and put his trust behind someone. When or if that will happen is up in the air though. 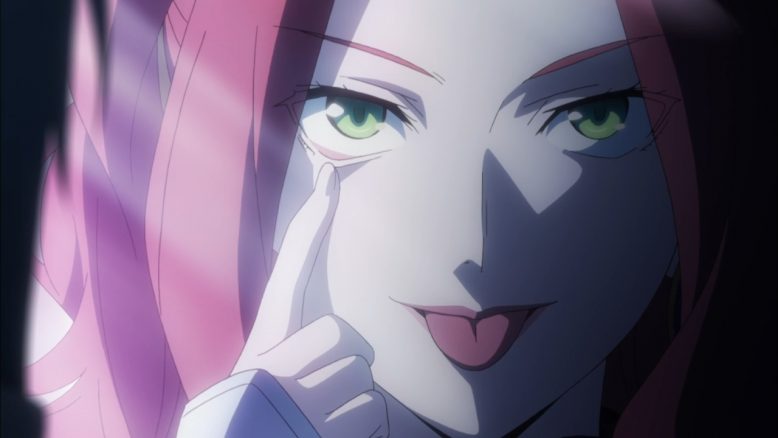 People can suck at times

I’d say this was a good first episode. We got introduced to this world and in general the tone of it. It isn’t a pretty place that Naofumi was dropped into and he’s honestly been tainted by it. Where he goes from here will be critical. Although clearly with him seemingly intrigued by the idea of getting a slave in place of an adventuring party member, the guy has a long road ahead. Things may get worse for him just in terms of what kind of person he will become before it gets better.

in Tate no Yuusha no Nariagari