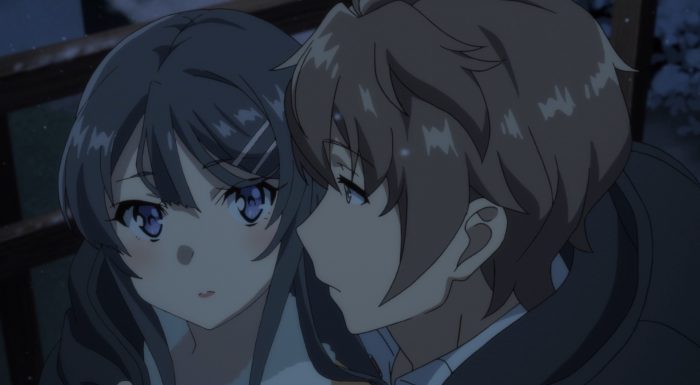 And so this story has come to a close. I’ll say this episode did a good job keeping me surprised about what the focus was going to be. It wasn’t certain where the focus would go exactly, but it probably went exactly where it should. In a sense Kaede’s situation was resolved and over. She may regain some memories over time, but for now she’s alright. Her issue was about the intense situation that lead to her body damaging itself and her memories being lost. When her memories returned it was just a slow process for her dealing with the fact that she’s been ‘gone’ for a couple years. She doesn’t even realize at the start that anything has happened. The one who was hit hardest and who the show needed to focus on was Sakuta. Bringing it back to Sakuta and Mai was likely the proper direction. 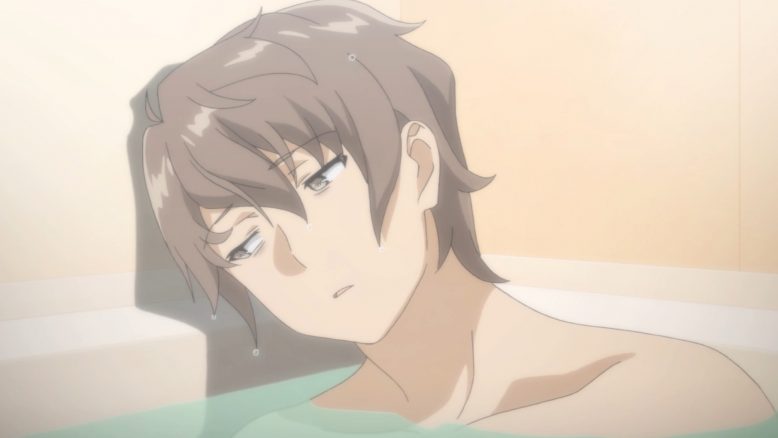 As much of a gut punch the last episode was for people, there’s no doubt Sakuta took the hardest hit. He hung in there as best he could for as long as he could. He even did his best to not break down in front of his family. But of course he couldn’t avoid breaking down. While the old Kaede returning wasn’t a disaster, it did come at the cost of the sister he’d been living with for the past couple years. That kind of loss is devastating.

And really it showed the gap between Sakuta and his father. His father of course was just crying tears of joy. This was what he’d been waiting for. He’d waited for his daughter to return. It probably didn’t hit him at all that the cost of that was a different daughter had to disappear. He never got attached or too close to that Kaede. And that left Sakuta painfully isolated. And it all coming at the worst time with Mai away at a shoot. 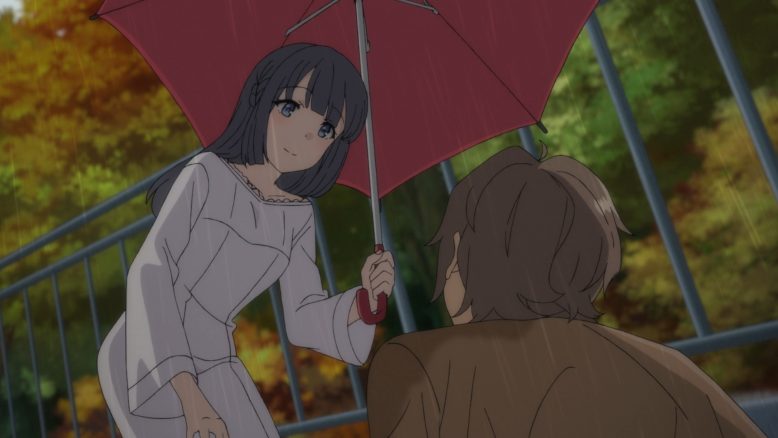 You have to wonder if the older Shoko is Sakuta’s guardian angel or something. She literally appeared in his moment of need. At his lowest point this girl just appears to help save the day. And yeah for the sake of avoiding his mental condition being questioned it was for the best to take him home and hope the injury clotted on its own. Although I suppose Futaba still ends up questioning his sanity anyways. Now I don’t think she is a figment of his imagination since otherwise it’s a remarkable coincidence how similar the middle school version appears and that he somehow got a note left in his school locker some episodes ago. Regardless of what is going on with Shoko she did help save the day. He just needed someone there to support him and remind him of what he needed to focus on. 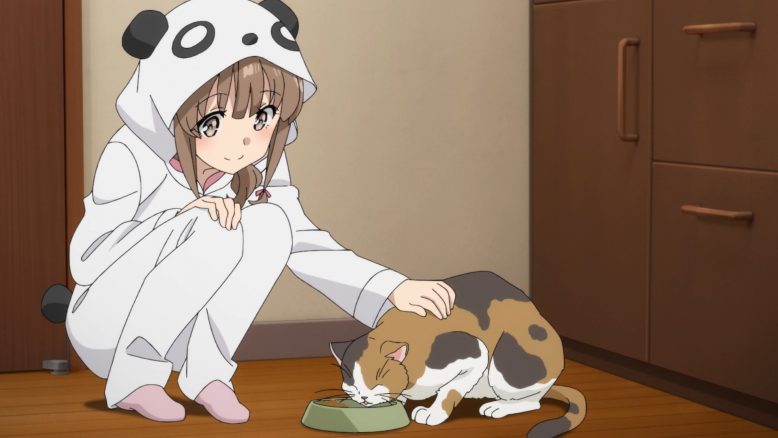 Shoko’s mystery should be covered in the coming movie. With how anime movies are, I probably won’t get to see that for a long time after it airs in theaters over there so no point worrying about it. What her presence did was help Sakuta and let him process. The Kaede he knew is gone, but the bond he had with her exists. The memories and experiences they had exist. Whether or not Kaede gains some of those memories she knows the kind of person that Kaede was. Having that diary and reading it should allow her to understand all that happened and move forward. If a version of her without any memories at all could face her fears then how could the current Kaede do anything less? 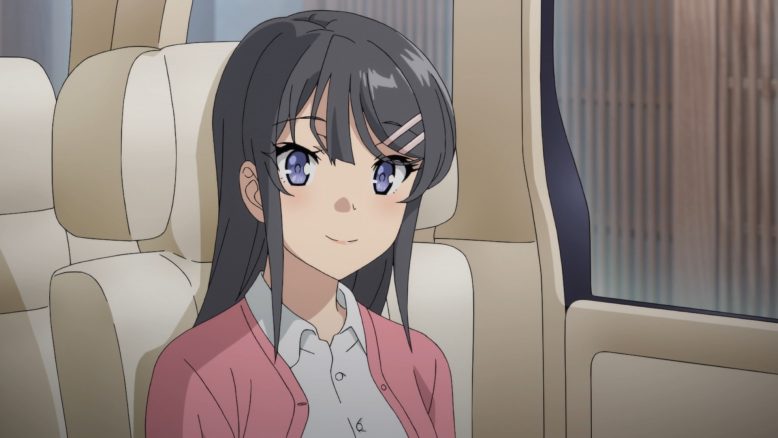 Again Mai is such a wonderful part of this show. I appreciate how she is a pretty balanced character. She does try to understand how important it was for Shoko to appear and she knew nothing crazy happened. But she’s still human. Of course she’s going to be upset that Shoko was the one to be there in his time of need. Mai is in love with Sakuta, of course she wants to be the hero who saves him when he needs saving. There’s no point blowing a gasket, but she can’t just act like it doesn’t bother her either. She needed to just get away. Huge props to Nodoka. She has also grown through her own arc. When Mai needed someone to intervene she stepped up to support her sister.

That allowed for a very lovely scene between the two. It is true that Mai hasn’t had the chance to save Sakuta at his moment of dire need. But what she has brought is incredible joy and happiness to his day to day life. Shoko has been there when all else fails, but she’s essentially a ghost outside of those moments. People live day to day and not necessarily on the verge of utter collapse. I mean sure some might…but I’d hope that isn’t the norm. Mai is precious and the one Sakuta loves at the end of the day. 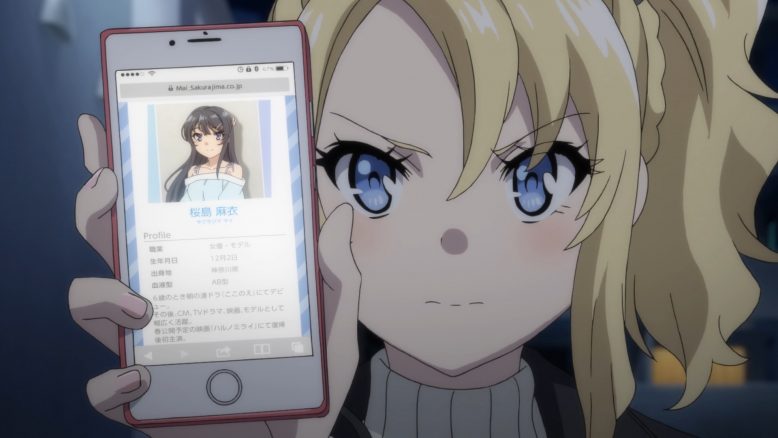 It’s a bit sad to say goodbye to this show. Of course more is coming in film form. I wouldn’t be surprised to have a lull after that and maybe see a second season some years down the road when the light novel is complete or when enough exists for another full season. But I will say this was a great experience. For me this show had one of the best complete packages of the year. It started off strong with Mai’s arc and carried effectively with Koga, Futaba, Nodoka, and ended emotionally with Kaede. The show was a pretty straight forward attempt to tackle some real world issues that are out there while infusing them with supernatural elements. We do live in a world where things like cyber bullying, living attached to our phones, intense peer pressure, family imposing expectations, etc, can inflict stress and difficulties on people’s lives. 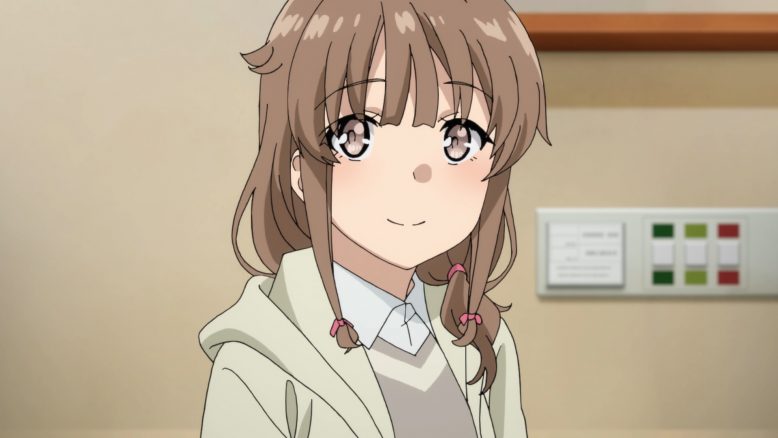 I think the show did a remarkable job with pacing itself despite covering a lot of ground. A show trying to cover 5 volumes in a 13 episode series can be a disaster depending on what light novel you are working with. This one managed to handle it pretty well. We got 3 episodes for Mai, Koga and Kaede’s arcs with two for the remaining two. But I don’t think Nodoka or Futaba’s arcs really suffered due to only getting a couple episodes. The end result still felt enjoyable as far as I was concerned. They did keep the focus strong on the first and last arcs which I think was a smart move. Ending on Kaede’s arc worked since it was an emotional one. That arc both dragged in Sakuta’s own issues and had some nice moments for Mai. Far better than trying to end on Nodoka’s arc. 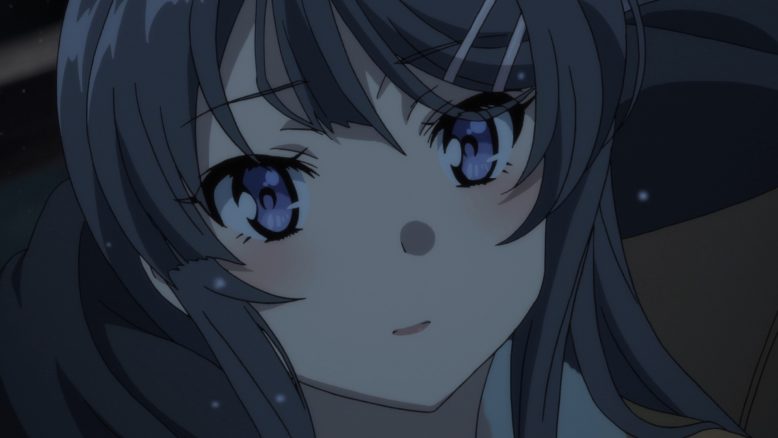 Honestly, I’ll miss this show. It was a really enjoyable show from start to finish. It grabbed me early and didn’t let me down as time went on. Sakuta was a fun and snarky lead that also had plenty of flaws. Mai also remained a really strong focus throughout the show. She didn’t just instantly go out with Sakuta after her arc, but did want to wait to make sure the feelings on all sides were legitimate. And really Mai just kept being really fun and able to keep quipping with Sakuta. It is too bad this show has to end for now, but I am looking forward to the film whenever it comes out and whenever I get a chance to watch it.