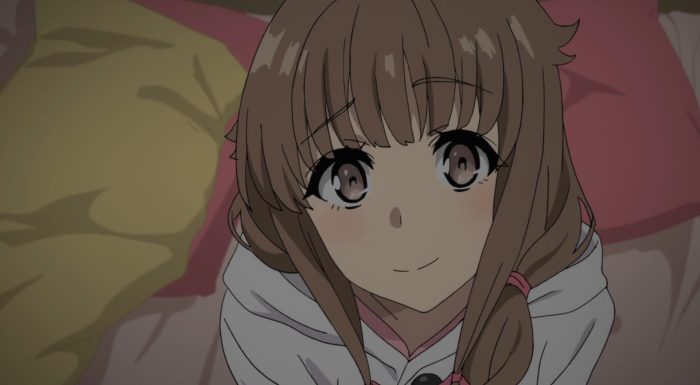 I went into this arc trying to guard against any potential gut punch moments. Unfortunately, I completely misread what exactly the gut punch might be. Well done show in managing to catch me offguard and making this one of the tougher episodes of the show to go through. The show managed to make an amnesiac regaining their memories a rather unsettling punch to the gut. Of course that makes total sense. The character of Kaede we knew isn’t the one that originally existed. This isn’t the first time with a similar kind of thing going on with the Golden Time anime. The Kaede we grew attached to and were worried about is a completely different person. Or at least she’s different to some degree. We could see that in little things from the end of the episode. A slightly different voice, attitude, and even how she moves.

This really leaves me wondering where we’re going in the last episode. I kind of feel the Shoko part is going to be left be since they might not have enough time for that. Shoko was still a major presence at points in the episode. We got to see first-hand just why Shoko became a huge existence to him. In a lot of ways that girl saved his life and gave him direction. From her he gained the belief of trying to be a kinder person every day. Of course his snarky humor remains regardless, but it shows why he just kept throwing himself out there. How can he turn a blind eye when if that had happened in his case then he’d be in a terrible state right now?

The Kaede situation does take priority. Although I suppose you could ask what we should even be hoping for? Do we want our ‘old’ Kaede to come back? Is that fair to the Kaede that effectively didn’t exist when her mind blocked off her memories? That was the girl suffering from the puberty syndrome and being physically tortured. Kaede effectively suffered exactly in the way her bullies wanted. They wanted her to die and disappear. Isn’t losing your memories and essentially becoming a completely different person a type of death? We can only get somewhat of a picture of who that Kaede was. She may be more like Sakuta in being a bit snarky although certainly a person who through online bullying was utterly beaten down physically and mentally.

At the same time we do have a Kaede that we know. That’s a Kaede that Sakuta worked incredibly hard to befriend and accept. Even if part of him did honestly want the old Kaede to return he also cared about the current one. Of course he’s going to be in a pretty uncomfortable state. After all her memories coming back and disappearing was something ‘that’ Kaede was terribly afraid of. She was rushing herself because she didn’t know how much time she had. It’s not fair either for a version that had to deal with a lack of memories and crippling fear to just disappear right when she was starting to grow and mature. She tried hard to become a more complete person and it may have been those efforts that resulted in the old Kaede returning.

Is there a middle ground to all this? Does it have to be one Kaede or the other? Although I suppose even a middle ground of a Kaede with all her memories intact might actually be a third version of her. I suppose the question is where does the last episode for this show go? Kaede’s memories have returned. But her body was still ripping itself apart whenever she felt incredibly stressed. Does her memories come back resolve that? I suppose one ‘good’ thing is that her bullies aren’t a factor any longer from what we heard. They are either in a similar condition to Kaede…or perhaps worse. I just wonder whether the last episode will focus more on Kaede’s memories or about her physical condition. One would think both would remain a focus point, but we’ll just have to see which takes priority.

A lot is made clear in this arc though. Sakuta’s home just turned into a total nightmare. Kaede was suffering bruises from stress. Then you had Sakuta’s mother just losing her mind. And to top it all off Sakuta hit his own run in with that syndrome. I am curious what the heck his syndrome meant though. He was clearly in an unstable state upon seeing a Kaede that was nothing like the Kaede he knew. Then seeing his mother in the state she was in didn’t help. Maybe his emotional pain at seeing his family coming apart resulted in a physical injury. Sakuta wasn’t even in the best state for a while after that thanks to no one listening to him. I’m not exactly sure how the doctors believed he managed to inflict those injuries on himself, but hey they are the professionals.

It took a lot of effort for Sakuta to rise above it. He received help,but then it was up to him to proceed from there. Accepting the Kaede he saw before him as her own person was crucial. It was the difference between Sakuta and his father. His mother…well there was no dealing with that. But that probably did help keep her symptoms at bay. There was no stress with a brother who utterly accepted her and wasn’t looking for a different Kaede. No wonder she’s distant with her father. He clearly couldn’t accept this Kaede in a way that made her comfortable to be around him.

This explains so much about the Kaede we know. Her behavior of referring to herself in the third person, an extreme attachment to her brother, and even that she’s more attached to him than a sister normally would be. The lack of memories may have sparked Kaede to try and be a more ideal little sister as if to strengthen their relationship. She both cares deeply about Sakuta because he accepts her and because he’s the only person before the start of the show that she could trust. That has changed in time with Mai growing into a figure she trusts and likes. Although in a sense that was made even easier because Mai didn’t know there was any other Kaede than the one she was looking at.

This is probably going to be a pretty emotional ride going into the finish. They have the potential to match if not surpass the emotional shots fired in the opening arc. What’s going to happen with Kaede? I’m curious as well how characters like Mai may react to all this. It should be much like the shock for Kaede’s family when her memories originally vanished. I just hope this all ends in a way that we can walk away from it with a smile. Things have worked out rather well for the other arcs to this point. The two Futaba unified and I don’t think anything was lost in that exchange. And everything worked out ok for Mai, Koga, and Nodoka. Please let this work out ok!


About Us View More Details