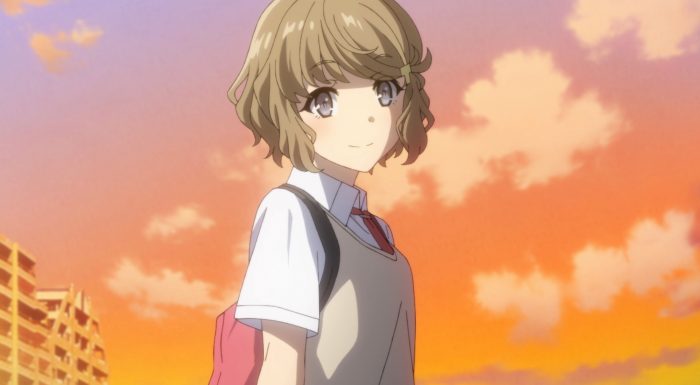 And so concludes the encounter with Laplace’s demon. This certainly proved to be a little tricky to solve even though Sakuta found his way to a solution. I won’t say this was as impactful as the last episode of Mai’s arc, but I still think they did a nice job resolving things with Koga. In the end she never crossed the line of becoming a bad person. From beginning to end she was really just pulled along by her feelings and was caught up in something she had little control over. It was her feelings of falling in love with Sakuta that kept her from being unable to truly let go of their fake relationship. 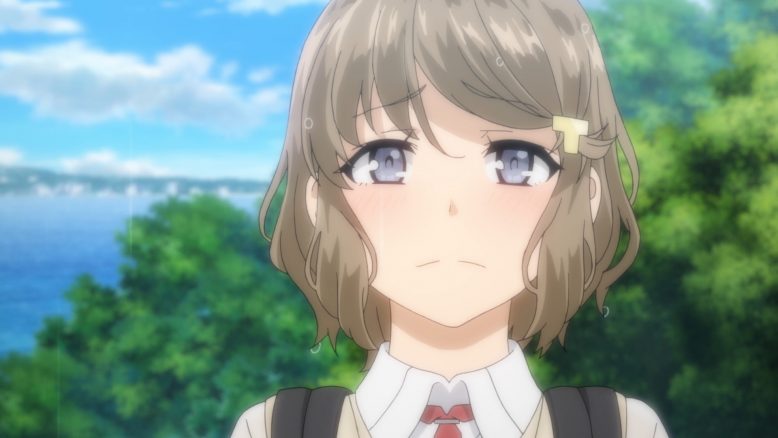 All Koga needed was time and a push. She was able to face her own feelings head on. It was painful for her to express how she felt for Sakuta, but that also allowed her to face the original crisis without hesitation. After facing the pain of giving a confession that couldn’t succeed she was able to realize what really mattered. Her surface level friendship with Reina or the guy confessing to her originally didn’t really matter. She just dealt with her own issues by the end and moved forward. It wasn’t the end of the world although it could have gotten bad for her.

A bit ideal sure that she was able to build a friendship with the girl that she and Sakuta helped out during the ‘simulation’ but that’s fine. That was something she found on her own terms and even if that didn’t happen she’d still have Sakuta’s friendship. Koga had grown enough that she wasn’t going to collapse. And I like the idea that encounters had during that simulation gave Koga the idea of who was the kind of person she could get along with. Hopefully this will be a group she feels comfortable around. One benefit from all this will be not feeling so afraid of rejection that she’ll stay up late on the phone or be unable to live her life because she doesn’t want to miss a group chat. 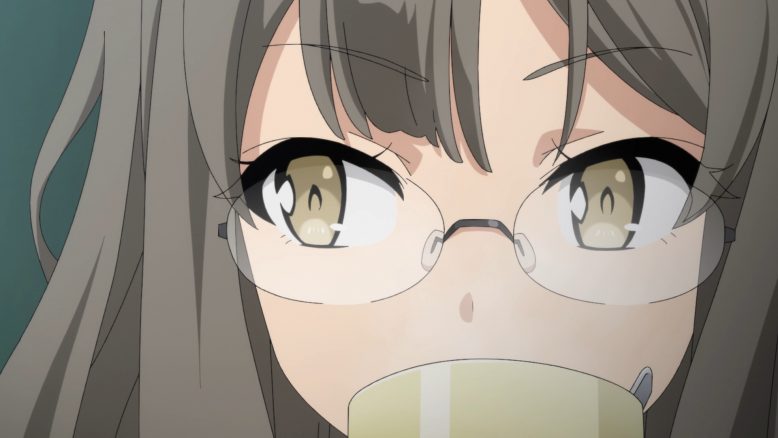 That events reset to the start of the arc didn’t really surprise me since Futaba kind of called it early on. And really nothing until this episode solved Koga’s core problems. The fake relationship with Sakuta dodged things (sort of) but she was still uneasy about her situation. Koga was still terrified of being disliked and isolated. But by the end of this she’s in a good spot. Looping everything back to the start could be annoying except most important events still ended up happening. Sakuta and Mai’s awesome interactions still happened with variations due to not dating Koga this time. Kaede still gets her gift from Mai and a variety of other things still happened. So it isn’t as if nothing we saw happening in this arc ends up sticking. And especially for Sakuta and Koga the events of this arc won’t be forgotten. 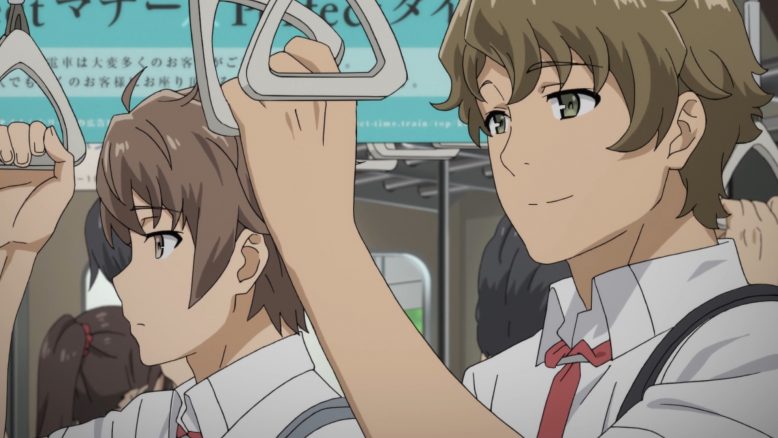 What caught me by surprise the most was that Kunimi actually appears aware of Futaba’s feelings for him. I thought they were going with the angle that he’s a bit dense and just hasn’t figured it out how she feels. Instead, Kunimi knows how Futaba feels, but he’s unsure how to deal with it. He’s trying to handle an awkward situation. What do you really do in that situation? Should be push a bit and get her to confess to him just to turn her down since he’s dating someone (who he totally should dump)? Should he just give Futaba her space and let her decide what to do with her own feelings? Sakuta essentially went with option A since he was getting tired of repeating the same day over and over XD. 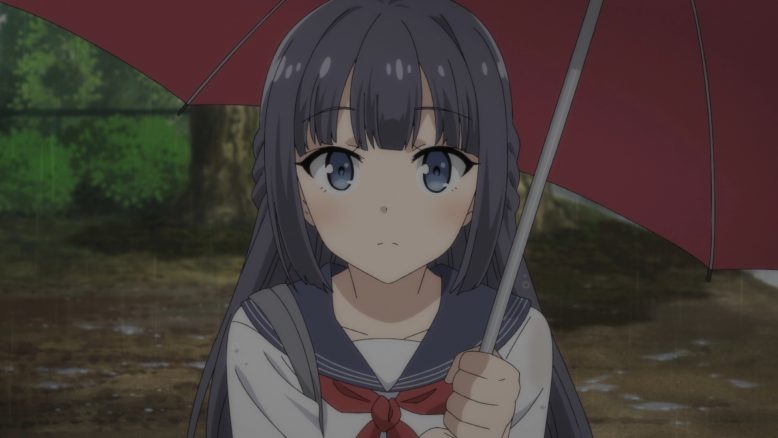 It’s impressive the Kunimi bit surprised me considering the end of this. We had the highlight moment of Sakuta finally securing his relationship with Mai. He even picked up a tip from the whole thing with Koga and did remember to push a bit on getting her to say how she feels about him. He didn’t quite get that…but no complaints XD. And then the show just drops a bomb with meeting ‘Shoko’ at the end of the episode. That just opens all kinds of “what the heck!?” questions. Is this the Shoko that Sakuta met before? Is this actually just a relative with the same name? Or heck, could it be that Shoko is somehow going backwards in time while Sakuta and everyone else move forward in time? It would explain why Sakuta couldn’t find anyone that knew Shoko when he arrived at highschool in his first year. 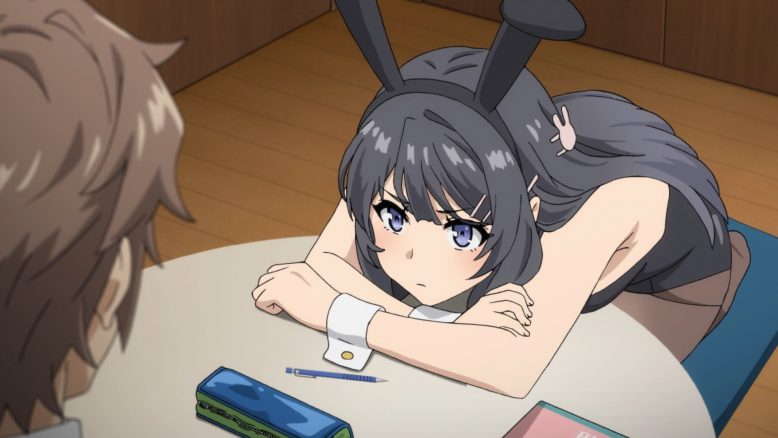 Considering the title…sure why not

This was another really good episode. It wasn’t as much an episode of triumph as say Episode 3. Since that one was all about hitting a low point and then helping save Mai from utter isolation. Here it did require Koga to face her true feelings and hurt a bit. But it wasn’t an episode that was painful to watch. Sakuta handled things pretty well and supported Koga as best one could in pushing her to make a confession that couldn’t succeed. Koga honorably tried not to cause problems (but the time loop forced her hand) and in the end she quickly grew from the experience. She really grew up having gone through this. Koga knows she isn’t alone and has friends.

So now we move onto the next arc which surprisingly doesn’t appear to be about Futaba as I thought it might. And now we can say Mai in her bunny girl outfit wasn’t a one-time thing for the first episode. Somehow I doubt she’ll find an occasion to wear it in the next episode, but you never know. I’m definitely curious what is going on with Shoko and how Sakuta/Mai will tackle running into a younger version of Sakuta’s first love.