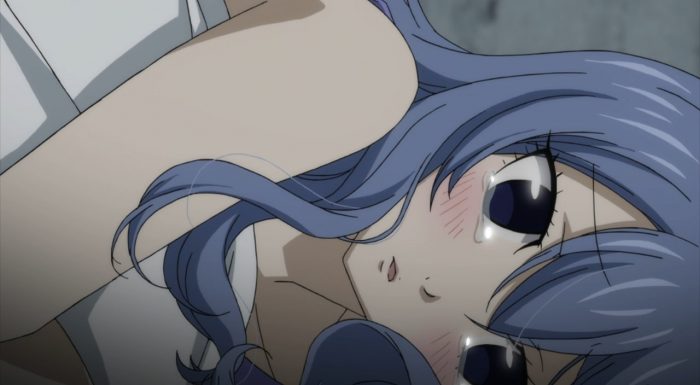 Seems like Fairy Tail’s Final Season is in a bit of pendulum like pattern, oscillating between great and just.. Decent. This week, was another decent episode, where things weren’t as impressive or surprising as what we got last week. Instead, what we got this week was a bit more predictable and standard. I think after 2 years of waiting, my expectations and patience for the show are a little bit higher and thinner respectively. I immediately want the show and the story to reach the heights of the Tartaros Arc (which I personally feel was and is the highest point in the franchise’s history thus far), but I suppose we have to give the show a bit of time to really get going. 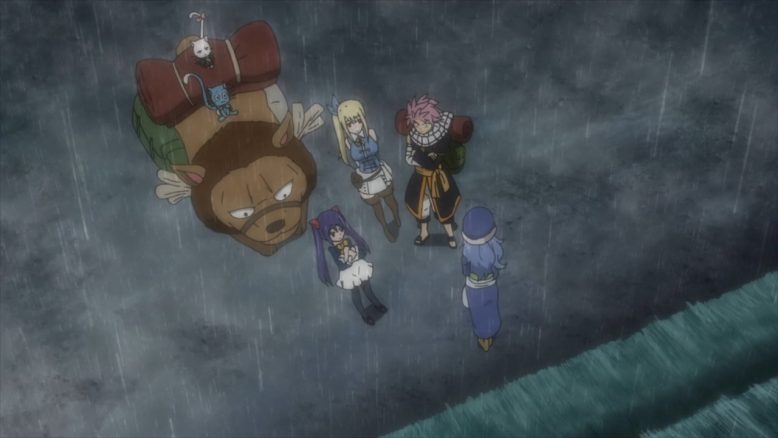 I get that, but a part of me keeps thinking back to the Tartaros Arc and how amazing its start really was. Laxus basically sacrificing himself against the first attack by Tartaros? That was awesome, and it was a really explosive and exciting way to start off the arc. Here? The so called revival of Fairy Tail is a story that’s a lot more muted and a bit more predictable.

Its certainly interesting to see all the changes that have happened in the last year or so of the story’s own timeline. It is, but I also think that that by itself just isn’t enough. While the Wendy thing worked for me at the end because of how rooted in reality and unexpected it was, Gray and Juvia’s whole story is less impressive. So Gray’s lust for revenge basically consumes him and he turns out to be the one who killed Frosche and created Future Rogue eh? I can’t say its an altogether novel or creative idea. 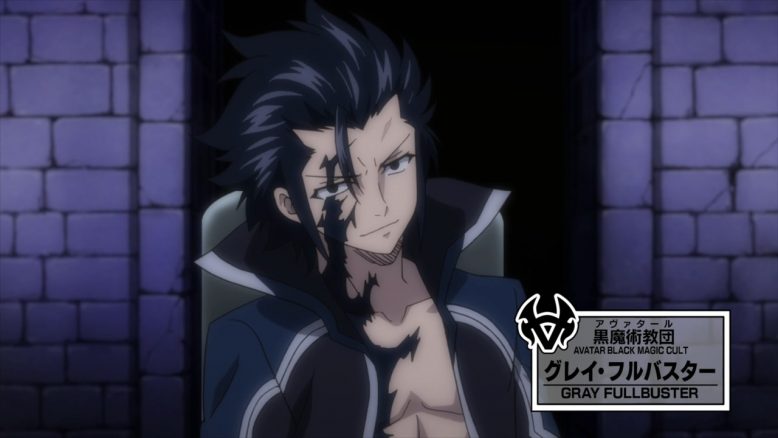 For one thing, its a bit disappointing to see Gray kind of be relegated to a villain possessed by evil at this point. In the Tartaros arc, the story kind of built him up as a secondary protagonist, and he joined together with Natsu to eventually take down Mard Geer. But oh how the mighty have fallen… And Gray now is nothing more than a revenge driven villain that Natsu has to face and bring back to the fold.

Look I’m not saying its terrible, because the idea does work and it was setup pretty far in advance. Mashima-sensei did set up someone as the person who Future Rogue reveals to Natsu, and Gray’s whole “Dark” marks thing was pretty telegraphed from the end of the Tartaros arc. The problem, of course, is that it just doesn’t create an interesting scenario. We all know Natsu is going to snap Gray back to his senses, and we also know that the big reveal regarding END’s identity isn’t coming any time soon. 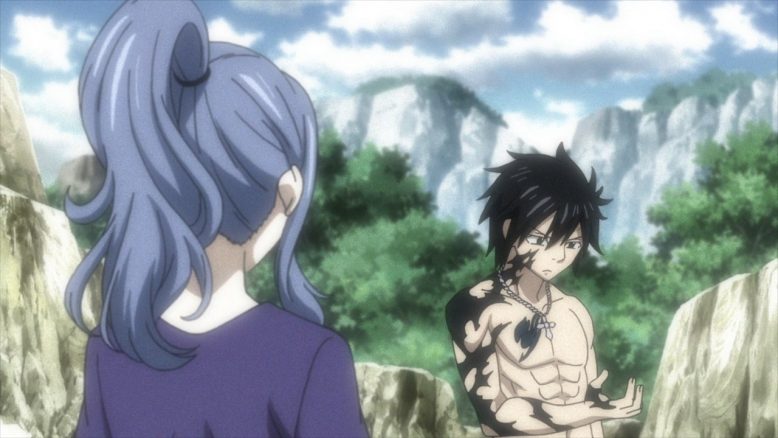 Yes, Natsu is END, the object of Gray’s revenge, but neither Natsu nor Gray know that yet. That’s a bombshell that’s going to drop on Natsu whenever he reunites with Zeref. So for now, the END part of the equation isn’t really coming into play. Which makes Gray’s whole situation right now nothing more than an annoying inconvenience. I’m not entirely sure what would’ve been better. but I feel like Gray’s character arc here is a bit of a misstep.

If anything, Gray’s betrayal and leaving of Juvia is a lot more inexcusable and disappointing. After all that Juvia and Gray have been through together, you’d think he’d think twice before just succumbing to the darkness and focusing on revenge. Yes, his dad was a pretty cool dude, but Gray only met his father in the Tartaros arc, not before. There’s not enough of a connection for Gray to basically be consumed with rage and evil. It just doesn’t feel great man… That’s all I can really say here. 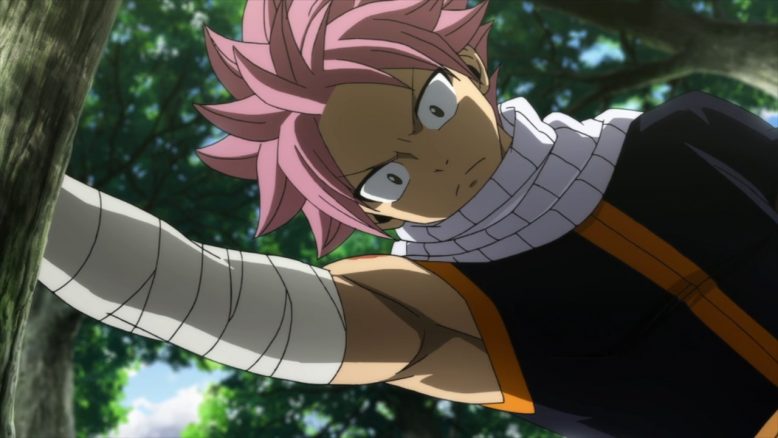 What was interesting, however, were the other side tidbits that got revealed as the episode progressed. For one, it was really nice to see Natsu actually behave like a smart, measured and mature dude for once. Natsu actually was very thoughful and smart about how he approached and dealt with the whole Future Gray situation. Him explaining it to Lucy and Happy was a really sweet moment to see, and its a far cry from the Natsu that would just rush into things without thinking at all. Sure Natsu’s no schemer, but he’s definitely grown into someone that considers and things about things, at least a little bit. Plus Natsu not being motion sick on that boar? That was also a pretty nice moment that I’m surprised Lucy didn’t ask about or comment on.

Also, it goes without saying, but this whole Gray situation gives Natsu another reason to kind of run off and train. His whole abandoning his friends makes a lot more sense now, and there’s a secondary reason beyond just dealing with Acnologia. 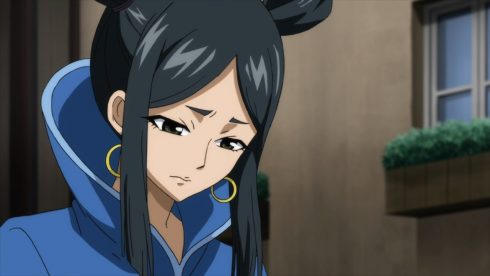 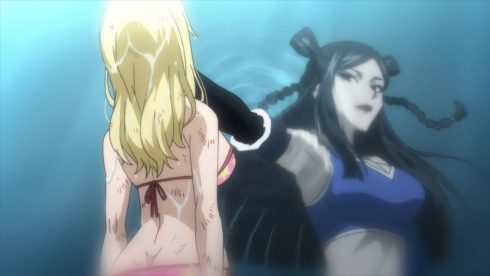 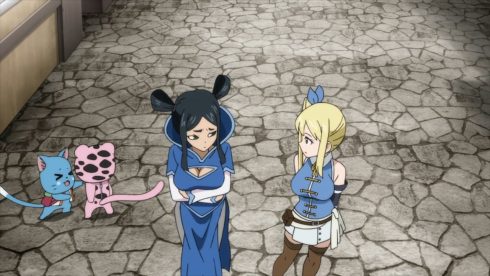 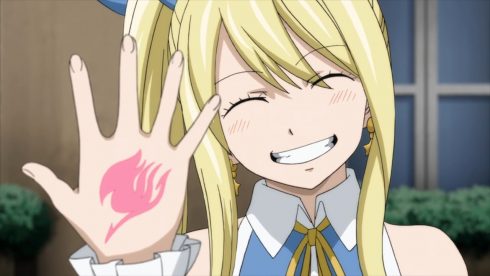 Besides Natsu and Gray though, there were a few other nice moments. Seeing Sabertooth again was fun, but the highlight was Minerva finally apologizing for her rather despicable actions in the Grand Magic Games. Its cool that Lucy is willing to move on and forgive, but I do believe that Minerva is one of the characters that kind got off a bit lightly after all that she did. Still, it was nice of the show and of her to at least acknowledge it, especially when she and Lucy were talking alone.

Beyond that, it was nice to see Gajeel and Panther Lily again, and see where they ended up. Them being part of the Magic Councill’s enforcement force is an interesting little wrinkle in things, and it seems like they’re on a collision course with Gray and Natsu at the whole Avatar hideout. I look forward to learning about how Gajeel ended up where he did, and what the story is behind all of that. 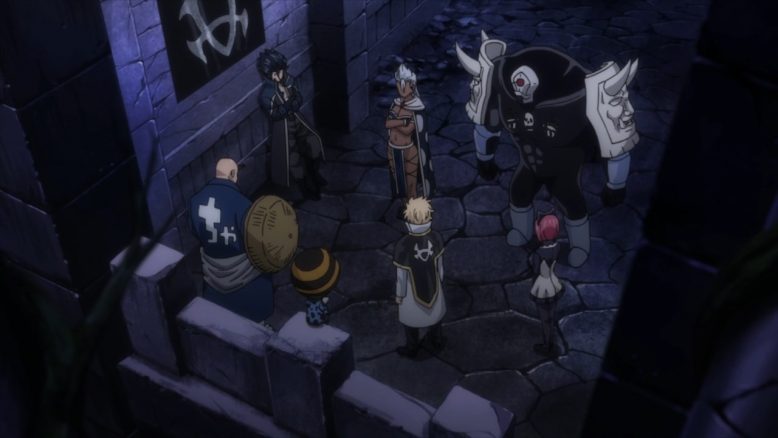 Finally, I suppose its worth talking about Avatar itself. Avatar is honestly not that interesting of a group of antagonists, and I really hope they are the canon fodder that they appear to be. The sooner we get through this whole “Gray is evil” story, the better. I really do hope these villains are a bunch of push overs, because despite their unique character designs, not one of them looks altogether too interesting.

In the end, I suppose this week’s episode was more or less setting us up for the Natsu/Gray battle that’s coming up. Its not my favorite part of the story, but there are some questions that I am interested in. What exactly is the thing possessing Gray that eventually possesses Rogue? And what did Gray mean when he said Ultear was actually still alive? Those are certainly interesting questions, and questions that may very well provide some good moments in an otherwise less than exciting situation. Still, Fairy Tail hasn’t let me down before, and I did judge the whole Wendy situation a bit prematurely. 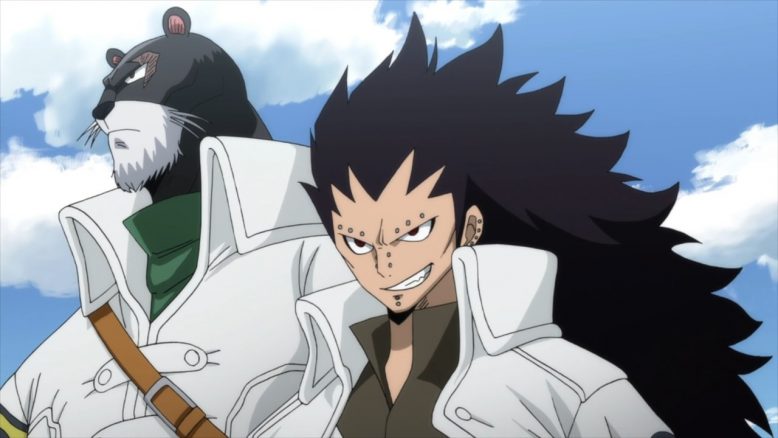 So maybe there’s a chance that the next episode will oscillate things back to the “great” part of the episode spectrum. I certainly hope so, but if it doesn’t, I at least want us to get through this particular story as quickly as possible.