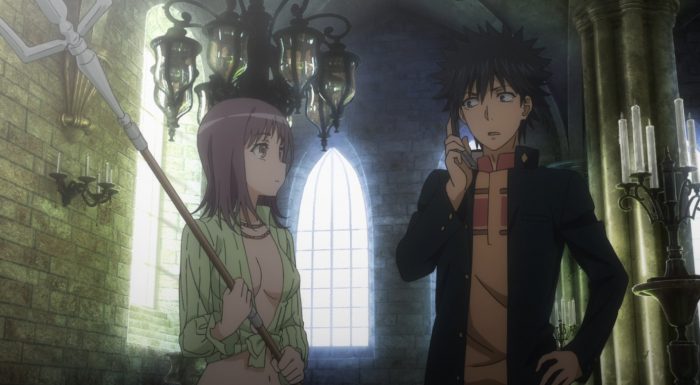 Well… That conclusion certainly made the first arc of this show feel like a rather useless waste of time (for the most part). I’m not really sure what to say about this first arc of the third season, except that its pretty throwaway and for the most part nothing more than an elaborate bit of setup for future events. I totally get that this arc was just meant to give Touma something to do while the exposition and large world building elements took center stage, but man, there has to be a better way to do this. 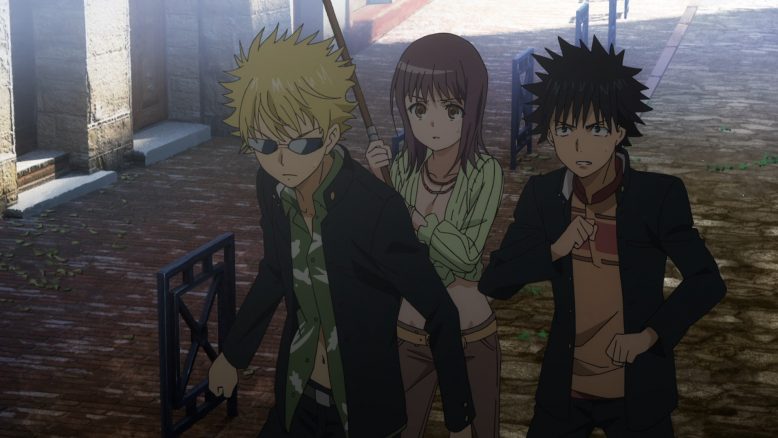 I mean, there used to be a time, many years ago now, where Index would just nail both the world building and the smaller more immediate conflict. Here? Well the whole battle with Terra and the whole C Document thing didn’t really amount to much at all. Terra’s ability is actually pretty weak and dumb, and he’s more or less stopped in the classic Touma style. Touma figures out his weakness, and then proceeds to punch him twice in the face. Oh and then Touma goes ahead and touches the C Document and that more or less gets destroyed by his Imagine Breaker.

Tsuchimikado, meanwhile went around trying to delay Academy City and Aleister Crowley’s machiens and soliders, only for Accelerator to swoop in and basically clean up shop. Pretty meh stuff overall, and even Accelerator’s little appearance was nothing more than a quick cameo. Instead, what really made the arc interesting were the little tidbits regarding Touma, his imagine breaker and Misaka of all people. 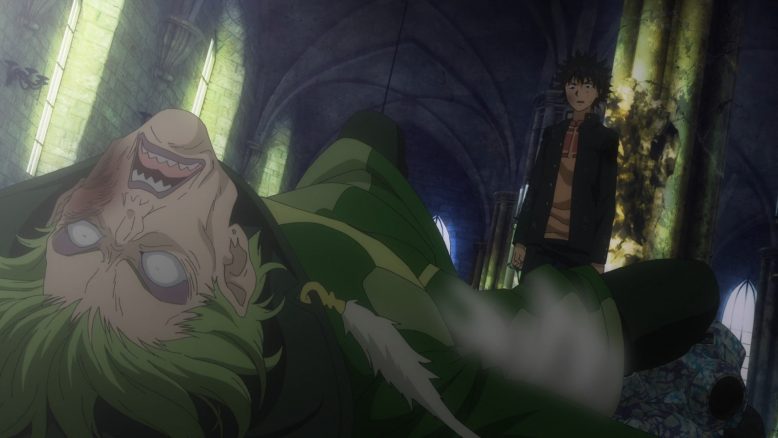 Before I get to that, I do want to, once again, mention how little I care about this Church stuff that the story is more or less focused on. This talk of Angels, and Original Sin isn’t all too original, but the kicker was the whole “Kamijo” thing. The show (or novel) and its writers do realize that they’re basically creating a play on words that matches the surname of their protagonist right? That’s a bit too on the nose if its a pun, and entirely too silly as a concept.The fact that we’re going to get Acqua of the Rear basically invading Japan (and therefore Academy City) has me less than enthused for what’s coming down the line.

Instead, what I am excited for, is related to what happened during Touma’s little bout with Terra. Touma, before the battle is actually on the phone with Misaka, trying to get a handle on what Academy City’s angle is with regards to the whole situation he’s in. As the battle starts, Touma drops his phone, but it never actually disconnects, and Misaka is more or less on the line throughout the whole event, listening in. 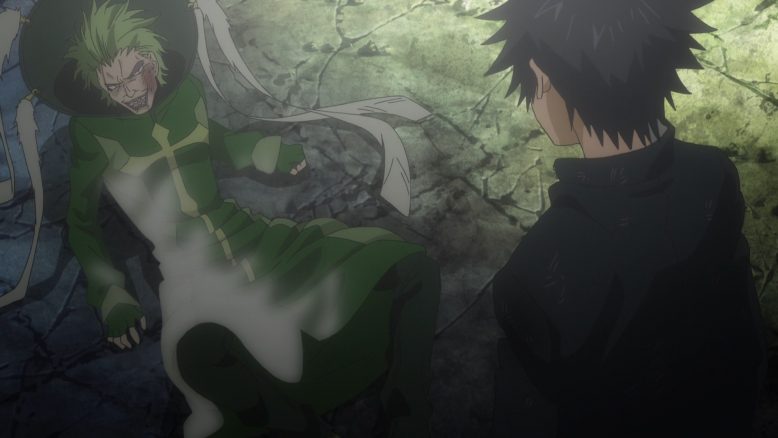 When Terra starts talking about Touma’s Imagine Breaker and its full powers, he correctly identifies that Touma has lost his memory. We know this as the audience, its something that happened at the end of the very first arc of the franchise as a whole. Touma saved Index, got nicked by a feather and more or less lost his memories for good. He has, since, kept that a very closely guarded secret, mostly to make sure no one worries or that Index herself feels responsible.

But now, thanks to the events of this episode, Misaka Mikoto knows. She knows now that Touma has lost his memory and that is definitely going to play a major role in their interactions moving forward. For one, Misaka doesn’t know “when” Touma lost his memories. So to her, the person she’s been interacting with has been essentially a different person from who she knew and got to know. The Touma from episode one that consistently kept Misaka’s rampages in check? He doesn’t really exist. 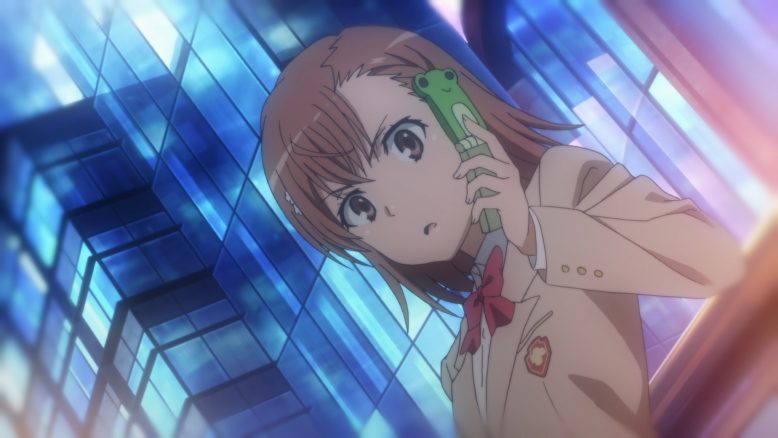 How does that change the dynamic between these two characters? That is the question indeed. We know that Touma helped Misaka out AFTER he lost his memories, so at the very least the guy that she feels indebted to is still the guy she knows today. Of course, now Misaka knows a special secret, one that perhaps no one else will ever know. Does that deepen the bond between her and Touma perhaps? Or will this actually cause a rift and potentially give Misaka a chance to really separate from her crush on Touma?

I’m not sure, but I love the possibilities of this whole situation. Touma’s memory hasn’t really come up in a long time, to the point where I kinda just treated it as a cool thing that has since not really had any real impact on the larger story. So to see it all come back into play? That’s pretty cool. 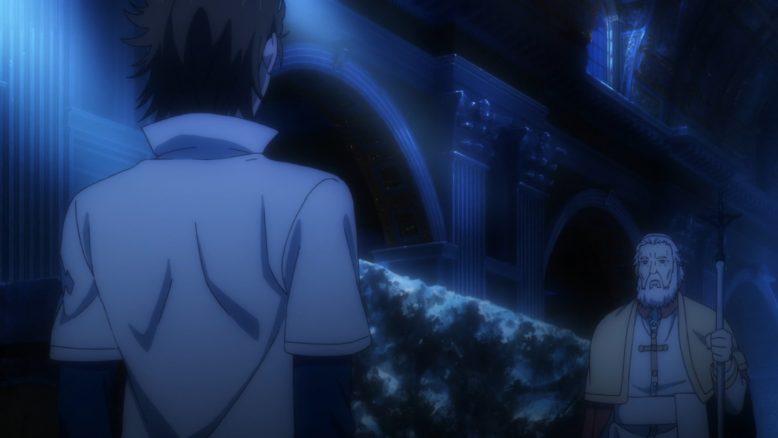 There’s always a danger of revealing too much in a story like this, and I’m curious to see what the show’s big explanation is. Either way, I suppose we’ll know more as we proceed through the story if not the season. 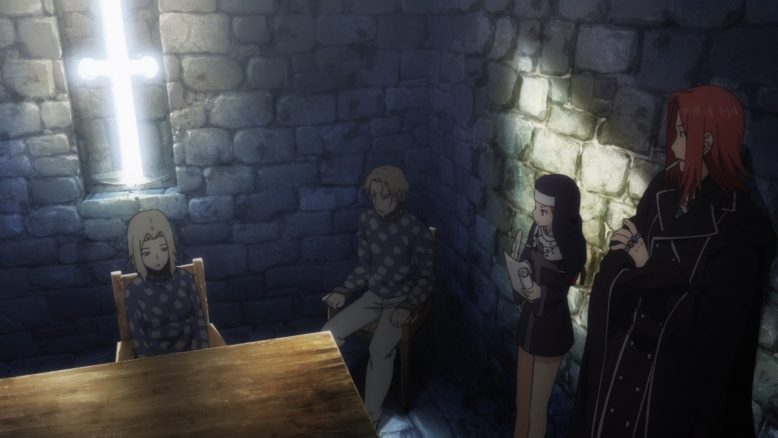 Ultimately, however, I will say that this first arc of Index III really didn’t impress me all that much. There’s some interesting stuff with Touma for sure, but I can’t say I’m actually all too interested in what’s going on with the whole right seat stuff. It seems like the show will be shifting gears next week, so hopefully things improve, and the whole episode is interesting rather than a few small tidbits.