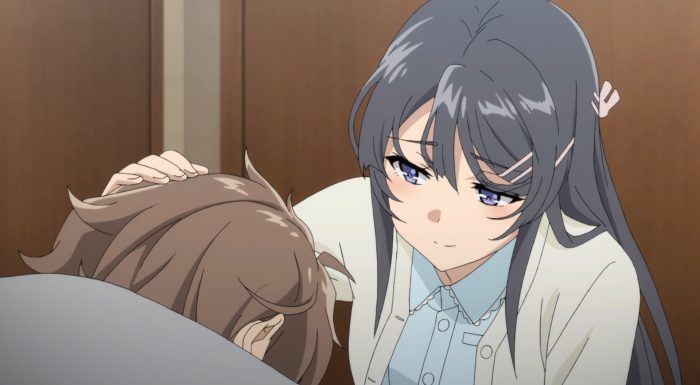 They managed to conclude the opening arc in this episode with style. The vanishing Mai incident had quite a few tense moments. I wasn’t sure if they were going to take three or four episodes for this arc so whether this episode ended on a sad note or a victorious one was up in the air for a while there. I am glad that it’s possible to sit back and say that this episode was an enjoyable one. Even though they concluded this arc in three episodes, for me it didn’t feel overly rushed. This episode felt as if it was spending enough time hammering in the panic and desperation that Sakuta was dealing with. This guy was really pushing himself to try and figure out a solution to the immediate crisis. Not easy to do when dealing with sleep deprivation and a ticking clock. 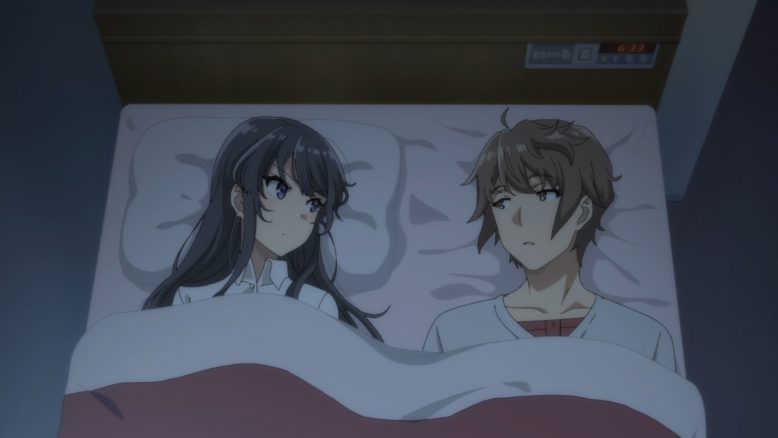 In a lot of ways it is kind of hilarious that being nervous about sleeping beside Mai was the reason that Sakuta could retain memories of her as long as he did. I initially thought he was joking about not getting a wink of sleep, but in the end he really didn’t. I’ve pulled some all-nighters in the past, but I can’t imagine staying awake for multiple days in a row. Of course I never had such a desperate need to stay awake that long. I can’t imagine how his tests must have gone with him dealing with Mai’s situation and sleep deprivation. I can’t imagine having to deal with that kind of tension and trying to find a solution. It got all the more difficult since Futaba got sleep earlier than Sakuta. Clearly she wasn’t so invested in the situation that she’d put herself through sleep deprivation. 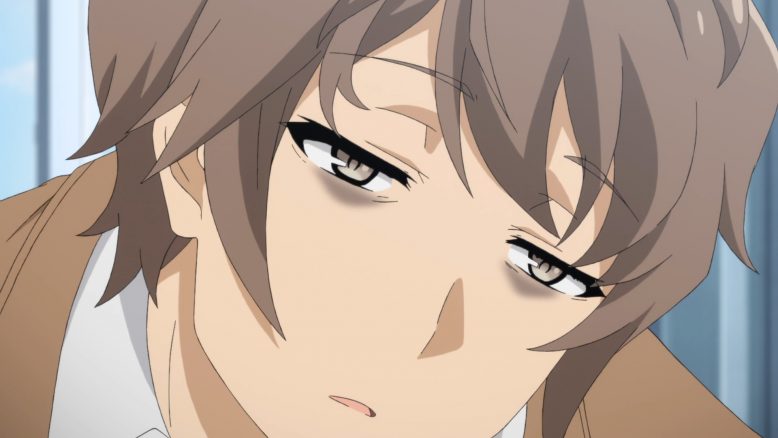 The core so far has been the interactions with Sakuta and Mai. This episode was no different there. It didn’t take that much work for Mai to figure out what was going on with Sakuta. I was a bit surprised she was willing to straight up drug him in order to make sure he got some rest. Makes sense though. Even if it is for her sake watching someone just torture themselves when they’d have to sleep eventually. Part of it might have been a belief that he’d keep his promise and remember her no matter what. In that case then having him refuse to sleep would be rather pointless and harmful. Regardless it is the little banter and discussions that sell me on these two. Just simple things like Mai straight up saying that her little sister is cute, but not as cute as Mai XD. 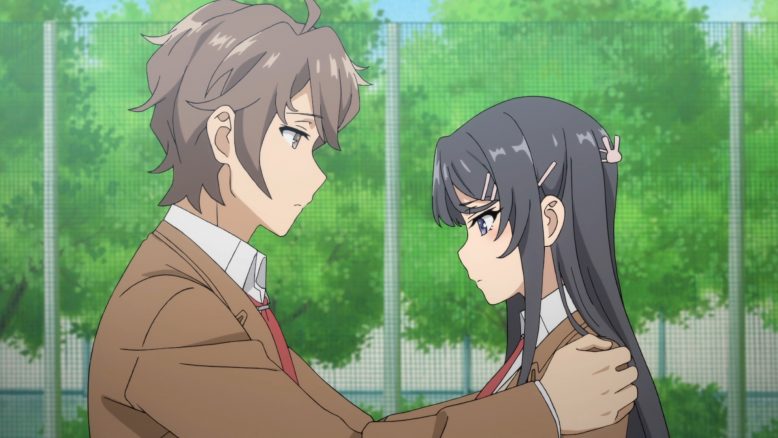 I kind of like that Futaba did stay up at least one night. Sure there were tests, but I can’t imagine she is the type that needs to pull an all-nighter before exams. And it does appear she left herself a note before she did fall asleep eventually about a possible solution. This was kind of a crazy situation and solution to the problem. Just a huge public confession that most certainly created a situation the school couldn’t ignore. I thought he’d go for the PA system and hijacking it, but screaming outside might have been even more impactful. There’s really no way the school could continue ignoring Mai after that. Heck that public confession might honestly be something that the school as a whole remembers for years. A story passed along about the crazy guy screaming outside about his love for a girl.

Honestly I am really impressed with Sakuta. That kind of move isn’t something easy for everyone. But he didn’t hesitate for a second. The OP really captured the kind of hectic manner he runs around with at times. He just bolted outside and moved into his plan instantly. Maybe in part he was afraid any hesitation might cause him to forget Mai again, but regardless I was impressed. For me that would be horrifying to do even if I knew the stakes and need for it. He just took his fight to the atmosphere at that school and did what was necessary. The music built up to that moment nicely and then kind cut away to let his emotional cries carry the scene. It only picked up again when Mai entered the scene. 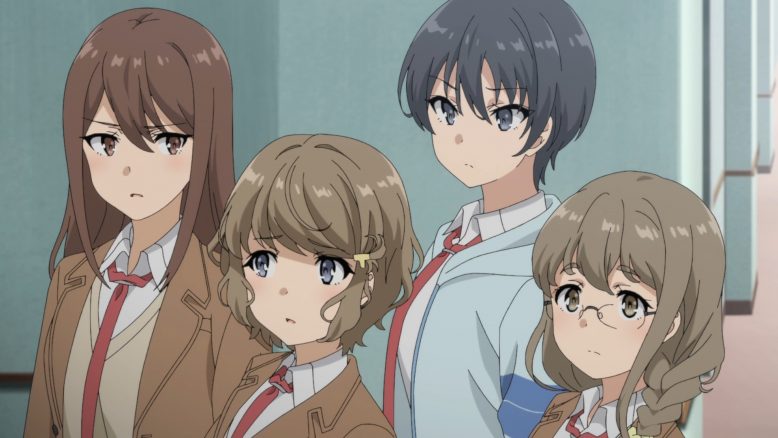 One thing I love about these two is the support. Mai just stepped up and moved to clear up Sakuta’s issue while they had everyone’s attention. Just why not at that point? Partly I like that Mai is holding things up for the time being. The situation they were in was such an intense and emotional one. Waiting a bit to see if they really like each other or if it was just getting swept up in the moment makes sense. It does make me wonder how these two are going to interact going forward. This situation more or less resolved Mai’s issues. Clearly the story is going to move on to other people suffering. What will Mai’s role be from here on out? I sure as heck hope that Sakuta’s interactions with other girls going forward isn’t about building a harem, but rather adding to his list of friends. 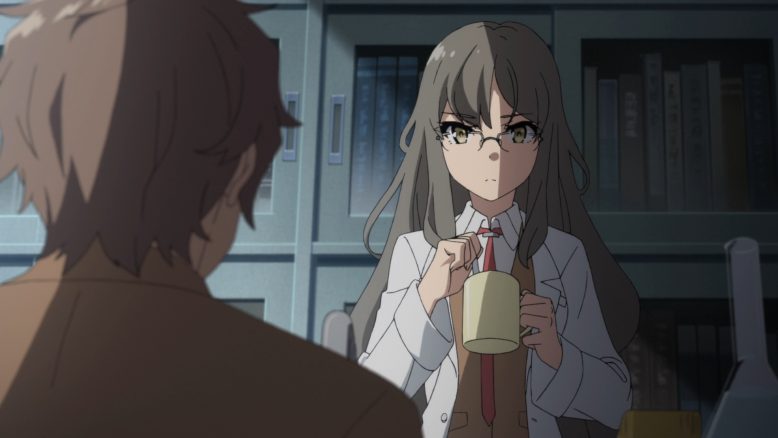 But three episodes in and I’m still really enjoying this show. Who knows how the story will develop from here and how other arcs will match up to this one. But I really liked the banter with the main pair and hope to see more of that going ahead. It has been three strong episodes in a row. So no chance I can give up on this show now. I’ve got to pick it up.