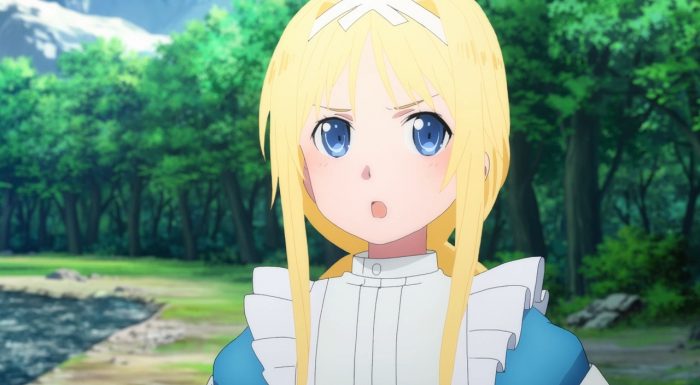 Well that was a first episode…I can kind of see why they had to make it a nearly hour long first episode. The first 20 or so minutes of this episode alone would have simply left people utterly confused. They straight up needed the rest of the episode simply to partially explain what the heck is going on this season. Not sure what to say when the first episode back to SAO isn’t quite as impactful as the first episode for the SAO spinoff was. But it wasn’t a straight up bad episode. There was some good stuff in there and the drama did kick in at certain moments. There is good potential with this new season. Where it goes in part will depend on the aftermath of this episode’s ending though. Obviously they aren’t killing off the main character, but there are various angles they can tackle here. 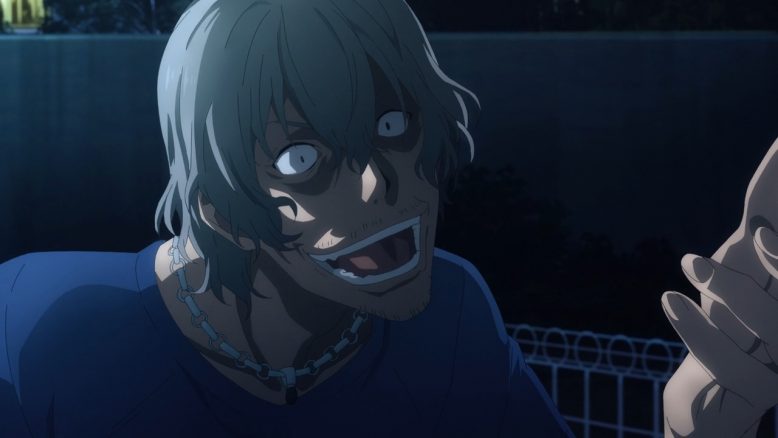 It will be rather convenient if that sensor Kirito pointed towards ends up somehow keeping the ‘death gun’ from killing him. Although I can’t help but think that will be the case. It seems unnecessary to point out the sensor’s location and have the attack hit that spot without it mattering. But who knows. What we do know is that Kirito isn’t done with the Alice in Wonderland scenario and is going to end up heading back in. Whether he’s put into the device to keep his mind active while he recovers or something else we’ll have to see. Heck, maybe the twist is that the ‘sensor’ device is what was blocking his memories and this attack will do damage to that. The end result being that his memories are freed up and he knows what has been going on. 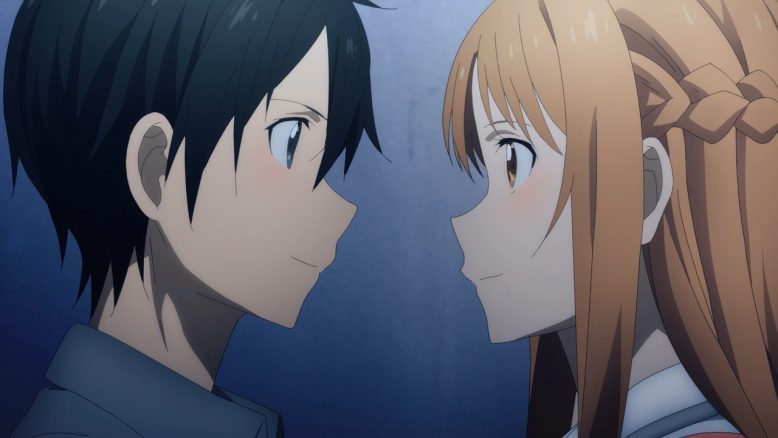 I’d say “so what” but this is Kirito. He’s honestly at least partially insane. Considering what he and others went through I can’t believe how far he chases the full-dive journey. I wouldn’t go anywhere near a place that said they had to wipe my memories of whatever it was I was doing. For all I’d know they were torturing me for hours and I’d never know the difference. No thank you! But Kirito is the type that just jumps right on into this sort of thing because he wants to know more. In some ways I find it hard to reconcile the guy so obsessed with this technology and the one that openly expresses his love for Asuna.

That Asuna is a bit warped as well just makes sense. Some people wouldn’t so gleefully look at a phone app that relays information about their lovers heartbeat and physical condition. But Asuna is something else. I can’t entirely blame her though since Kirito is a guy who builds his harem even after ending up with his main girl. Keeping an eye on any sort of writing based potential for cheating just makes sense. 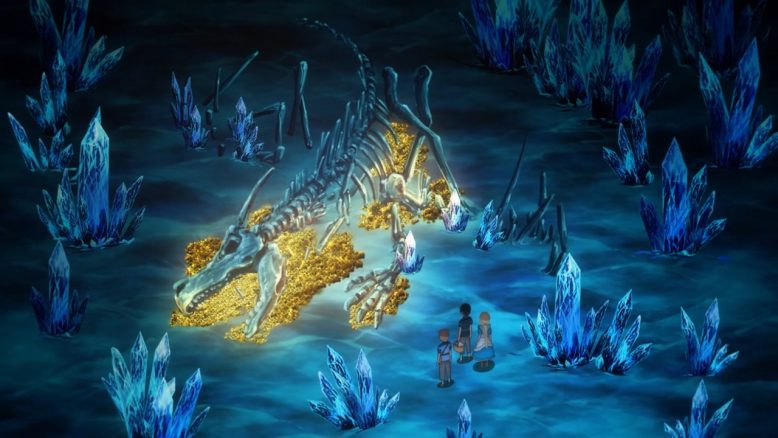 What do you even say about the first part of this episode? It was a bit weird. Not sure how much I should even say about Eugeo and Alice since the show itself hasn’t really given much explanation about them. The trailers actually covered more in that sense XD. It seems safe to presume though even without those that Eugeo and Alice are characters within this testing game. There’s no sign of anyone else doing this test with Kirito so he should be the only real person within it. Not too much to say about the characters themselves. Eugeo at this point is a hesitant type of person who (for good reason) tries to stick to the rules. Alice is a cute kid that is much more on (kid) Kirito’s level and pace. My condolences go to Asuna. Kirito somehow picked up another childhood friend after his childhood had ended. 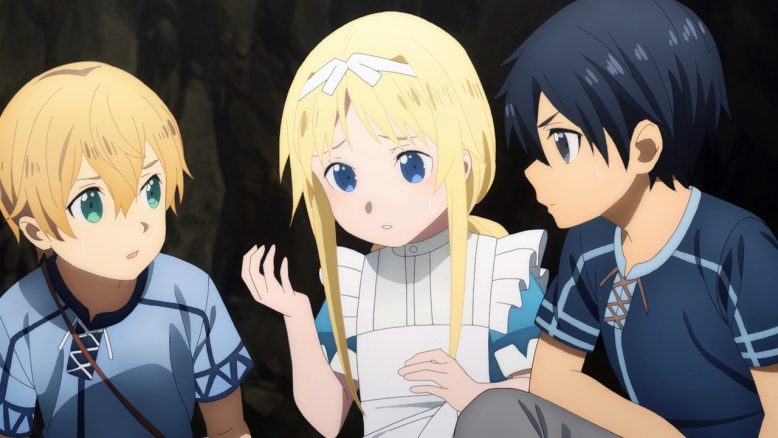 Not sure what to say about the current situation. How serious is it? The company can change it or do whatever they want at a whim. Although I suppose with this being SAO the company is going to turn out to be evil so Kirito has to go in there and save this girl himself. She may already be ‘dead’ within the setting though. But this is SAO so I’m sure they’ll give Kirito a chance to save her. What the long term game is I’m not sure. There just isn’t enough to go on despite the first episode being entirely within that fictional reality. Extremist rules are in place where if you do anything slightly taboo you are in deep trouble. Alice just put a finger on the ground she wasn’t supposed to and that was it for her. Are the dark forces actually evil? Who knows. 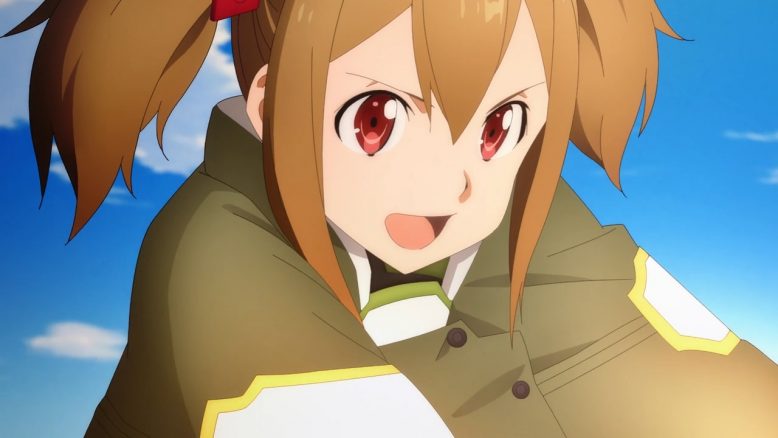 It wasn’t a bad first episode. I just wouldn’t say it was a mind-blowingly good one. They managed to fit in that GGO segment maybe in part because of the spinoff and since they did need an excuse for a big fight. I’m just not sure how or if the next BoB is going to have anything to do with this season. It felt as if this had some importance. But I can’t see how it ties into where the season might be going. The end of the episode did have some tension. The real world is pretty darn dangerous and I’m surprised Kirito and Asuna don’t carry around stun guns, pepper spray, or something. They’ve got enemies. I guess we’ll see next episode how Kirito will survive this attack and the aftermath of it.