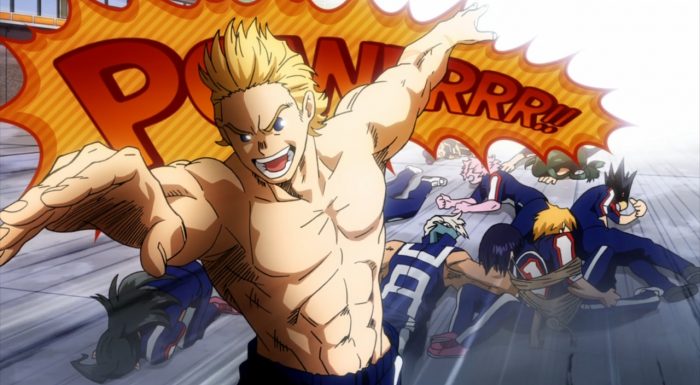 And that’s it for another season of Boku no Hero Academia. This was a good stopping point and allowed us to get a taste for what will be coming in Season 4. With this episode we got to meet the current top end of the UA students. Along with that we also get to see how the villains are undoubtedly growing as well. It’s a scary period for that world in general. All Might is retired and both the heroes and villains are racing to fill the gap. Deku and his classmates are going to be part of this picture. We can get the feeling from this that these work placements are going to be much more intense than even the internships were supposed to be. Not sure how much more dangerous it will be for Deku considering the whole Stain incident. 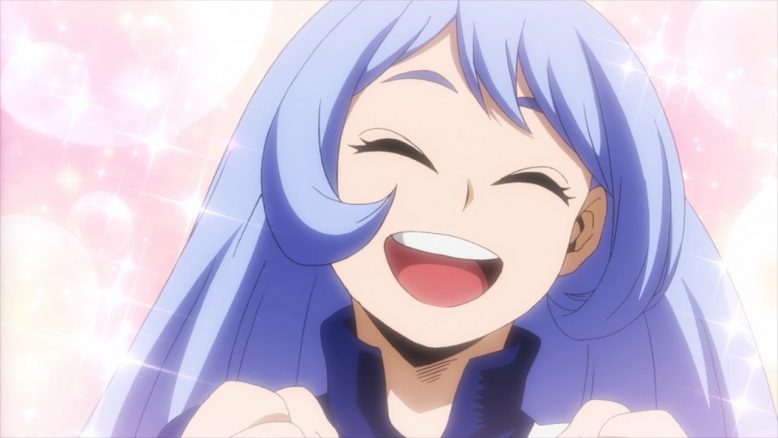 The star of the episode of course was Mirio. In some respects it is difficult to ignore someone who spent a good portion of the episode fighting naked. There’s your fanservice character of the season right there. Now this guy is interesting in a few ways, but I do have one critique. Did they have to try so hard to convince us that his quirk isn’t insanely strong? The ability to just pass through anything and effectively be invulnerable to any attack is really helpful. I’m not underrating that he must have worked insanely hard to make full use of that quirk. But the quirk itself is so darn powerful that his ceiling is way higher than for other people. He didn’t rise to the top of UA with the quirk to materialize potato chips. 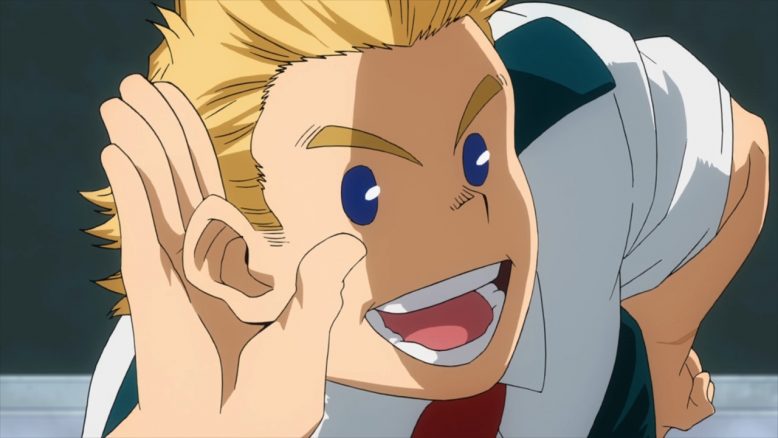 I’ll give credit to Mirio though that he has managed to rise to the top and become a total monster. The guy appears pretty unstoppable as things stand. He’s no doubt way stronger right now than a large chunk of the regular pro heroes that we’ve seen. To say he’s near the top of the pile and ready to challenge for #1 hero is not an exaggeration. He can move fast, attack quickly, and incapacitate most threats before than realistically react. Heck even someone like Tomura would be helpless. Even if he could get a hand in Mirio’s direction it would just pass through and he’d still get punched into the dirt. Having overcome the issues his quirk has and having learned to make the most of it he’s a powerful individual.

No doubt he’s going to be a major figure for the next season. Although in that sense I kind of hope he gets through the next part of the story ok. With All Might incapacitated a new powerful hero could be the guy they use to make an example of to get across how dangerous the next threat is. 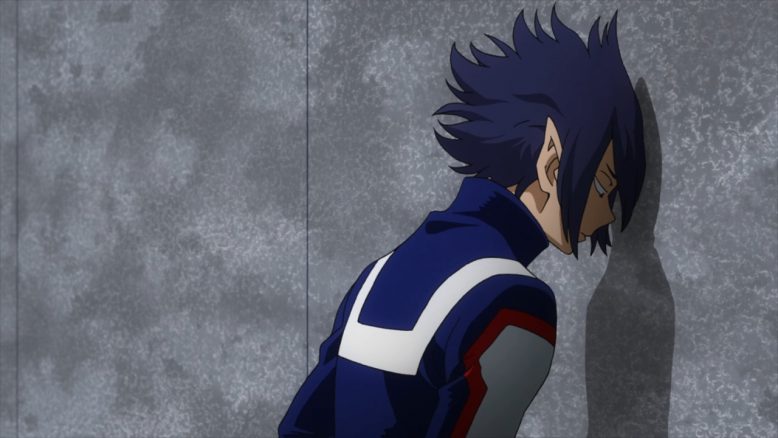 The Big Three…are mostly oddballs. Honestly I’m just going to presume they are mostly people that appear to be idiots but are competent when it counts. I have no idea if either of the other two besides Mirio are worth their hype, but I’m left presuming so. We didn’t get to see much in regards to their quirks, but that’ll be left for the next season. Not that I can’t blame Amajiki for having social anxiety. It’s tough for some people to stand up in front of a class to talk. Not that it’s good for a future pro to have that issue, but he could be a hero like Aizawa that professionally keeps a low profile when doing his job.

Nejire…finds things curious. That’s all I’ve got from her. She’s pretty upbeat, but just runs on random tangents with whatever odd thing catches her eye. No idea how she’d function as a professional with such a chaotic and limited attention span. 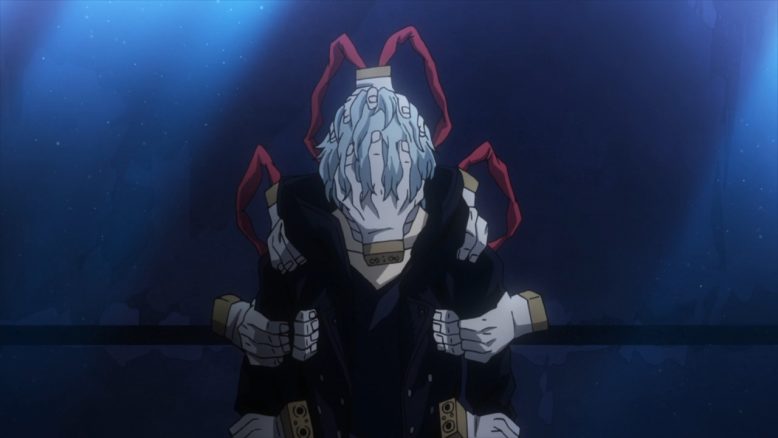 We can get the picture with the villains as well. This new villain Overhaul is likely to be a major figure for the next story. And hey Tomura is apparently trying to up his style factor with a jacket XD. It should be interesting to see how these two interact next season. The League of Villains are starting to grow and mature. With that they are bound to start interacting, teaming up with, and clashing with their rivals. All sorts of villains are making their moves now and if these two team up that can’t possibly be good for the future. But there isn’t too much to make of it right now. All we know is that this guy is apparently a big fish and the heroes as well have their eyes on him. 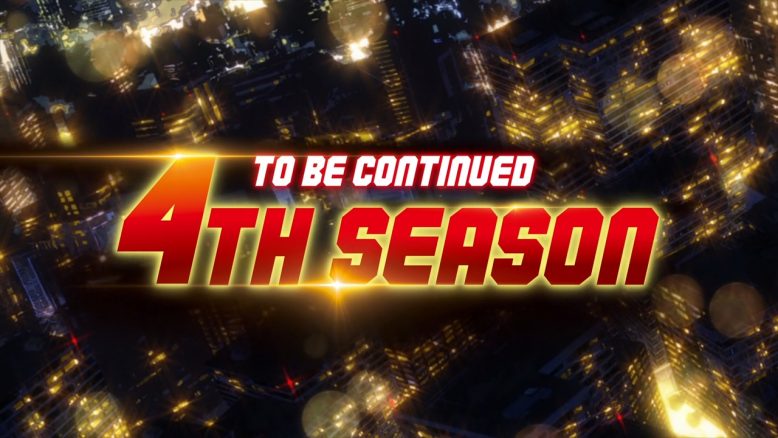 In terms of the last episode for the season it was solid. The fight wasn’t the most exciting of the season and the drama wasn’t through the roof either. But it was a good way to introduce the top of UA and set up the next arc. With this the story should be able to just jump straight into these work placement things and push the next part of the story forward. It’s going to suck waiting for Season 4, but what can you do? 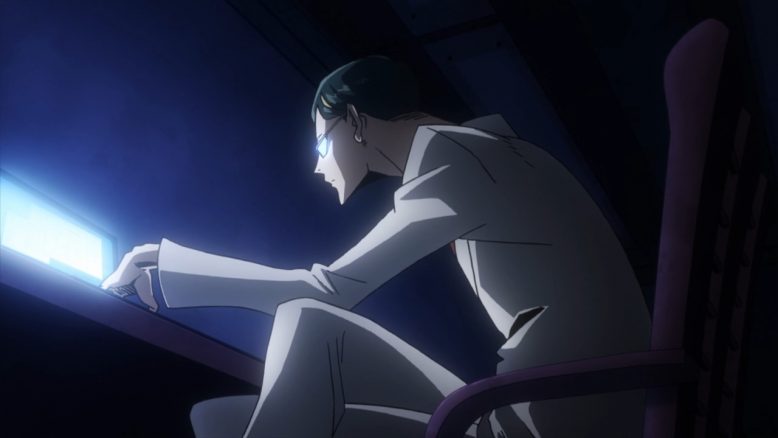 Final Thoughts
This was another strong season for Boku no Hero. In some ways this really changed the landscape for the franchise. All Might got into his last big mission and forced into retirement afterwards. The shock wave of which only barely seen at the end of this season. I’d expect Season 4 to really take things up a notch and show how the world is reacting to this change. With this a lot is bound to change just for the main cast. While Deku still has his mentor physically around, he has to start preparing to fill his shoes. There won’t be any further miraculous rescues by All Might in the future. The show is setting up a new era and we’ve got a front row seat to seeing how things will unfold. 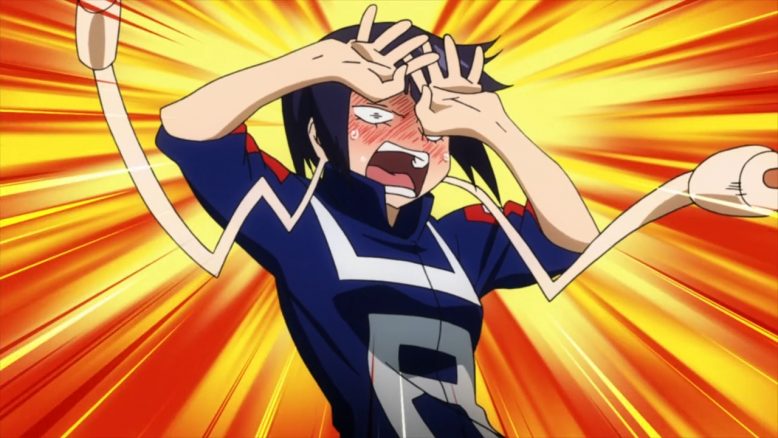 The season was pretty busy. We had the training camp attack, Bakugo being kidnapped, All Might vs All For One, the license exam, and even a Bakugo vs Deku showdown. We got a lot of great fights and some nice character moments. As much as the fights were fun the emotional struggle of All Might in his last big fight was well done. That fight alone was worth watching the third season. You could feel just how All Might truly was the pillar of society and I loved seeing him win that fight by essentially learning from Deku. That kind of trickery that won him the fight was exactly the kind of thing Deku would do. 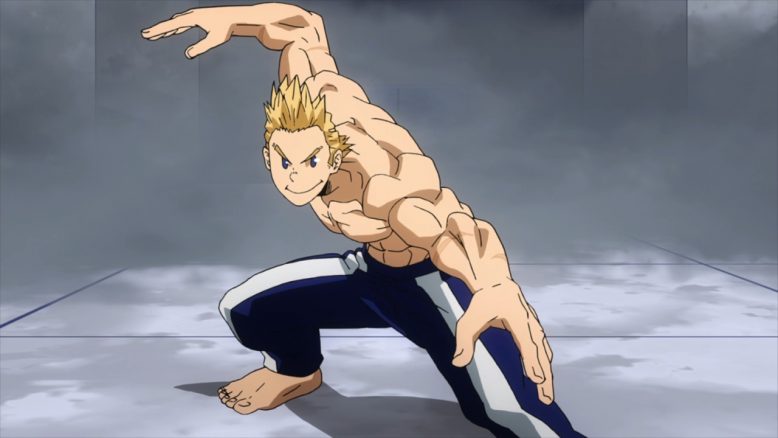 Deku might want to ask this guy about workout tips

But beyond just that one fight the season was a lot of fun. The license exam did a nice job adding new characters and continuing character arcs. I still don’t love how Ochaco’s solution to her romantic dilemma was just to try shelving her feelings for now, but such is. Todoroki’s continued character arc was nice to see. Just because he’s had some nice development to this point doesn’t mean the show has to stop developing him. He’s going to continue maturing and here’s hoping we can see more of that next season. Even if he and Bakugo do need to wait in order to get their licenses. 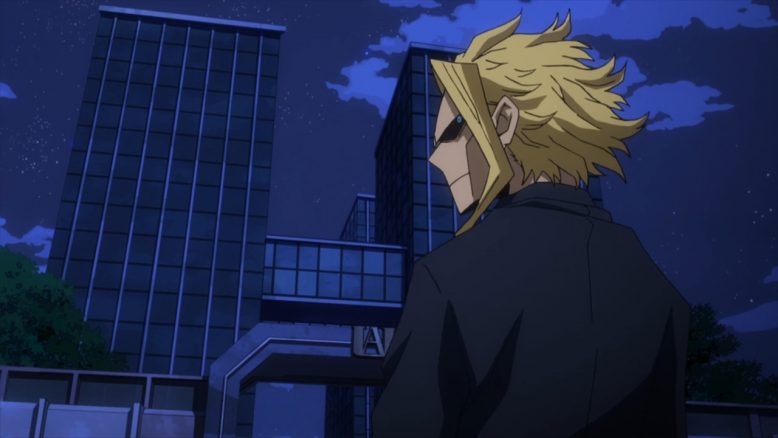 Speaking of Bakugo…this season finally is giving me more things to like about him. And honestly the show is also acknowledging that he’s not going to turn into a great hero if he can’t control his temper better. If he’s just yelling at people all the time then he’s not going to be trusted. It’s fine if he never becomes a cheerful hero, but he’s got to be able to reign in that aggressive personality. But what I did like from Bakugo is showing how hard the retirement of All Might hit him, his guilt, and frustrations due to All Might acknowledging Deku. He really opened up in later parts of the show. That he’s actually becoming a real rival to Deku instead of a former bully is nice to see.

I really enjoyed S3 and can’t wait for the next one. I’m not sure where the story will go, but the hype levels are set. This is a world without All Might and Deku has all kinds of room to grow. If these work placements work out then we could see the main cast maturing by leaps and bounds. There’s no telling who might get more character development next season. All I know is that when this show is back, I’ll be ready to enjoy watching it.