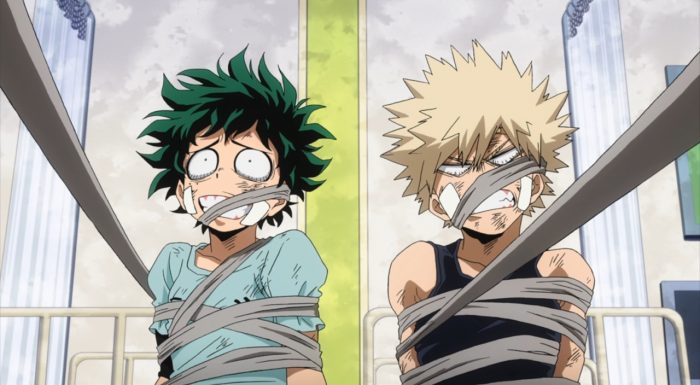 This really is the kind of episode that makes Boku no Hero such a great show. Of course the action is fantastic, but they have layers and story purpose along with that. This is how you start to mature young characters and turn the rival character into a person you want to see reach their own success. Out of all the episodes in the show so far this had some of the best moments for Bakugo. There’s no doubt I’ve had a mountain of issues with his past and present behavior/attitude. He was miles away from being a heroic individual when the show started. It has been a long and painful slog for him to take the smallest of steps towards maturing as a person. But in a lot of ways it felt like this episode was a critical point for him. 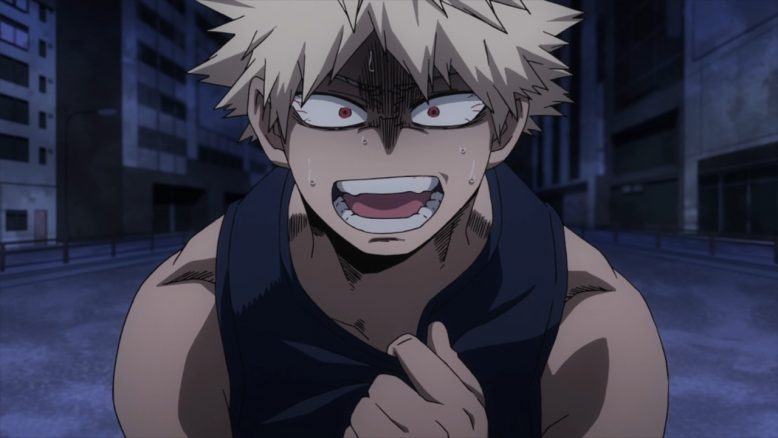 A much needed moment for Bakugo

There was a lot of emotional baggage to unpack in this episode. It is no wonder that Bakugo was at the point of matching his quirk and blowing up. You start off with the massive hit that Bakugo being captured lead to All Might’s retirement. Now that’s not exactly the case and All Might himself made fair points later. All Might was already past his limit and was running on an expiring clock. Maybe he could have kept going at this rate for a few months or even longer than that. But All Might was always going to run out of gas and maybe it was for the best for him to use everything he had capturing All For One instead of some random mugger on the street.

But it is no wonder this was eating so intensely at Bakugo. The last thing you want when idolizing someone is being the reason they can’t do what you idolized anymore. It’s be like making the pro leagues as an athlete and in a moment of stupidity you end the career of a player you grew up idolizing. All the more frustrating in this case because Bakugo wants to win and be strong. Being captured doesn’t match with that and needing to be rescued doesn’t either. That it all lead to All Might’s retirement had to hurt even more. 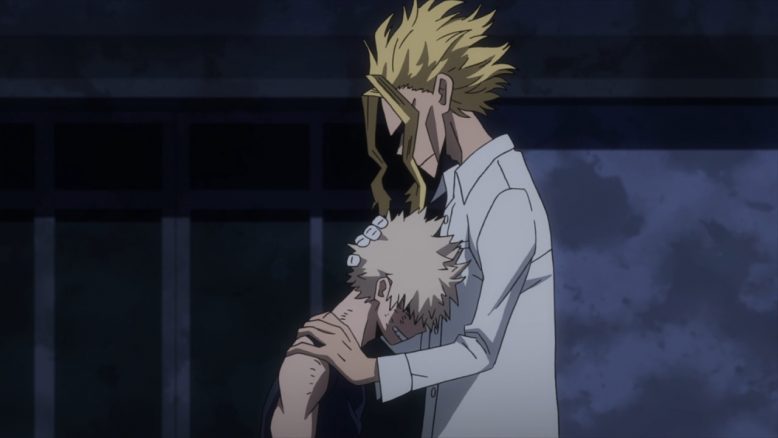 That’s just the first pile on the baggage train for Bakugo. Throw into that the fact that All Might chose to pass his power to Deku and not Bakugo. Now honestly there’s good reason for it. Bakugo already had some serious issues when the show started. Give him One for All and things could get scary. But the whole thing hits on an emotional minefield that exists with these two. It raises even more painful questions such as whether what Deku idolized about All Might was more ‘right’ than what Bakugo idolized. They both saw different sides to the same person and yet both wanted to be like him. What aspects you feel are more important differ to the individual. Saving people is important, they are heroes after all. But stopping bad people from doing bad things also matters for that job.

And that’s another thing that needed All Might coming in later to delve into. Both of them are right in a sense. If a hero is lacking a desire to help people that is a problem for them. At the same time if a hero is lacking the drive to win then they might end up dead and that doesn’t help anyone. In a sense both need to develop a bit of what the other person has. Deku needs to keep developing that drive to win and in a sense is getting there. Bakugo needs to develop a will and desire to help people. He needs to learn how to care more about people that need help. But if the two of them can manage that then they have the tools to reach the top. Both of them have the assets and the ability to become the greatest heroes alive. 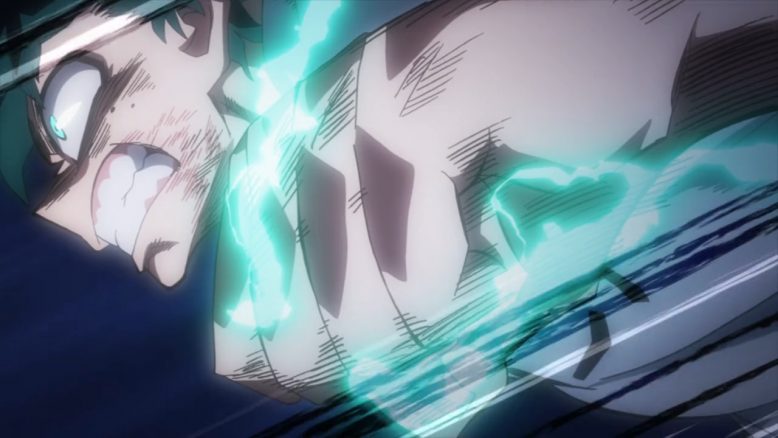 The whole thing was a difficult showdown for the two guys. They’ve clashed and frankly failed to properly communicate all their lives. No ignoring the straight up bullying that Bakugo was inflicting on Deku. And really they hadn’t directly had the chance to go at it since the first season. So the action didn’t let us down at all. The fact that there was so much history between these two made it work. If it was just a mindless conflict it’d be cool, but forgettable. What this show does is make sure there is a story within the fight itself and the individuals have something fueling them. This was a chance for Deku to test himself against someone he wants to overcome. And the both of them really showed what they could do. It was a fight though running off emotions and thus it really went back and forth. 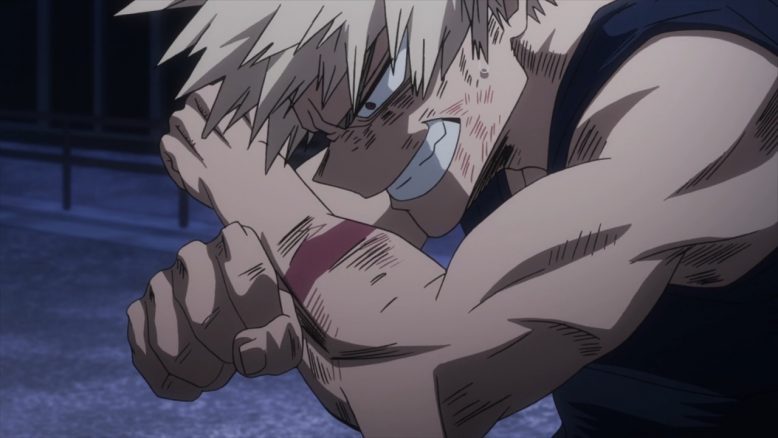 In some ways surprised I wasn’t sure who I really wanted to see win this thing by the end. I suppose who won or lost didn’t really matter. But it was interesting seeing how the two measured up and had different advantages at different times. This was a good lesson for Deku that he can’t just spend fights thinking too hard the whole time. There often isn’t going to be time against faster enemies to ponder his options. Sometimes you just have to move and force the other person to react. Bakugo for good reason had the early advantage, but Deku took control of the fight at times himself when he picked up his % usage of One for All.

I suppose the one thing I wonder going forward is how things will measure up. Deku still lost, but again he was using at most 8% of the max power stored in him. If he can get to the point where he can use 100% all the time then that’s a monumental amount of growth. How can Todoroki or Bakugo really hope to measure up to that? Is the show really going to the direction of a group of comparably strong heroes leading society? Or is it just going to be Deku standing well above and beyond the rest of his peers? The one thing Bakugo has is that he is incredibly smart about how he fights so maybe he can just reach heights that seem impossible now. But one has to wonder how the show is going to handle the power situation down the road. 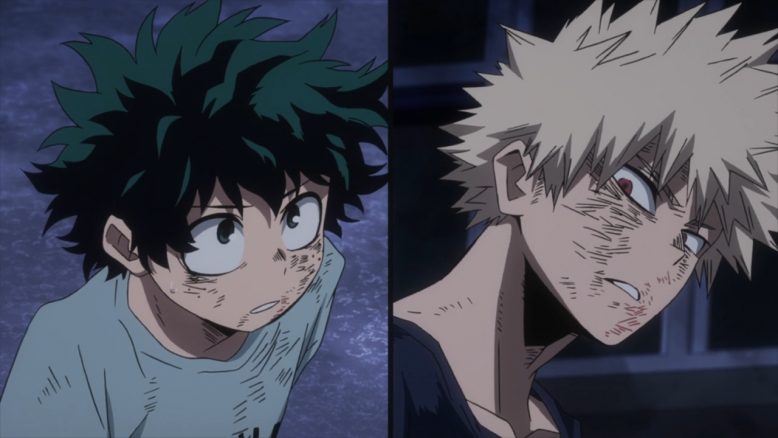 Important growth for both of them

The big thing though was that they did spend a proper amount of time on the aftermath of this. For better or worse it was time to let Bakugo in on the whole story. In some ways I can respect Bakugo more that he thought Deku was crazy to tell him anything about this in the past. And this isn’t the most insane thing ever. There are people around All Might that know the situation. Bakugo is just joining a very small group. While he is an incredible hot head at times, he isn’t an idiot about secrecy. I have no doubt that the information is safe enough with Bakugo. And the idea of these two progressing into proper rivals isn’t a bad thing. They can properly push each other. That’s something much needed in the currently unstable time. 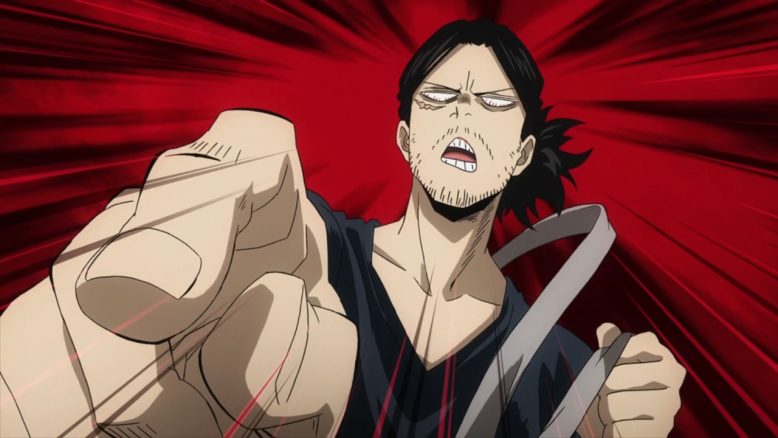 It was a great episode. They really nailed it in terms of the action and the emotional impact. There were some consequences for the two including short term suspensions, but it worked out fine. Both of them can mature a bit from this. And it’s better to have this sort of incident now in a relatively safe location than later in a more dangerous one. Who knows where the story is going from here on out, but we can expect it won’t be easy or safe for the main cast.