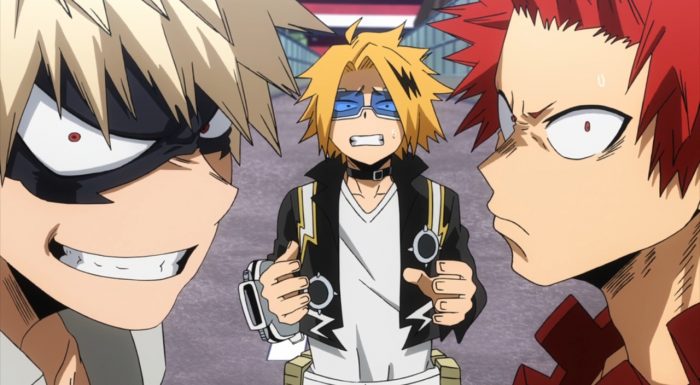 It was a nice surprise to have this episode focus away from the core guys to show the impact individuals like Deku or Bakugo have on those around them. Aizawa made the point of how those two are core individuals that spur their classmates to action. And this episode just let us see those classmates step up during this first test. While Deku and Bakugo did pass in this episode, the episode wasn’t about them. They did play a role in punching their tickets to the next round. But the episode was much more about Kaminari and Aoyama. I would not have bet going into this arc that these two would get moments to stand out. It is a good thing though since Kaminari had been the butt of everyone’s jokes for a while and Aoyama had just started standing out as a character during the training camp attack. 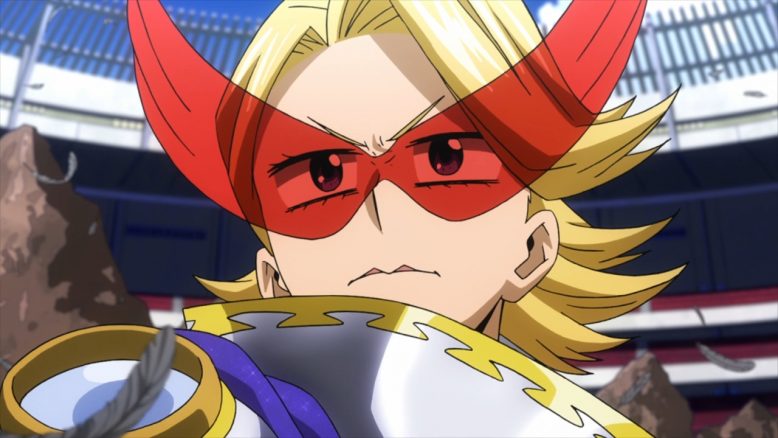 Along with Iida, I don’t really know what Aoyama is comparing himself against. You get some bits from that brief flashback, but not too much. In what way was he different from everyone else? Having a quirk certainly couldn’t be it since most people have them. Maybe the fact that he appears to be a foreigner growing up in Japan? Or could it be because his quirk seems to need that special belt to function properly? There aren’t that many kids in Class A that need eqBoku no Hero Academia S3uipment at all times like Aoyama does. Regardless I’m glad the guy found a moment to feel good about himself. We saw him reach a point of being terrified and trying to help a bit during the training camp incident. But here we saw him willing to sacrifice his chances of passing in order to try and help Iida succeed. 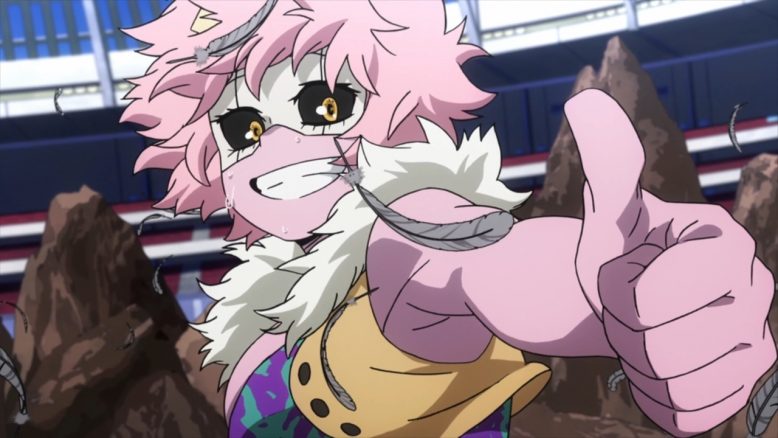 Nice timing with Class A showing up when they did. Not a bad thing to have Aoyama’s sacrifice play be the thing that allowed the class to reunite. It was a risky play and partly why none of the other students tried something like that. Although not too many of them could fire that kind of signal flare into the sky. It did show the class unity for them to see that signal and pull themselves together to go help out. Who knows how many of the class would have passed without Aoyama gathering them. I’ll give credit to the class for stepping up and doing something though. I also appreciate Iida for running around the whole time trying to help gather his classmates. He’s trying to live up to his ideals as a hero and become someone worthy to inherit his brother’s name. 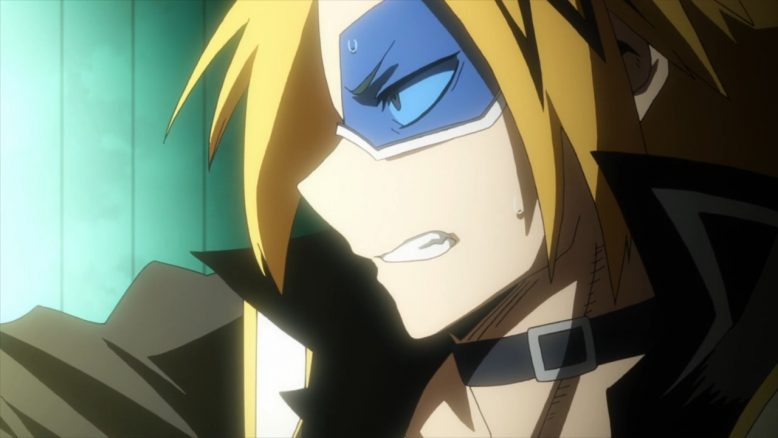 I’ll give credit as well to Kaminari for his actions in this episode. The poor guy is a bit of an idiot and is often the punch line to a joke. But he is also trying to become a hero and isn’t a bad person. I’m glad that he’s finding ways to get stronger and that it involves being smarter. The biggest issue for Kaminari is his brainpower. If he overuses his quirk he becomes a total idiot. He’s risking falling into the issue that Aizawa brought up with Deku. What’s the point if in trying to save someone you leave yourself incapacitated? There’s no real difference between Deku’s busted limbs and Kaminari leaving himself in stupid mode. Kaminari needs to use his head more and use his quirk in a way that leaves his brain working fine.

This little fight allowed him to show his growth. He was sharp enough to use what Bakugo left him along with his new gear. This time Kaminari helped to save the day. He delivered enough of a jolt to allow Bakugo and Kirishima to recover. And honestly with the three of them a bunch of students released from that disturbing quirk were no real challenge. They didn’t need to show the rest of the fight because with Bakugo there…that wasn’t going to be an issue. 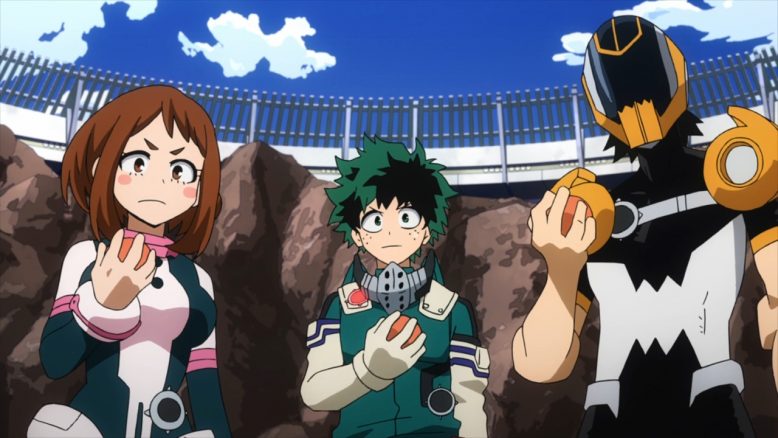 And even Deku passing wasn’t really about Deku’s actions. Oh sure he was doing a great job being distracting and keeping people offguard. But it was Sero’s tape and Ochaco’s planning that made them pass with ease. She took what Deku asked and fulfilled it without hesitation. She has both faith in Deku and his judgment. If he thinks she and Sero can capture a group of people then she’ll make it happen. What I love is that she did such a good job of it that even Deku was blown away. He was hoping to capture enough for them to easily pass. But in the end they just captured a stupid amount of students and made passing a piece of cake. Not avoiding giving Sero credit though. His tape was critical to this capture plan. 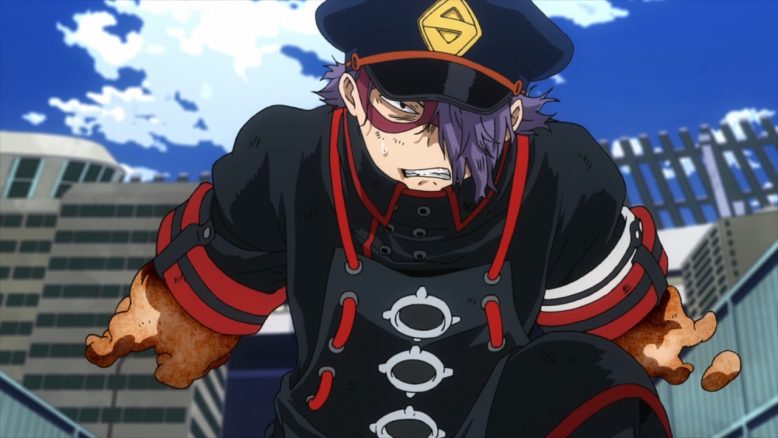 So that was a pretty fun episode. It wasn’t as focused on one team like the previous episode, but it worked pretty nicely. We got to see how events unfolded for the various UA students still needing to pass. Sure it was a beautifully ideal result with all of them making it through, but I think it also makes sense. This class is special. I’m sure many previous years the UA students were more experienced (2nd years and such), but they probably weren’t as united. This class has suffered numerous attacks and has had to come together. They have strong personalities that force growth and change. They aren’t like many of the other classes or even past UA students. This group will protect each other and overcome adversities.

Now we get to see how they handle the rescue portion. That might be tough on Class A. They’ve been attacked so much that their focus has been on combat training first and foremost. The intention with classes like at USJ was to focus on rescue work…but they’ve just been limited in what they can do. Hard to focus on being a better rescue worker when you are more worried about not being killed by villains while on class trips.