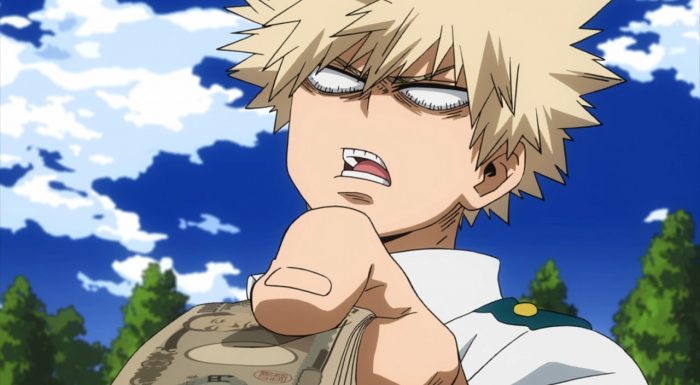 This was a good breather episode after all the intensity we’ve been through since this third season began. At the same time I like how the episode does have purpose and emotional value to it. It wasn’t just going around having silly fun about room allocations. But rather it shows the emotional weight and impact of the past arc on the various characters. It wasn’t as if there was simply a big event and life just goes back to normal. The characters went through experiences, made decisions, and have regrets. There are consequences of choosing to act, choosing not to act, and for things said along the way. The end of the episode just worked because it was a chance to make feelings clear. 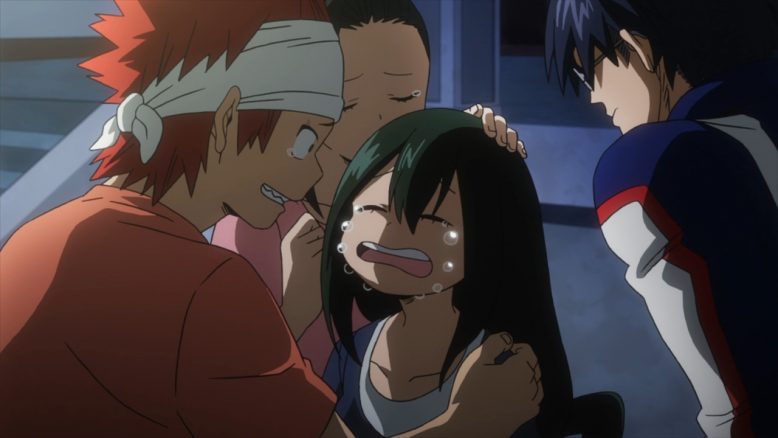 There are a lot of moments that worked for me. The scene at the end with Asui was really strong. She has always been the type that says what she thinks. Now for a lot of people it can be considered good to be able to get your thoughts and feelings across. But it can lead to feelings of regret and potentially damaging relationships. Even though she was simply saying what she thought, it can be incredibly awkward to speak again afterwards. Things worked out in terms of getting Bakugo back, but there had been a divide in the class about what the right thing to do was.

I did feel for Asui during her little emotional speech. Feeling that she may have stopped them from doing something they believed in was eating at her and even finding out later that they did go didn’t make it easy to just immediately make things go back to normal. Credit to Ochaco for gathering the group together and helping give Tsu the chance to speak her mind. This latest arc was a difficult experience as a whole for everyone. That line Tsu threw out at the hospital didn’t just stick in the minds of those that went, but was eating away at the person who said them. 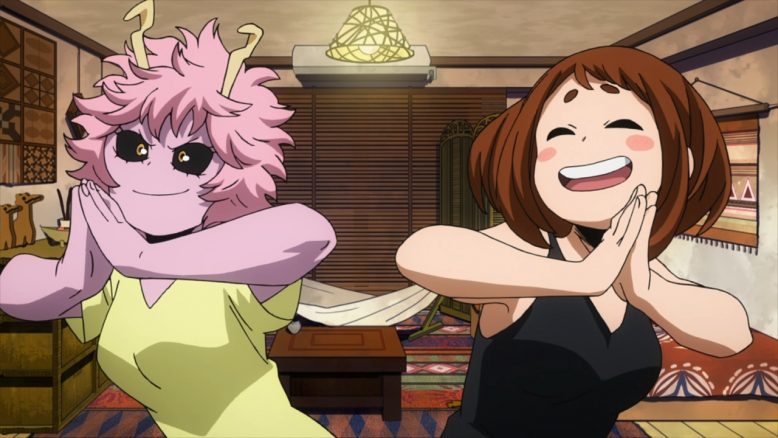 I’m glad the silliness did have a purpose. It was a chance for everyone to just come together and say “let’s start enjoying ourselves again.” They were being over the top and goofy, but that was the point in and of itself. The summer camp and the Bakugo rescue situation was taxing in so many ways. They were faced with a legitimate threat and had to face some difficult questions about what the right thing to do was. Here they could just be kids again for a moment. It’s nice when the most terrifying thing for Deku was everyone seeing his All Might fanboy room. That’s the worst thing that happened to him that day. A major step up from a couple episodes ago. And hey it also served to just get into the heads of the cast a bit. Many rooms ‘made sense’ for the characters, but some surprised. 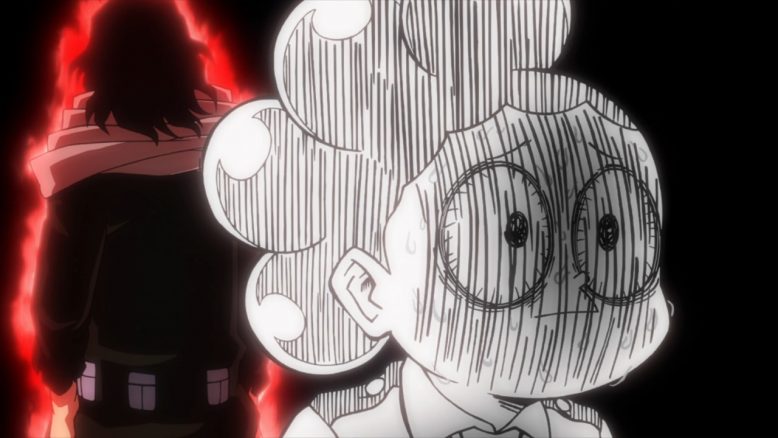 I know the early bit with Aizawa will create some various opinions, but I did find it interesting. It does very much fit with Aizawa to confront the whole class. That kind of max expulsion isn’t even out of character for him. He did toss out an entire first year class due to seeing lack of potential in them. And it does throw a bit of a curveball. His focus wasn’t just on the students that put themselves in danger and went after Bakugo. Rather his point was focused on everyone that knew about it and didn’t either report it or stop them. I think the slippery slope angle does come into play here. A point has to be made that they can’t take the law into their own hands. That isn’t what a pro hero is in this setting.

They have to be able to work within the rules. Otherwise you get dangerously close to becoming like the followers of Stain. People who think they are doing the right thing and returning heroism to what it should be, but people who don’t follow the law in doing so. Now not sure how things really played out behind the scenes since Aizawa can be a softy at times. But I do think he wanted to give the class a legit scare. The only people he was giving a pass to was the one that got kidnapped, and the two people that were unconscious during this whole thing. Class 1-A was about to turn into Bakugo, Jiro, and Hagakure in a hurry. 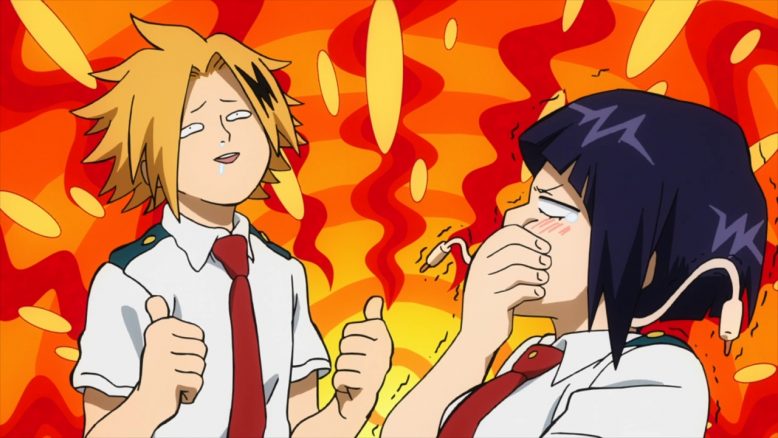 Now this did give honestly my favorite Bakugo moment in the entire show to this point. And I’m not even exaggerating in this case. We got to see him acknowledge what the class (and in particular Kirishima) was feeling. Then Bakugo went out and did something about it. Ok sure it meant being a bit of a jerk to Kaminari, but at the core of it there was good purpose to it. He helped ease the tense mood and he used that chance to repay Kirishima for money he spent to try and help him. Now I don’t think he robbed Kaminari and it was probably his own money. In the end this was probably the best moment for Bakugo in my eyes. It showed that he is growing as a person and can mature. 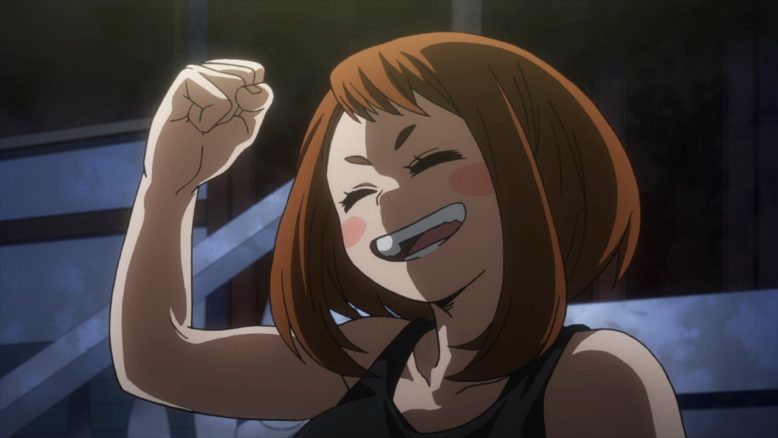 Not a bad episode at the end of the day. They made a point that we’re moving back towards training and getting these kids provisional licenses. Things have gotten pretty crazy, but the cast can resume moving forward as young potential heroes. We’ll have to keep watching and seeing how things will play out for the world with All Might’s retirement more apparent. I’m so glad this show is continuing into the summer. Going to be an enjoyable carryover.