Nanatsu no Taizai: Revival of the Commandments – 21 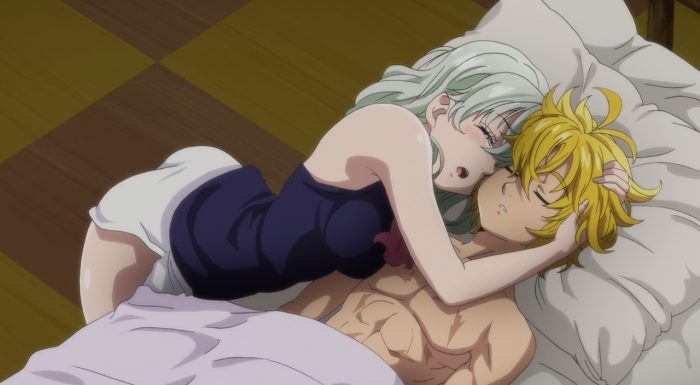 What a great time to be a fan of this type of show. At the same time that we’re seeing an epic confrontation in the Boku no Hero series we are being set up for Escanor taking it to the Commandments once again in this show. The end of this episode is one that just leaves you desperately wanting to see the next one! Now this wasn’t a poor episode or anything, but it just sets things up so well that the next one is the major focus. With Estarossa’s commandment keeping everyone from being able to act…Escanor just waltzes up and prepares to start putting down the rest of the Commandments. They can talk about his pride, but choosing to attack Liones during the day was unbelievably cocky of them. Not surprised of course that demons can’t stand running away from a human. 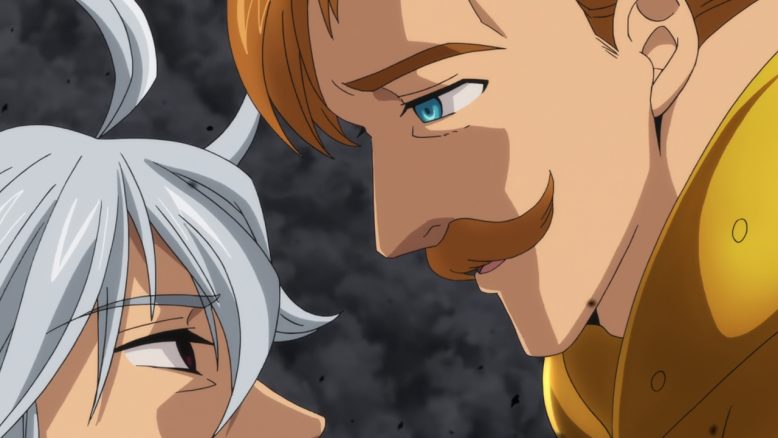 This will be fun

And this is turning into one heck of a crazy situation. The Commandments aren’t just sending a few guys. They appear to be there in force and this could turn into one heck of a crazy fight. In theory Escanor could handle most of them, but I can’t imagine the other Sins won’t get their chances to get involved. It just demands that things are broken down into showdowns that fit for the Sins at their current abilities. And really so long as they aren’t going up against Estarossa they should be able to direct their anger right at these Commandments. They have lost their captain for the time being and it really is now turning into a brutal fight. But the most hype thing is seeing the Sin of Pride show the Commandments what he is capable of doing. This should be fun! 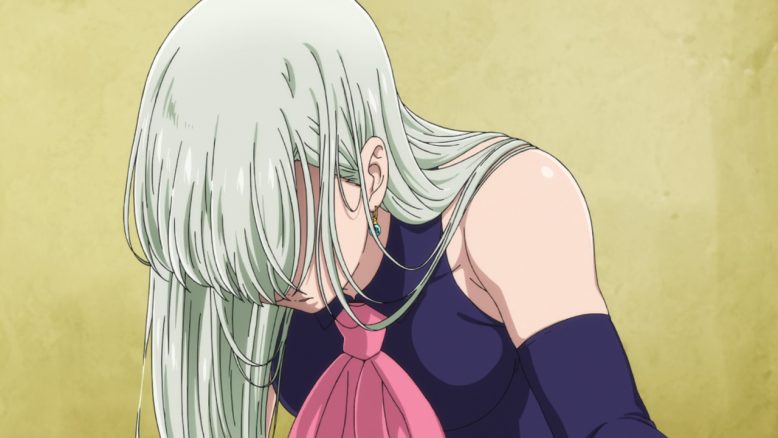 Of course the big focus of the episode was on Elizabeth carrying on. While I think someone with crazy healing powers could be more useful around the front lines, I can kind of get her mentality. Going around and trying to help people isn’t a bad thing. There are a lot who are dealing with the stress and terror of their situation. Honestly I can appreciate the idea of people just needing to drink away their worries in that situation…It is a bit dangerous though with just Hawk there with her. No matter how cocky he is…not really a powerhouse. Considering the situation people could go crazy and just try to ransack the bar. Also…couldn’t she go ahead and learn to cook better than Meliodas? I’m glad though that she found the resurrected Zaratras since he’s strong enough to look out for her. 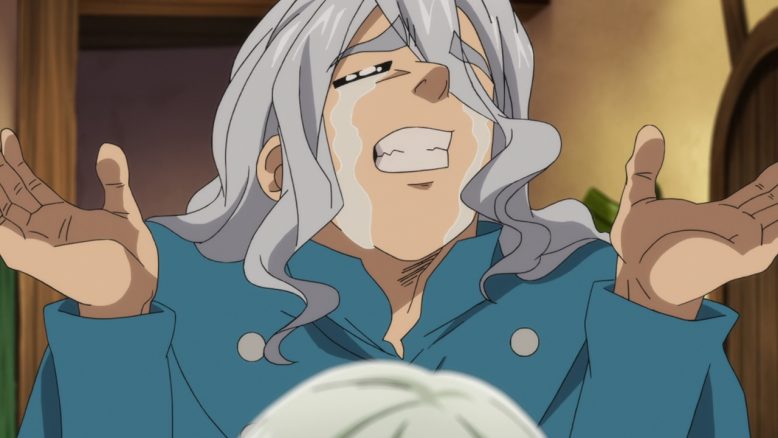 Very much like Taizai to go full silly with the former Great Holy Knight. Talk about going over the top with mutilating his dead body…If he was just poisoned was there a big need to just use dozens of spears to impale his body? Well I suppose that is good for dramatic effect and it isn’t as if the demon clan would care about something like that. And honestly it works well enough. We’ve opened the door for people to start coming back from the dead anyways. So at least he can contribute in the short term. No idea how he matches up in terms of power, but another useful hand can’t hurt anything. 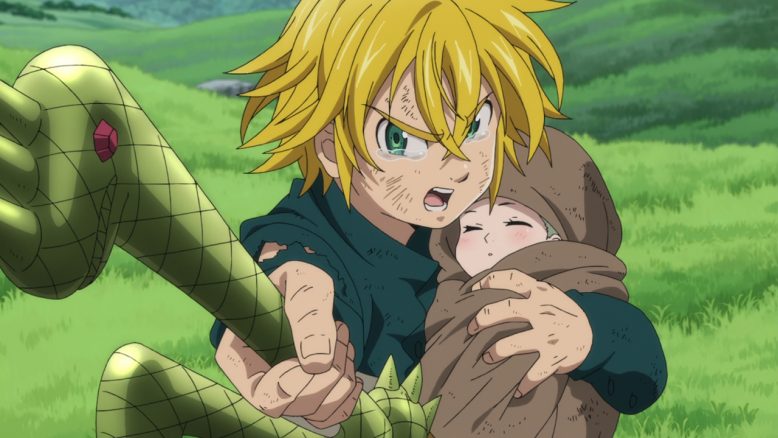 The big thing he did contribute was flashbacks XD. Though to be fair this did answer some questions and raise a ton more. So it wasn’t as if Meliodas just happened to meet Elizabeth when he came to Liones. But rather he had her from the start and allowed the King to adopt her. That is rather odd since we didn’t see any child that he was around during his previous flashbacks and even stranger is that Elizabeth was the only survivor of Danafor…This is just getting odd. It is all the more mysterious since he was extremely protective/possessive of her. But hey let’s see where things go. We did learn quite a bit about Meliodas always looking out for Elizabeth and also his curse.

That curse being pretty clearly shown off during this episode. Normally you’d say that immortality is fine and dandy, but instead there is clearly a cost. It’s interesting how this demon father of his talks about ‘that woman’ or taking his emotions each time he dies. So apparently it is possible for him to die (like we’ve seen) it just doesn’t stick for very long. Not quite on the level of Ban who can recover almost instantly from devastating physical damage. But still the fact that he’s lived for 3000 years speaks to his immortality and the curse that has been placed on him. Hopefully Meliodas can get out of purgatory quickly and in mostly the same state. He could be handy in this situation. 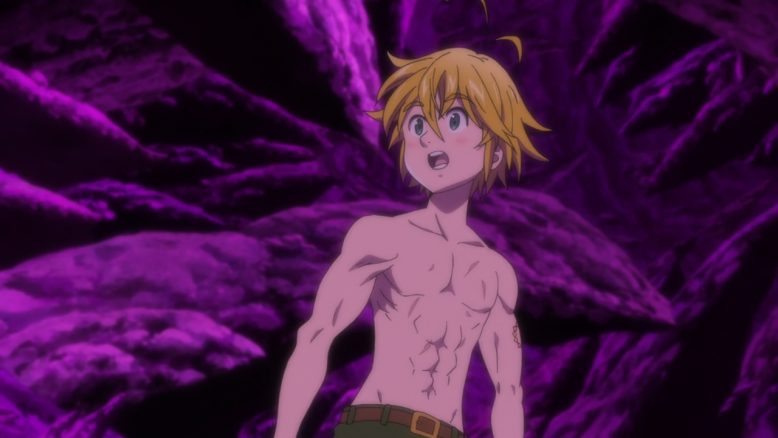 Anyways this was a pretty strong episode on the emotional level. Elizabeth has been through an emotional ordeal and she’s doing the best she can. And honestly being able to believe that he’ll be back should allow her to stay focused. But honestly the biggest moment and most exciting thing is Estarossa vs Escanor. That should be pretty amazing to see. I hope they can do it the justice a fight this exciting deserves.