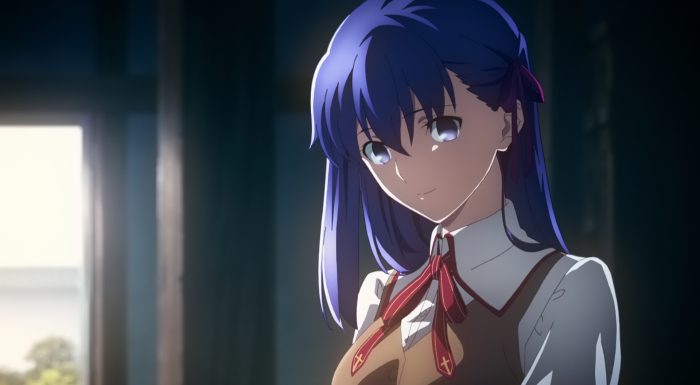 It really was only a matter of time before Heaven’s Feel route of Fate/Stay Night was adapted into anime form. In this case the result will be three movies covering the story. They’ve got a strong animation studio handling it. This movie somewhat passes the torch of leading lady to Sakura, but not quite yet. Sakura is more of a presence in this movie, but it still somewhat passive of an existence. Also, my experience after seeing the first movie is that pacing is still going to somewhat be an issue despite the amount of movies being dedicated to this. There were points when watching this that I felt the movie was rushing it. 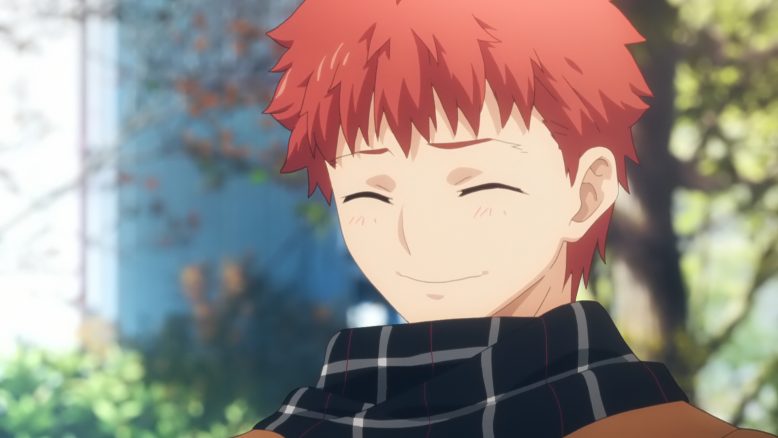 Let’s start with some good points here. They do a nice job setting up Sakura’s presence in Shirou’s life. Other routes and arcs have just had her being part of his life. We have this girl that is younger than Shirou and not related to him directly is showing up at his house on a regular basis looking after him. That’s a bit odd and this gives at least some background as to why. Now it doesn’t quite cover everything, but it’s a start. We know that he got hurt and she started showing up to try and help him out. I don’t think we still have a complete picture as to why. But at least we know the how of Sakura showing up and integrating herself into Shirou’s daily life.

We do also get some basis for her attraction to him. Not sure the whole flipping over a bar thing was particularly striking as a reason to be interested in a person…but hey to each their own. Not as if this is the first time we’ve gotten a hint of that being the starting point of a girl developing interest in this guy…So hey, let’s just work with it. The good thing here is that Sakura while not an active force in this movie, is a constant presence. Especially after Shirou encourages her to stay at his place for the time being we get more reactions from her. She gets understandably upset and worried about what is going on with Shirou. And you get a picture that something is pretty off with her background and ‘family’ situation. 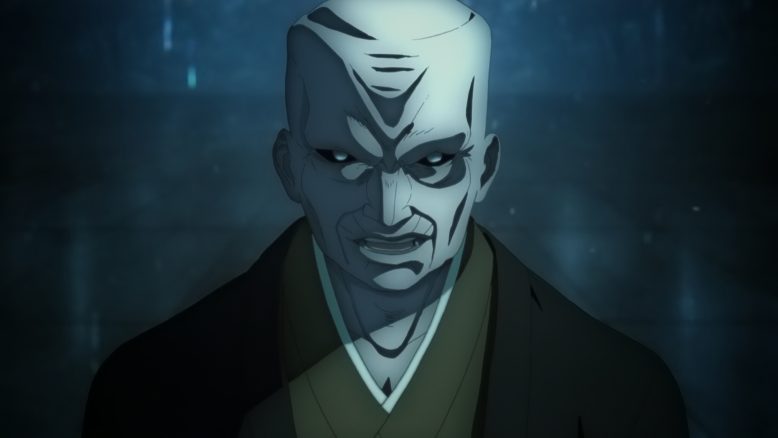 The movie also does a good job creating a sense of unease. Things aren’t going well. Whether you’ve seen the original Deen adaptation or UBW, it should be easy to see that things are pretty off. Although I will say that you really should at least see UBW and possibly Fate/Zero before watching this. For the sake of getting the story going they do skip/montage some familiar scenes. Thus if you don’t know what is going on you are going to be a bit confused as to how and why Saber showed up. You might be a bit lost what is going on with Caster and the swordsman outside the temple.

Still, the movie does manage to get across how wrong things are. Assassin takes out Caster really darn quickly. It is one of the few times in the movie that I feel his abilities and tactics were on point. He stealthily got around, took care of her Master and basically forced her to do what he wanted by holding his life hostage. The moment she did…he took her out in short order and finished off her master who had no further value to him. Lancer gets taken out pretty easily as well and we saw how things are not going well for Saber either. Then you have creepy Zouken using corpses in unsettling ways along with a scary freaking shadow that is up to no good. There’s just a lot of individuals and forces at work that shouldn’t be there. 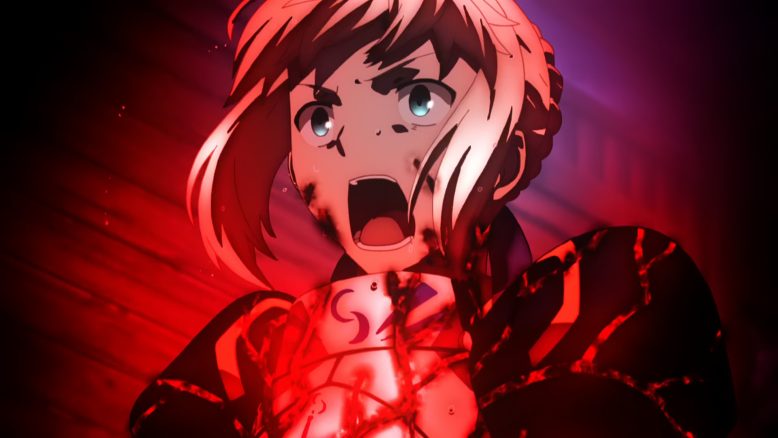 There are things that didn’t work for me though in this movie. The action at times just felt hurried. It seemed as if they were in a rush to get to the next one and the fights were either very short or had a hurried pace that didn’t quite feel right. My biggest issue honestly was the efforts of Lancer and Saber when facing Assassin. Lancer chases this guy down through the whole darn city before falling into his trap. Saber as well doesn’t exactly appear to overpower Assassin at any poin. With Saber sure they showed only part of the fight with some of it being seen as silhouettes past closed doors, but those silhouettes did not tell a story of Saber having a distinct advantage. Plus why did Assassin say that taking a blow from that wind would be dangerous…if his skill prevents wind from harming him?

But anyways I just didn’t love these fights. Rider when she showed up displayed an overwhelming beatdown that shouldn’t have been shocking. But after seeing how Lancer and Saber performed against him it made her seem like a far more powerful servant than either of those two. Which is again rather odd since Saber smoked her in one shot earlier in the movie. Lancer’s fight was simply worse. It just didn’t seem believable that Lancer had to chase him down over that much distance. They clashed enough that Lancer should have had a chance to inflict the same kind of “oh crap I’m in trouble” moment for Assassin that Rider did. I didn’t have a problem with how he used the ambushes with that black monster to set himself up a chance to win with his noble phantasm, but getting to that point was the bigger issue. 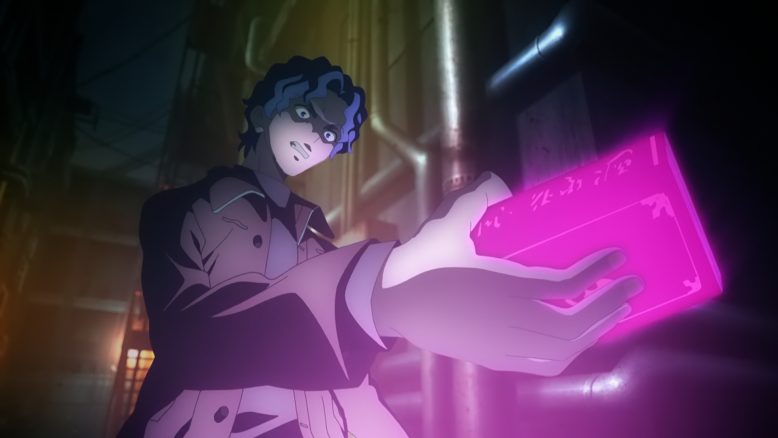 As always Shinji is a worthless scumbag. It is a pretty consistent thing upon any Fate series that this guy is someone you just don’t want to see among the living. He’s a bit more of an obvious dirtbag here than in some other routes since you can see the active abuse towards Sakura. And you get the picture with catching him in the act attacking the captain of his archery team and being willing to try and kill Shirou without much hesitation. Those negative qualities are combined with him being a coward that freaks out when things don’t go according to his plans. The main downside by the end of this movie is that he’s still part of it XD. 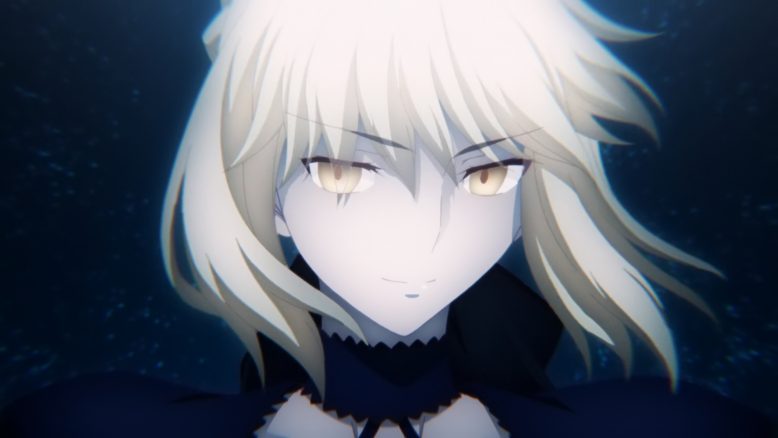 As a whole the movie was fairly good. The visuals are still spectacular with ufotable handling things as well as they always do. Even if the pacing and some of the story elements seemed a bit questionable, it at least looked good. We are getting a fairly different story from UBW or the original Fate arc so that’s also a positive. They haven’t delved as heavily into Sakura yet anyways so there is room to see where her character goes by the end of all this. With the tone we’ve gotten so far with this movie though…I can’t imagine things being all upbeat in terms of her character arc.

I can’t say this movie blew me away. Visually it was top notch. I’m glad they are giving this more time across three movies to tell the story. But I didn’t leave this one hungry to see where things go next. A bit curious about what is going on with Saber, what that creepy monster is, and what will happen with Sakura going forward. My expectations might just be a bit tempered since I didn’t find this movie to be amazing. Glad for those who did enjoy the heck out of it, but I’d just considering it in the good but not great category.