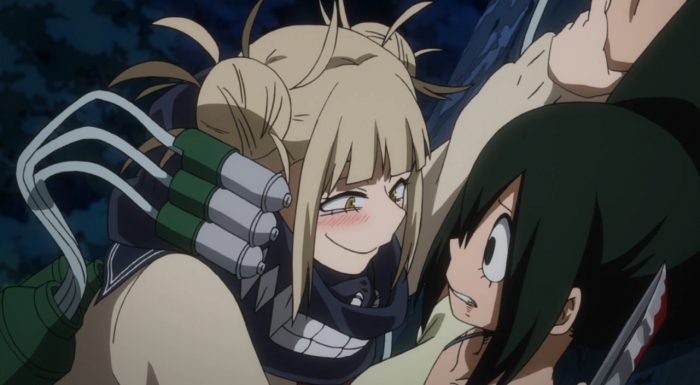 If there was optimism gained from Deku’s victory a couple episodes ago this episode tempered that a bit. Things could be worse, but they also could be a whole lot better. We’re seeing here that this group of villains may have a lot of screws loose, but they aren’t pushovers either. While the heroes are gaining some wins here and there…they are suffering losses as well. They did manage to cleverly use Tokoyami’s loss of control into a win, but you also have Momo who was utterly wrecked by one of those Nomu. Luckily that thing was called off due to the capture of Bakugo since otherwise death could have been the end result for her. It really shows her growth over the past season that even in that state she was still trying to do everything she could. Can only guess at what she had stuck to that Nomu. 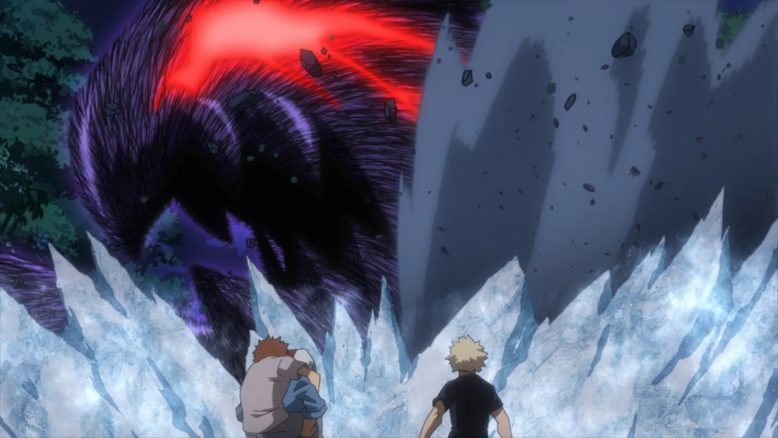 It was still a pretty smooth way to take care of a tricky villain. Dark Shadow is a total beast especially when it is dark out. Of course that kind of berserk uncontrollable power isn’t something that Tokoyami would ever want to willingly use. They were able to abuse it here, but that is a pretty dangerous strategy. Not to mention that is hardly something enjoyable for Tokoyami. Getting carted around with a quirk he isn’t controlling as it goes on a rampage has to be terrifying. Not to mention an unexpected downside to the plan became apparent later. Dark Shadow’s powers being shown off just made Tokoyami an additional target for the League of Villains. 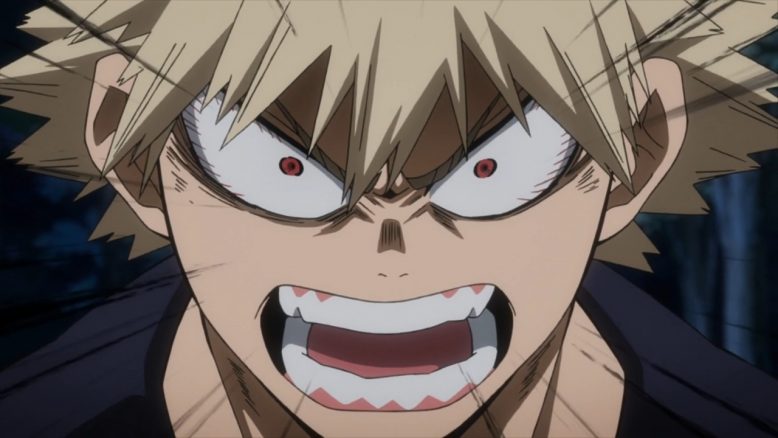 Can’t imagine why villains would try to recruit him

The worrying reveal was made about the intentions of the villains. This isn’t just about attacking promising students (though Deku was clearly a target for that), but rather it was a recruitment drive… In a lot of ways that makes sense. The League of Villains is starting to see the value in having a better small group of elites. They have clearly gotten over using whoever they could find. This group already is pretty lethal and dangerous on all sorts of levels. But on top of that they are seeming to be targeting potential heroes that have dark streaks to them. In that respect it doesn’t seem crazy for them to go after Bakugo. He doesn’t exactly create the impression of being stable or a good person…Turning into a feral beast during his victory ceremony at the sports festival probably was like shooting up a flare to these people… 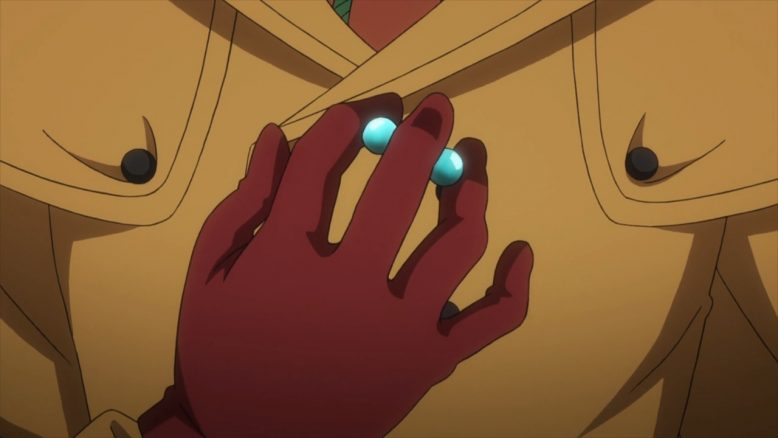 So far Bakugo and Tokoyami aren’t out of reach though. A guy who appears to have the ability to turn people into candy or maybe marbles has captured them. Right now they still have a good chance to get them back. It isn’t remotely ideal landing among a group of villains with the rest heading that way…This is even worse for Deku who is still really hurt. Pushing himself too far and not sure how much he can really contribute in this coming fight. But I can hardly blame him for that one since he can’t just sit around. If they don’t do anything then two of their classmates (presuming they are the only ones being kidnapped) are going to disappear. Though personally in Deku’s shoes I wouldn’t go out of my way to help Bakugo, he’s probably a better person than me. 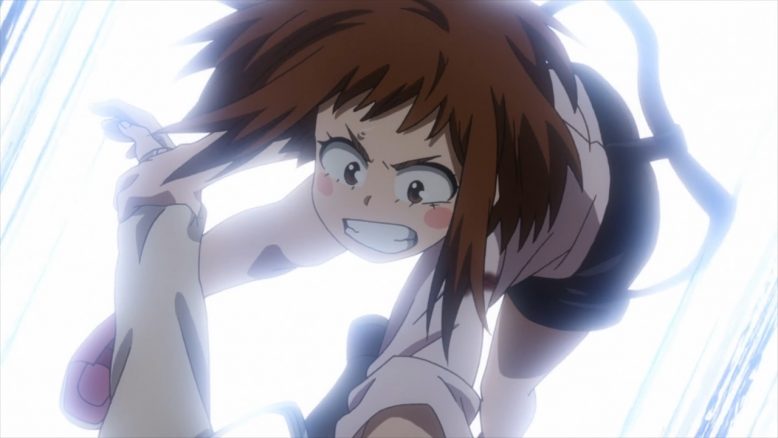 There was some real creepiness going on with Asui and Ochaco. Those two had the unfortunate fate of running into one of the creepiest villains we’ve seen thus far. And that’s saying something when we also had the creepy blade teeth guy in this episode too. I can somewhat get her creepy obsession with Stain since it appears she needs to gather blood as well. Though part of her mission was to gather the blood of at least three people so maybe it isn’t related to her quirk. The scary thing is that we didn’t really see what exactly her quirk does. All we could say for sure is that she is seriously screwed up in the head.

I can’t even blame Ochaco for freaking out. The last thing I’d want to do is holding onto someone that unstable. Yet she didn’t back off, just was understandably shaken up and couldn’t quickly react to that girl’s counter attack. Don’t worry Ochaco, I don’t think you should take any similarities between you and that lunatic to heart. On some level she has the kind of attraction to people that everyone else does….and then she goes into straight up insane. A very much yandere character there’s no doubt about that. My condolences to Deku who has to deal with potentially catching the eye of that weirdo. Although I suppose on the positive side at least Ochaco still lacks a legitimate rival for Deku. He’s sure as heck not ending up with the crazy killer girl. 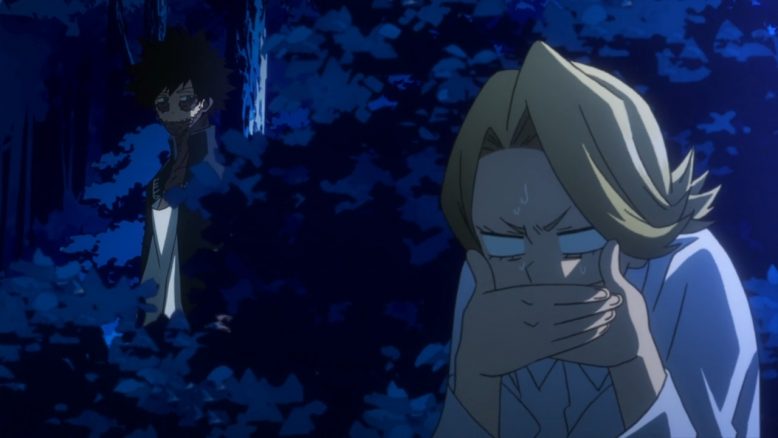 Not a bad episode at all. We got some conclusions to a few hanging fights. And we got a reminder with Momo that there is some scary stuff going on. Some people may be finding great success in this situation, but others were reminded of how seriously dangerous this career path is. I don’t like Aoyama, but I feel for the guy. Being entrusted with getting his classmates to safety and then nearly running right into some scary individuals. He’s more reliant on his costume (or rather his belt) to safely use his quirk so just jumping out there is more risky for him than most. Right now the key is getting Tokoyami and Bakugo back from the villains. This show is willing to borrow aspects from various other series of this type, but not sure we need to make Bakugo any more similar to Sasuke than he already is.