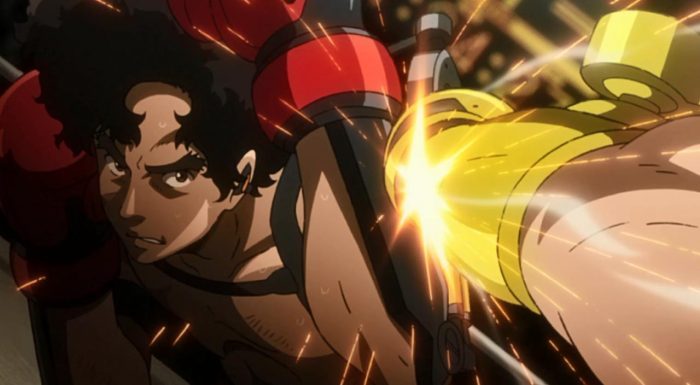 Now THAT… That is how you do a series premiere. I’ve often felt, even believed in, the considerable difficulty there is in judging an anime series based on its first episode. Fortunately, there are those rare exceptions here and there, the shows that just hook you in from the very first episode. Megalo Box, a sci-fi boxing anime series made to commemorate boxing manga/anime franchise Ashita no Joe, is an absolute delight on many levels. Its also a success on many levels, particularly those that an introduction to a new anime world and series needs to have. 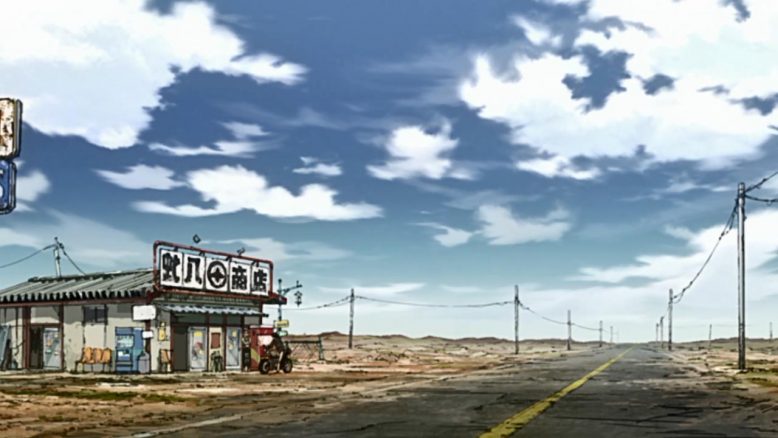 But… Before I get into any of that stuff, I suppose its worth admitting that I’ve never actually read or seen Ashita no Joe. I’m definitely a pretty huge fan of boxing anime/manga, with Hajime no Ippo being one of my all times favorites. But as far as the classic that inspires this series goes, I’m pretty much a newbie. Despite that, even with seemingly fresh eyes, I CAN see that Megalo Box is certainly something special and that its drawing from storytelling and character techniques that I haven’t seen in anime for a good while.

Make no mistake, Megalo Box feels like an anime from a different era, the coveted late 90s early 2000s era when Sci-fi world building anime, and just unique stuff seemed to litter the anime landscape. Which, I realize, is no small praise, but Megalo Box’s first episode gave me the same sort of feelings and sense of nostalgia that I got from say Dimension W a few years back. It’s aware of certain trappings and mechanics that made old anime series so captivating, and its executes on them quite beautifully. 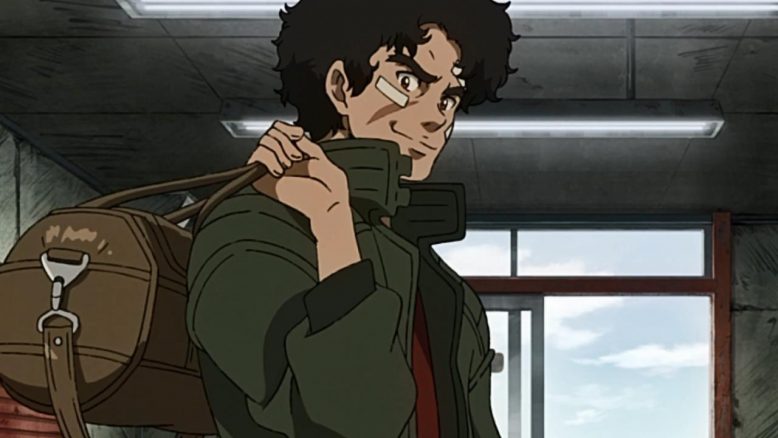 Now… Unlike Dimension W, however, this show does seem to have a pretty good handle on both its world building and its pacing. This first episode, is a masterclass in how to build up to a rather exciting moment while simultaneously giving the audience a pretty good idea of what kind of world its jumping into.

From the first episode, its becoming quite clear that Megalo Box is going to be a story about the under dog. Said dog, is literally known as “Trash Dog” (who I’ll refer to as TD for short), a young man that seems to be using scrap parts to power his “gear” to compete in underground boxing matches. Fascinatingly, its unknown whether this young man is actually talented at this new form of boxing or not, since the opening episode has him throwing fight after fight. Much to both the frustration of him and the audience, TD is unable to actually win any of the fights he enters, mostly because they’re rigged to have him lose, albeit in close, convincing ways. 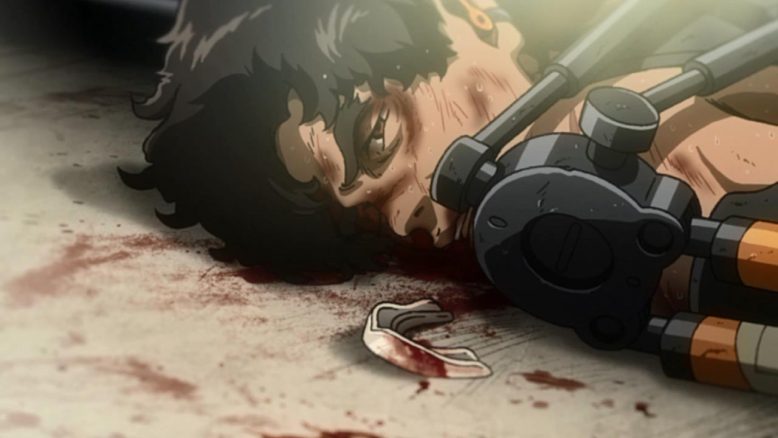 The reason this young, self confident boxer must lose? Well he’s not really a citizen in this area that he lives in, and thus can’t really make money as an official boxer. There’s a nice undercurrent here of the underprivileged yet seemingly talented youth being exploited by the older generation, people who’ve long given up on aspiring to rise up and thus are content to just lie and cheat their way to survive.

This, is also a darn unique place to start our main character at, as even he isn’t confident enough in himself to really push beyond rigging fights and losing. And its after one such loss, that TD runs into (almost literally) a rich lady. A lady who both he and the audience have seen quite a few times on TV. The person behind the biggest official boxing tournament “Megalonia” in the area. Now… While this chance meeting with said lady is actually less impactful than it may originally seem, the more important meeting happens a few minutes after. A muscular man, named Yuri ends up antagonized by and then ready to take on TD in a fight. Sadly, he’s stopped before the fight can begin proper. 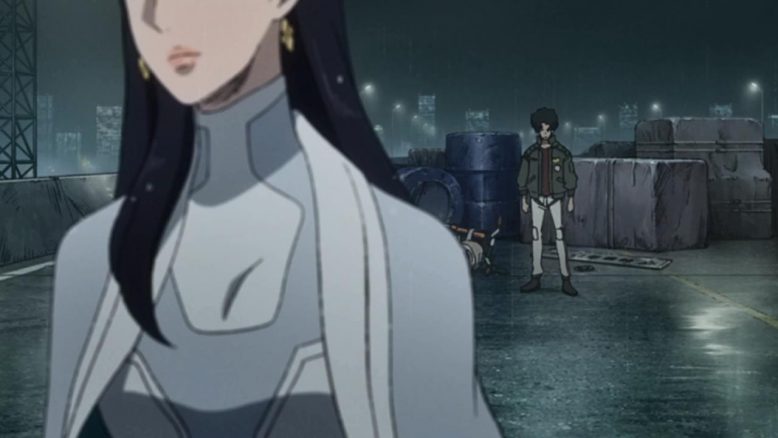 And its from here on out, that the show expertly builds up to the cliffhanger that it leaves its first episode on. There’s hints, not via dialogue or directly speaking at the audience, but in the body language and expressions that both TD and Yuri share something. Yuri, from his quick observation, has identified our youth as someone who at the very least, is worth fighting against. There’s a recognition here, a respect that only people of true talent can have for one another.

Which, is pretty darn important, because as TD finds out the very next day in his underground ring, Yuri is none other than the current Megalo Box champion, poised to challenge and fight TD in the ring, right then and there. Not only does Yuri’s insane challenge uproot the very foundation of the natural social structure of this sad society that governs that world, but nearly everyone save for TD himself want to stop the fight as quickly as possible. 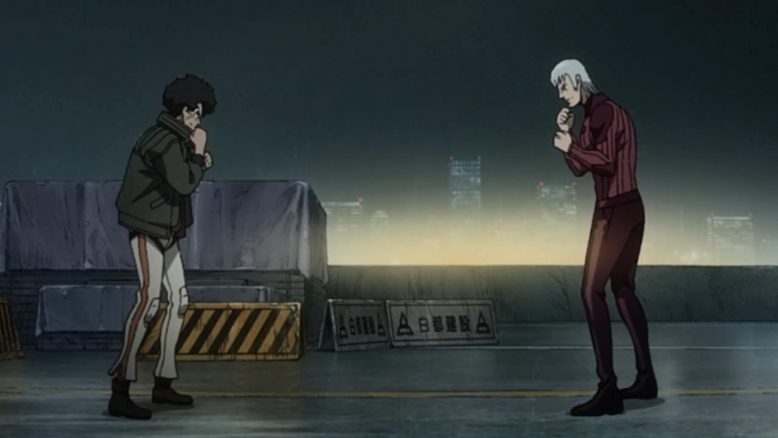 Of course, TD and Yuri could care less about social dynamics, about what’s proper and about their own standing. These are two men who have built themselves up and who seek the thrill of both the fight and a strong opponent. Is this a new rivalry in the making? Is TD actually good enough to beat Yuri, a man who’s not only known to be the officially strongest boxer, but who sports the latest technology in cybernetic gear? Heck, is TD even good enough to last a few seconds in this bout that he’s gotten himself into?

The answer to all those questions, are left unanswered as the episode closes out. With its excitement built up to eleven, the show exits, leaving the viewer begging for more. The arguably best way an episode can end. Is it frustrating that we don’t actually get to see TD and Yuri face off in the episode? Maybe, perhaps. 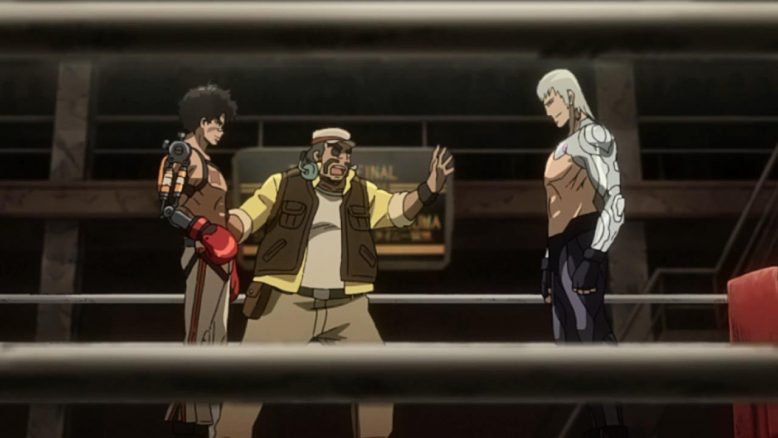 Perhaps it is, but I can’t help but respect Megalo Box for how restrained and careful the show is in its first episode. There’s a confidence here, in whatever the actual story is, and the show is content to just lay down the ground work first, and then jump into the actual meat of whatever the main story is. This idea, of taking one’s time and setting things up properly, its something that very few shows these days dare to do. Its something that you’d think is obvious, something that may even be essential to a good, well paced story, but its something that’s strangely lost in the anime viewing landscape of today.

Simply put, more so often than not, Anime series will botch their first episode, focused entirely on getting to a particularly “interesting” point in the story that will excite and entice viewers. But as I think Megalo Box proves here, a good story takes time, patience and careful work to actually becoming something truly transcendent. 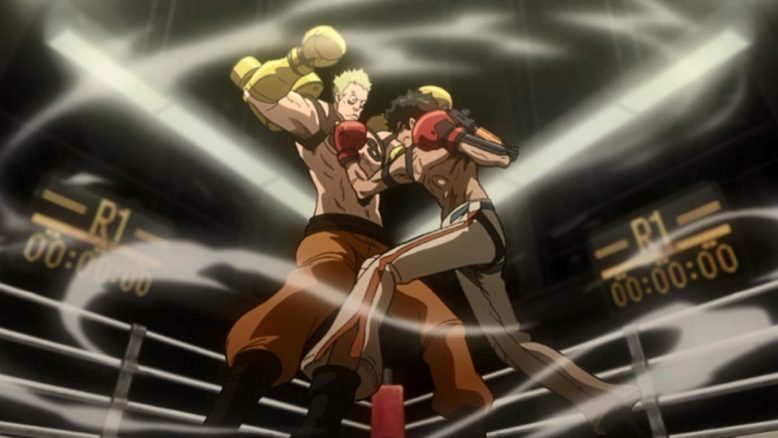 In the end, I will admit that I have no idea about whether Megalo Box is actually going to deliver on the promise it showed off this week, but darn if I’m not super excited to see what it offers next. The storytelling for the show is definitely the primary reason  for this excitement (as it often is with any anime series), the animation, the look and feel of the story, all of that is definitely something equally noteworthy that helps this show feel like something creative and different. 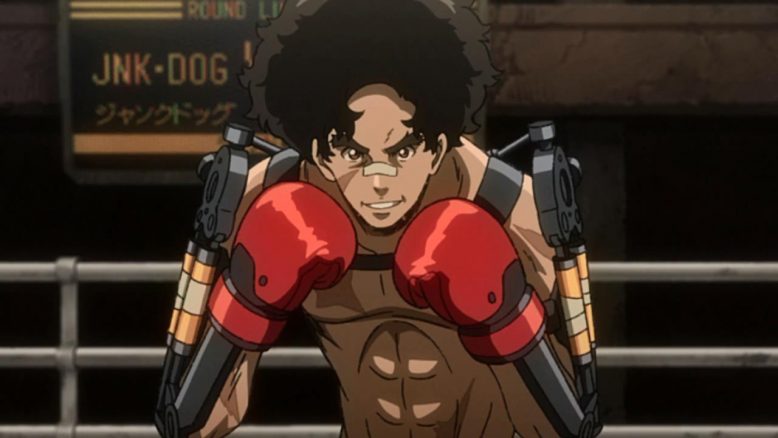 Something that comes more from the good old days where series like Samurai Champloo, Cowboy Bebop and the like were common place, than today. That, I think, is the biggest compliment I can give a show that I’ve already praised to an almost unhealthy degree, in its first episode.

Its unclear how good of story Megalo Box is really going to be, and its definitely possible that the show will fall apart in the next few episodes, but given the impressive visual style, the art direction and the masterful storytelling, its hard to believe in anything other than a truly good time coming our way. Next we’ll find out if TD and Megalo Box is all talk, or if it can walk the walk and build on this impressive start.