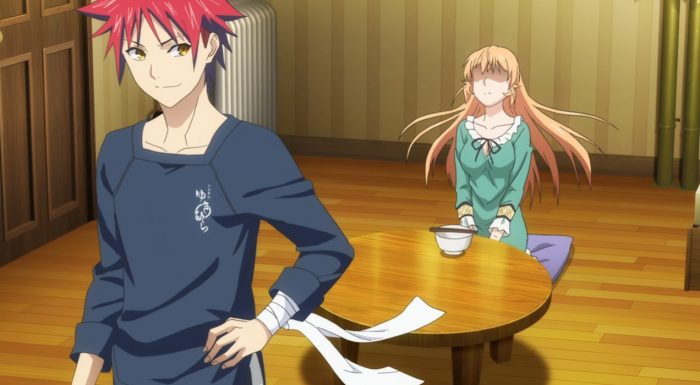 Now, finally the spring season can begin in earnest. If there is one show, one series that I’m always glad to see, its Shokugeki no Soma. After what was a slightly bumpy first half, we now see the return of Shokugeki no Soma’s third season, and with it, comes a show that definitely feels a lot more focused and well paced.

The pacing was, for sure, the most disappointing part about the first half of San no Sara (The Third Plate), at least for me. Look, I know I’ve talked for a good twelve episodes about my dismay regarding the pacing of the first cour for this season, so fret not, I don’t intend to retreat old ground today. The reason I even brought the issue up, was because as far as I could tell, episode 13, the first episode of the second cour of this season, has the pacing aspect, pretty much on lock down. 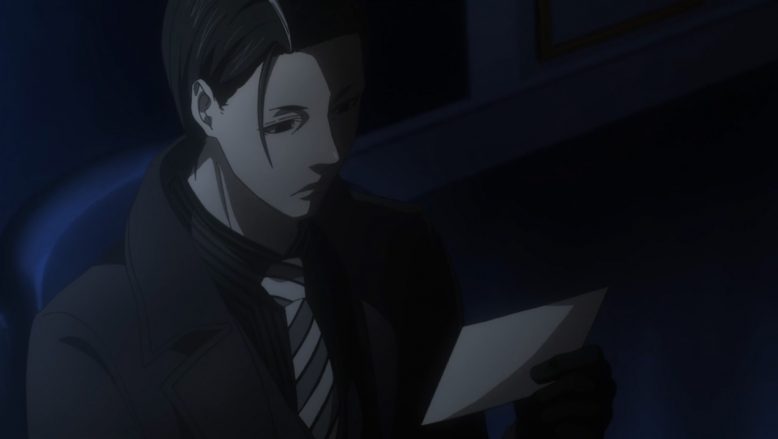 Its no secret (well… maybe it is) that this part of the story, is where the “good stuff” in the Azami arc really begins. And it was because of this fact, that I think the first cour was very much just a victim of that mad dash to get here. Now, if the OP is any indication, it seems like the show will end pretty close to where I actually stopped reading the manga. Which, is an interesting aside, because that means that I really won’t be seeing any new content in perhaps this entire season of Shokugeki no Soma.

I think it says something, then, that I’m here, a few hours after this episode aired, and talking about this show. Shokugeki no Soma is definitely my kind of show. There’s a real focus on character dynamics, there’s an energy of positivity and hope, and added to that is the clever plot work, the exciting competition aspect and of course, the gorgeous food. 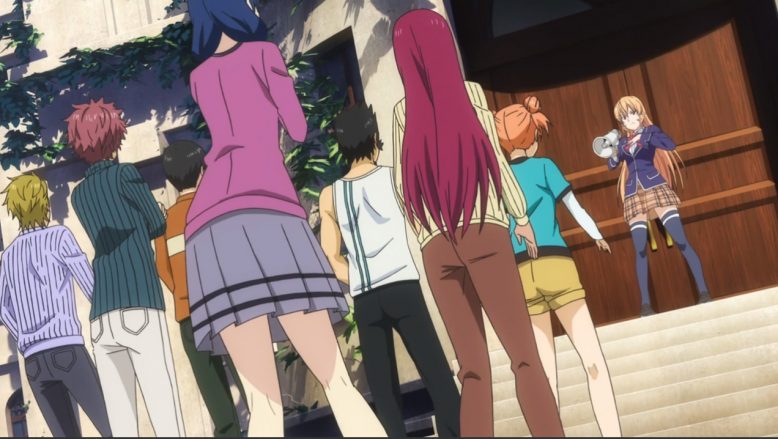 If you recall, I’ve often said that even at some of its low points, Shokugeki no Soma is a show that is a cut above the rest. And while that is certainly true, well… This week, in my humble opinion, was one of the high points for the show as whole. And I do mean the show, because what was so striking about this week’s episode is that it actually sold me on a particular idea that the manga actually didn’t, back when I originally read it.

That idea? It was Erina’s big change, which I think the show just sold so darn well. See, since the start, I’ve long been someone who has actively hated on and disliked Erina as a characte. Erina was, for sure, a girl that was spoiled, arrogant, selfish and just seemed unlikable when we first met her. 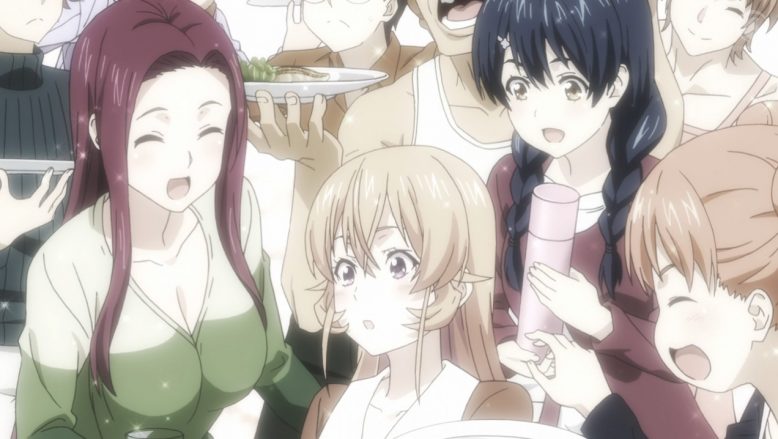 But man, have things changed. Erina’s big change, where she decides to actually rally and motivate all the Polar Star Dorm kids, was something that I had, until this week, found rather odd. Yes, Erina has been hanging out with the kids for a while, and I’m sure that’s done good for her. Heck, her interactions with Soma are sure to have helped too. But what we’ve seen again and again is that Erina was the one character that Soma hadn’t turned around… Until now.

The smart play here, by the show, was to basically dedicate most of this episode to the Erina and Soma conversation. That duration of time, well, it was well spent, and it was prioritized in a way that I believe served the story best. This change in Erina is something that really needs to be properly shown off and made believable, and not just because of what we see this week, but for what will follow. 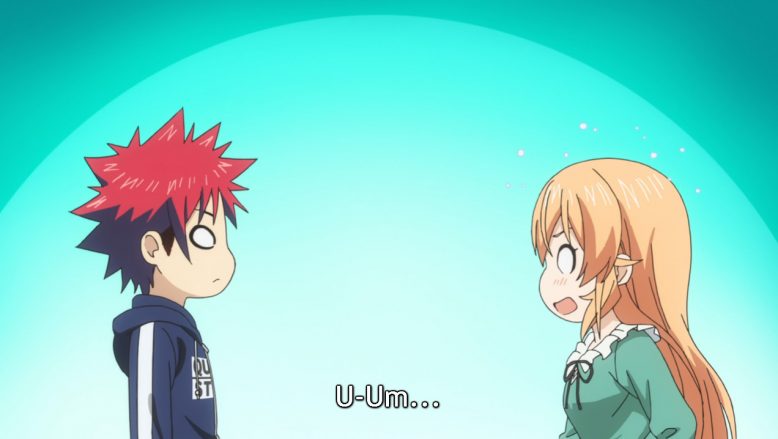 Suffice to say, the show nailed this whole thing. What I loved about the whole conversation between Soma and Erina, was how natural it felt. Its rather rare for kids to actually be able to communicate effectively, let alone influence one another. One of the things that I think makes the entire cast of Shokugeki no Soma so likable, however, is that strengths or weaknesses be damned, they try and do the best they can. Erina, in her awkward way, going to Soma, a guy that she’s not too keen on, and asking him to give her advice was pretty darn impressive.

Granted, the knowledge of Soma being Saiba Joichirou’s kid was probably helpful, but it still takes a certain type of person to bury their pride and go ask for help. And Erina? Well she’s been a huge ball of pride until now. So Erina asking Soma was certainly impressive, but what was even better, was Soma’s response to her big problem. Soma isn’t the most clever or smart guy when it comes to communicating with others, and yet there’s a lot of wisdom in this likable kid. 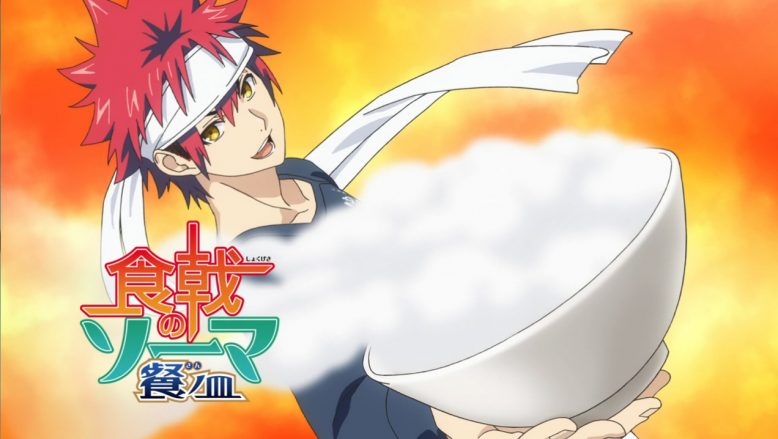 He’ll offhandedly say really deep things, without even really ever intending to sound smart. More so than any wise words, however, the quality that Soma has is that he gives people “importance”. Every person he cooks for, well there’s a piece of his own soul that goes into making the right dish, for the right person. As I think Megumi (bless her) said quite aptly, Soma was making the Tempura Bowl he made, for a particular reason. It was definitely something that he felt Erina needed.

And, in classic Soma style, the dish featured another creative and out of the box collection of ideas and techniques. This the 51st episode of this show, and I just have to commend the research, the dedication and the skill that’s gone into every one of these dishes that we’ve seen in this show. I mean, just LOOK at how darn amazing Soma’s Frozen Egg Tempura Bowl looks! 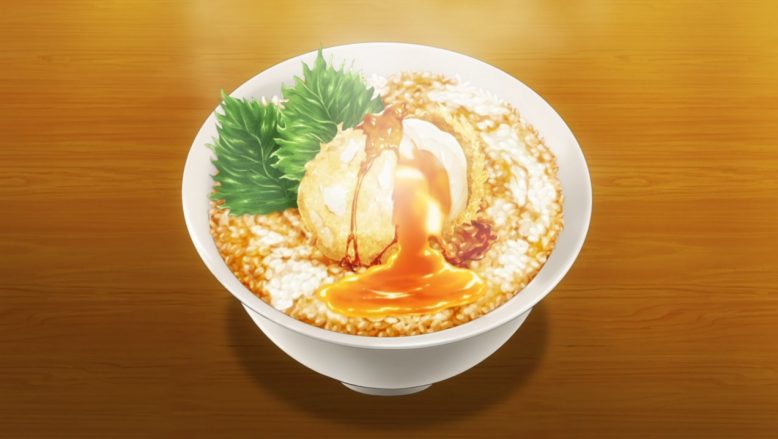 I’ve never had that particular brand of Tempura Bowl (Personally I’ve only had Chicken or Shrimp), but man do I so want to try what Soma made this week. And the thought that went into the actual dish, I mean, there’s a lot of depth here. I know that writer and mangaka Yuto Tsukuda has a collaborator in Yuki Morisaki (a professional chef) and man does that decision continue to pay dividends in this series. How else would you have the knowledge, the background to talk about things like “the gelatization of the egg yolk” and the flavor getting stronger because of freezing it.

Not only that, but using a cheaper brand egg as to not have the flavor overwhelm the dish, that whole idea is just… Wow. Its smart, its believable and I don’t doubt that its authentic. Also, worth noting is that the recipe itself, which just screams Japanese style cooking (which, obviously, Tempura anything is Japanese). Japanese cooking has this philosophy, this respect for the ingredients that seems to be the foundation of their country’s cooking. And I loved how both Erina and Soma took to that “love of the ingredient” from very different angles. 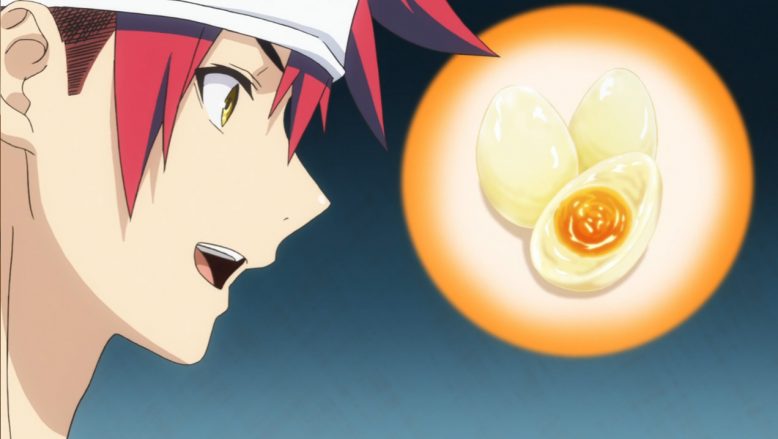 While Erina, due to her dad Azami, believes that the highest quality, expensive ingredients are the best, Soma brings forth a different idea. Any ingredient, of any grade, used creatively and properly, can create something truly transcendent and amazing. And personally? I’d rather eat a very nice, comfort food style Tempura Bowl like the one Soma showed off, then go to a super high class expensive restaurant. I’m sure many foodies would gap in horror at that statement, but I think Shokugeki no Soma, more than anything else, shows off the appeal of normal but novel comfort food.

It is worth noting, however, that even Japan’s convenience store food is leagues and levels above the kind of food we get in the west. If you’ve ever been to Japan or had Japanese food even in the US, the one thing that will almost always catch you by surprise is the quality. Even the cheap stuff, is so darn well made and of a pretty darn impressive quality. That’s something unique to Japanese culture and Japanese cooking. And that whole idea is separate from what the show itself wanted to highlight; the actual joy of discovery in cooking, something that Soma and Jouichiro both ascribe to as their core tenant in cooking itself. 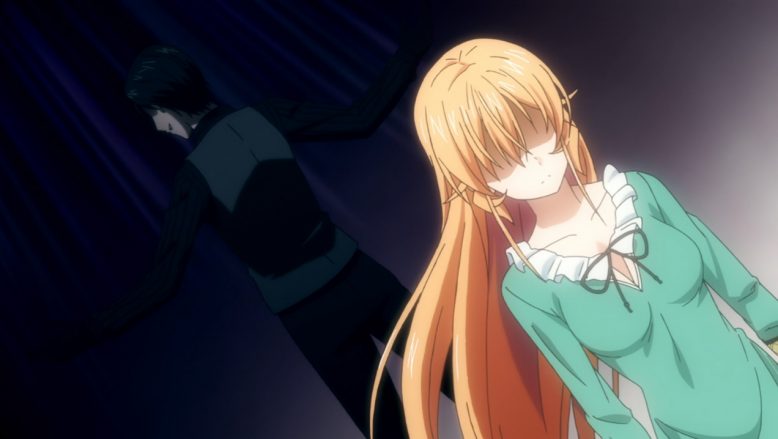 Its that idea of “not knowing the end result” that Soma uses to guide Erina to an answer. The answer? Well, that food and cooking should have a sense of “freedom” to it. Freedom, something that’s in direct opposition to Azami’s closed off world. And the scene, the moment, that sold me on Erina’s transformation, was how she, in her mind, negated everything that Azami had fed her until this point.

It was a powerful moment, a moment where Erina rose up, broke through the chains of her pain and abuse and decided to oppose her father. That…. Well… That is something that I think one can appreciate, even if they originally weren’t a fan of Erina as a character. And that really is the big achievement of this Azami arc in my opinion, the rehabilitation and redemption of a character that I personally never expected to like. 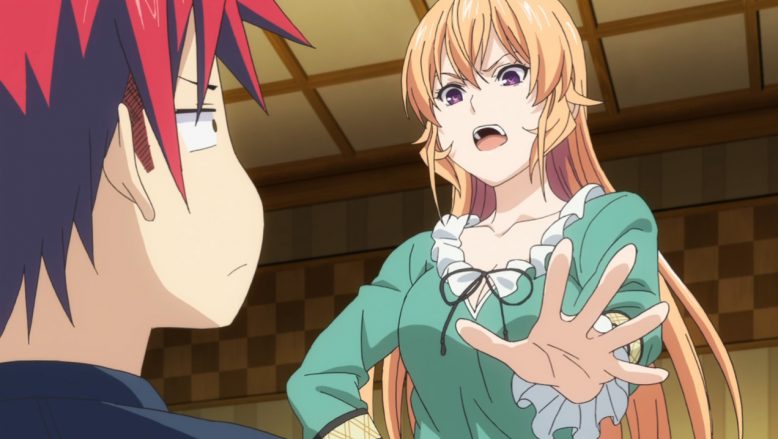 I do like Erina now though, and I believe that she has changed, for very good reasons. And thus, with her answer found, Erina goes forward and rallies the Polar Star Dorm kids, beckoning them to stand up and face Central and the upcoming exams. As to how Erina is going to support the Polar star Dorm kids? Well, that’s really what the next few episodes are going to be about. aren’t they?

In closing, I’ll saw that I did notice some animation quality drops here and there. Not the artwork, or depiction mind you, just some of the animation particularly when the chibi art style came into play, was a bit less impressive then I’m used to. I’m sure it was just a minor hiccup, because the OP and ED themes and animations were darn impressive. I like them, and I have to hand it to Shokugeki no Soma for being able to create some memorable and likable Intros and Outros, throughout its run. 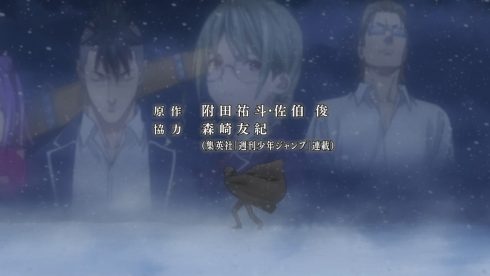 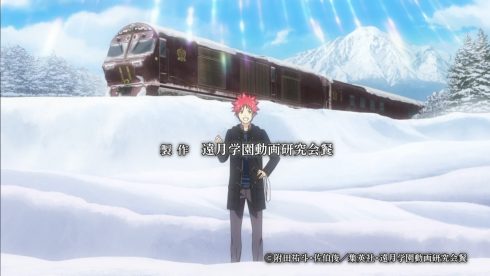 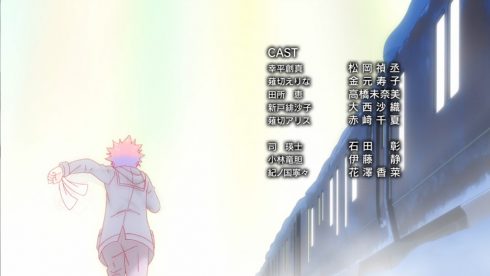 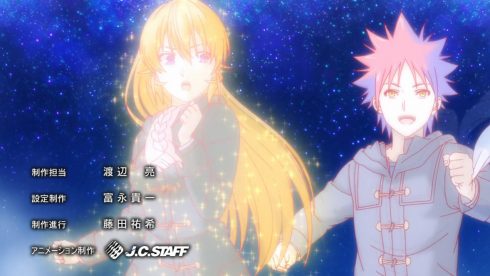 All in all, Shokugeki no Soma is back, and I can actually, happily say, its better now than it has in a long while. Here’s to another 11 weeks of more of this stuff!