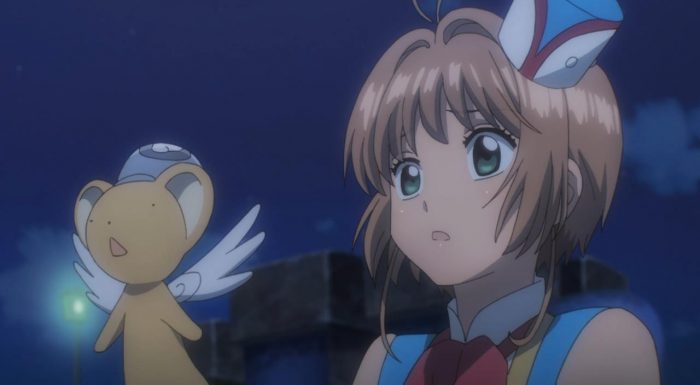 Its an odd sensation, seeing Clear Card-hen clearly try very hard to be charming, funny and engaging, but fail oh so miserably on almost every level. It was especially bad this week, but worse still was the fact that the show brought back nearly everything that I think is either not working, or actively ruining the overall experience. 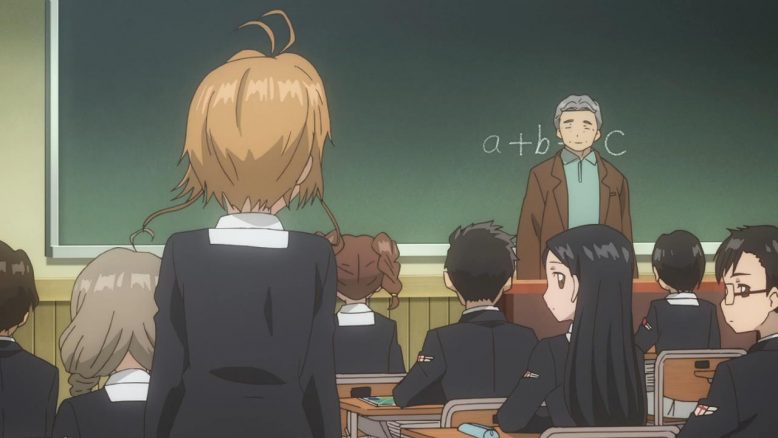 There are many issues with Clear Card-hen at this point, but I think the thing that really saddens me, is the depiction of Sakura’s normal middle school life. The slice of life moments from the show have gone from being mildly weird to downright annoying. Every interaction Sakura has with another character just feels fake and artificial. I mean, something as basic as character interaction being so far off… Well, it makes me really wonder about the writing chops of the people involved.

Is the responsibility for all of that, on Clamp? I mean… Lets be honest, Clamp hasn’t been able to create something mainstream and popular in quite some time. As someone in the comments pointed out quite aptly, Clear Card-hen is starting to show signs of one of the worst Clamp projects ever, Blood C (a show that I dropped a mere three episodes in). And sure, you could definitely point out that the overall mystery and story is based on Clamp’s story, but then there are anime specific choices that are just as suspect as the overall story. 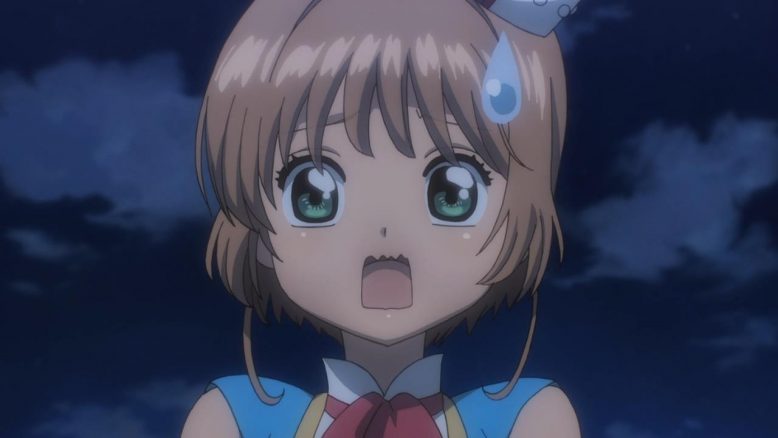 Sakura’s weird “Uwweee!” noises, for instance, are something that just really don’t fit in 2018. They really do read as a sad attempt to make Sakura seem more cute than she is or probably even should be. Normal girls don’t go around making noises like that at every friggin chance they get. Heck, even if you’re trying to make Sakura into a somewhat removed from reality, cute character, this particular approach just doesn’t work. It just makes Sakura sound like a bafoon, and coupled with her overly cute speech with “-mon”s at the end of her sentences, well… It just doesn’t sound like a cheery normal middle school girl anymore.

Look, I’m not entirely sure how I survived the combined cringe worthy voices of Sakura and Tomoyo all those years ago. Maybe I was just young, or maybe it was because I didn’t really understand Japanese at the time. Whatever the reason, the voices for both of these characters grate on me a lot more now. They don’t just annoy me, they actively push me out of the experience, and the whiplash from having to readjust myself every time these two speak, is just… Tragic. 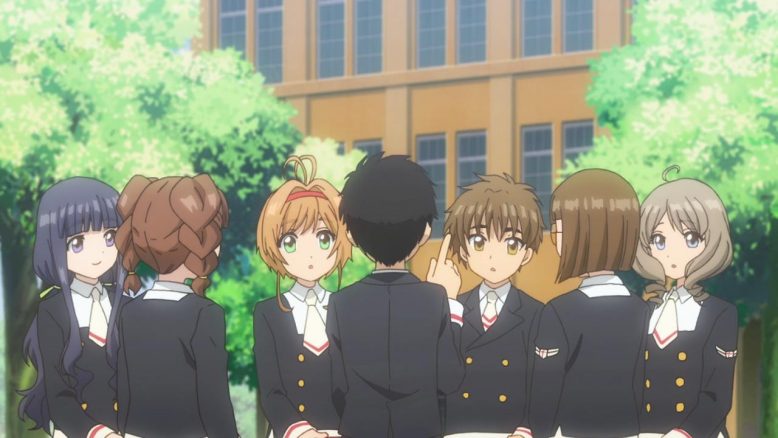 Yes, I realize that it may seem like I’m making a big deal out of nothing, but this week had one particular scene that, just brought it all home for me. See, in this week’s episode we have another one of those “Sakura and her friends” have lunch together scenes. We’ve seen these quite a few times already, but the noteworthy thing this time is that nearly every character gets to utter a line or two, thus giving the audience ample opportunity to compare the voice acting and performances for each character.

And the results? Well, there’s a HUGE difference between Sakura, Tomoyo, that glasses girl (the aspiring playwright) and the rest of the cast. Syoran, Akiho, the girl with the pigtails and heck even Yamazaki sound utterly angelic compared to those three. There’s a clear sense of these four kids actually talking like normal human beings, while Sakura and Tomoyo very much sound like two older women trying to sound cuter by raising their pitch as much as possible. It just… Hurts, and its especially frustrating because these are two of the primary core characters of the cast. They need to sound better than they do. 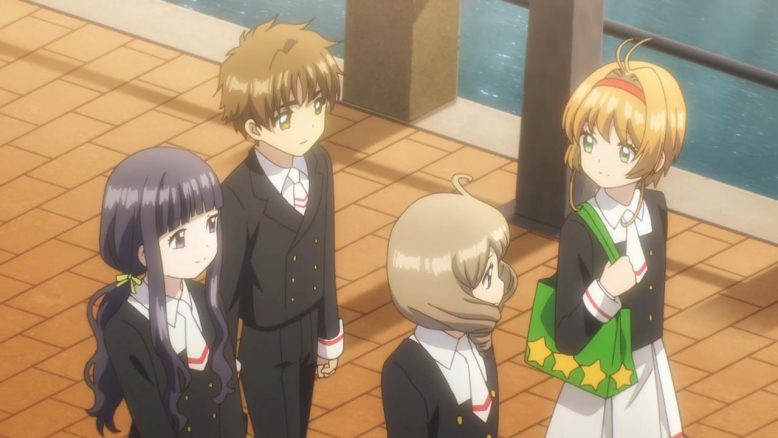 Now… Perhaps I’m the only one who takes issue with these performances, but man does it hurt bad, when it does. I think last week’s episode worked better because the show actually gave us a bit of a break from the larger cast, keeping things a lot more intimate. Last week’s episode felt a lot more like a one-shot chapter, rather than a more connected part of the overall story for this series. And I think its those more self contained episodes, that seem to serve Clear Card-hen well.

I mean, we get another dose of Syoaran and Eriol not only talking about things behind Sakura’s back, but actively identifying the origins of the robbed figure that Sakura keeps seeing in her dreams. So at this point, we as the audience know that Syoaran and Eriol have a pretty good idea of who the mastermind is behind all of this, AND they’ve even linked Akiho and her butler to an ancient magicians cult from England. Why are they not sharing this information with Sakura? What is the point of all this cloak and dagger stuff again? 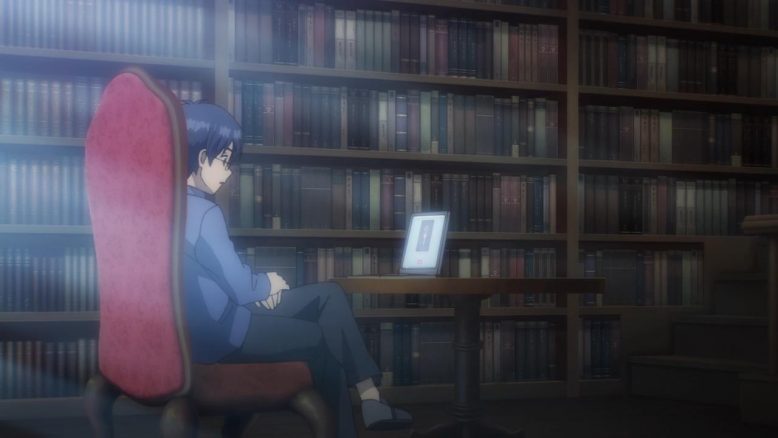 Oh right… We don’t know. We don’t know, and the show is still refusing to budge on this issue. Its long past time for it to actually give us either a reason for this odd behavior, or just have Syaoran and Eriol act like normal humans and tell Sakura what’s going on. But I assume we haven’t seen any major progress on this front because “its just not time yet”. according to whomever originally wrote the story.

Between this vexing behavior from Eriol and Syoaran and the whole Sakura voice thing, this week had me caring a lot less than usual about the whole Capturing cards bit of the show. So believe me when I say that my expectations couldn’t have been lower when we did get to that point of the episode. Thankfully, there wasn’t too much to dislike here beyond just a seemingly unmemorable capture. Sakura runs into a card that’s similar to something we saw in the last series, in that it makes things go upside down, and then with Kero’s help, is able to use her current cards to fly and capture it. 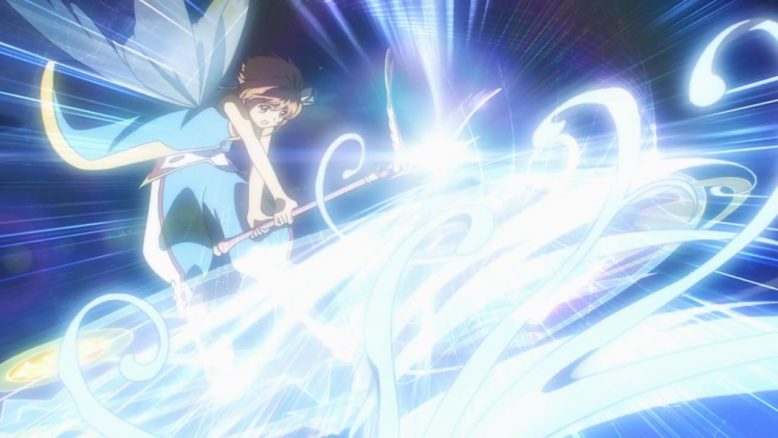 It was only after the capture itself, that I think this episode did something new and interesting that we haven’t seen before. Following the capture, the damage that the card left in its wake was something that Sakura couldn’t just sweep under the rug as she has oh so conveniently thus far. Instead, the resulting large amount of upside objects in the park where the capture takes place, draws a huge crowd, forcing Sakura and Kero to make a quick exit.

Not only that, later on in the episode we also find out that Sakura was in danger of winding up on the news, with a newscaster reporting that the authorities aware of the whole “upside” down vandalism happening within the span of 20 minutes. Of course, the fact that an entire park worth of equipment was turned upside down in the span of twenty minutes should probably receive a lot more attention and worry than it does from our protagonist, but I suppose you can’t wish for the moon her. 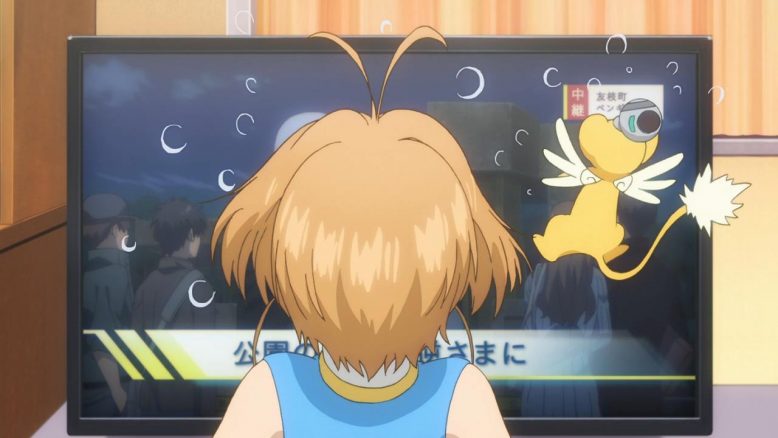 Personally, I think it would be very interesting to see the more “secretive” side of Sakura’s card capturing explored. How does she keep herself safe from attention when all these random cards appear and throw everything into such disarray. And why do the card captors need to be kept secret like Tomoyo points out? These are questions that I don’t believe we’ll ever get answers to, but they’re certainly interesting questions none the less.

Which I guess brings us to the big question on Clear Card-hen as a whole. We’re 11 episodes in, and I think we’ve got a show that oscillates between “decent” to “awful” depending on where its at. Some of my issues with the series probably stem from my own nostalgia, and from remembering CCS as being better than it probably ever even was. But, at the same time, some of the issues found in this show are certainly its own, and while I’m not even close to the point of disinterest yet, I am getting pretty darn impatient. We need some movement on the larger story, and we need it as soon as possible.