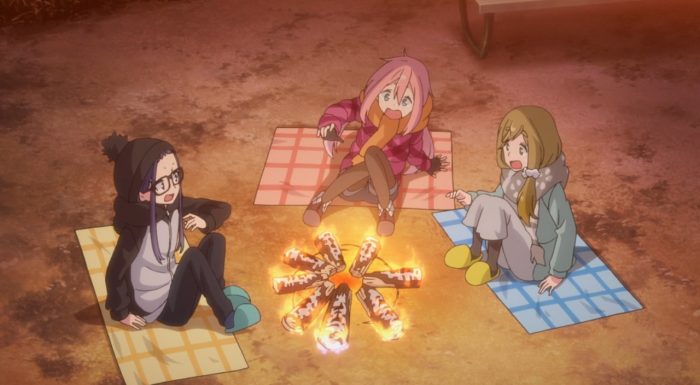 I have to admit, at first it sure seems like the Outdoor Club got the better end of the deal in episode five, compared to Rin. With shops, heated resting areas, an onsen, a well-maintained and populated campsite, and pretty much whatever else you could ask for, the Fuefuki Park site the  Outdoor Club went to seems to win hands down in terms of comfort. In comparison, poor Rin rode over 150 on a scooter in near-freezing temperatures to reach a campsite that seemed completely uninhabited, even by any staff. The onsen she’d eager to stop and warm herself up at turned out to be closed for the season, and the scenic vista point she first reached was obscured by low-hanging clouds. 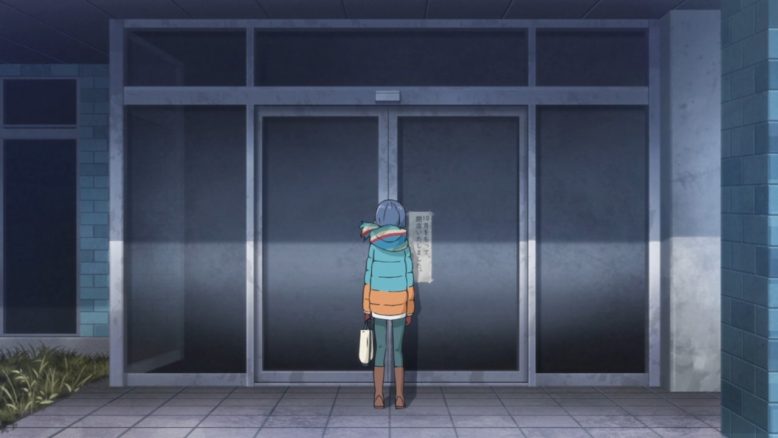 One could hardly blame Rin for feeling down after all this. Fortunately, sometimes a change in perspective is all you need to raise your spirits. In this case a literal change in perspective: a short hike to the summit bring Rin out of the obscuring clouds and reveals a view that is well worth the trip. The Takabocchi Plateau actually offers a 360 degree view of all the surrounding scenery (of which there is quite a bit), and the view Rin has from the summit is unofficially labeled  “Japan’s number 1 shutter point” by photographers. With the cities of Okaya and Suwa flanking Lake Suwa, and Mt. Fuji rising up in the background, it really is a sight to see. Seeing it is enough to raise Rin’s spirits again, and remind her of what she’s come for: a quiet, peaceful camping experience where she can see lovely scenery, eat warm food, and relax and read by herself. Whatever hardships there may be in that process, they are worth enduring for the pleasure of the camping experience. 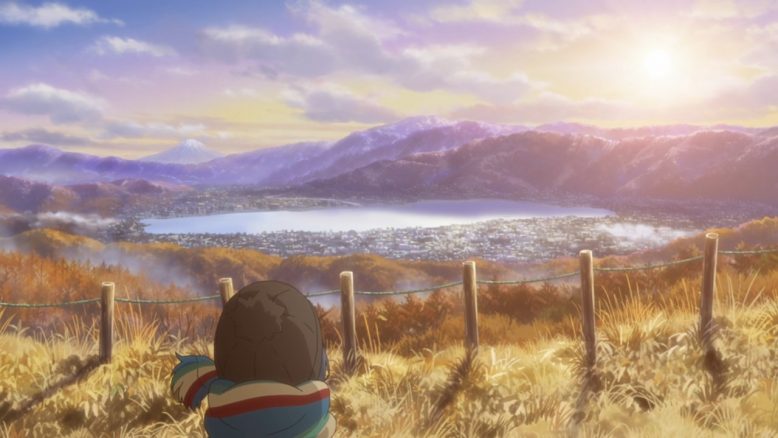 Likewise, the Outdoors Club would not be suited for Rin’s sort of camping. They prefer a pleasant, communal experience, where all the necessities are provided and comforts are available if desired. They like to have a stress-free time socializing and relaxing with each other. By that token they are well suited to the campsite they chose, just as Rin is well suited to hers. All of them are, in the end, able to get what they enjoy out of their camping experience. 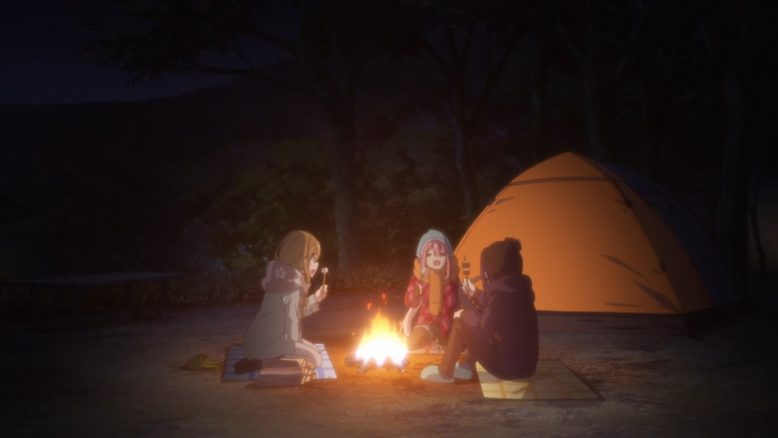 One thing both campsites share, however, is a stunning view. It is really touching to see Nadeshiko and Rin both go out into the cold at night to share what they are both seeing with each other. Despite being so far apart, for a moment it seems as if they’re standing right next to each other, looking down across the same scenery together. 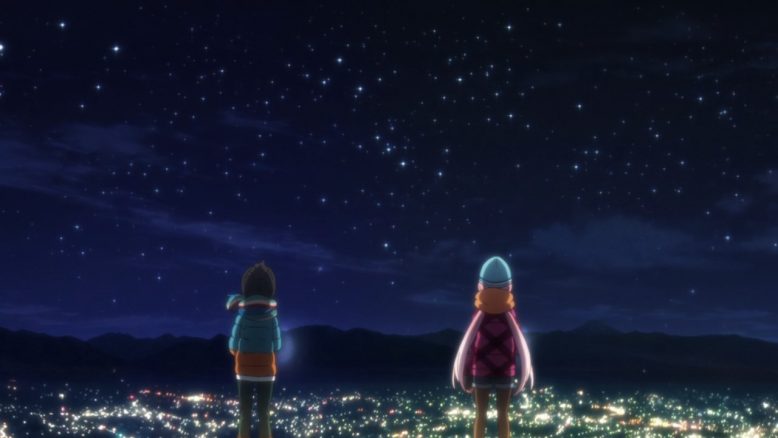 With episode six everyone’s back to school, reminiscing about their most recent trips. I admit, when it comes to things like giving souvenirs to people, or really when I have just about anything that I’m supposed to give to someone, I tend towards Rin’s approach of “well, I’ll probably run across them sometime, so I’ll give it to them then,” rather than actively seeking the person out. I’m not sure why that is… I guess it just feels more comfortable to give people something as an “oh, by the way…” rather than as a “hey, I’ve been looking for you specifically to give you this…” 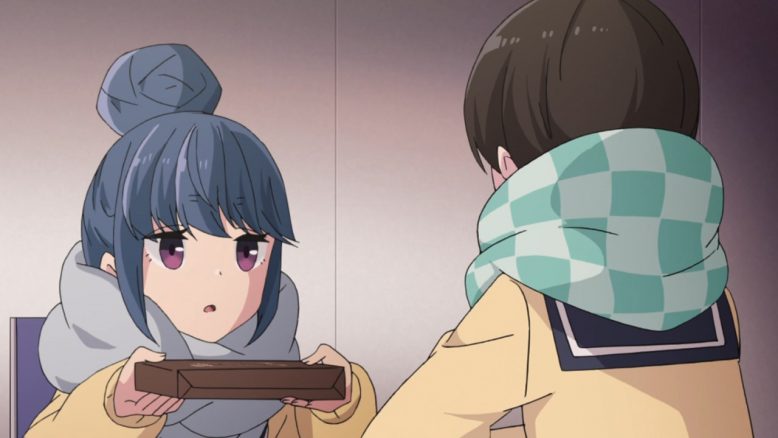 Moving on, I have to say that Rin’s new grill looks cool. I have absolutely no use for such a thing, and I still kind of want one. However, that segment where she and Saitou were imagining cooking meat on it… my mouth waters every time I go watch that part. This may be a late warning, but I would suggest viewers not watch this show on an empty stomach. 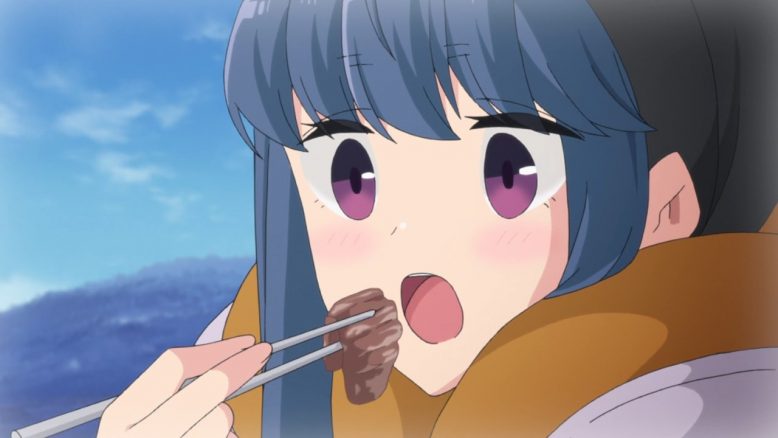 Anyway, with the mini grill on hand and Nadeshiko showing up, of course they decide to go camping together to test it out. When you get a new toy you want to play with it, right? And a camp grill is meant to be used while camping. While Nadeshiko’s enthusiasm can still take Rin aback a bit, it’s clear Rin is growing fonder of our little pink bundle of excitement. Nadeshiko’s sister again is kind enough to give the two of them a ride to Lake Shibire, where they plan to have their camp/grilling experience. 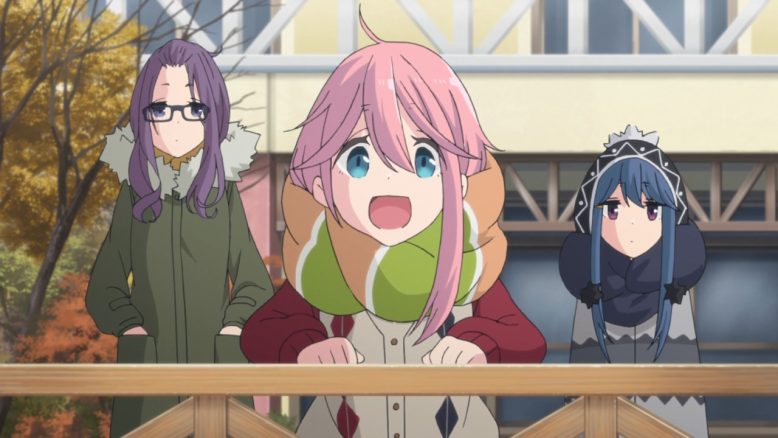 In the meantime we run across Aoi working at her part-time job at a supermarket the two of them stop at, and Chiaki is out scouting for a new campground for the Outdoor Club to visit for their next trip. Even that keeps up the meat-based theme of the episode, as Chiaki runs across a cool old guy out camping cooking steak on a skillet, an encounter which has her concluding that she should by a skillet herself. 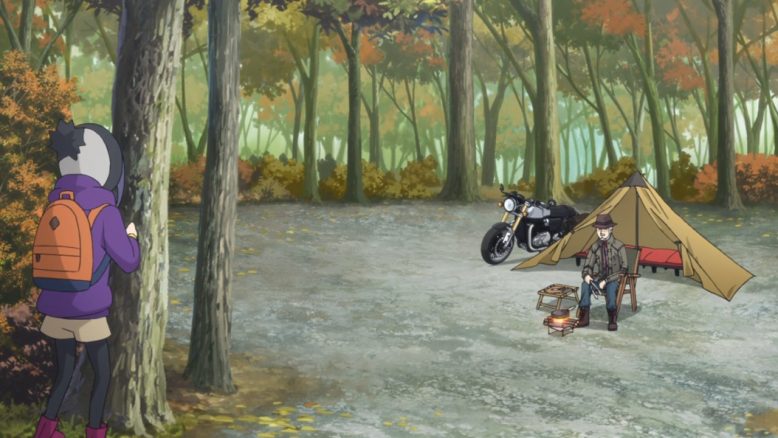 As always, Yuru camp remains just as lovely, warm, and comfy as it has always been. I will say that I hope Saitou joins the group officially soon, rather than just being content to talk about things with Rin in the library, or through texts. Just as much as there is value in the small group camping and the solo camping that the girls are doing so far, there is also value to be had in the larger group camping with them all going together. I’d like to seem them all go out and have fun together soon. 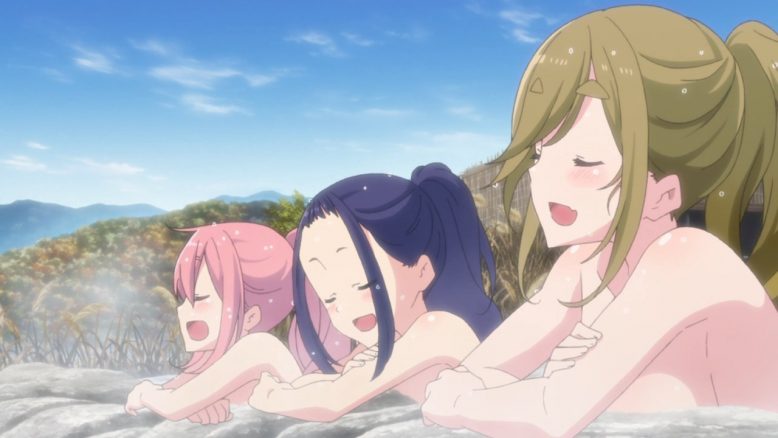 Oh, and I guess there was a bit of fanservice in the onsen scene. Don’t get too used to it: this doesn’t seem like the sort of series that makes much use of that sort of thing.