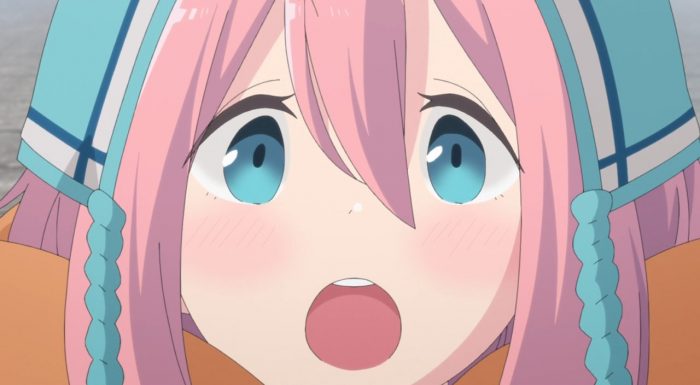 After episode 3, I think that Nadeshiko’s sister deserves some major credit. How many people would be willing to just set aside their plans for the day to drive their little sister over to a campground, pay the camping fee, and sleep in the car overnight just so their sis could have the experience of “really” camping in the winter with her friend? That’s pretty awesome, all things considered. I doubt I’d be willing to put up with that much trouble. 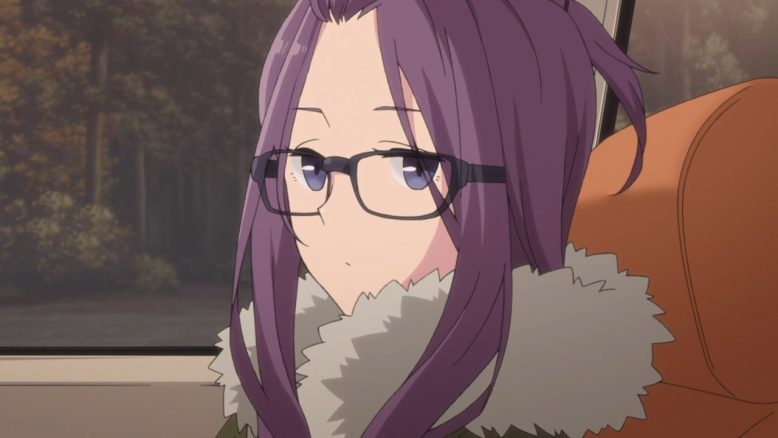 Episode 3 on a whole maintains the feeling of comfy coziness I mentioned previously about the series. There isn’t actually a lot that happens in the episode: Nadeshiko and Rin have dinner together, chat a bit, and sit around in camp enjoying the view. But it doesn’t feel empty. The humor in hearing the narration of the little camping/survival tips, the feeling of getting warm on a cold day, the pleasure of eating a warm meal in winter and warming your body up from the inside… all of these and more come across really well. Simple feelings that can connect to viewers on a basic level. 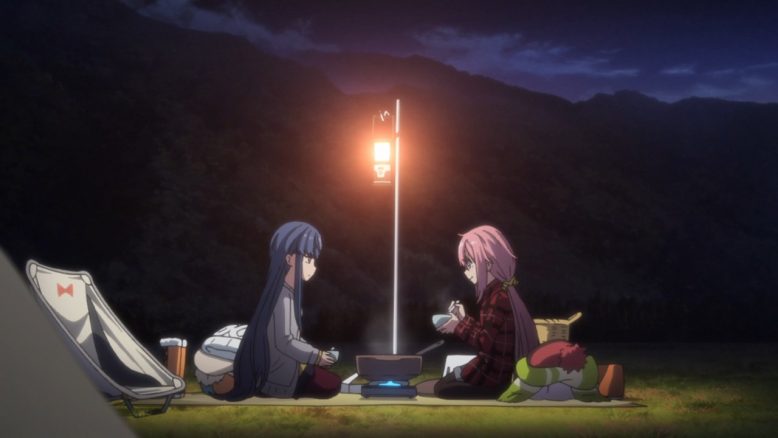 The short segment with Chiaki and Aoi looking into getting jobs is worth noting for the fact that, apparently, they have been paying for the club’s camping gear out of their own pockets. It seems like the Outdoor Activities Club doesn’t have a budget from the school. At a guess that’s due to the club not having enough members to be officially recognized. But that does leave them in a bit of a tight spot at times, because as they’ve noted before camping equipment can be expensive. You can get cheap camping gear, but it will be cheap in every sense of the word: it’s not going to be all that effective or sturdy. If you actually want somewhat decent equipment then you’re going to have to pay for it, which for these girls means earning the money themselves. At least they’re willing to step up to the task. 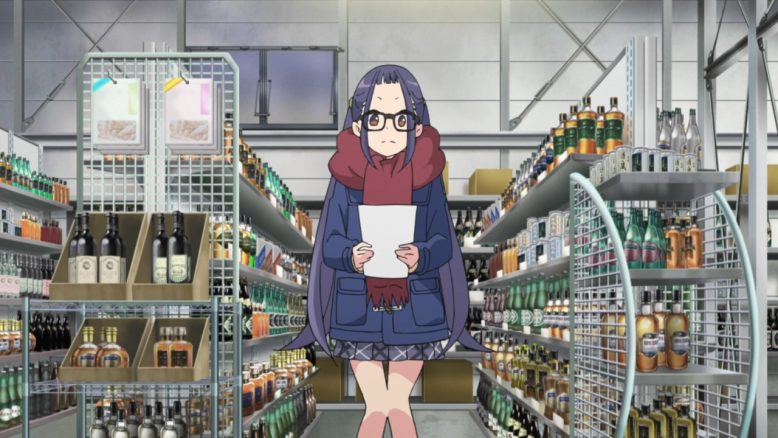 After watching both episodes three and four, something came to my attention that I believe will serve as a semi-important theme for the entire series. It’s the comparison between Rin’s quiet, contemplative solo camping, and the Outdoor Activity Club’s energetic group approach. In some ways this is as much a study of what this series doesn’t do as it is of what it does. In many series an introverted person like Rin would be portrayed as being inherently “wrong” and/or lonely. Every activity they perform alone would be shown to not be fun (or not be as much fun) because they aren’t doing it with other people. And their character arc within the show would involve them realizing how much happier they are when they spend time with everyone else, and how much “better” everything is when they do it in a group rather than alone, and they’d never want to go back to doing things solo ever again. 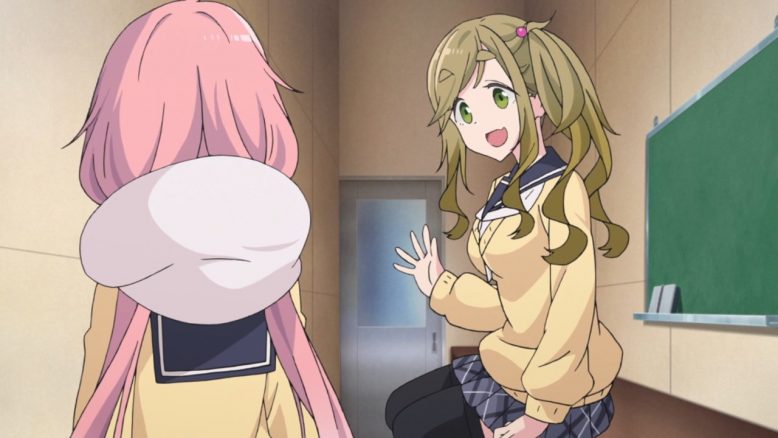 That is not the message here. While Rin is learning to enjoy camping with other people, she still enjoys camping by herself as well, and that is treated as a perfectly acceptable thing. Solo camping is a very different kind of experience from camping with a group, and you do it because you want to get something different out of it. Neither one is the “right” way to camp, as if there is such a thing. I’m glad that both the show as a whole, and the characters in particular, are willing to respect that. 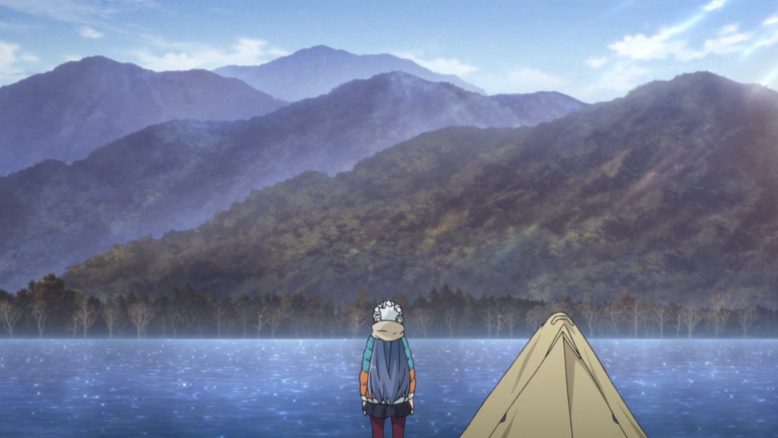 Leaving the series themes behind, we finally get to actually see the Outdoor Activities Club go camping together. Or at least head out to go camping together. Chiaki’s attempt to look cool by offering to carry Nadeshiko’s pack if she gets tired may go across well with her clubmates, but she clearly forgot precisely who she was talking to. Nadeshiko is a wellspring of energy when she’s excited about something. Seeing her rush around with that huge smile on her face makes me both want to hug her because of how adorable she is, and laugh because of the comparison to poor Chiaki and Aoi. It does seem like all three of these girls are rather a bit less used to the rigors of cold weather travel than Rin is, as before they even make it to their campground they make stops at both a cafe and an bathhouse, and seem to be having trouble motivating themselves to move on back out into the cold. On the other hand, given the distance I can respect not wanting to go on by and then walk back after getting to their campsite… 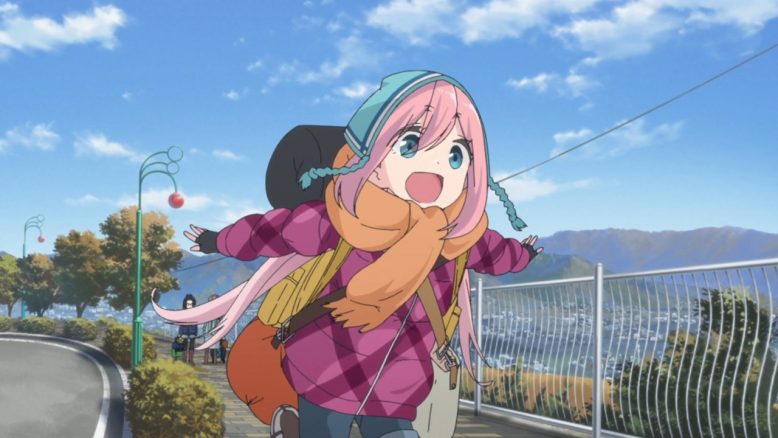 Anyway, episode four ends with both groups only partway into the journey to get to their respective campsites, so I expect episode five to pick up where we left off and show us the rest. This series remains the comfiest thing airing this season, and each episode is a delight. 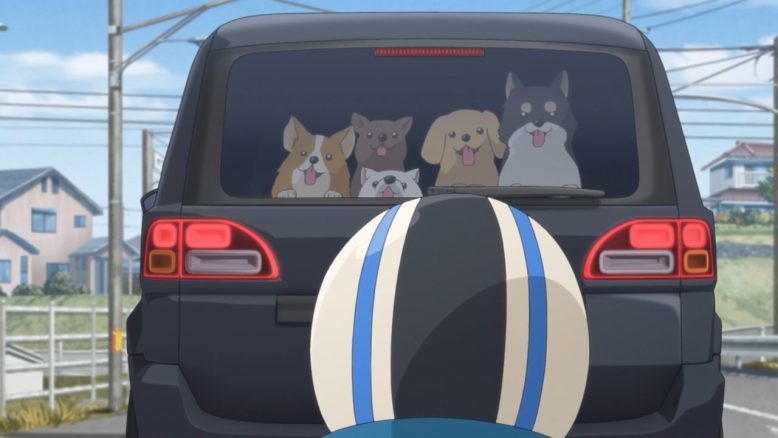 Apparently dogs love Rin. But who on Earth has five dogs just running around loose in their car at once?