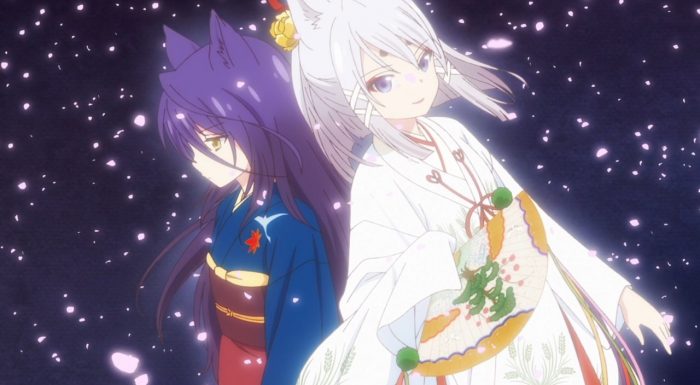 This double-episode post is brought to you by the fact that I honestly could not think of a way to write a full post for episode 9. It’s a cute and silly episode… and that’s really just about all there is to say about it. Fortunately episode 10 comes along with all Satsuki all the time, giving us a couple of new perspectives on our most diligent of attendants. 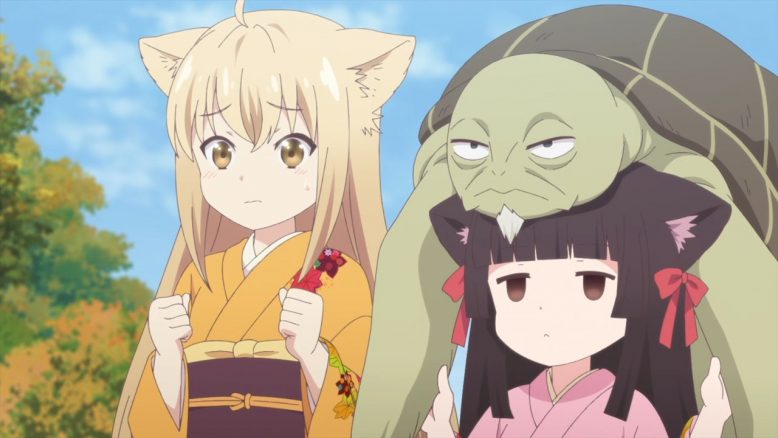 So, in episode 9 we see that Yuzu and Sakura have been down to the inexplicable beach again (seriously, where is this thing located?) and this time have rescued a giant sea turtle from being bullied at the hands of local children… accidentally injuring him in the process. His attempt to reward them for saving him by bringing them to Ryugu-Jo through the inn’s pond is amusing, but in the end not really noteworthy. The only part of this encounter that really seems special is Yuzu’s dialogue about how she wouldn’t want to go somewhere where she wouldn’t have to work, because she isn’t done learning from all the different people who come to Konohanatei. Satsuki’s sigh of relief and mild blush to hear that is also pretty touching on its own, considering how strongly seemed to object to Yuzu back in the beginning. 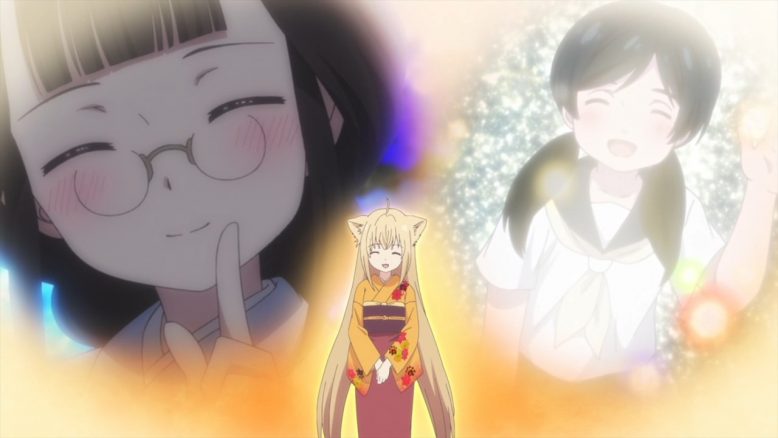 The second guest of the episode probably should be more interesting. It’s not every day you have a semi-major god drop by, after all. But while there’s a little bit in here about Ren’s aspirations towards being considered capable enough to serve the gods, and a little bit about the rebirth of a god and how her memories reach back towards the beginning of Japan, this segment is pretty much just antics with girls chasing bubbles around the inn. Also there may be a lesson here about how it’s a bad idea to try to cover up your mistakes. Refusing to get help when you don’t know how to solve a problem isn’t going to make you look more dependable. 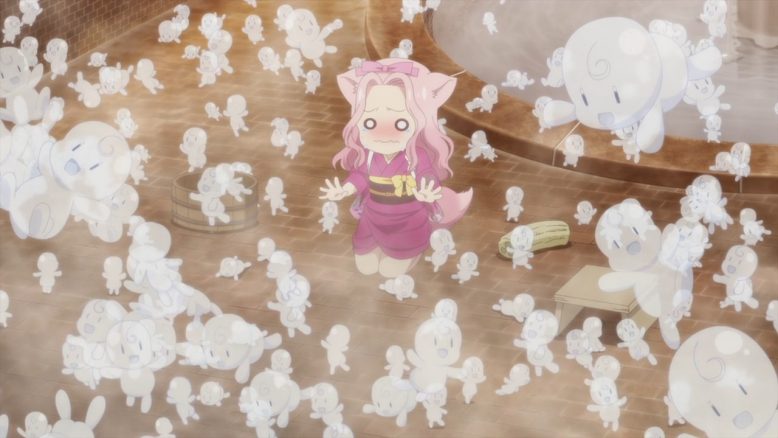 Anyway. Episode 10 gives us some stories about Satsuki which are much more interesting. First off is the less serious one where she gets to spend a day gaining a different perspective on things thanks to accidentally consuming a shrinking medicine and ending up about the size of a doll. After a few moments of irritation she handles this remarkably well, and chooses to spend the day riding on Yuzu’s shoulder in order to accomplish as much as she can by giving orders, since she can’t perform any physical tasks in her current state. But it’s thanks to this that Satsuki finally realizes something that viewers have hopefully been aware of for quite a while: Yuzu is actually quite a capable attendant, in many ways. While she still has a few flaws in terms of gracefulness and her naivete, she is very attentive and perceptive to the needs of the customers, and has good insight when it comes to figuring out how to deal with their troubles. Most of these are capabilities that she’s had since before she ever came to Konohanatei, but she has refined them with the things she’s learned there, ever improving herself. And Satsuki is, at last, consciously aware of that. 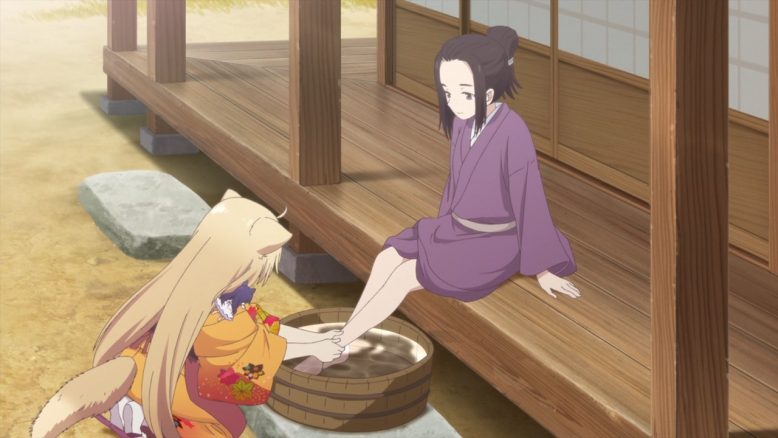 Of course, nothing lasts forever, and seeing poor Yuzu break down in tears after Natsume said something foolish in the baths is more than enough to convince us that Satsuki needs to return to normal as soon as possible. Yuzu really should not be crying. Fortunately the medicine-seller returns with the cure overnight, and Kiri administers it while Satsuki is still asleep. Of course, Kiri being Kiri, she can’t resist playing a bit of a prank suggesting that maybe Yuzu kissed Satsuki to break the curse. The reactions are… amusing. 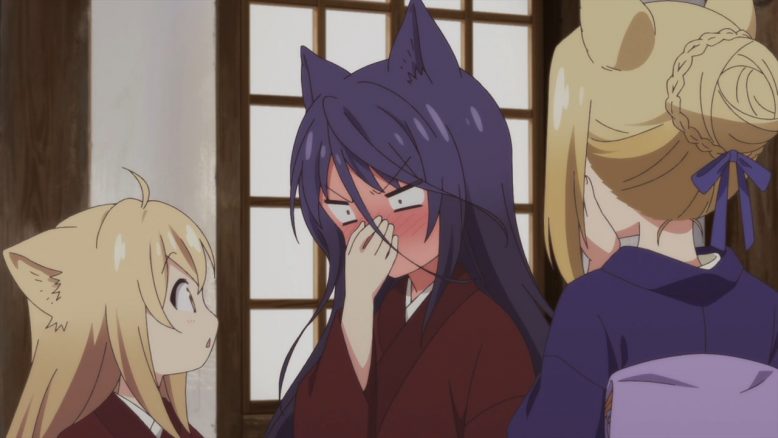 The second half of the episode finally brings Satsuki’s sister, Hiiragi, some much needed screentime. The beautiful, perfect, prodigy miko who captivates everyone with her beauty and her grace and her dance… turns out to be a rough-speaking, rambunctious, childish, willful girl who has no mind at all for maintaining the image of her position. She is also outgoing and charismatic: she is apparently always drawn to the center of a crowd, and can easily captivate everyone around her. That combined with a natural talent at dancing and singing is what led people to choose her to become a miko. 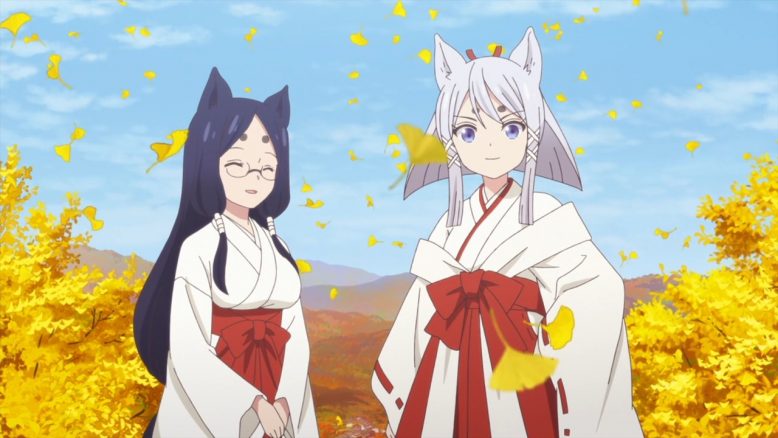 What’s interesting in this episode is that we finally get to see Hiiragi’s perspective on these flashbacks, rather than just Satsuki’s. This episode seems to indicate that, not only was Hiiragi willing to give up the spot as miko to Satsuki, as we saw in Satsuki’s flashbacks, but in fact Hiiragi no more wanted to be a miko at the shrine than Satsuki wanted to be an attendant at Konohanatei. Each of them desired the position that the other was assigned to. However, unlike Satsuki, who could have been a very capable miko, we discover that Hiiragi completely lacks the ability to be an attendant. She lacks the intelligence (can’t learn enough math to even do her multiplication tables), the patience, the respect for authority… she just has too many weaknesses to be suitable. And despite her personality, she is excellent as a miko, so it seems it all worked out for the best in the end. 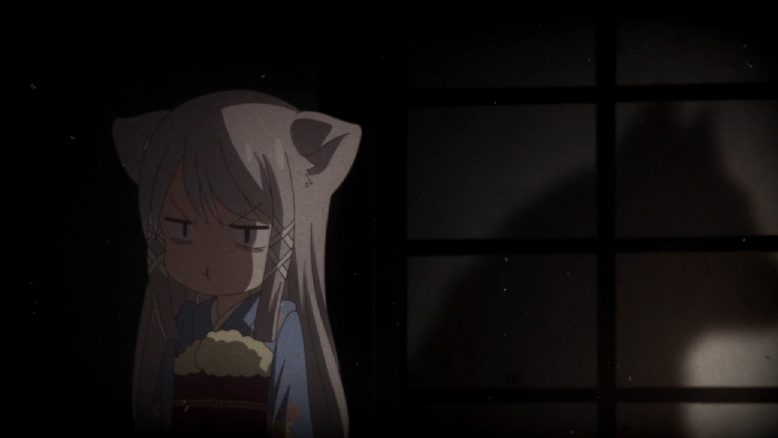 Indeed, despite a painful moment of tears when Satsuki is forced to recognize that her attempt at dancing the kagura doesn’t match up to her sister’s skill, Satsuki’s acceptance of her position as an attendant and her general mood have clearly improved significantly from the angry touchiness she displayed almost constantly in the first couple of episodes. Not that she can’t still be provoked (her temper is part of her character, and Hiiragi is good at teasing her), but she feels lot stronger and happier now in this position than she did when the series began. She’s grown, subtly but noticeably. 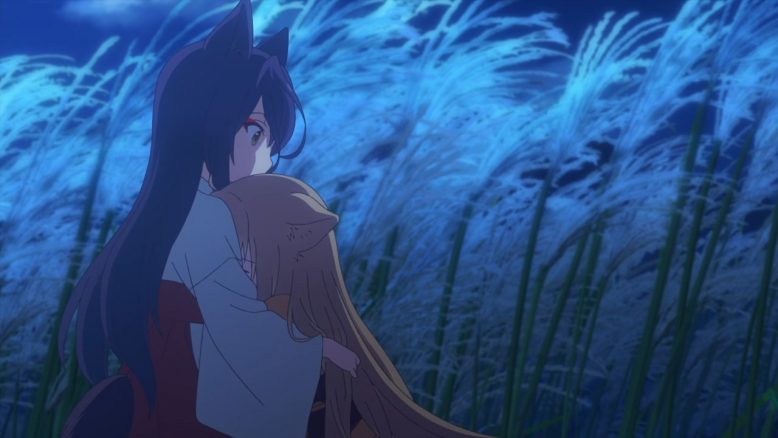 So that’s that. Episode 9 was a silly episode that didn’t go much of anywhere, but one gets those from time to time in series like this, and it didn’t hurt anything. Episode 10 was much stronger, focusing as it did on the development and backstory of one of our girls, and on a family member who was pivotal in shaping her personality. That’s the kind of thing I like to see. 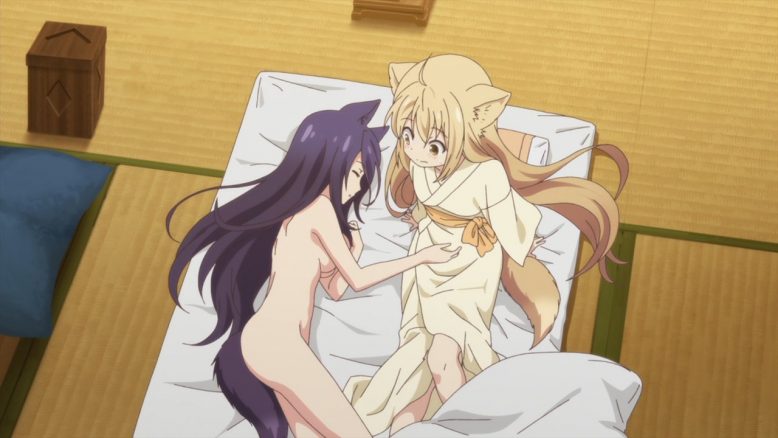