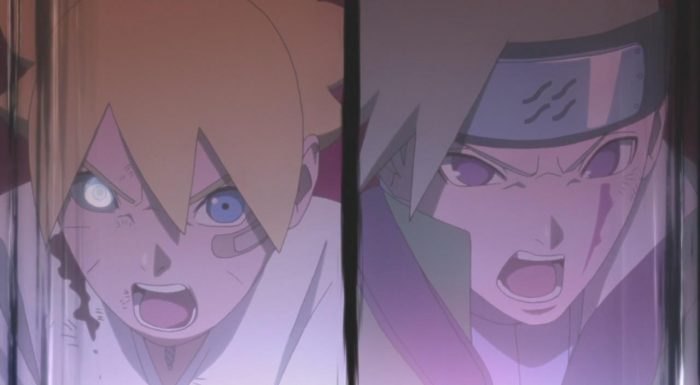 Well then… The battle part of this latest story arc ended pretty quickly didn’t it? Two episodes of fights, and now we’re back to what I think the producers of the anime series feel is the show’s bread and butter; A feel good children’s show. It’s quite sad, but when its all said and done, Boruto doesn’t seem like its ever going to be the dark, emotionally charged Shounen series that its preceding series was. 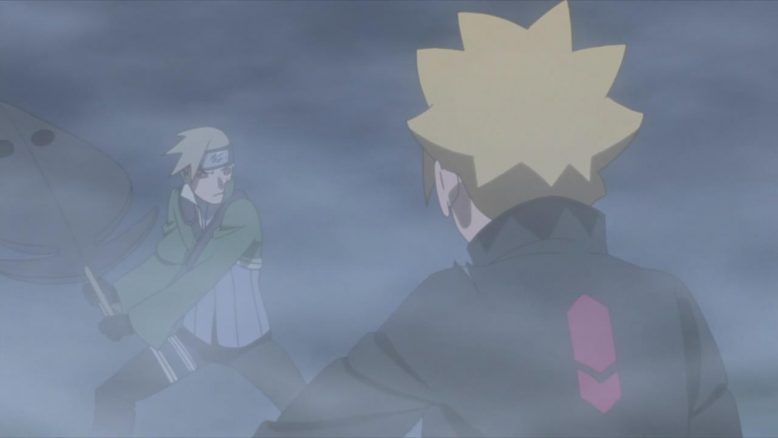 Kagura has a sword and he’s not afraid to use it…?

While last week was so good because it finally felt like we had jumped into classic shounen battle mode, this week pretty much made the rough transition back from that, into whatever it is Boruto is generally. Here’s the thing, the battle between Boruto and Kagura, and then later the whole conflict with Shizuma, was interesting. Interesting, well animated, a good deal of stakes, there were a lot of reasons to be excited. Then the writing and dialogue came in, and the cheesiness arrived, and then everything kinda just resolved from that point onward.

Here’s the thing, the whole Kagura angle of the story was ultimately very weak and yet was supposed to be emotional core of the arc. My whole issue with Boruto’s big speech and all that, is that his words felt hollow, because Kagura himself didn’t really feel like he had any internal conflict or personality. Kagura is a character that more or less becomes and feels whatever the plot needs him to. Last week we had the determined Kagura who actually felt like his warrior side was his true self, and this week we reverted to a confused, wimpy little boy that got moved around emotionally by two much more confident guys, i.e Boruto and Shizuma. 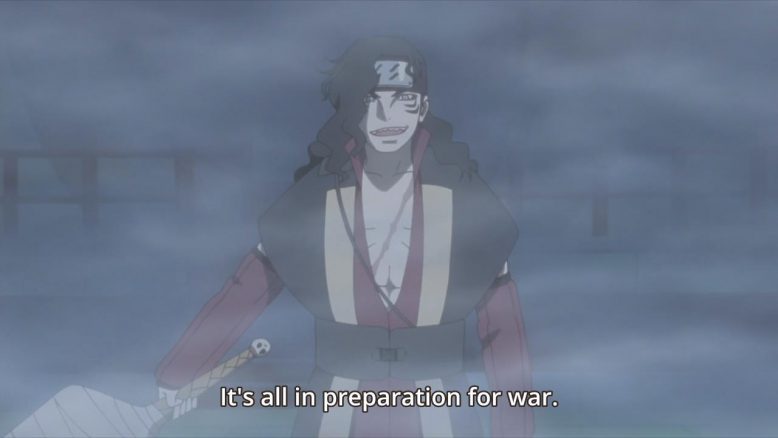 And Shizuma? Man, was he a disappointment. Instead of being someone who was truly evil, or clever, or smart, the guy’s lies get outed this week and he devolves into nothing more than a cartoon villain. The whole “I want to go on a rampage” shtick is so old, it practically hurt my ears to hear it retread on, AGAIN. How in heaven and hell did Shizuma actually manage to amass a group of followers and even potentially start a civil war with that kind of obvious, two faced logic? It just doesn’t add up.

Which is the general problem for the writing as a whole in this series. It feels like the show has these good ideas, but it never builds up or executes on them properly. It takes time, care, lots of hard work to develop any kind of story to a point where an idea becomes believable. Shizuma and his  whole thing COULD have been more believable, if we ever got enough time to see just how well he played the whole “I am the true savior of the Mist Village” shtick. 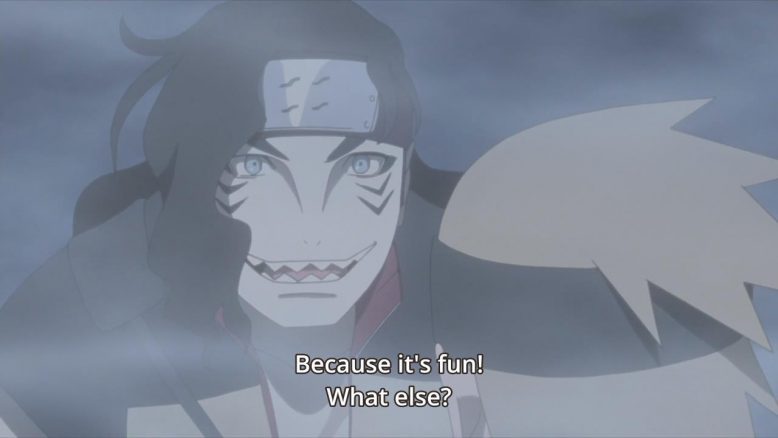 We’ve only seen that whole idea for three episodes, however, and after that, the fact that it gets undone isn’t surprising, its just stupid. I think Shizuma would’ve made for a much better villain if, in his mind, he actually believed the stuff he was feeding to everyone else. The best villains are, after all, heroes in their own stories. But Shizuma wasn’t a hero, he was just a slimey hypocrite who was messing with other people just so he could go around and fight to his heart’s content.

Oh and yeah, I suppose it WOULD have been interesting to see a character that was all about fighting, and didn’t care about anything else. Naruto as a franchise has DONE characters like that, and done them really well. The issue, however, is that Shizuma was never developed to be that kind of character, and the sudden shift from charismatic leader to “I just wanna have fun and kill people man!” just felt… Off and bizarre. 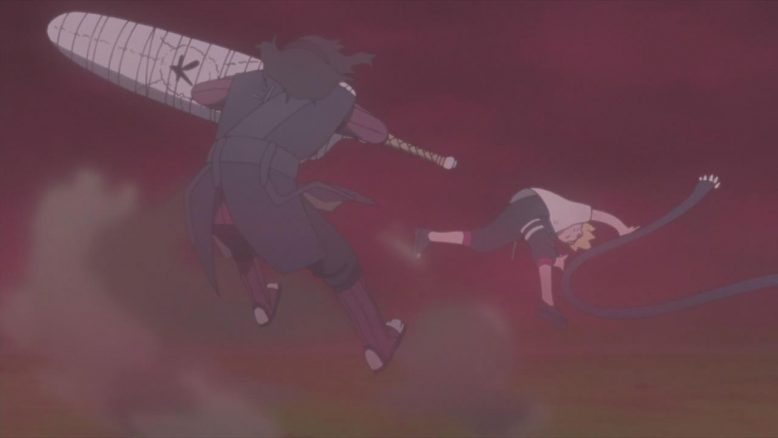 Some great use of Sakuga in those fight scenes.

On the flip side, while the reasoning for each battle and conflict was flimsy at best, the fight scenes themselves were really cool. It’s almost weird how the battle and animation for the show is slowly maturing into something proper and worthy of the Naruto brand, but the story just can’t seem to keep up with. To that end, things actually got a bit worse once Boruto and Mitsuki took down Shizuma the first time.

Shizuma’s sword, Samehada going bersekr was the one final chance for the arc to do something truly dark and interesting. There was an opportunity for the whole storyline to have consequences, for someone. I mean, at the very least, Shizuma should’ve at least been killed by the sword he was swinging around. Or maybe someone should’ve been fatally wounded? I dunno, the fact that this dangerous weapon went berserk, and that two kids basically took it down together, feels a bit too neat. 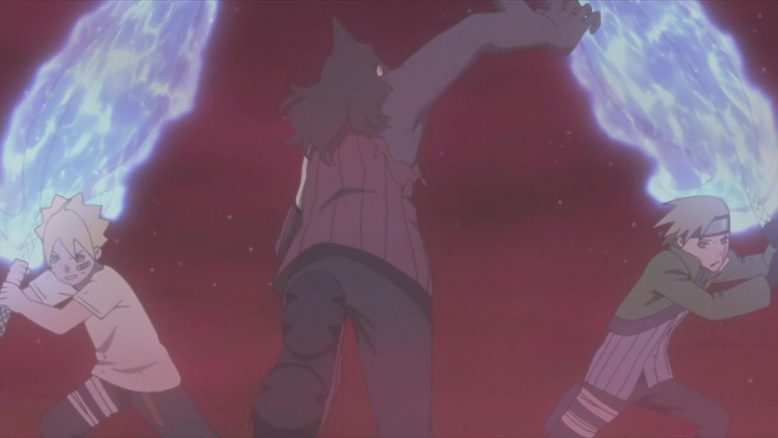 WE ARE DOUBLE DRAGON! (Bonus points for anyone who gets that reference XD)

It goes back to the general issue that this show has, it wraps up things too neatly. Kagura is a filler character, so is Shizuma, so there’s no problem if either of them die, or get injured, or lose a hand or something. We’re probably never going to see them again, especially after the show actually starts adapting the manga content, so why not do something interesting with these characters? Why not make us feel something? Have them die or suffer, or go crazy e.t.c?

Instead of any of that, all we get is Boruto and Kagura using the power of friendship, and taking him down without killing him. Everything ends well, and the kids head back to their class just in time for roll call. I mean, the roll call thing worked fine as a funny joke, but the fact that the show actually took the whole “Back before rollcall” thing so seriously, actually made it feel like a kid’s show. 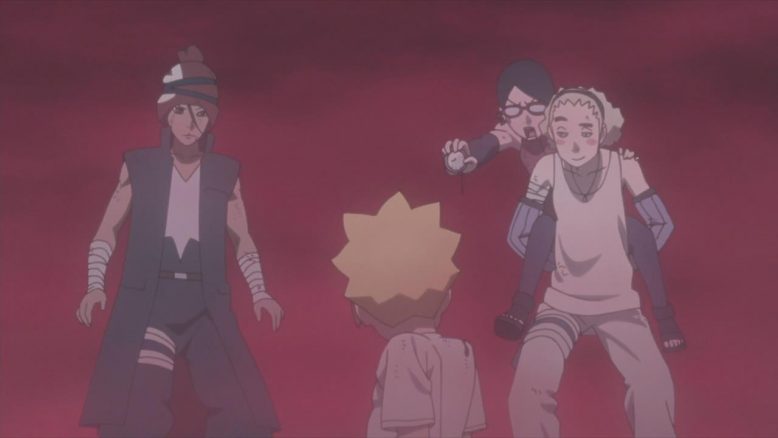 Sarada: “Its way past our bedtime Boruto!”

I’m reminded of the whole Power Puff girls phrase that I often heard on Cartoon Network: “Saving Townsville before Bedtime”. THAT, that is what Boruto NNG was actually presenting, tonally. And its not just physical consequences, Kagura himself basically gets off Scott free for basically participating in a rebellion. Yes I get that Boruto and Chojuro were trying to save him, but I don’t think that absolves him of all that he did.

In the end, I suppose, those sorts of things are just mere details to a show like Boruto Naruto Next Generations. I’m probably reading way more into the story than anyone who’s actually working on it. 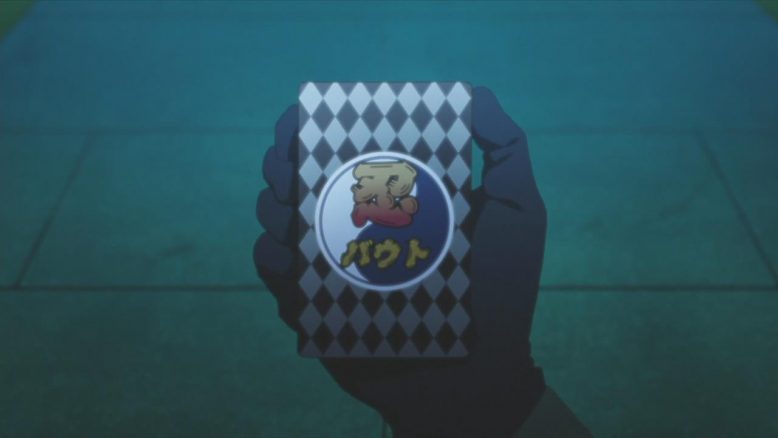 At some point, I guess, its worth just accepting that Boruto NNG is a kids show, that sometimes harkens back to the excellent tradition that preceded it. To that end, I’m not exactly sure where the show goes from here, and what its long term viability is. I just know that when next year comes and bigger shounen competitors come in, Boruto NNG is going to have to step up its game or risk being forgotten.