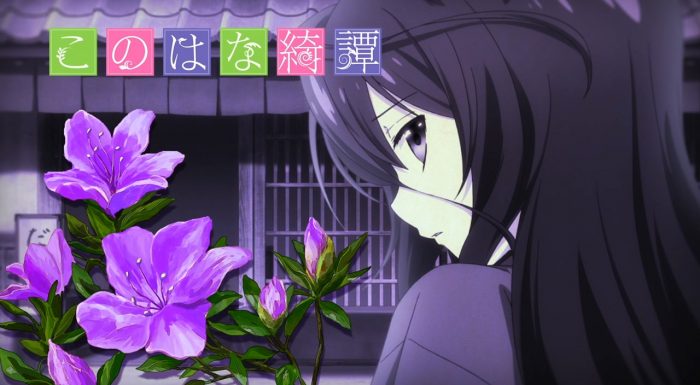 Well, I said last time that I suspected Satsuki being too serious for her own good would backfire on her if she didn’t stop to regain some balance. It looks like I’m not the only one who thinks so, since this episode starts with Satsuki throwing a fit because Kiri has ordered her to take a day off. She doesn’t want to be working at Konohanatei in the first place, and as a result she treats it like some sort of assignment where, if she just works hard enough at it, she can get it done faster and get out to go where she wants. Sadly for her, it doesn’t work like that. 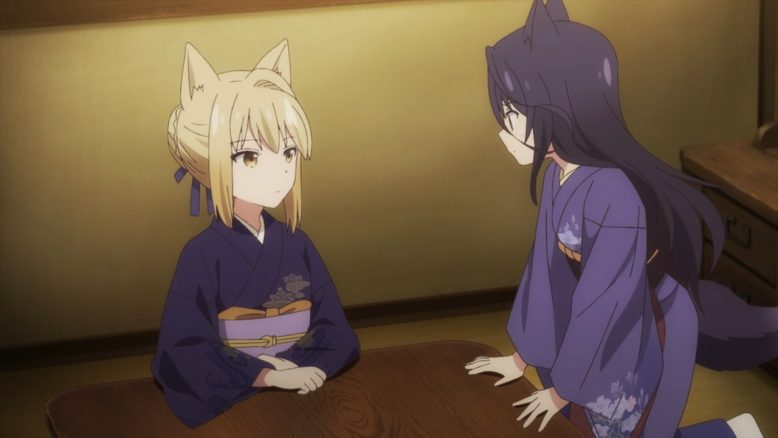 Fortunately for her, and us, Yuzu happens to be nearby when she storms off in a huff. Now, we don’t know what, if anything, Kiri tells Yuzu about the situation, but she shows up at the bath with sakura petals, a serving tray of saké, and some words of wisdom. Sometimes it takes the innocent view of a child to point out things that their elders have forgotten as they’ve “grown up.” There is value in being able to take a moment to look outside your day-to-day concerns, to look away from your own interests, to look up from your own feet so to speak, and see the world around you. Often there is much that can be appreciated and admired in it, but as we grow up we often forget that; focusing our attention on things that we consider “more important.” Characters who can look outside that moment-to-moment perspective and see the beauty around them have always been one of my favorite things about slice of life anime. Satsuki’s question “when did I stop looking at the sky?” is… significant. 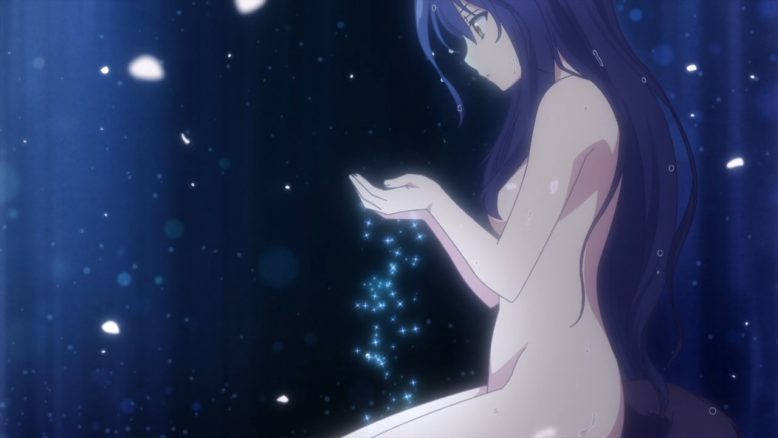 All of this manages to finally break the icy demeanor Satsuki has held towards Yuzu thus far (the saké probably helps too), and upon learning that Yuzu has the next day off as well, Satsuki invites her out to see the town with her. Yuzu seems to react to it more like a date than a friendly outing, but, well, never mind. It’s Ren’s interference to get the two of them looking presentable that finally tells us what’s been going on with Satsuki: her intent is to leave Konohanatei to become a miko at the local shrine. 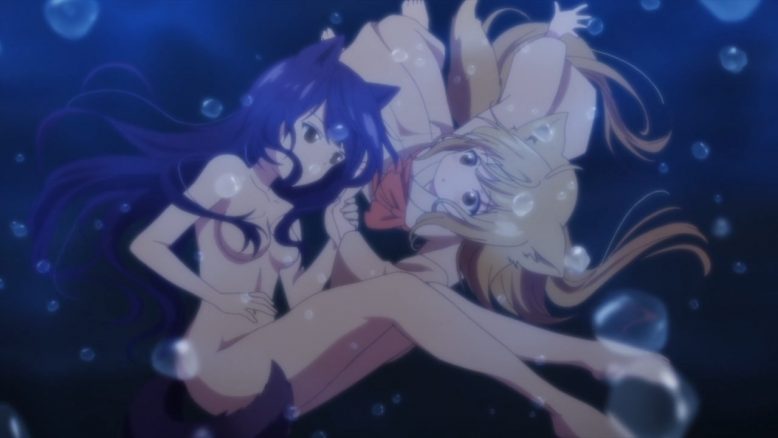 I do have to say that Yuzu and Satsuki are remarkably cute out on their date. Sitting there, sharing their treats with each other, with their tails wagging, they’re just all sorts of adorable. Yuzu, of course, is enjoying spending time with Satsuki, as well as getting the chance to see this town that is so different from the temple she grew up in. And despite her embarrassment and internal protests, Satsuki also enjoys being out with Yuzu. She even wonders why Yuzu isn’t triggering her tsun-side. 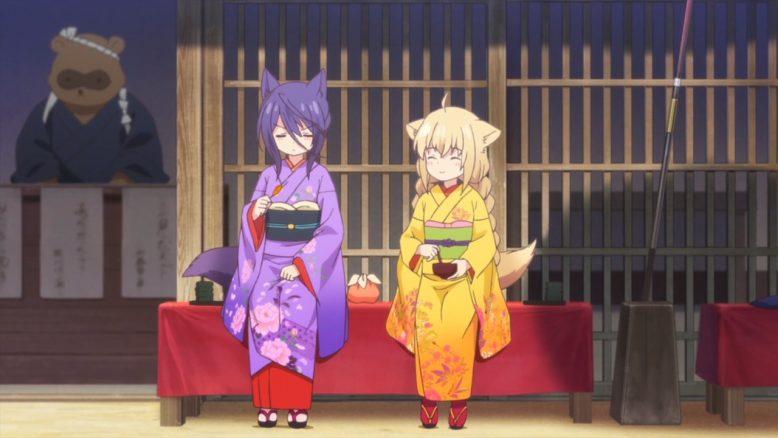 Of course, things can’t go completely perfect, as Yuzu eventually asks if they can visit the shrine. Every explanation she gives for why only upsets Satsuki more, and Satsuki eventually storms off, after ordering Yuzu to stay put so she doesn’t get lost. And honestly, after seeing Satsuki’s flashbacks and hearing the explanations, I can’t blame her for being unhappy. Being a miko and serving the gods at the shrine is what she wanted more than anything. Apparently in their family it was expected that one daughter would be sent to the shrine, and one to serve at Konohanatei. Satsuki’s sister, Hiiragi, had said that she wasn’t interested in serving at the shrine and that it would be better to send Satsuki, but apparently since “everyone” expected Hiiragi to go to the shrine, their parents chose to send her there anyway, and sent Satsuki to Konohanatei despite both daughters’ wishes. Now, in a setting like this it wouldn’t be at all out of place for there to be some degree of divine involvement in who gets to work at a shrine and who doesn’t, but right now we haven’t seen that that’s the case. And so, as it is Satsuki has a fair right to feel bitter about what happened. 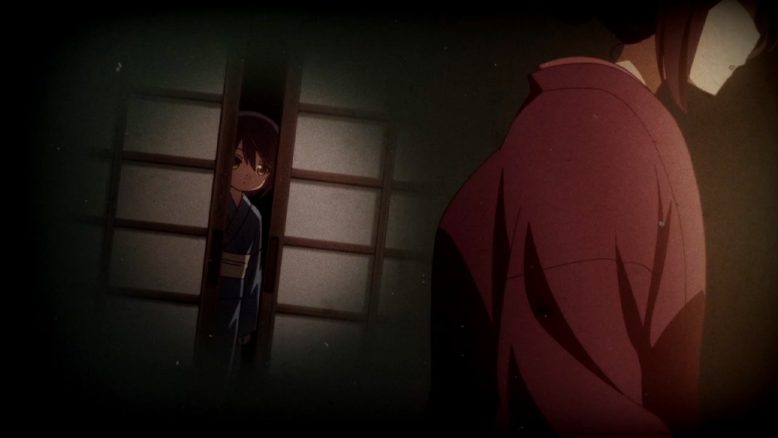 The encounter with the spirit sisters in the latter half of the episode is an odd event, and even having read that chapter in the manga I am still unclear of what exactly their purpose was in the story. Perhaps they are intended simply to illustrate the nature of the town. It sits on the border, between natural and supernatural, between the world of gods and the world of men, between the world of the living and the world of the dead… many who would travel from one such place to another will pass through it, and beings of all sorts may be found within it; including some that are not entirely on the same level of existence as our main characters. I do not know what exactly those two are, although from what the younger one said they are servants of the heavens who help ensure the well-being of Earth. They may be spirits of spring, minor deities… I can’t say for sure. 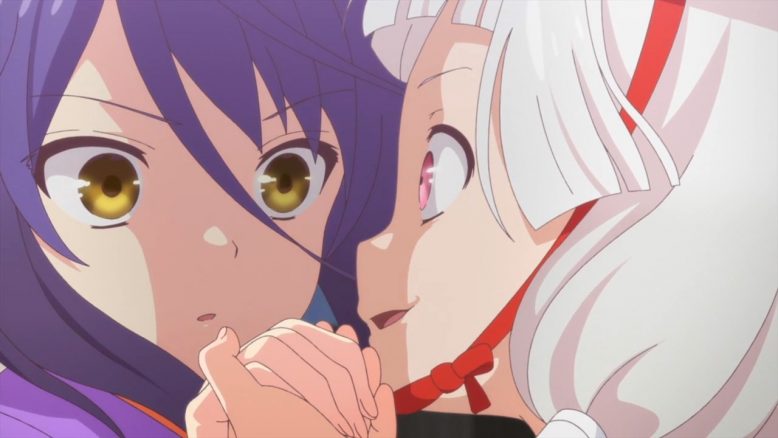 Regardless, the younger one seems to think she can make the shrine’s tree blossom (and thus impress her sister) by sacrificing Satsuki to it. Fortunately, her sister steps in before she can proceed, and makes it bloom properly, calming everything down. Although it is a bit odd that none of the people who started calling for a celebration or who began dancing immediately or what-have-you noticed Satsuki hanging apparently unconscious from one of the lower branches. That seemed kind of morbid: they’re there dancing while a girl is hanging there, maybe hurt, maybe dead, and nobody is even stopping to check on her… 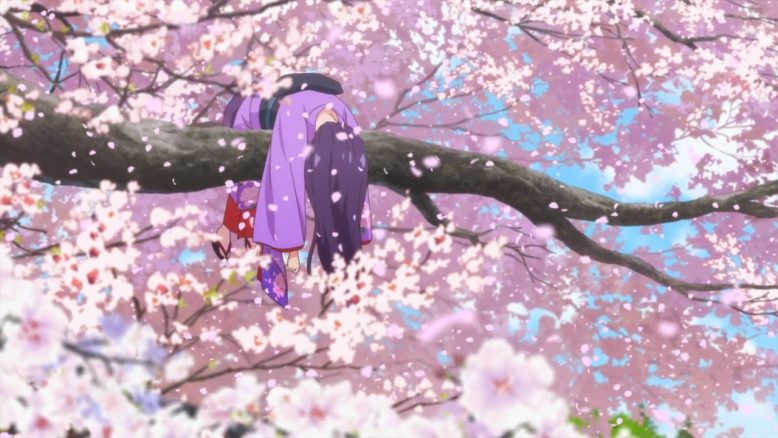 Anyway, it all ends well, Satsuki explains herself to Yuzu who, as usual, displays every emotion she feels right out in the open. The two of them are closer now, and our girls at Konohanatei are one step closer to being a proper family. I’m looking forward to it. 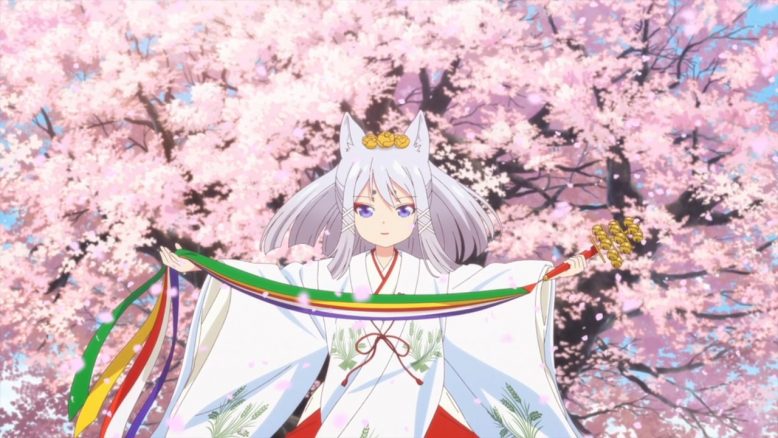 Hiiragi appears in the OP, so I’m going to assume she plays a bigger role this season than just being a background dancer here.