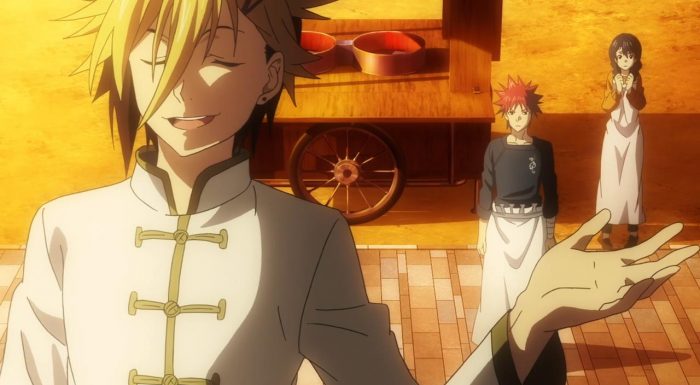 Although Shokugeki no Soma’s third season is stopping just short of being in top form, there’s still a lot to love about the show every week. Yes, this week’s episode was for all intents and purposes a pretty good one. There was significant plot progression, some nice character moments, a few mysteries, solid comedy and even the general atmosphere of the Moon Festival was pretty well done. At this point, three episodes in, you’d think that Shokugeki no Soma San no Sara would be firing on all cylinders. It definitely should… But I can’t really say that it is. At the end of it all, there’s just one small thing that, I feel, is holding the franchise back, this time around. 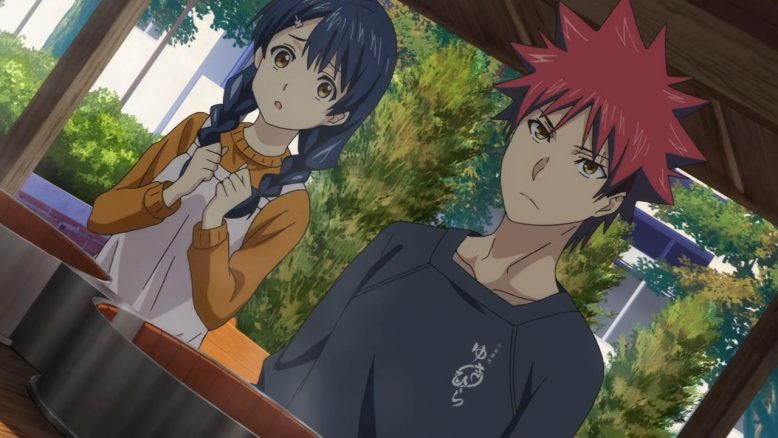 The issue in question, is something I’ve danced around a few times already. As the prominence of said issue gets larger however, its really getting harder and harder to ignore. Simply put, the pacing for this show just feels off. Its not immaculate, its not at the point or the level where I feel I’m able to truly enjoy everything that’s happening on screen. And here’s the thing; I’m not sure whether its an issue of the manga not being adapated slowly enough, or if the anime direction just isn’t presenting the scenes in a palatable manner.

My feelings and suspicions are definitely pointing to the latter, rather than the former. See, while its been a while since I read the manga version of this story arc, I do remember the same sort of events happening at this particular part in the story. Nothing really feels like it was omitted, and if there was something axed, it clearly doesn’t feel like it was all too important to begin with. So the only thing I’m left to surmise is that the anime itself is just not pacing things properly, even if it’s adapting everything that’s key here. 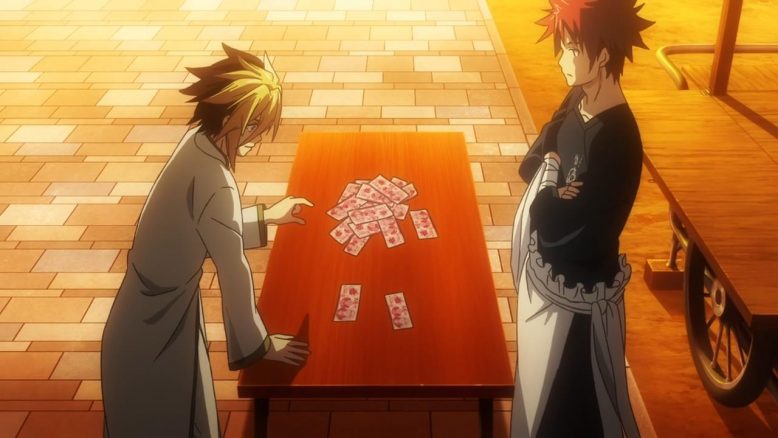 The key scenes and moments themselves are definitely rather enjoyable, and definitely keep the general entertainment and thrill of the show going, on a moment to moment basis at least. There’s a few things here that the show is articulating really well, and I’d say that most of those things relate to the conveyance of feelings, more so than anything else.

There’s Kuga and Soma’s ongoing competition, for one. It really does feel like Kuga pretty much dominates over Soma, at least in the first two days of the festival. There’s a clear sense of Kuga asserting his dominance and kind of enjoying the fact that he’s moping the floor with his cocky kouhai (junior classman), There’s a real sense of playful I told you so emanating from Kuga, but I don’t think it ever gets to a point where its overbearing. Kuga is winning, and he’s rubbing it in Soma’s face, but at same time, there’s small moments of kindness that really prevent the guy from being a complete jerk. 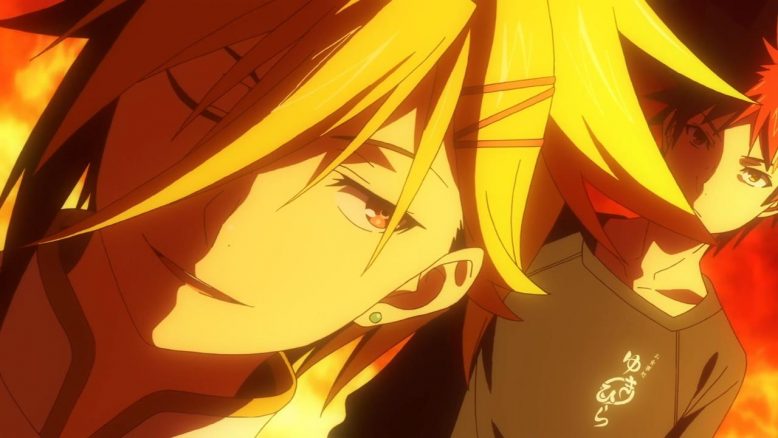 Little hints like Kuga touting to Soma that the Moon Festival is different from a Shokugeki, or Kuga constantly checking in on and monitoring Soma, are moments that make the guy likeable. Despite all the odds, it seems like Kuga actually does respect or at least seem interested in Soma as an opponent. Maybe its Soma’s outlandish and competitive head strong attitude, but something in Kuga has him wanting to see Soma rise to the occasion. And that’s an interesting dynamic, its something that we haven’t seen from the show and story thus far.

Every opponent Soma has taken on, even the ones that later went on to become likable friends, have always had a sense of arrogance and selfishness to them, that has made them pretty easy to hate. We saw that with Nikumi and Shinomiya, two characters that I’ve grown to really love, and how’ve really moved into Soma’s corner at this point. Kuga though? He’s kinda already in Soma’s corner, even as he competes against him in this latest arc. That shows range, and I think it keeps the series as a whole, fresh and interesting. 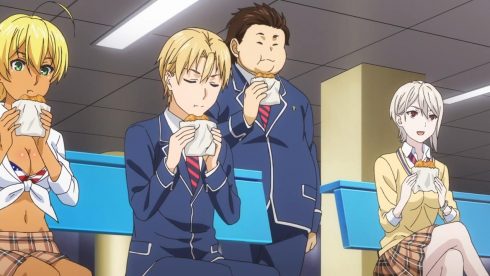 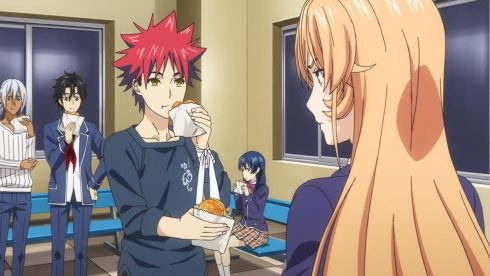 Beyond the central conflict though, there’s also that continued sense of friendship and comradery between all the finalists of the Autumn Elections. And I have to say… Some of my favorite moments in this series continue to be the moments where Soma and his friends just hang out and chill. Whether its Erina continuing to be the only person to detest Soma, or Ryo and Hayama each comparing their own cooking to Soma’s, or Nikumi and Aldini each being totally tsundere for Soma, these are all really nice character moments and interactions.

Even Sadako, a character that I’ve never really cared for, has a nice little moment with Soma and Megumi outside, at the end of the second day of the festival. Its not just Sadako though, one of the funniest and most entertaining dynamics in this arc has to be the Alice, Ryou and Hayama combination. Every moment between them is just chuckle worthy, as the three are really as bad of a combo as they would seem to be, on paper. But the fact that Hayama, Alice and Ryou are trying to even work with each other, is noteworthy and kinda makes you want to root for them. Its just good character work, and that’s something that I truly do believe, Shokugeki no Soma has no shortage of. 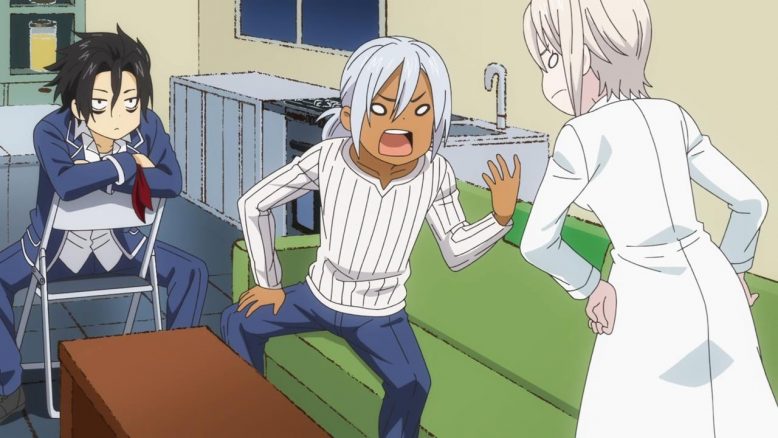 Finally, there’s the issue of the cooking and festival itself. There are various groups enjoying themselves, and there’s a real sense of hustle and bustle to the whole Moon Festival as a while. And in the midst of all that, we have the growing issue of Soma and Megumi really lagging behind and in real danger of being expelled. Much more so than before, we’re at the point where Soma hasn’t been able to break through his current challenge. Is there even a solution this time? Its hard to say, although it doesn’t seem like Soma himself has given up yet. There’s the question of what Soma’s big plan is, and who he was talking to and handed the key over to. There’s in general, a good sense of mystery brewing, and while I’m sure Soma will make it out of this one as well, I’m excited to see HOW exactly, he does it.

But having said all of that, its worth going back to that issue I outlined earlier; the pacing. 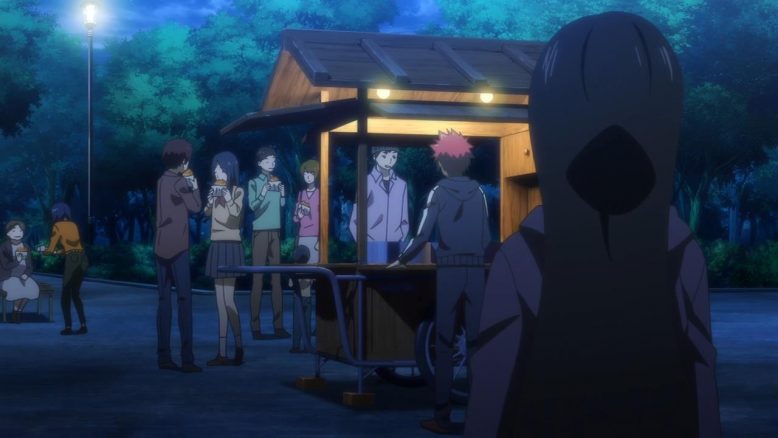 Stick with me here, but I think its worth outlining a general fact about manga to anime adaptation. Often, I really do believe that its hard to tell just how much effort actually goes into a proper and skillful manga adaptation. Manga is a different medium, and there are scenes and moments that are never shown between each panel, that a more complex medium like anime has to deal with. And that’s where I think the issue of this week’s episode really lies, there’s just no sense of transition or flow between each of the seemingly awesome scenes we have in this episode.

We almost jump from moment to moment, as if we’re moving through literal pages without the necessary transitional tricks that make the anime medium distinct.  The show opens up with Kuga and Soma’s whole thing in the morning, and then we jump straight to the evening, where the announcements of the day’s rankings are done. We barely have time to digest that, when the show shifts into that nice little scene of all the Autumn Election finalists chilling together. Then we jump forward to another point in time, and this time Soma’s talking to someone in the dark. Then its the next morning and we’re with the Polar star dorm… Etcetera, etcetera. 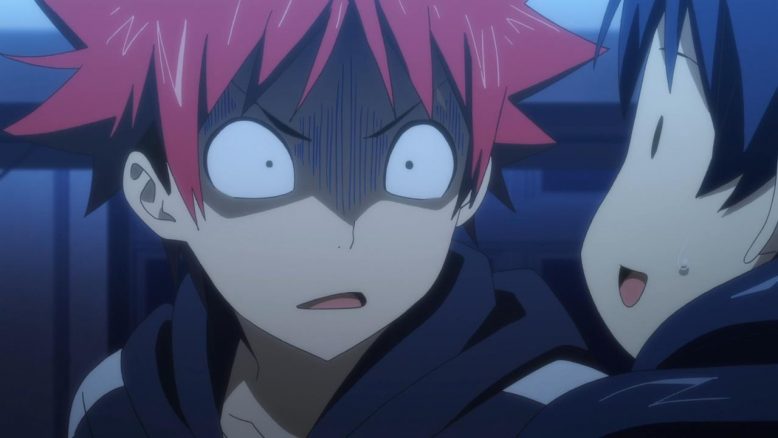 The shifts are so quick, and so jarring are the shifts in pure time, that things just feel off. There’s a sense of rushing, and I feel like the show needs to spend a minute or two more per scene, just to space things out and allow the audience to breathe. And the fact that the show doesn’t do this, makes the whole thing feel a little less perfect in the grand scheme of things. A rushed pace can hurt momentum just as much as no progression at all, and its surprising to see a show like Shokugeki no Soma make such a rookie mistake.

I’m still not sure why the show is doing this. It has enough episodes, so either it just doesn’t want to spend enough time on the Moon Festival arc, or there’s just a lack of talent on display here. Either way, I’d say Shokugeki no Soma, San no Sara is still pretty enjoyable… Its just a bit rough around the edges these days.