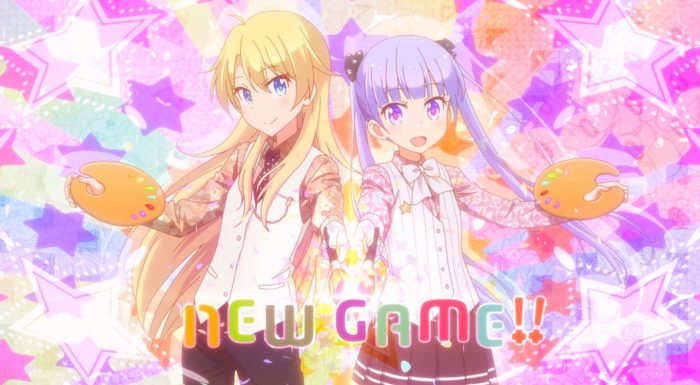 The final episode is here, and it’s a whirlwind of emotions. Watching this all play out I still wonder if this was the way things had to go. Certainly some of the choices that led to Ko making her decision to leave are things that I feel didn’t have to happen. But whether changing those would change Ko’s belief that she’s become complacent in her current position, and that she needs to leave and focus on improving her own skills for a while… I don’t know. That may have been an event that was set in motion long ago, and all we saw were the catalysts that served to solidify it from a feeling into action.

Anyway, starting from the beginning there is some other stuff here that is worth taking a moment to speak about. Ko’s presentation at the post-production event… going off-script and bringing Aoba onto the stage is one of the most satisfying moments in this series to date, in my opinion. Ko was able to give Aoba the credit she deserved, and present the fact that someone other than herself was truly responsible for most of the visuals on the project in a manner that made the press and the public excited for the game rather than upset at the seemingly deceptive marketing. It was remarkably smoothly-handled, especially for someone whose specialty doesn’t really involve talking to people. I believe it will go a long way towards preventing the potential disaster I predicted when the publisher first informed them that they’d be advertising the game under Ko’s name. But most importantly, it sets things right again for Aoba and Ko. Even though they’ve accepted the situation and moved on since the painful events in episode 6, the fact of the matter is that Aoba deserves to be recognized, to stand on that stage and be known as the one whose work sparked Peco into being. Ko knows that very well, and I’m really glad she was able to find a way to make it happen. 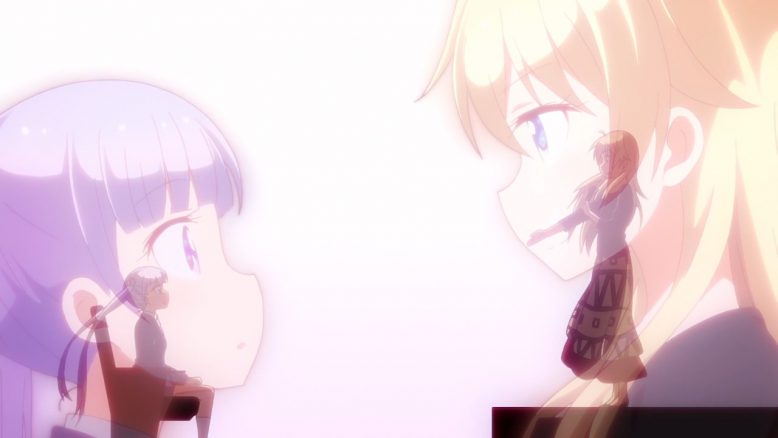 Still, that can only hold us for so long. After the presentation Ko makes her announcement to everyone that she’s leaving, and it clearly comes as a shock to all of them (except Rin, who’d not only overheard it, but who Ko had told before everyone else). With all that forewarning Rin has had time to build her poker face up and pretend that she’s ok with this. The others don’t have that luxury, and Aoba in particular is shocked beyond words. The camera angles here really highlight it, with everyone clustered around Ko in surprise, except for Aoba who is off to the side, alone, her face a clear window of shock and confusion. Aoba had no clue that such a thing was going to happen; it hadn’t even occurred to her to consider the possibility; and she has no idea whatsoever what to say or how to respond. The confusion and uncertainty and shock and pain and loss and sadness and many other feelings all massed together all rise up to choke off any words she might have spoken, and she can only stand there silently.

The heartfelt moment between Rin and Ko, when Rin breaks down after the party and admits that she can’t handle the idea of Ko leaving, is something that has needed to happen for a long time. I know I’ve mentioned before how much I like the representation of their relationship, as two people who have been with each other so long that they simply understand each other and don’t need words to communicate most things. However, even for pairs such as this, there are times when words are absolutely needed; when things cannot simply be left off on the level of that “understanding.” The two of them baring their hearts to each other is truly touching and brings tears to my eyes… which Hazuki promptly banishes by speaking up to remind them that they weren’t actually alone while having this heart-to-heart. For a few moments it looked like they’d forgotten there was anyone else in the world. 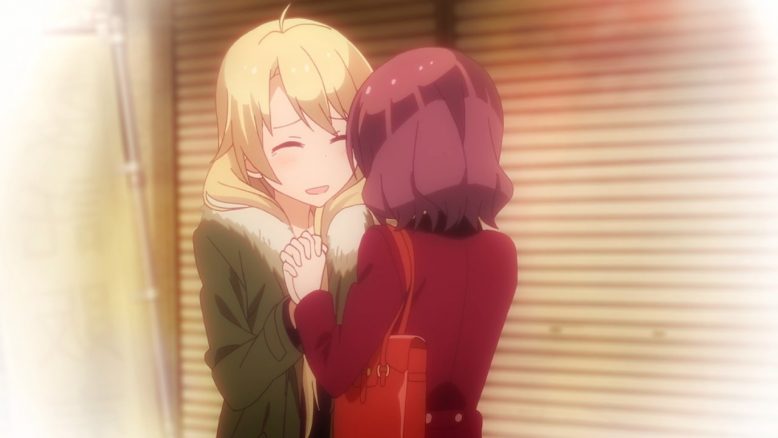 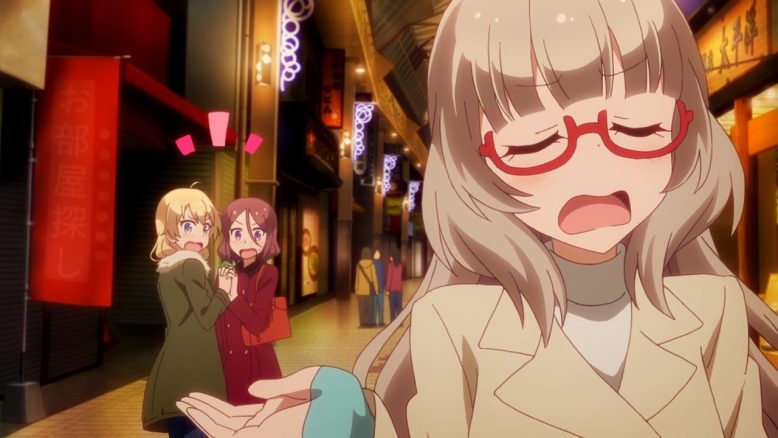 A week later Aoba is in the office early, certain she’s the first one there, when she hears a noise from Ko’s old desk. The look on her face, and the absolute silence from the soundtrack, speak volumes here. There is surprise and uncertainty and fear and hope all mingled into one. Even though Ko is supposed to already been on her way to the airport, a part of Aoba wants her to be here, in the office, where she has always been. She isn’t ready to let Ko go; not inside her heart. When she sees the empty desk and chair, and just Mozuku there making noise, the disappointment is palpable, before she tries to paint it over with false cheer. Somehow that has finally driven it home that Ko is gone, and that the things left unsaid and undone between them will stay that way. 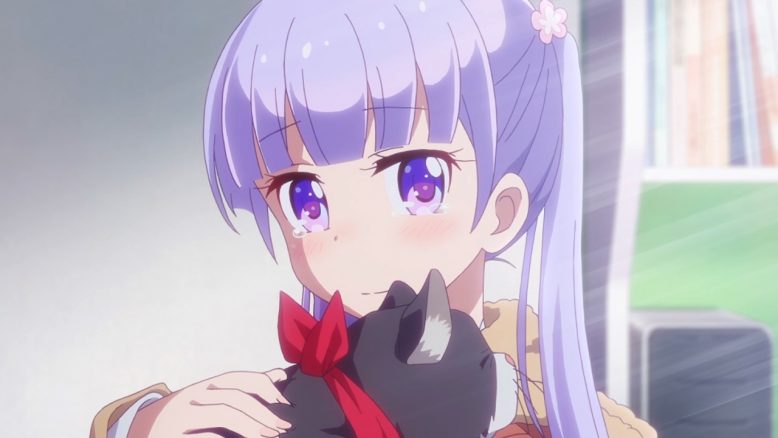 Thank Heaven for Momo coming in right then, seeing Aoba crying, and coming up with exactly what need to be done. Right now work isn’t so urgent that it can’t be put aside in the face of this. Production is finished, the game is ready to ship. The teams should be basically winding down for a bit between titles. And Aoba needs to do this. She can’t just go on with things left unsaid between them. And so when she finds Ko at the airport Aoba finally speaks from the heart, letting out what she’s truly been feeling. Her anger at Ko for acting irresponsibly without thinking of how she affects others. Her pain and sorrow at having the one person she respects more than anything walk away and leave her behind. Her confusion as to why someone who is already so skilled would need to leave to learn to become still better. 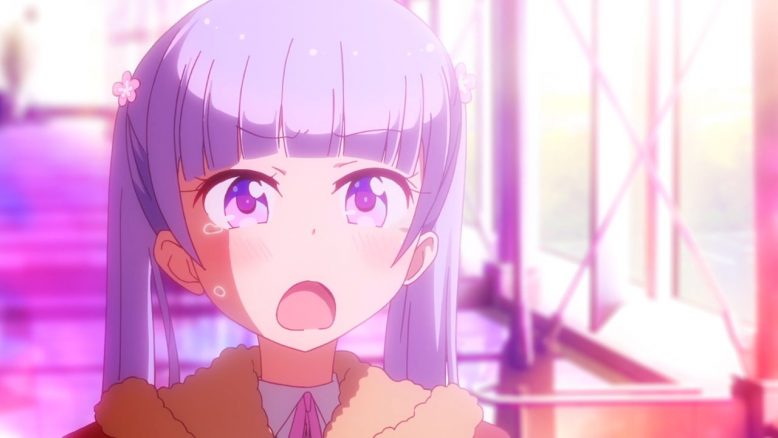 Ko pulls her into a hug to explain that Aoba herself has served just as much as Ko’s inspiration as Ko has served as hers. When she saw Aoba working on her piece for the key visual competition with her whole heart and soul, Ko realized that Aoba had something that Ko herself no longer had. A feeling that used to be a part of every project had somehow gotten lost beneath complacency and routine and the certainty that she was the best at what she was doing. She was losing herself, losing the part of her that had driven her to chase her own dreams, and to overcome that she had to shock herself so thoroughly out of her comfort zone that there was no way she could come back in. Also I suspect the key visual event itself was a motivating factor. When Aoba’s hard work and talent was shoved down and away in a corner in order to use Ko’s reputation, she realized that her very presence in the company was serving to hinder these younger employees that she was trying to help raise. By spending time away the others have a chance to come fully into their own without her unintentionally blocking them. 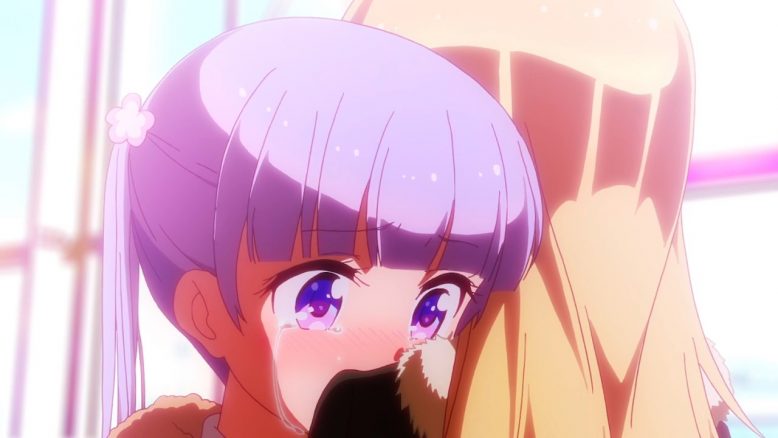 Really everyone showing up at the airport for one last goodbye is heartwarming, and yet it’s also completely right. In her own way Ko has help shape the lives of all of these people, even the newcomers, and she deserves a proper farewell as thanks. 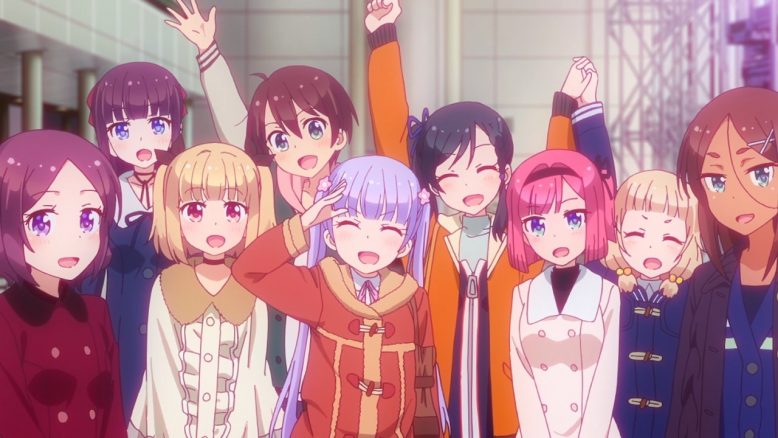 This was  a powerful episode, as an end to a strong series. I found myself crying multiple times during this episode as the emotions involved struck home. That is really one of New Game’s greatest strengths: the ability to mix comfy slice of life with simple yet compelling dramatic scenes that truly strike to the heart. This has been a strong season. I can’t say for sure right now if it has been as strong all the way across the board as season one (I’ll take a closer look in the overall season review post which will hopefully be coming soon), but when it was good it was very good indeed. I’m very glad I took the time to watch it. 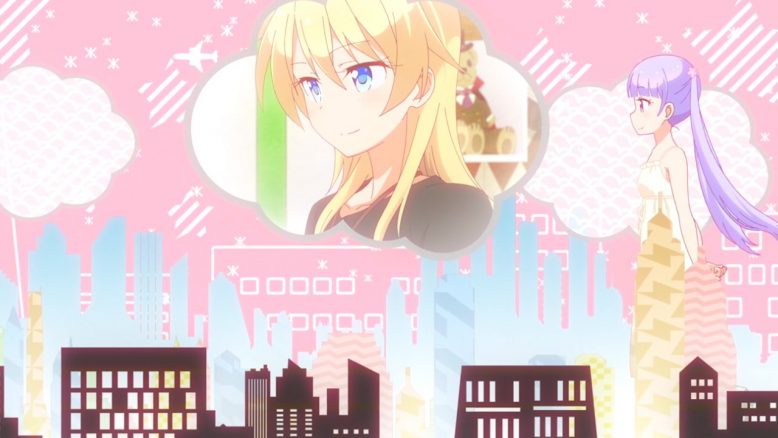 Did you notice? In the ED this final time there’s a tiny plane flying away in the background as the memories of Ko play out in the forground. 🙁