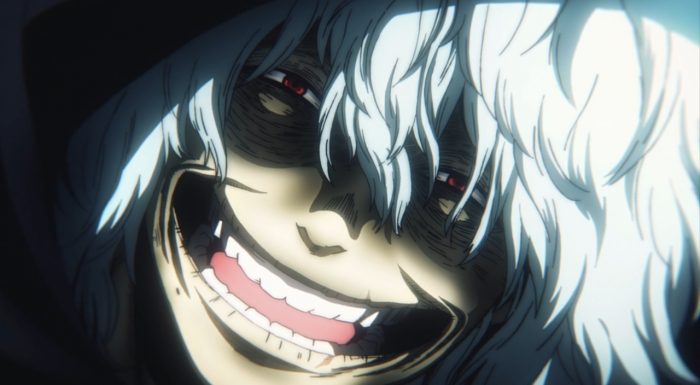 Well that’s it for another season of Boku no Hero Academia. We got to see the League of Villains take some legitimate steps forward as a threat. There was also the very tense meeting between Deku and Tomura. You get the feeling these two are going to seriously clash down the road when Deku has greatly matured. Right now he just couldn’t do anything, but try not to panic. It was a solid move to end the episode with the announcement of the third season. Of course it should be obvious they will keep coming back with seasons. This is just one of those shows that will keep coming back. I do appreciate that they aren’t just making this a long ongoing show that never takes breaks. Instead they can pace themselves and when they eventually catch up more with the source material…they can wait on it. 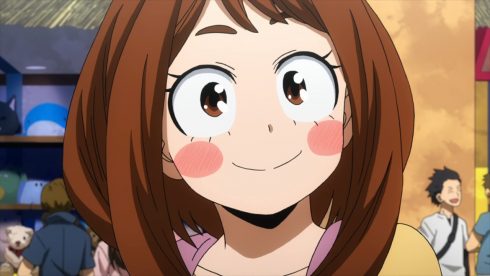 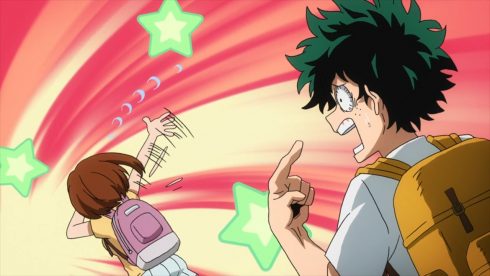 On the positive side we did get some more cute moments developing Ochaco’s feelings for Deku. She hasn’t really accepted how she feels yet which did lead to some comical reactions on her part. Hopefully she doesn’t hurt her own chances though since Deku’s lack of confidence can interpret any weirdness on her part as disliking him. Honestly I really do pull for the Deku and Ochaco ship. They are both likable people and I’d be fine with seeing them end up together down the road. And I did like seeing her step up when realizing that Deku was in trouble. Naturally she was shaken up by the situation and there are issues with student heroes using their abilities to fight without permission.

It was a scary moment for Deku as well. This was a kind of “oh god” moment where everything might have gone to hell if Tomura had decided to risk everything and pick a fight. He knew that if it came down to it that he could kill both Deku and Ochaco without much trouble. It was his life on the line, but also hers. In the end she did basically end that clash and reported what happened to the proper authorities. It was a scary moment for Deku and Ochaco really who could have easily been killed here. 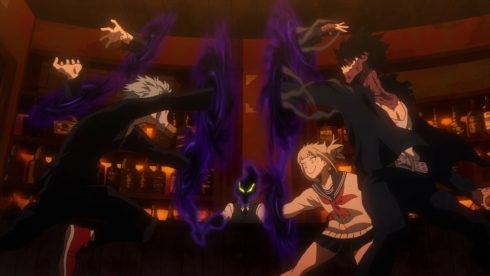 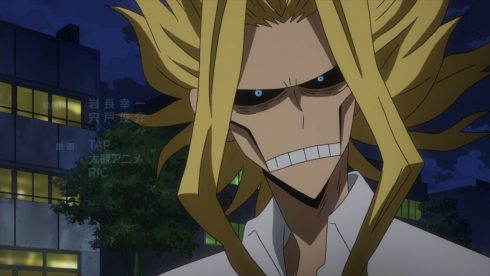 I can’t say it’s a good thing when Tomura ends up finding his sort of conviction. He’s only going to get more dangerous and is seemingly willing to accept the newcomers that are drawn to the League of Villains. He’s stopped simply pouting about not getting enough attention and will use what the Hero Killer did. I really wonder what happened to this guy to make him so utterly messed up. That kind of quirk I suppose can lead to tragedy pretty easily. Lose your temper and boom could disintegrate someone. Regardless of what happened to him, Tomura is utterly broken. His focus has been returned to ending All Might and ending the smile that he thinks is thoughtless. When in reality that smile has so many layers and thought put into it.

It is a worrying thing seeing that guy gain legitimate allies. That girl is just…weird. No idea what her quirk is, but she clearly has no problem resorting to bladed weaponry to get the job done. The other guy just looks….damaged, though it is a bit easier to see that he has a quirk that he can and will use to attack people. He is someone to talks about looking up to Stain’s ideals, but you wonder if he truly understands them. 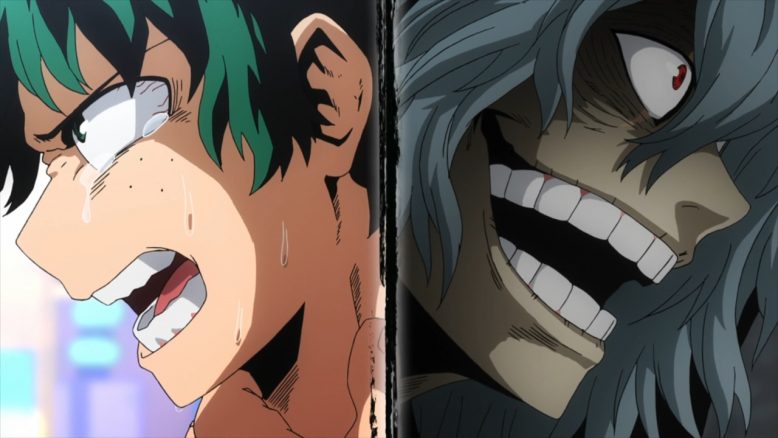 I really wonder what this All for One guy has in mind for Tomura. He keeps talking about making Tomura the next him, but what does that really mean? Does someone with the quirk that takes all power for himself really care about having a successor? If he had the ability to take bodies or something weird like that you’d think he’d already have transferred himself out of that injured one. Maybe he wants a pawn or something. Tomura is a pretty crazy and unstable person, while All for One seems more of an intelligent kind of villain. Not exactly a clear cut successor to his mindset or beliefs. But to be fair we’ve seen very little of this guy so it is hard to fully grasp his personality.

This wasn’t the most exciting episode in terms of having action in it. But what we did get was a real personal meeting between Deku and clearly a major villain for this franchise. This can’t be the last time they will meet, but probably the last ‘chat’ they’ll have without fists flying. Deku has a lot of growing to do. He’s got to reach a point where he can stand up against a dangerous guy like that. Hopefully he’ll be ready for their next meeting. 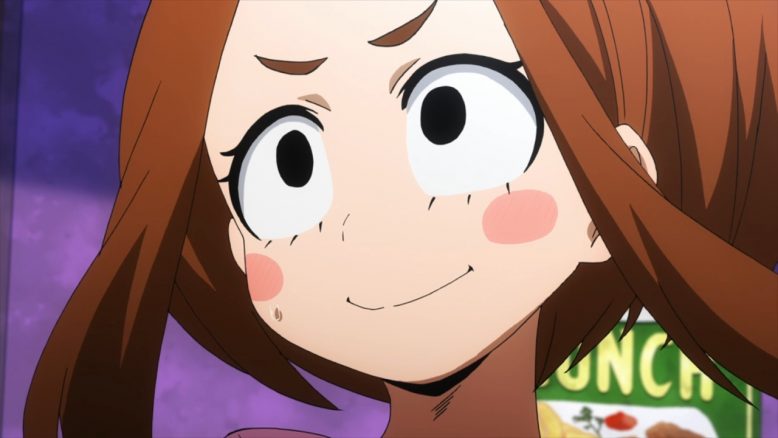 The face of denial

Final Thoughts
This was a good second season for Boku no Hero. I enjoyed the sports festival, the clash against Stain, and the final exams. There was a lot of good action, character growth, and setting up for the future. I really enjoyed the sports festival most of all. It had some really strong moments like the clash between Deku and Todoroki. We also got to see the start of Momo’s character arc for this season in that event. There was even a big moment for Ochaco as we got to see just how tough she was in her fight with Bakugo.

Of course there are a lot of highlights in this season, but I’m glad that a lot of the cast got chances to grow. Characters like Iida will be carrying the emotional and physical reminders of what happened to them this season. We even reached a point where Deku had to start changing his way of fighting or else he’d permanently ruin his body. The full cowl business was a big step forward. But even with that development, Deku has a long way to go in order to truly tap into the power he has at his disposal. 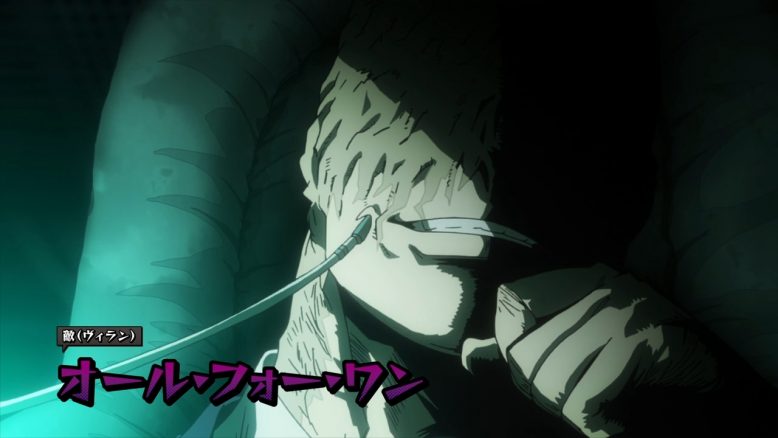 I’m just glad that this was a show that didn’t remotely disappoint me. The visuals remained great as always and the story really progressed this season. For me it is exciting to imagine how far we can get in season 3. There is a lot to build on here and I think this season had moments that will change the status quo going forward. The Stain incident was an intense one, but also one with a lasting impact. Stain now becomes a kind of symbol and spark for the darker aspects of society. Here’s hoping the main cast and the pro heroes are prepared for what might come their way.