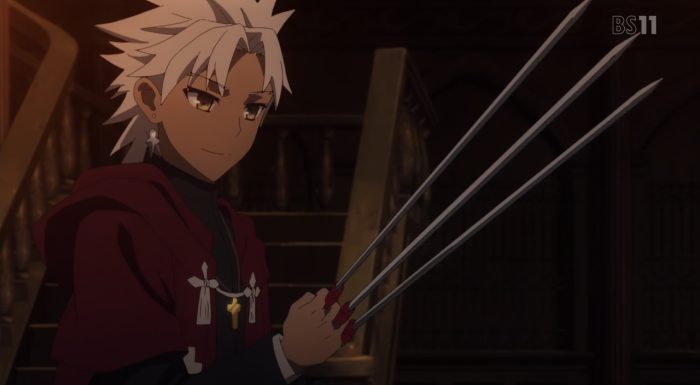 Well…that didn’t quite play out as expected. I mean a lot of this episode caught me off guard. The only given was that Darnic was going to use those command seals to turn Vlad into a vampire. I didn’t expect that things would turn out like this though. It was surprising that his vampire form was almost a Berserker and frankly a more impressive Berserker than the two we got this series (still loved Fran though). I’m not sure if Darnic’s plan was genius or just incredibly stupid. I mean couldn’t he have just used the two command seals to transform Vlad and send him after the grail? Did he really need to gamble everything by merging his spirit with Vlad? For a guy who has been planning carefully for decades….this seems like a crazy move. 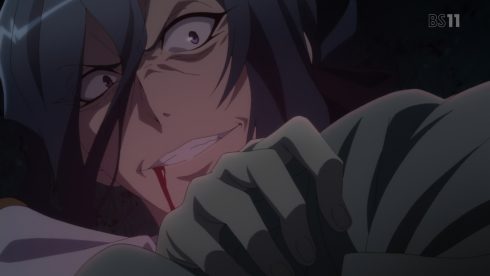 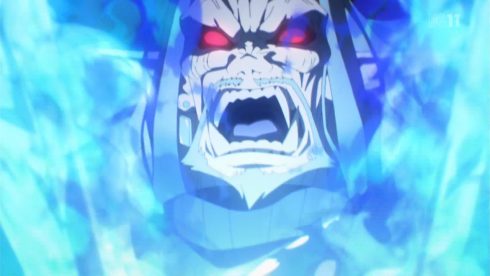 In the end it totally blew up in his face. One of the most powerful servants in this war is gone. The Black Faction is basically doomed at this point in the game. Who do they still have that is really on their side? They’ve got Archer, Caster, Rider….yeah I think it is literally just them. Saber basically turned into Sieg who is a free agent. Assassin is also basically a chaotic element that doesn’t side with anyone. They are really in trouble here. Of course with the reveal maybe this war takes a completely random twist, but right now they are in deep trouble. They can’t even handle Karna with the forces they have left now. Of course things are pretty chaotic in general. The only Red Servant who has a normal master that isn’t dead/drugged/whatever is Mordred.

I’m really curious where the heck the story is going here. Right now the majority of the red faction’s servants don’t really understand that their masters are dead/drugged/whatever and that a crazy rogue Ruler servant is controlling them. The Black faction that is still alive and safe have no idea what is going on here. At this point only Jeanne is starting to realize how serious the situation is right now. A Ruler servant like herself is basically high-jacking the Holy Grail War for his own interests. And he has almost all the cards. Most of the servants are either willingly working for him (Assassin/Caster) or have been duped into helping him (Lancer, Rider, Archer). He’s also gained control over the greater grail. And no doubt this situation has to be overwhelming for Jeanne. Someone like her is breaking all the rules and causing this chaos…to save the world. 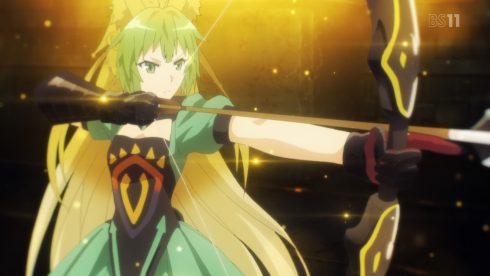 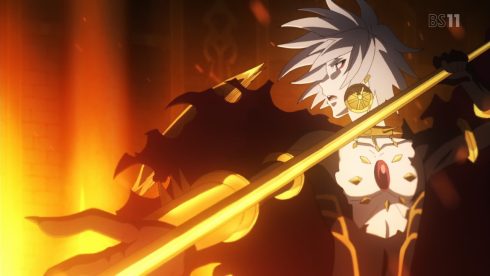 That was a solid ploy by the show though. They made him out to seem like a purely crazy priest. He seemed to be a legit member of the Kotomine family who are usually villains in this franchise. Instead he’s actually a heroic servant and a Ruler class. I’m curious about a few things though. For one…why did he have an Einzbern master? Aren’t they usually participants in this war? But one wouldn’t summon a judge for the war as an active participant in the war. Though I can understand why the grail summoned a Ruler class in general. I mean Darnic’s actions in that war were definitely violations. He brought an army and outright stole the grail! Of course so many things are still unknown. Why is he still there? How does he plan to save mankind using the grail and what does that salvation entail?

If nothing else it was pretty fun seeing all the servants having to work together. All these characters have shown what they can do through the previous episodes and here we saw them having to cooperate. It does make Vlad out to be a bit too powerful though. I mean he’s one servant and all of these guys could barely even keep him contained. Maybe it’s just the natural OP quality of vampires. He went down insanely easy when his weaknesses were targeted. I’m glad though to see heroes…acting like heroes. We’ve seen a lot of heroic spirits really being shaky in terms of earning that title. This time we saw people who realized the danger Vlad posed to the Earth in general and stood up to stop him before things got out of control. 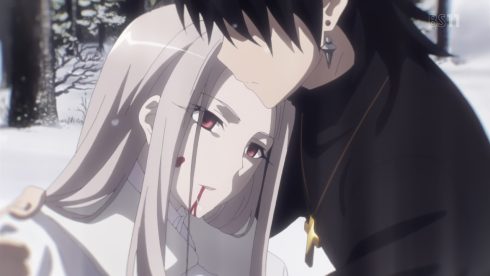 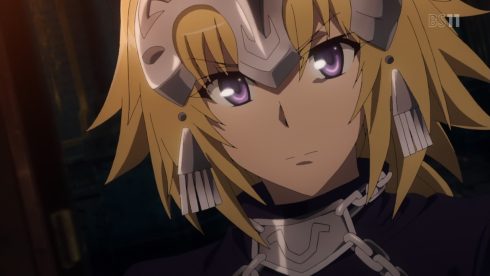 This was a big episode. It felt like the proper mid-point for the season. Unfortunately it sounds like we’ve got a recap episode coming next week. I really can’t stand re-cap episodes. No one who is watching the show needs a recap at this point. It isn’t that hard to follow what has happened over the past 12 weeks. And it isn’t like a recap is going to help people who haven’t been watching the show either. Oh well, these things just exist and we’ll just have to wait for episode 13. At least this was an action packed episode that was fun to watch. I liked seeing these characters cooperate and I felt bad for Vlad. He’d rather go down fighting than being turned into that monster. Instead he basically gets his body stolen from him and dies in a sad manner.