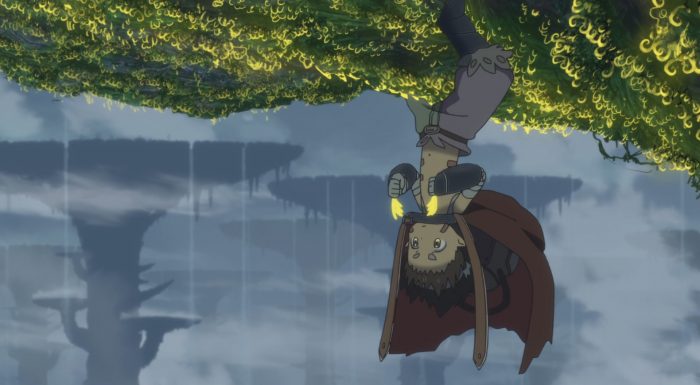 Wow … even though this was definitely a more laid back episode in terms of new content, it was packed with all kinds of new information. Most of it is centered around Nanachi, yes, but it directly impacts the journey Riko and Reg are on, and some of the things they are heading towards. All of these things are sort of sprinkled here and there between the main narrative going forward of Nanachi and Reg working together to help cure Riko’s being poisoned by the orbed piercer last episode. (I wonder if all of those black and white whistles and delving equipment hanging on the inside of Nanachi’s house are also the remains of other delvers killed by that thing and whether or no those stones in Nanachi’s back yard are in fact the graves of those whistles?) 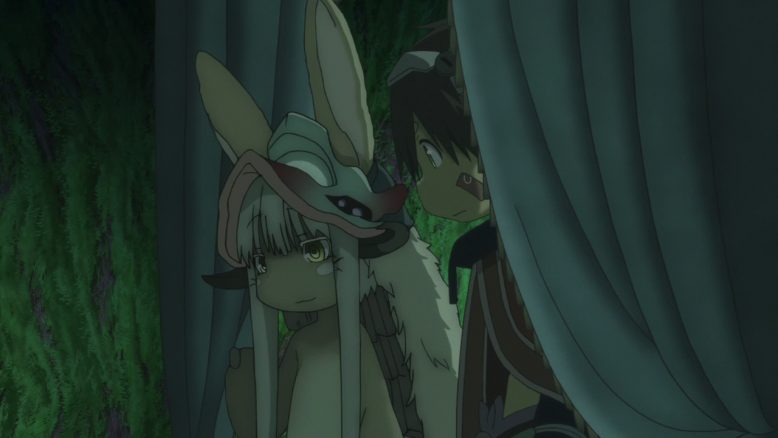 The information is primarily related to some of the things that happen in relation to the sixth layer of the Abyss – when a human being tries to attempt to ascend from the sixth layer (known as “The Capital of the Unreturned”) they confront the “curse of the Abyss” for that layer and it results in devastating bodily alterations that result in the loss of humanity and sometimes death. The creatures that come about as a result of the curse are known as “Hollows”, and for those who remember Nanachi said she was one of them. Well, in this week’s episode we discover that there is another more “standard” Hollow living with Nanachi that she seems to care for. In the briefest of flashbacks we see that this other hollow used to be a human, and is named “Mitty”. 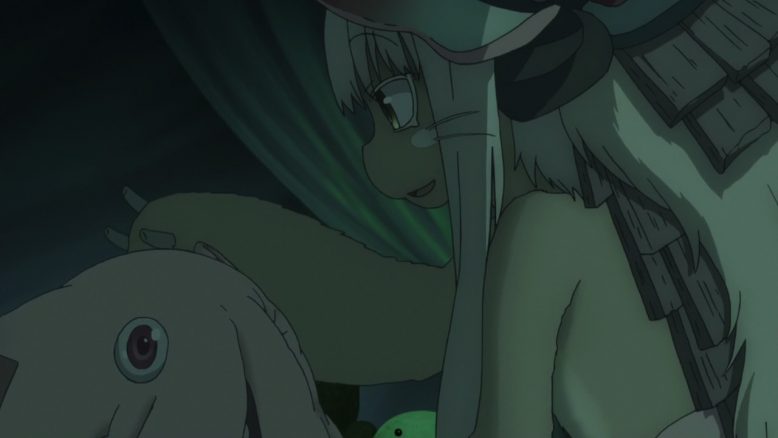 We also discover something else, and that is that apparently Nanachi had interactions with one of the White Whistles in the past – with Bondrewd, one of the Whistles who lives on the Fifth level. (We have not heard much about the Fifth Level, known as “The Sea of Corpses”, other than the fact that some of the White Whistles live there, the fact that it is actually a “Sea” – a huge body of water, and that there supposedly exists a “cryptic device” that can traverse the sea somehow.) Bondrewd in particular was marked by Ozen in her discussions with Reg and Riko back in episode 8 as “an out and out scoundrel”. In Nanachi’s flashback regarding Bondrewd the latter is speaking with her and expressing gratitude for helping him discover something … it is possible that the discovery was related to why she does not look like Mitty? 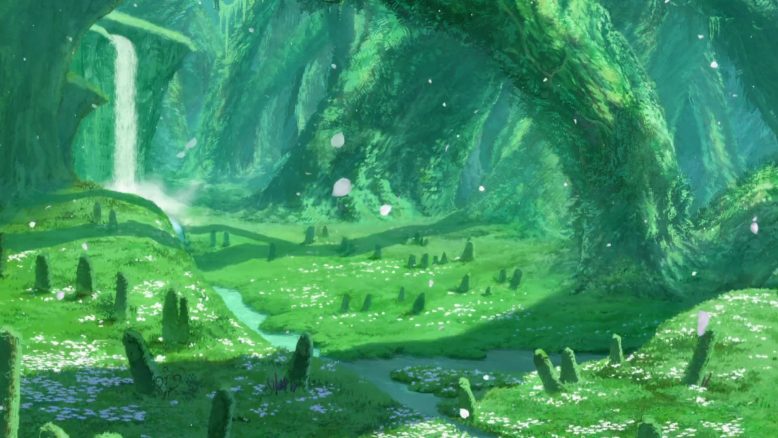 In the midst of all these sprinklings of information about possibilities along the road to come another thread of the story line arises unexpectedly in relation to Reg and his previous (mostly forgotten for some reason) interactions with Lyza, Riko’s mother. The fourth layer of the Abyss, as we have seen, is very dense with all sorts of plant life and lots of water, so in a way it is not surprising to see such incredible lush, carpeted rolling layers of moss and grass and green and even flowers towards the outskirts of the layer where Nanachi’s dwelling is. When Reg heads into Nanachi’s “back yard” he suddenly experiences a flashback of snatches of some kind of conversation he had with Lyza, and even catches a glimpse of what was presumably Lyza’s grave, marked by Blaze Reaper being stuck therein (this was before that weapon/tool was retrieved by Ozen). Once again we are reminded of another element of the story that has as of yet been unresolved. 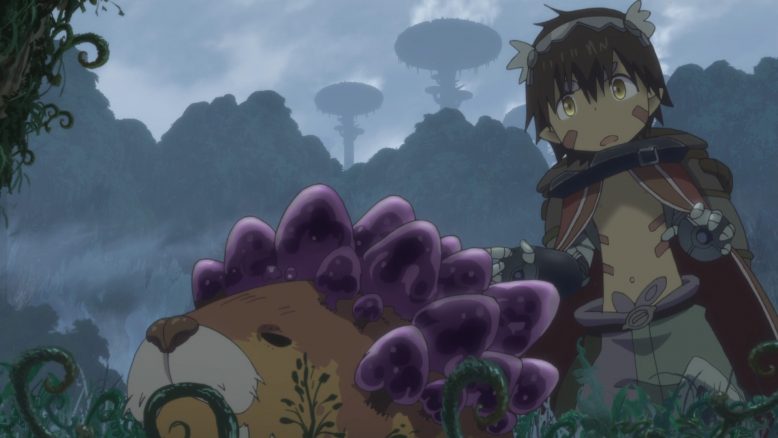 As a gorgeous and kinda fascinating aside in the episode Nanachi sends Reg out to gather ingredients for curing Riko (and for dinner too – Nanachi has a sneaky, impish, “muwahaha” side to her personality) and we get to see more of the natural beauty of level four of the Abyss: “The Cup of the Giants”. We see a few creatures, like the weird large beaver looking thing with the purple parasitic mushrooms that grow on its back. We also come across fish, and birds, and we also see some different varieties of plants as well. We also get to see Reg traveling from “Cup” to “Cup” again and even climbing the undersides of the colossal “stems” of these water holding plant caps, all guided and directed by Nanachi’s map and away from where the orbed piercer seems to have it’s territory. 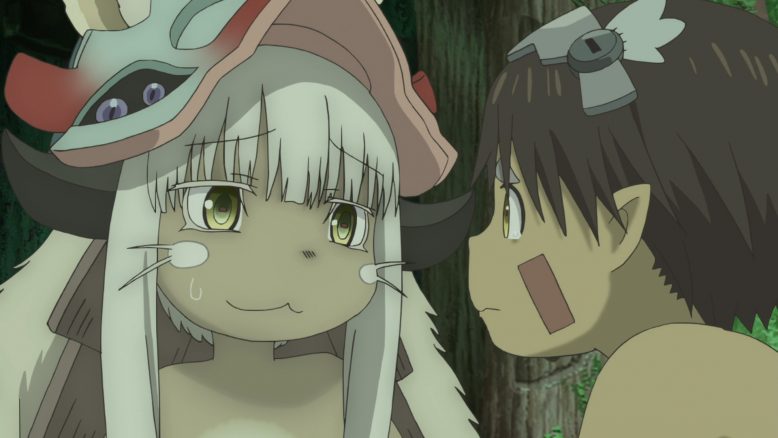 Next week’s episode is carrying the title “The Nature of the Curse”, and it looks like we will finally get some answers (presumably via Nanachi?) on that front – for some reason Nanachi seems awfully well informed about the Abyss, and likely this is in part because she also is quite smart and savvy, though I wonder if her being around Bondrewd had something to do with it? (Just as Ozen passed on some information about the Abyss to Reg and Riko some episodes back.) And then after that we will finally wrap things up with the double length episode. I … am honestly still not quite sure where the series is going to end narrative wise due to where things stand now, but once again it could easily, easily go for another cour. Split cour? Anyone? Please? XD