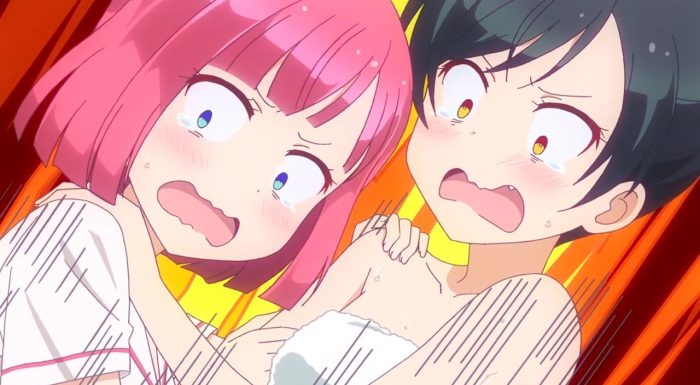 These two episodes feel similar in some ways, both beginning with a segment focusing on the established Eagle Jump characters before spending the second half of the episode giving us a better view of the two newcomers to the company. That is definitely something we need, since there is plenty that can be missed from first impressions. 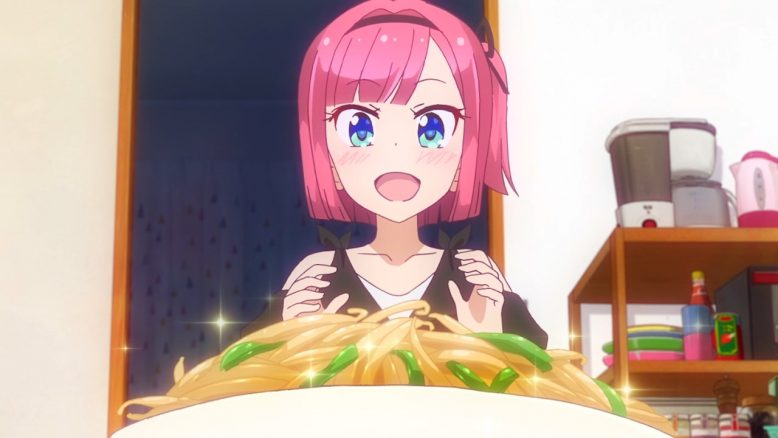 Hazuki’s little descent into maid cafe roleplaying is certainly trademark Hazuki, although dragging everyone away from work and dressing them in full costumes for her enjoyment may be overkill even for her. Still, it’s within the realm of the sexual harassment we expect from her, so it doesn’t feel off. Roping in Momo who isn’t used to her is something else again, though. That said, it’s hard to tell how Momo even feels about the whole experience. Aside from getting her competitive spirit riled up when Aoba tells her she doesn’t need to participate, she seems almost completely unperturbed by it. Unusually stoic, even for her. 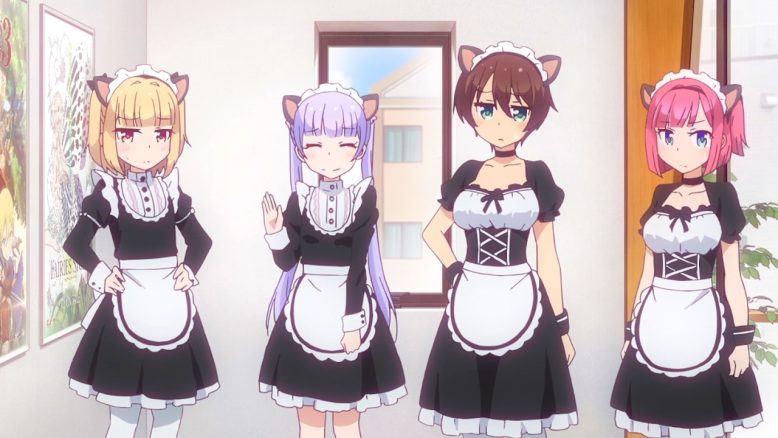 Her reactions at the newcomer greeting party, and afterwards, make more sense to me. I can understand having trouble talking to people, and thus just staying quiet. Getting a conversation going, or even participating in one when you don’t feel like you having anything to contribute, is hard, at least for some of us. Thus she mostly stays quiet. As for everyone’s name, I’m right there with her again. Remembering names isn’t easy, especially if you need to learn a bunch at once. And, of course, her embarrassment at having messed up Aoba’s name last time only makes it worse. As it is Momo mostly makes sense to me as a serious girl who isn’t good with social situations, but isn’t exactly shy in the same way that Hifumi is. I think she mostly looks at things from a straightforward perspective, which makes it easy for her to handle assignments that she can complete simply by following instructions, but very difficult to deal with social interactions, where there is no clear guide to get from start to finish. 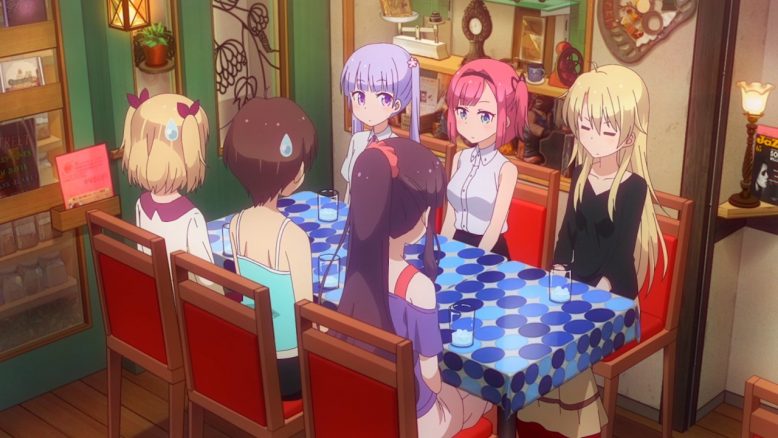 What I don’t quite get is her attempt at forming a rivalry with Aoba. But then, I don’t really understand the sort of people who insist on forming rivalries with people in anime and manga in the first place. I could kind of get if the person was arrogant and/or kind of a jerk: then it would make sense to me to have a desire to knock them down a few pegs. But simply declaring rivalry with someone who is doing better then you or has accomplished something you haven’t doesn’t seem good for long term mental health. Or physical health, for that matter. It tends to result in a lot of frustration and pent up emotions, which aren’t very good for anyone. And Aoba is just working. There’s nothing Momo can do to beat her, no matter what she might want. Even assuming Momo eventually hires on to the company full time, her only real hope will be to do what Aoba did: win a character design competition for the next game, and build herself out from there. But that sort of thing would still likely be at least a year away, and until then she’s just getting herself worked up for nothing. 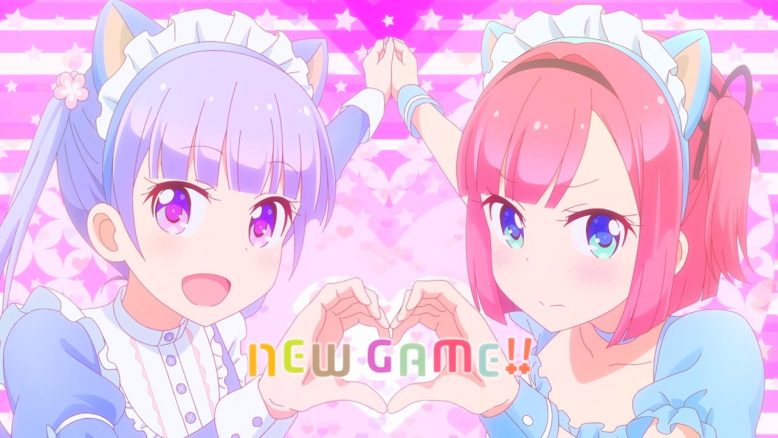 This beginning segment is really nice, shining a light on Hajime and Yun’s lives prior to joining Eagle Jump. Certainly we’ve known some basics about them for a while, but understanding who they were helps us gain a better picture of who they are. I admit, when I first read the chapter this part of the episode came from, I was pretty surprised. Learning that Hajime hid her otaku interests in high school and hung out with a group of pretty, popular, fashionable girls was not at all what I expected from her. She looked really lovely with long hair, too. And Yun as the plain-looking girl with the swirly-eyed nerd glasses (where do people even get those things?) was a shock as well. But when it comes down to it, despite seeming to have gone in opposite directions, the two of them really changed in pretty similar ways. They both left high school and decided to not be held down by the expectations and images people had had of them before, but instead to become the sort of people they wanted to be. For Hajime that meant abandoning the fashion she’d adopted solely to please her friends, and accepting her tastes in entertainment openly; while Yun adopted complex fashion which was a delight for her, and became more bright and outgoing. Even though they both changed in opposite ways from each other neither of them was wrong in doing so, because the changes were made in their attempts to become the sort of person they wanted to be. 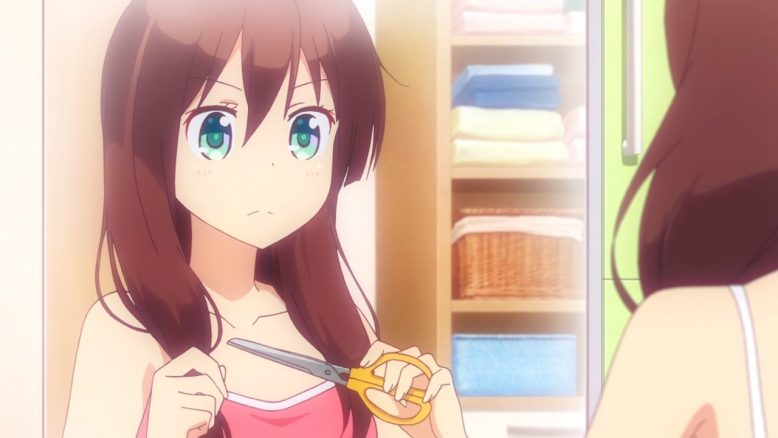 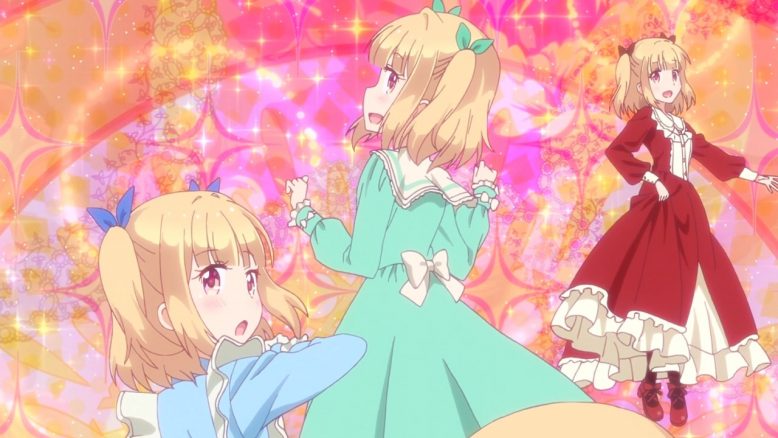 The second segment of this episode has garnered a lot of negative responses. It’s pretty astonishing how quickly people are rushing to Nene’s defense these days, when I remember that a fairly large segment of the viewers didn’t really like her in season 1. But throughout season 2 we’ve been watching her character develop and grow, following a journey many of whose steps we’ve taken with her. Nene has earned her place in the hearts of the viewers, and when Naru tears a strip off her in this episode it isn’t a new character attacking someone we don’t care about, but rather a new character unjustly lashing out at someone who has become beloved to us. And the fandom has risen up in rage as a result. 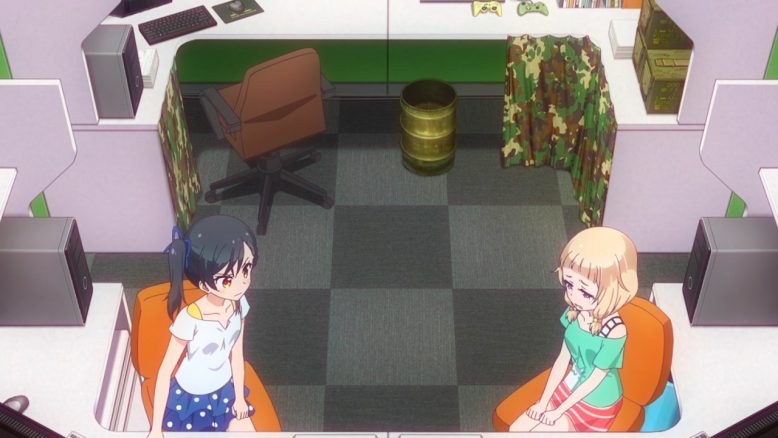 For myself, I tried to listen closely to what was both said and not said in that conversation, and I reacted somewhat different. While it’s true that what Naru says is unjust and untrue, she doesn’t know that, because Nene does a terrible job of explaining the situation to her, and in doing so manages to somehow hit upon something very personal for Naru. Listening to Naru’s voice when she’s tearing into Nene, I can hear it wavering slightly. This isn’t just disgust or frustration: she is genuinely upset. I think she took Nene’s lighthearted attitude as a personal attack on her dream. It is pretty clear that she’s misunderstanding the situation, due to Nene not giving her anywhere near enough information. We know that Nene can work very hard and learn very fast when she’s properly motivated, and Umiko is counting on that to turn her into a net asset to the company, even though she’s starting off as a deficit. But all Naru heard was “I don’t really have a dream, but yours sounds nice, maybe I’ll try doing that. I hadn’t really considered programming, but Umiko bent the rules to get me in, so here I am.” To Naru that must have sounded like Nene was insulting all the genuine emotion she had for her dream, and all the years of work and study Naru had spent just to get to where she is now. 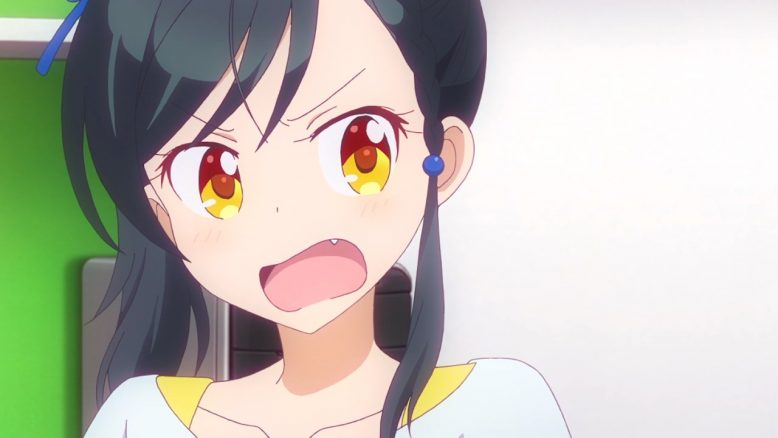 I don’t necessarily believe that justifies Naru turning on Nene like she did, but I do believe that explains why she would do so. Sometimes people react emotionally to things even when it isn’t particularly smart or wise or even correct to do so. I do not personally think this has ruined Naru’s character; at least not for me. Misunderstandings can be resolved. Mistakes can be smoothed over. Naru can still learn and grow from this into someone who feels like she belongs here. I have faith that the author will set things right. 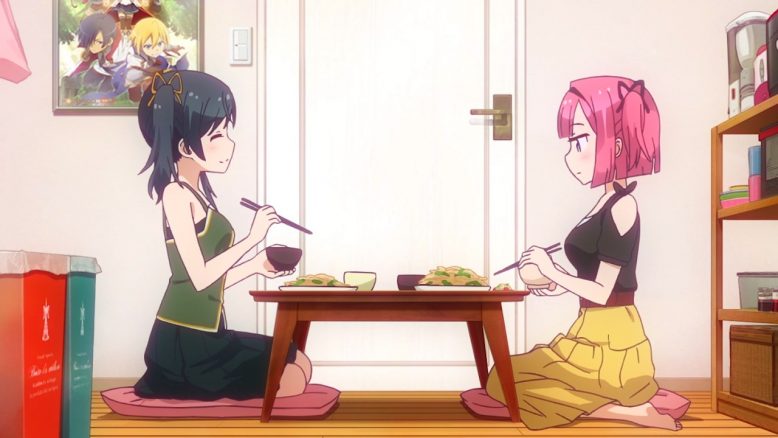 Thus we have episodes 8 and 9, learning more about Momo and Naru, in some cases not entirely for the better. It isn’t pleasant seeing a character I like get hurt like Nene did, but I have faith that things can still turn out for the better. I would like to take a moment to apologize for running so late with these two episodes: some life-stuff came up that took me away from being able to get them done the way I normally do. Anyway, I hope you’re all still watching, and I’m eager to see where things go from here. 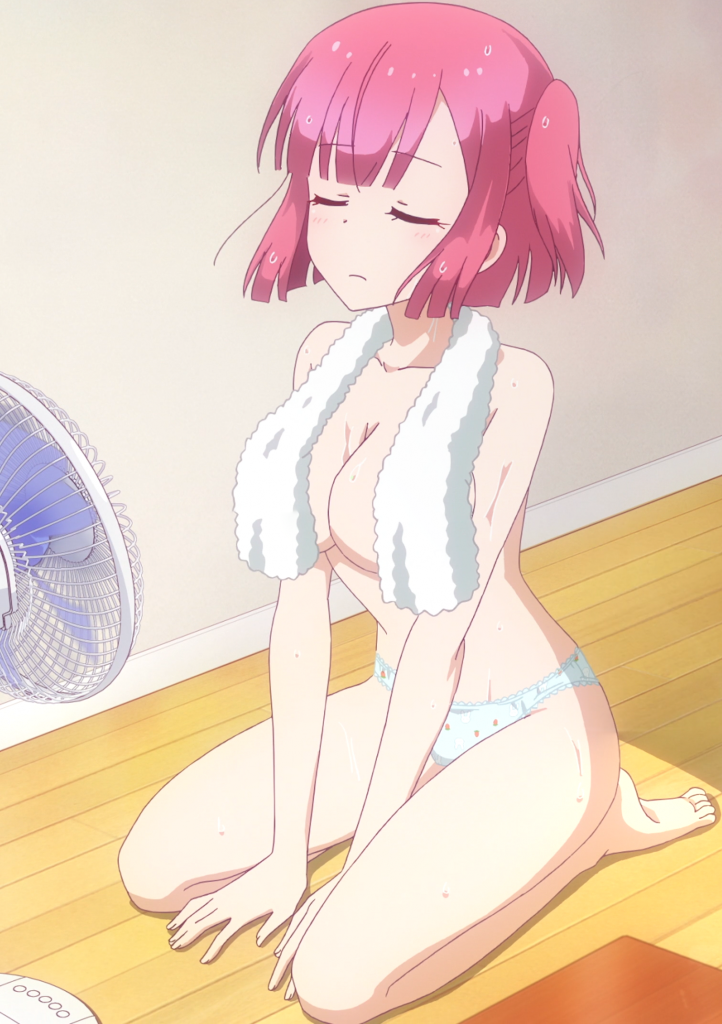 Have a bonus stitch of some Momo fanservice. Just so you don’t think I forgot about it. 😉