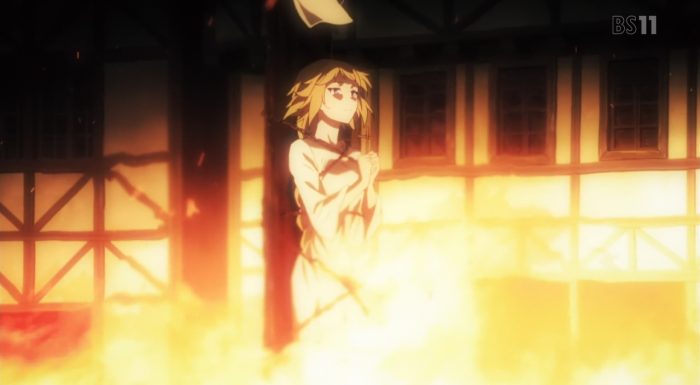 It is kind of interesting that despite so much focus in the OP/ED (mostly ED) being on Ruler that she still has had very little screen time in the first couple episodes. We only really had her appearance at the end of the last one and now we got a bit of focus on her backstory in this episode. Although I think most have a generic understanding of her story. Few Saints called Jeanne. Still, it isn’t a bad idea to make clear that this has to be Joan of Arc. The young woman, who followed the voice of God, went to the battlefield for her country, was betrayed and then burned at the stake by the English. Though in the long run the church canonized her as a Saint and remains a well-known figure. The reality as we saw in the flashback was pretty horrible though. 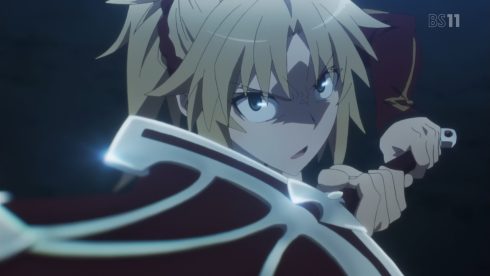 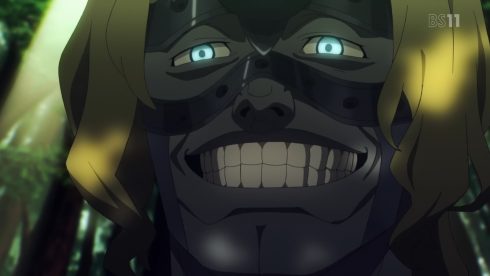 Though I suppose the lack of direct focus on her will change pretty significantly going forward. The priest sending Red Lancer/Karna to basically assassinate her is going to change things up. I mean this definitely makes clear that few people in this war are objectively decent. I suppose this also confirms that you just can’t trust a Kotomine. I’m openly approaching this as someone who has seen several Fate anime, so there is that basic knowledge I’m running with. I’m not sure if the LN author was messing with people when he named this guy Kotomine Shiro or what. Either way it is weird to have the name Shiro and Kotomine connected. Anyways I don’t trust this guy and I can respect Sisigo/Mordred for keeping their distance. Both Kotomine and his servant seem to have their own plans here.

Maybe this is just a case of having the larger picture in mind. They might be preparing to not only take down the Black Faction, but also gain a massive lead in winning the Holy Grail War that will follow. But that doesn’t explain why they are trying to assassinate what appears to be a neutral party. Is what they are planning so extreme that Jeanne will have to intervene against the Red Faction? Either way I don’t like this. The focus should be on their specific war, not pissing off what sounds like a referee. I’m sure the creepy atmosphere of the assassination order doesn’t at all influence my opinion or that Jeanne seems to be a lovely and likable person…Just saying this seems very shady. 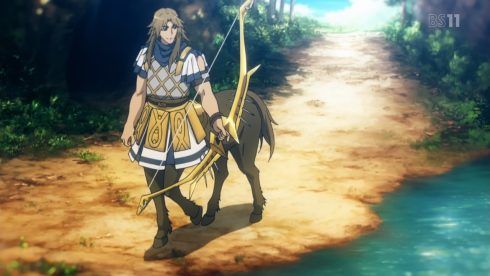 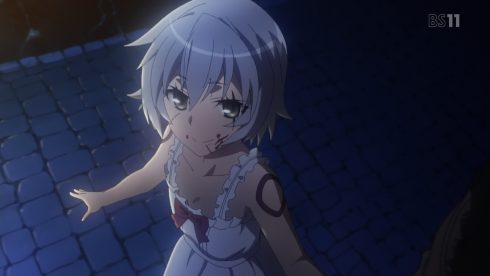 Though talk about the show just getting all the true name stuff out of the way early. There is almost no one that we don’t have a confirmed identity for any longer. The Black side is fully revealed; Saber (Siegfried), Rider (Astolfo), Archer (Chiron), Berserker (Frankenstein’s Monster), Assassin (Jack the Ripper), Caster (Avicebron), and lastly by default Lancer (Vlad the Impaler). They have quite the group, although I feel like this isn’t the most overwhelming squad. Though it doesn’t help that we haven’t seen what most of them can do. But their Berserker literally has a limit on her noble phantasm. Haven’t seen many cases where a servant will be fairly damaged by using their own noble phantasm at full power. Mordred didn’t have a tough time wiping out those golems either. Their Ace may be Vlad though. Summoned in a place where he’d be at his most powerful.

They haven’t completely revealed the Red Faction, but we’re mostly there; Saber (Mordred), Caster (Shakespeare), Assassin (Semiramis), Berserker (Spartacus), and Karna. I don’t believe we know anything about the other two yet. But still that’s basically everyone covered now. Hard to judge this group since we don’t even have a full roster determined yet. Can’t say I ever expected to see Shakespeare as a servant and thus I have no idea how strong of a Caster he is. We can tell that Mordred is pretty badass which is a positive for them. Spartacus…is weird. Karna seems pretty awesome from doing a little research. He’s a major character in a Hindu epic and a warrior who in that story conquered the whole darn world. Too bad he’s busy being used to assassinate a neutral party… Semiramis was a legendary wife who took the throne of Assyria.

There are some interesting choices made in this one. I mean Jack the Ripper is this weird kid. That this is a girl isn’t all that surprising, we’re talking about the Fate Universe here. Although I think this is more acceptable than most times since Jack the Ripper is such an unknown. There are many theories, but we’ll never really know who this person was. I’m curious about the background they will be going with. I think the creepiest thing though is how they are killing a lot of people because….she is hungry. But there is a lot of weirdness going on with the Black Faction. Astolfo’s Master is…a crazy sadist. Seriously who thought someone that mentally unstable was a good choice for a Master in this important war that decades had been spent preparing for? At least Archer’s Master seems pretty stable. 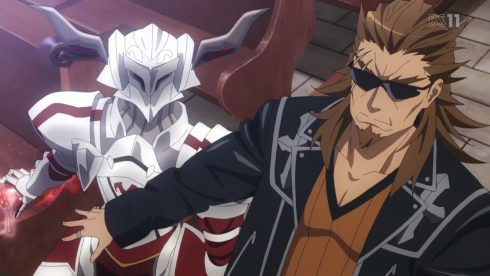 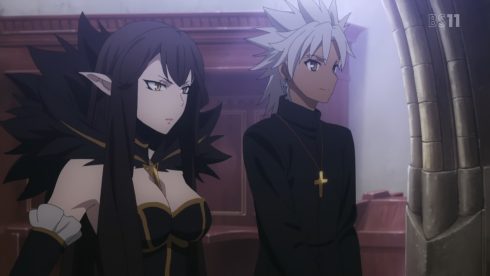 I did really enjoy the fight Mordred and Sisigo showed off at the end here. I can’t help wondering why Mordred is such a bundle of contradictions. She is extremely pissed about her gender being mentioned and yet doesn’t remotely go for gender neutral clothing when purchasing an outfit. To say she’s a bit of a hot-head would be putting it lightly. I feel like Sisigo will be spending a lot of time keeping her from doing something crazy and keeping himself safe from an outburst…At the same time though I do respect her abilities and stance on her wish. It isn’t as if she wants the grail to hand her the throne of England, she just wants the chance to pull the sword from the stone. Of course she totally believes she will be able to do it, but that’s a respectable wish.

The action was pretty darn good and shows how these two are a great team. Sisigo really showed how he really is a necromancer. I’m pretty sure he was firing bullets that were actually human fingertips and he threw a poison gas grenade….made of a human heart. This isn’t a guy remotely hesitant about getting dirty. Sure maybe he really doesn’t see homunculi as human (which would be the same as the Black Faction really), but I could see him not caring either way. Mordred as well is pretty flexible with her fighting style. Punching, kicking, sword throwing, it is all fair game. She just wants to win and that kind of practicality might keep her alive through most of this war. In the end I’ll be adding the latest Fate series to my blogging list for the Summer. This show has much to talk about and will be entertaining. 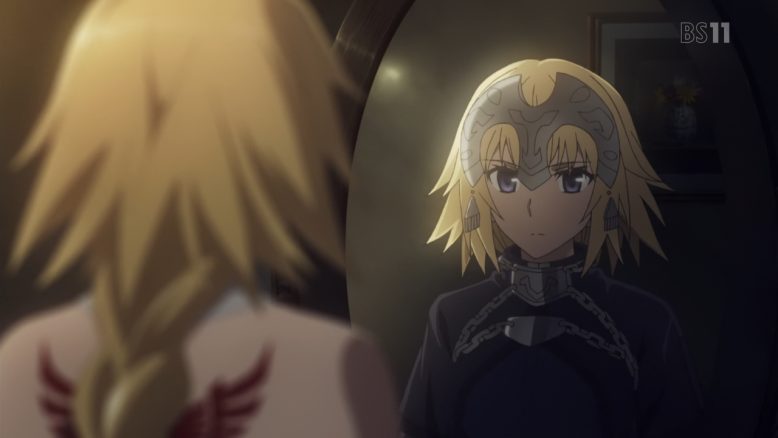 Not a lot to say about the OP. I do think the performance is good, but the song just doesn’t work for me. Certainly the softer portions kind of reflect the early going of the show. A build up to what is probably going to be a pretty chaotic conflict. A visually dynamic OP, especially when things get going. And I could see why many would like it. Just that the musical style or the song itself just didn’t work for me. Not a big deal though, it could grow on me as we go along. 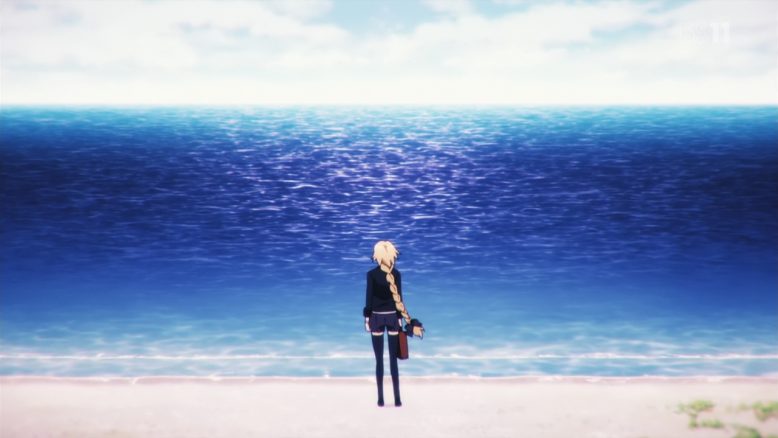 The ED is pretty darn Jeanne focused. There is an interesting dynamic between Jeanne the warrior and basically an identical girl who is living a normal life. I’m still not sure what exactly is going on there. The Ruler Class is such a new factor compared to previous Fate anime that anything could be at work here. And yeah…they definitely fit some fanservice in there. I did like the song overall though. Not the best song I’ve heard this season for an ED, but pretty good.