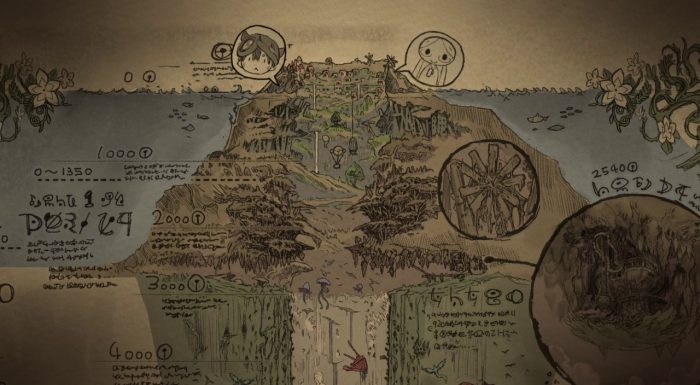 Without a doubt this series was one of the most anticipated of the Summer 2017 season for me. I have been following the manga for some time now, and it is quite an engaging story.  When the announcement for the anime adaptation came out some time ago I was quite glad, but I immediately began to wonder what material the studio would choose to adapt. You see, this story is dark … and at times it can get really dark. After the announcement when those who had read the source manga were answering requests of describing what the series was about and/or what other series could serve as a reference point for the story one of the reference points was the recent Black Bullet series. Another description (a good combo of tongue in cheek but also surprisingly on point in some ways) is that the story was like a combination of Ichigo Marshmallow and Beserk. 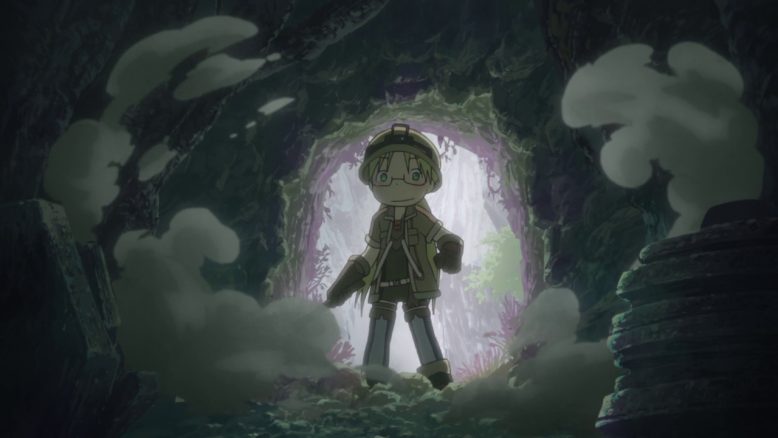 After seeing the first episode, though, I think there is a pretty good set of parameters in place here for what to expect from this cour, though I would not be surprised if the series would periodically permit itself to be more graphic in particular ways. Really there is little to complain about in my opinion (although admittedly it is an opinion already formed on the source manga). The visuals (both art and animation), the OST, the VA work, the manner of presentation … all of it was quite good, and adopted a “show don’t describe” method which worked well. This immersive experience pulled viewers in and leaves them intrigued and wanting to know more. I can’t tell you how many times I came across first time viewers saying things like: “That was really good! But I have lots of questions; what about ___ and ___?” 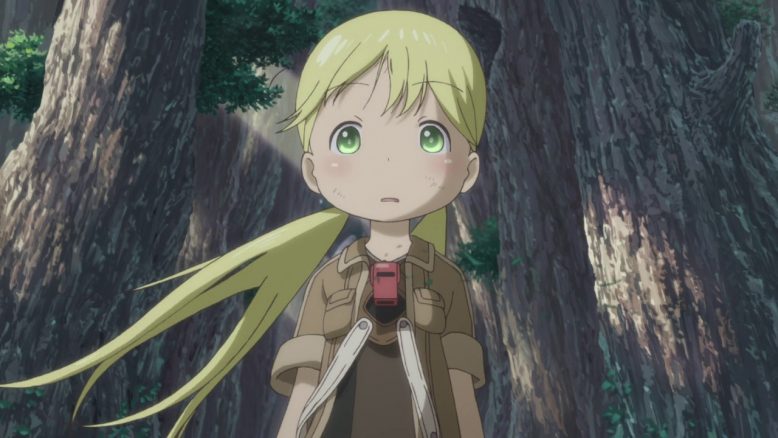 The story itself is a post-apocalyptic type of setting, one not necessarily fantasy’ish (no knights and wizards or elves or what not), but one that is definitely science fiction’ish (there are robots and giant Lovecraftian style monsters here, for example). The setting itself is on a large island in the shape of an enormous dormant volcano or crater, and around the top of the volcano’s edge there is a densely populated city called Orth. The city was founded because the throat of the volcano plunges downward seemingly endlessly, and scattered all throughout the various layers or levels or what have you of this drop (known as “the Abyss”) there are remains and remnants of previous civilizations and even technologies. The Abyss is spelunked by specially trained inhabitants of the city (of all ages) known as “whistles” and the treasures brought back are sold. The main character of the story is a young girl named Riko who is an orphan, and the orphanage she lives in is apparently filled especially with children whose parents were whistles and who were killed or lost or the like. 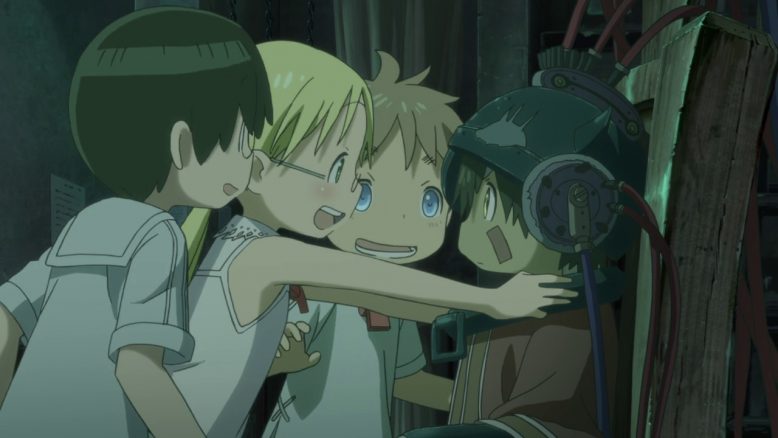 Riko is a vivacious young girl, it seems; one filled with spunk and near-insatiable curiosity with a knack for getting into scrapes – sometimes acting before she thinks. This becomes very clear in the opening scenes of the first episode when she and a fellow orphan named Nat are on a delving mission to bring back treasure and remnants from the uppermost levels of the Abyss (there are different levels one is permitted to delve in and the color of one’s whistle is a sort of sign for how deep one is permitted to go – the further down one goes the more dangerous and deadly it gets). She and Nat unexpectedly come across one of the many deadly monsters that makes their home in the Abyss, a flying creature that is sort of like a cross between a snake and a manta ray and is called a “crimson splitjaw”. 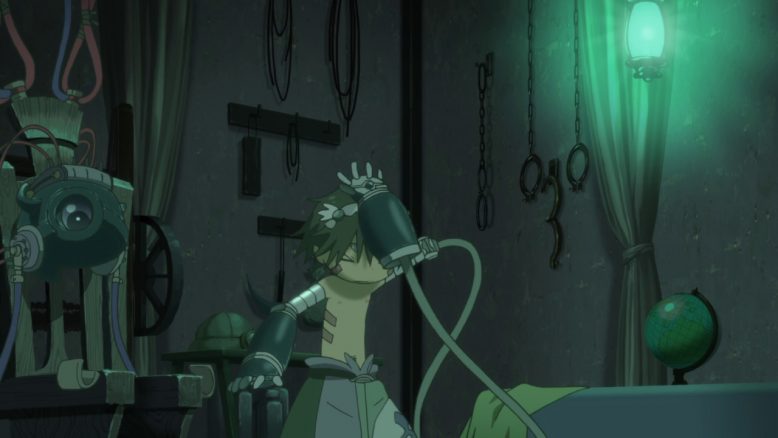 After Riko is pursued by it she is saved at the last minute in a very dramatic way by what looks like a young boy her age but turns out to be a highly advanced robot. A robot of that sort would be considered a treasure beyond price; the rarest of the rare. Riko knows this, and brings the robot (who apparently fell unconscious after firing some kind of beam like weapon out of it’s palm to drive off the crimson splitjaw and save Riko) back to the orphanage secretly. After forcibly waking the robot up by coursing so much electricity through it it causes a blackout throughout the entire orphanage she befriends it and decides to name it “Reg” after a dog she used to own.  From then on Riko and Reg’s story will begin to take shape…. 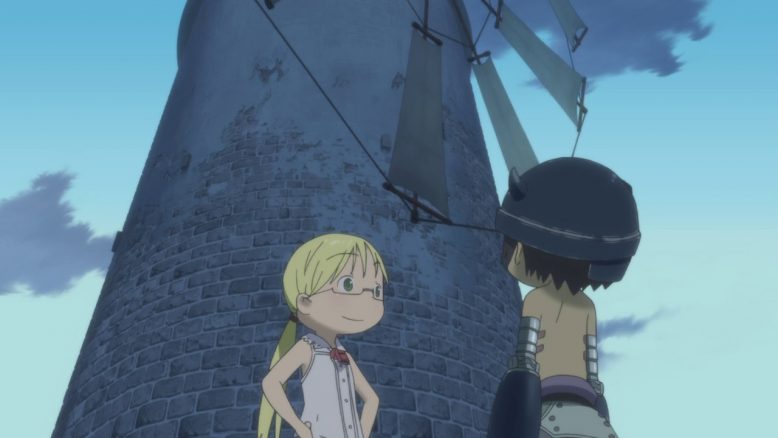 Once again, I was quite impressed by the skill and effort job the studio (Kinema Citrus) put into the premier episode of this story – I know from the source manga where things will go, and that it will get quite dark and am looking forward to see how it will continue to be presented. Often for anime adaptations like this the source material remains more engaging for me, though once in a blue moon an anime comes around that surpasses the source material proper (if this is able to do that I think it may be one of the best series of the year for me).

Of course it is still way too early to guess or evaluate anything along those lines for me, but hey – I would love to see the series blossom to that degree! For me I think I would give the first episode of the series a B+ rating. It was very well done on almost every front, and I look forward to future eps. I suppose it is still possible I could pick this series up to blog (am waiting for the premiers of two other series tomorrow at the moment), but we will just have to see where things go! ^^