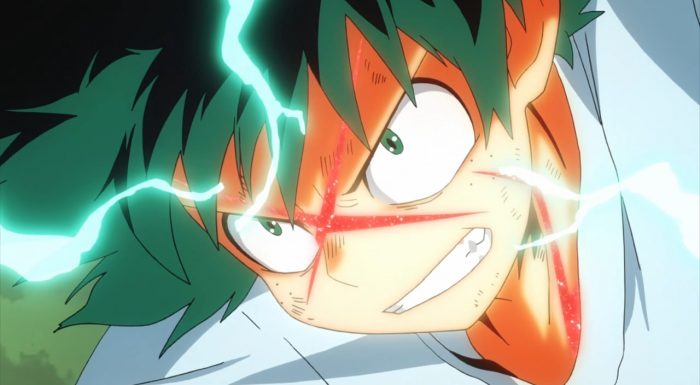 This episode definitely was important for pushing forward Deku’s development as a hero. He did need someone as crafty and rational as Gran Torino to help him take a big step forward. It is true that for someone like All Might that took to One for All naturally, teaching isn’t necessarily easy. He could help Deku with a lot of things and has to this point. But sometimes you need someone with a better method of teaching. If nothing else Gran Torino has clearly seen multiple generations of One for All users. That level of experience and knowledge does give him an edge in tailoring a method of teaching more suitable for Deku. That was a pretty effective job done by him in getting Deku to change his mindset. Sometimes all you need is a fresh perspective to jolt things forward. 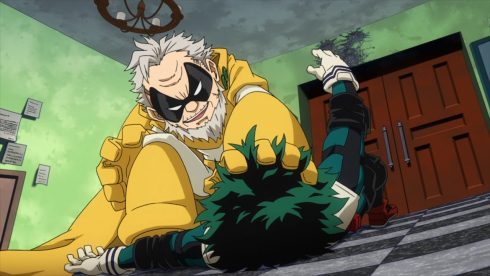 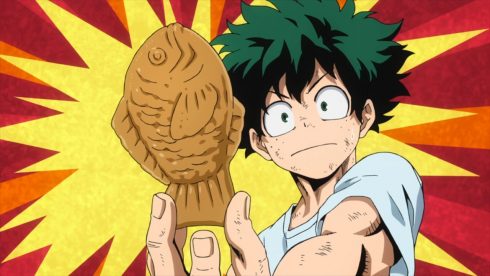 I also like that everything isn’t resolved in this one episode. Deku has taken steps forward, but he isn’t nearly done yet. He’s basically covering for the fact that he isn’t used to treating One for All as part of himself. By using it all across his body at once he gets rid of the time lag problem. There’s no need to wait and activate One for All exactly where he needs it. Rather he can simply use it to the highest level that is safe for his body and do that for the whole thing. If he can move and function in that state it will be a massive step forward. It should limit his need to turn to the 100% smash if he can dodge and attack with 5%. Of course the key will be when he can naturally use the quirk like Bakugo and his classmates.

Gran Torino is completely on point with Deku’s mindset. For him this is a gift he’s been given by his greatest idol. He holds All Might and One for All in a special position. For Deku he feels like this quirk is a special tool he uses. But the idea of it being something separate from him creates a time lag as he makes the decision to ‘use’ it. He has to treat it as simply a quirk and one that is part of his body. That isn’t easy though. Even harder might be stepping back and being objective. Looking up to someone can be useful, but it can also blind you a bit. But that is hard to avoid when All Might is the only One for All user that Deku can refer to. Since at this point All Might hasn’t talked about the predecessors. 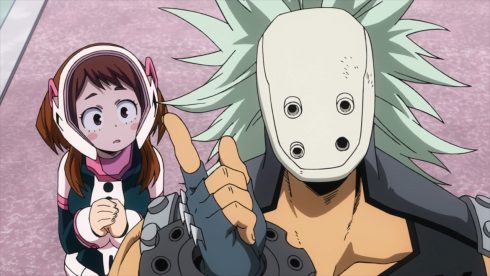 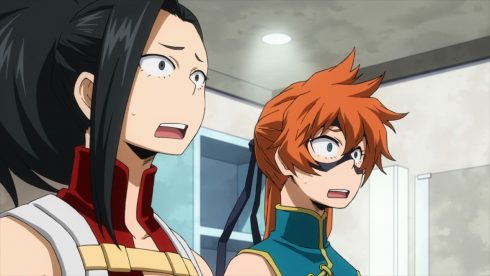 The issue of predecessors is an important one. We know that Deku is the 9th user of this quirk. What is curious though is why All Might has avoided talking about that. That the predecessor is dead is noteworthy. But did something really traumatic happen? Well we may or may not find out soon enough on that front. For now Deku is working with Gran Torino and won’t be heading back to UA for a bit. And that is true for the rest of his class. What we can say for sure is that Gran Torino is the proper “Yoda” figure that Deku needed right now. Someone who knows a lot of information and is potentially in a position to reveal more to Deku if it becomes appropriate to do so.

I did find it nice to see how everyone is doing on their first couple days. No surprise, but Iida’s head is still filled with thoughts of Stain and his brother. You just hope that he won’t get into a horrible situation and get himself hurt or killed in the process. At least through all this we were getting a good breakdown of the hero system and their role in society. They are civil servants and yet pretty unusual ones. You even have types that spend their time doing very little or others that basically sell their brand via commercials. They are like star athletes in that respect and can go around being in commercials. For some public image really counts which is why Momo and Kendo were taken in by Uwabami. Already seeing Momo’s damaged self-confidence at work there. 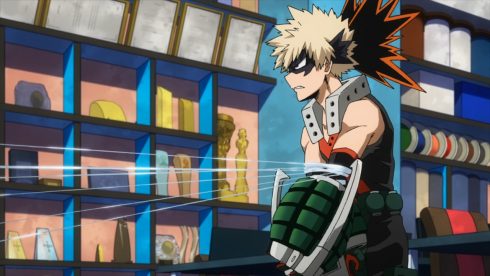 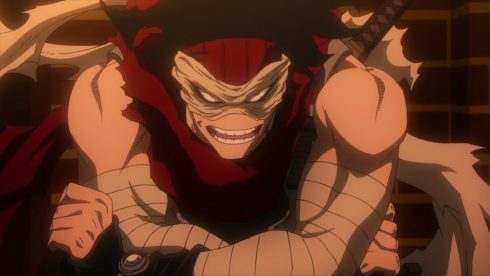 The more interesting situations for these internships are for Bakugo and Todoroki. I am surprised that Todoroki went to his father. Though maybe he’s just determined to use what he has to reach his goal. His father is a scumbag, but he is the #2 hero and that has value. It just is unlikely to be a very enjoyable internship. On the other hand Bakugo’s situation is hilarious. I’m sure he did just pick that office for the reasons speculated. Maybe he wanted to compare himself against the best and see where he currently sat. Regardless he’ll be pretty busy. I appreciate Best Jeanist’s approach with Bakugo. He is the type that needs this. Bakugo is smart and a bundle of fighting instincts, but he can’t afford to be terrifying the public. Potentially teaching him to channel that rage is good. Helping him reach the heights he seeks correctly.

In the end this was a nice way to return to Boku no Hero. We’re seeing some real growth for Deku and the various challenges facing the main cast. Not to mention we are seeing that just because people are villains doesn’t mean they will cooperate. The points of view between Shigaraki and Stain are pretty far apart. They are both doing bad things, but clearly one has a focused ideal and the other is just a big kid. It should be fun to see a clash between those two next week. Interesting views on teaching between Gran Torino and whoever is supporting Tomura. Gran Torino not giving Deku the answer and trying to spur him to grow. And this mysterious figure seems to be doing something relatively the same by introducing Stain to Tomura. Although it’s a more lethal means of teaching… 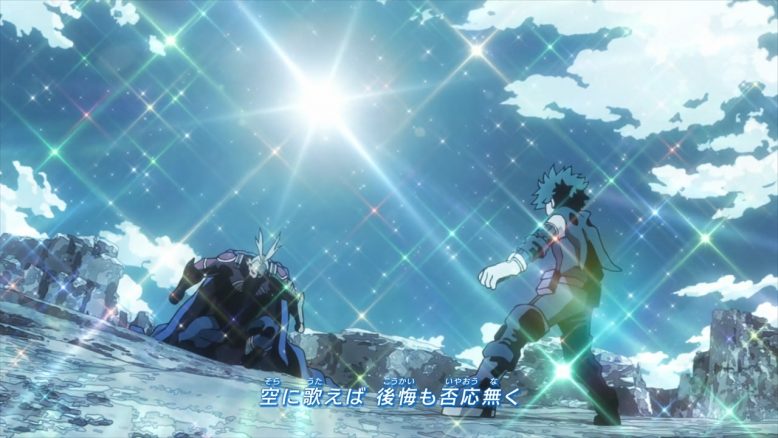 The new OP wasn’t too bad. I wasn’t immediately pulled in by it, but to be fair I liked the ones we had before so any change would be a bit jarring. It certainly has a nice style factor to it. Not to mention we get a pretty good picture of what are going to be major points of focus for this next part of the show. Things are going to get pretty intense in this next arc. No surprise to see Stain pretty prominent at points in the OP. Also hoping the OP is right and that we’ll see Todoroki willing and able to use his flames. 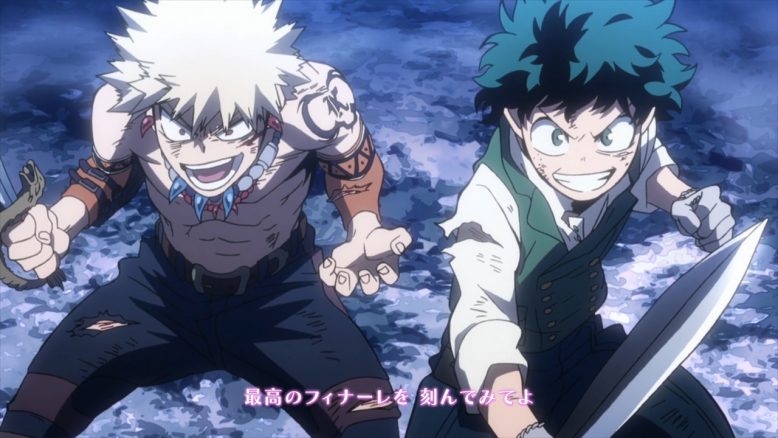 They certainly went in an interesting direction for the ED. This time just going with telling a self-contained fantasy story with the main cast. There were definitely some hilarious aspects to seeing Todoroki fighting as the prince on a white horse or Bakugo as a freaking dragon rider XD. Very silly, but pretty fun at the same time. The song itself wasn’t anything too special but it worked well enough.