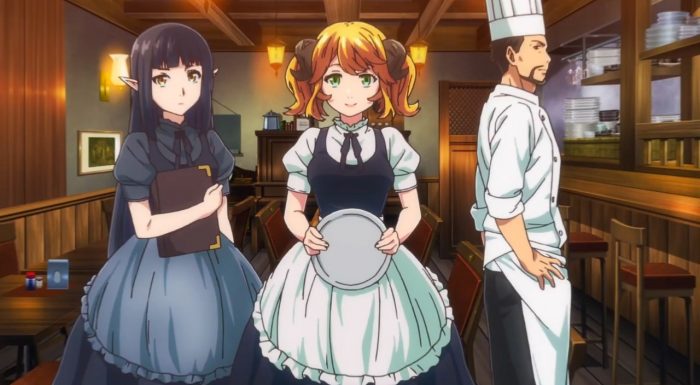 With the new season come new shows (of course), and out of the premieres we’ve had so far Isekai Shokudou, or Restaurant to Another World, definitely stands out. When I first read the description for it I wasn’t sure what I would think of it, but this first episode has definitely exceeded my expectations.

Our setting is the Western Restaurant Nekoya. A popular restaurant set on the edge of a shopping district right next a busy office district, it attracts lots of salarymen and shoppers in as regular customers. However, every Saturday the restaurant is closed… or so it appears. In fact, the truth is that on Saturdays the door to the restaurant magically appears in many different places in what appears to be a medieval-style fantasy world, and many unique customers can come in from that world and experience food unlike anything they’ve ever seen before. 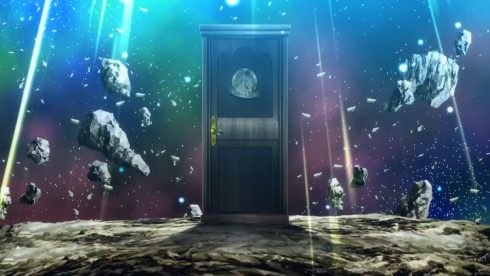 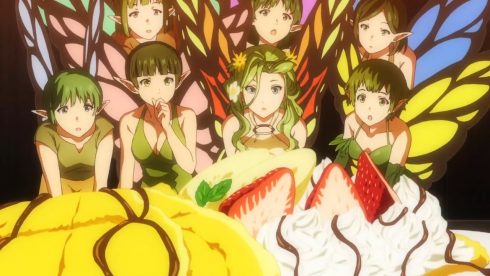 I admit, although the magic concept was a bit of a twist, I was somewhat concerned ahead of time that this would turn out to be much like some of the other food-based/cooking anime that have being showing up in recent years. Not that those aren’t necessarily good for what they are, but many of them have a habit of being… overly dramatic, shall we say, about the food they’re presenting, as well as being overly technical with the process of food preparation. Fortunately (from my perspective) Isekai Shokudou doesn’t make use of those tropes. While people enjoy the food prepared by the as of yet unnamed owner, they do so normally, in a fashion that seems both reasonable and sane. And while we do see him preparing some of the food, it’s so far only been a quick montage as he goes through some of the steps in the process: a glimpse of a few seconds to let us know that yes, he is cooking, and yes he really does know what he’s doing and is good at it. But it doesn’t dwell on that part. 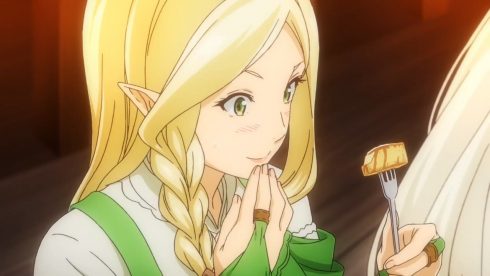 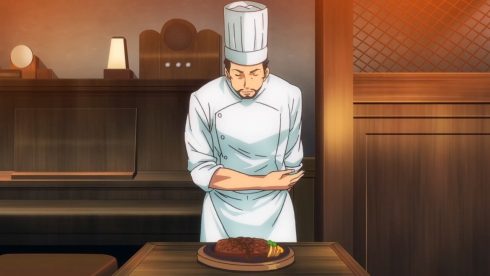 Where this show comes in strong is in the uniqueness of the various characters that come into Nekoya. From a group of slightly rowdy adventurer/former-adventurer types who get into a bit of a discussion about which of their favorite foods is better, to a red dragon queen who has agreed to come in after everyone else has left and trades gold for a pot full of beef stew, each of these characters is… well… quite a character, and their personalities, their interactions in the restaurant, and even their favorite foods, are interesting and amusing to watch. 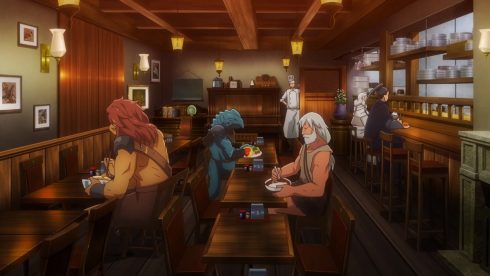 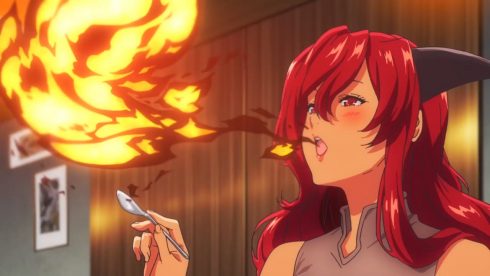 The best part of the episode comes in the second half, as we’re introduced to Aletta: a young, homeless demon girl who wanders into the restaurant late at night when the door appears in the abandoned building she’s trying to sleep in. After convincing herself that she must be dreaming, she ends up eating some corn soup that was left heating on the stove, and falling asleep in the kitchen. The owner, after waking up and walking into his kitchen to find a young girl sleeping on the floor, is surprisingly not bothered by the whole situation, and after hearing her story he simply invites her to eat breakfast with him, at no charge. 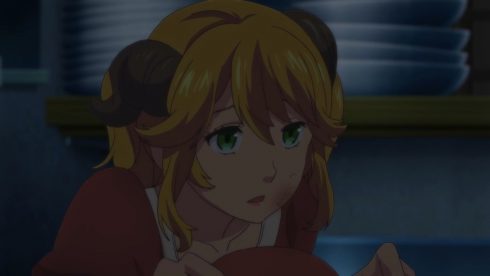 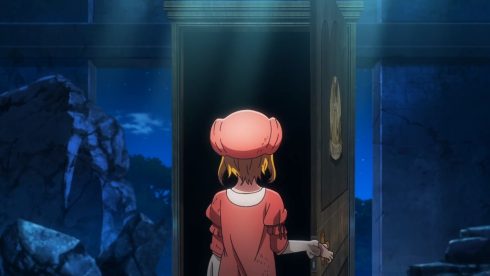 Now, I have to admit that Aletta is cuter than a button, and her story is perfectly written to make you feel sorry for her. Her story is a fairly typical writing cliche to make you sympathize with someone. However, the reason why it’s a cliche is because it genuinely happens. Also, since she doesn’t really understand how she got there, or any of the technology around her, she thinks she’s wandered into the home of a powerful magician. There are certainly folk tales of people who wander into a magician’s home in a manner much like she did, who eat some food or otherwise take something from the house, and suffer terrible consequences. Based on what little she knows, she has plenty of reason to be afraid. 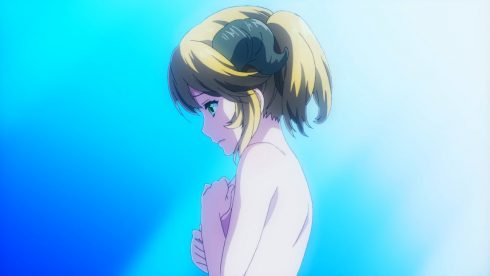 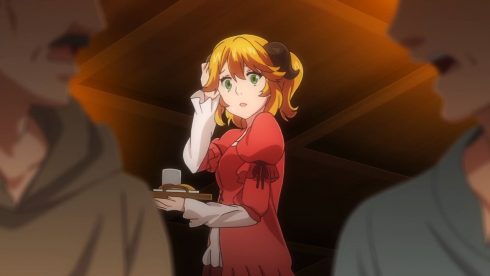 Of course, her situation is nothing so dire. After serving her breakfast, the owner offers her a job there, since she had prior experience as a waitress. Based on her reaction, I’d say that 10 silver coins doesn’t really turn out to be quite the same value as 10000 yen (about $88 USD): I get the feeling instead that he’s kind of overpaying her by her world’s standards. But hey, it’s his exchange rate to choose, and his money to pay his employees however he wants. And if he can help this girl get back on her feet, so much the better. 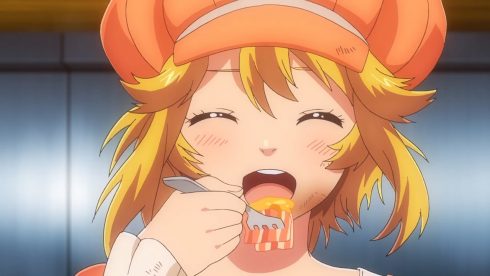 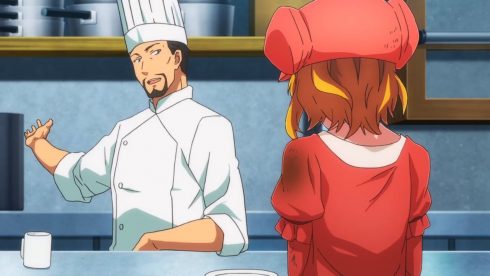 After a shower (the delight in which suggests to me that Aletta hasn’t had a chance to get herself properly clean in a while), she puts on the uniform the owner has ready for her, and he starts to show her the ropes. And here we get a surprise, as her presence in the restaurant alerts the red dragon queen we saw before, who declares to one of her servants that something new was added to her “treasure.” After Aletta returns to her world she quickly falls asleep, and moments later the shadow of the dragon flies over her, and Aletta’s body begins to glow. As the red queen flies by we hear her say not to worry: for there is no one in the world who would dare to damage a part of her treasure. This alleviates my biggest fear, as a homeless person who faces severe discrimination suddenly acquiring money when they had none before is in a fairly dangerous situation. Whether from thieves who know no one will care if they rob or kill her, from merchants who apparently would be inclined to cheat her, from corrupt guards who might decide to seize the money “on suspicion,” or from any number of other things, she could easily end up in even worse straits than she is. While I don’t know exactly how it works, I suspect the protection of the red dragon queen will keep her safe from that. 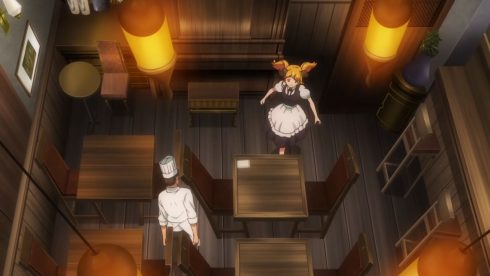 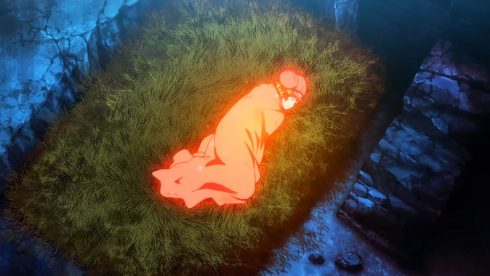 On the technical side this series looks pretty nice. There isn’t a lot of animation (it’s a show about a restaurant, not an action series), but the artwork looks quite good at times, especially when there is food on the screen. There is no question that some significant effort was spent making every dish look as delicious as possible. With that in mind I should probably warn you, this is one of those shows that is going to make you want to eat something when you watch it. You may want to time it so that you have a decent meal ready during or immediately after watching. Similar to the art, the music in this series is well done, a mix of what sounds like strings, woodwinds, and piano fitting perfectly with the atmosphere of the restaurant. Again, don’t expect any exciting, epic, action-packed pieces on the soundtrack: the music is designed to help you experience the warm, friendly, relaxed feel of the place. The most upbeat piece of music is definitely the OP, which is actually pretty catchy, while the ED is quieter: blending naturally into the end of the episode. All told, I think this episode both looks and sounds quite good. 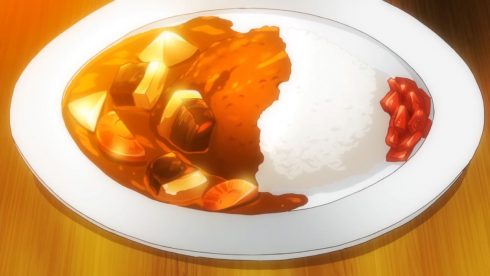 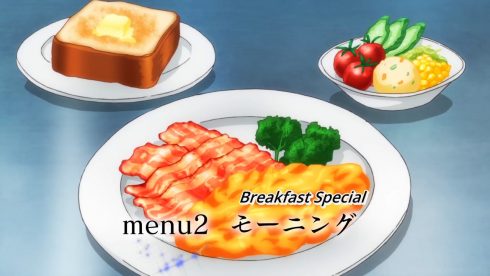 So, I will say this was a very well done first episode. I headed into it uncertain what to expect, but worried that it might be like some other things I’m ambivalent on, and came out of it thinking that it’s one of the best first episodes that has aired thus far. It caught my interest, appealed to me well, and has pretty much guaranteed that I’ll watch it until the end. That’s not always easy to do in just one episode. Now, having said that, at present I am not planning to continue covering this series for review. I have already pretty much decided which series I am going to cover, so unless something really unexpected happens that’s pretty much set. Still, this one is definitely off to a good start and shows promise to continue in this vein. This is a comfortable series about a restaurant and the interesting people who visit and work in it. If that sort of thing sounds like something you could enjoy, I definitely suggest giving this one a try. 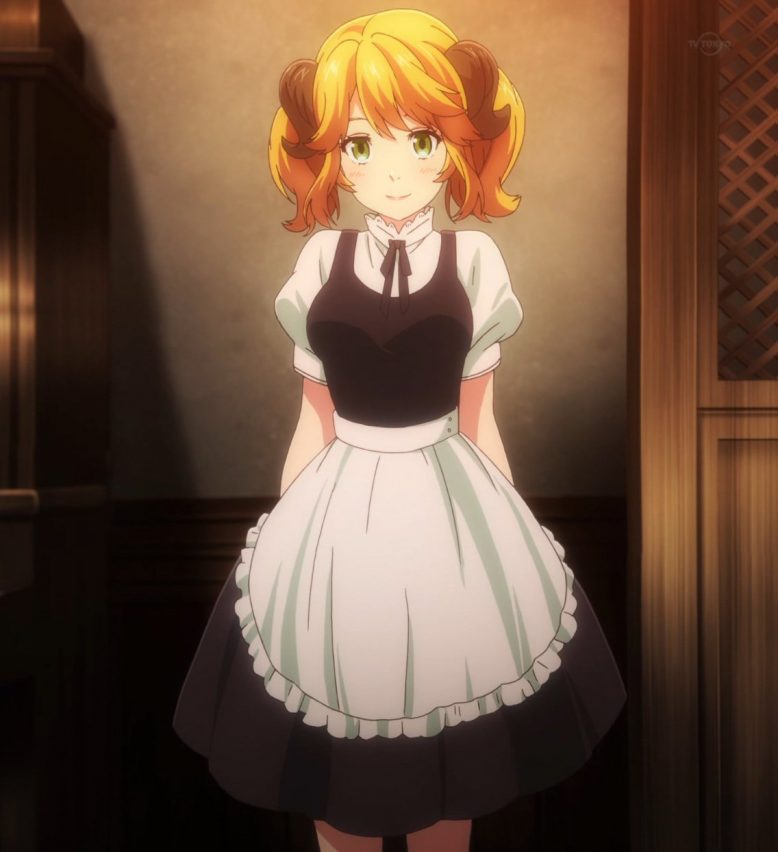