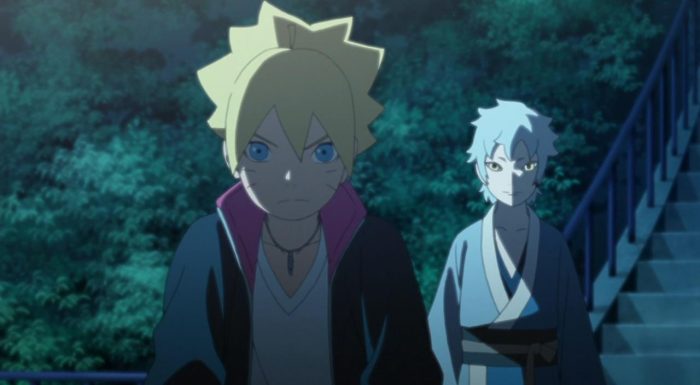 Is this excitement I’m feeling? After a Boruto episode? Do I even dare to begin getting invested in this series again?

Maybe its still too early to tell, but it does seem like Boruto might make a last minute save, as this first story arc of the series comes to a close. I admit, what this week’s episode presented was clever, unexpected and highlighted the best aspects of this series as a whole. It’s in playing to its strengths, that I feel like Boruto finally presented a solid episode after what seems like too long of a while. 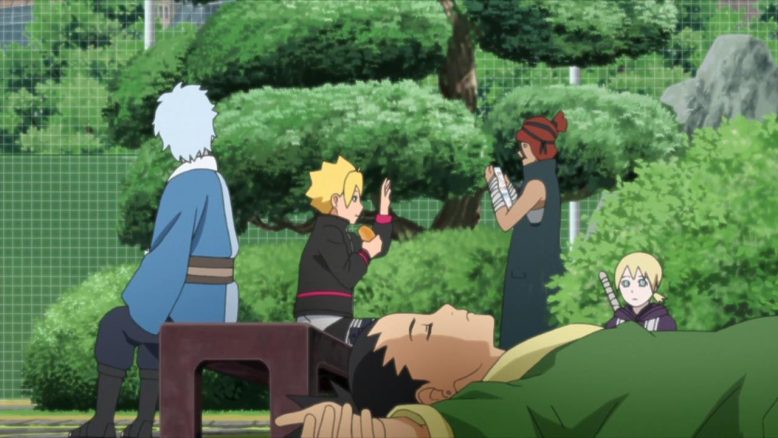 All the good stuff was there, this week. The chief focus was definitely on Boruto himself, and it had to do with what he meant to both Mitsuki and those around him. It felt like  the series was really doubling down on something its really done a great job of establishing; how different Boruto is from his father. I’d go as far, in fact, as to say that this week’s episode pretty much completed that particular idea, one that its been nudging at ever since the series started.

Boruto is really social, he’s someone who lifts up the mood and boosts others. But its the reason he does all of that, it being a direct reaction to the intense expectations from him because of his parentage. I really like how despite perhaps Naruto not being the best dad, and not really being able to balance his obligations as a Hokage with that of a father, he has raised a pretty good kid. 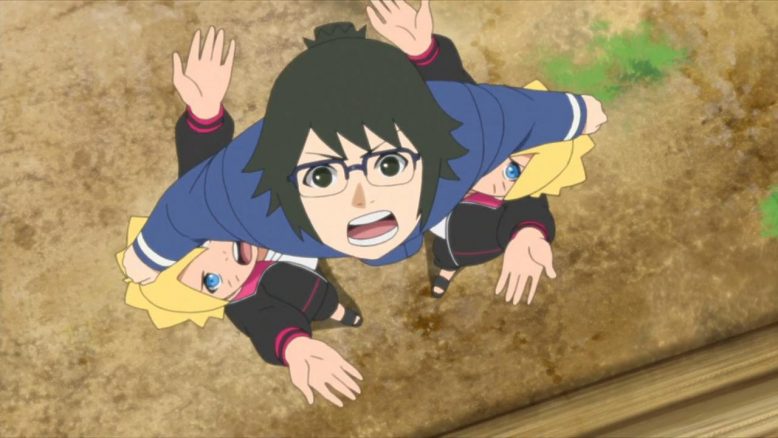 Boruto’s personality and how positive it is, is in a direct reaction to the flaws of his almost universally beloved father. Naruto may be the Hokage, and be the hero that everyone in Konoha adores, but he’s definitely not perfect. The fact that Boruto’s almost polar opposite personality to that of Child Naruto, is a result of his problems with his dad, show just how impactful of an upbringing he has had until the point where he “lost” his dad to the Hokage job.

Indeed what we learn this week, is that the sidelining of the family in favor of the grander Konoha village, hasn’t always happened. Before Naruto became the Hokage, he was actually a really solid father, and so its not surprising that Boruto resents the job of Hokage and all that it represents. The Hokage might be a selfless leader, but he or she is a leader that has to sacrifice their personal life for the good of the collective village. As a son, I’m sure that’s really frustrating, and it puts Boruto’s only real flaw, his immature tantrums at his dad, squarely into context. 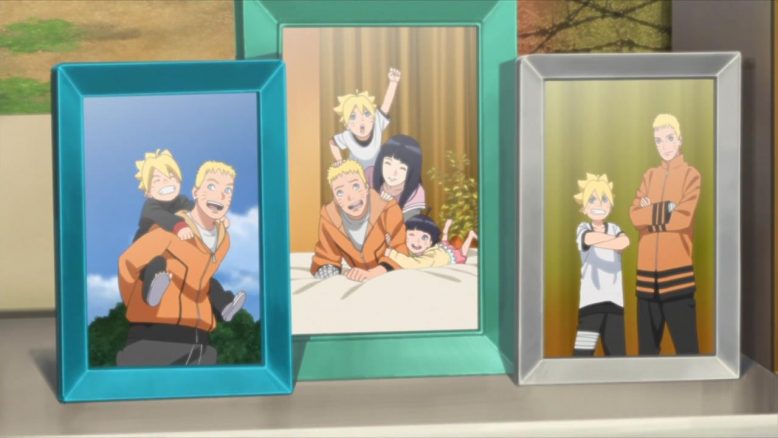 It also makes sense why Naruto doesn’t really scold or fight against his son. His son’s really got a point here, and I’m sure that if Naruto could, he’d do both being a father and a Hokage as best he could. Problem is, the job is really hard. And I will say…. I really like the idea of Naruto achieving his dream, but it not being all that easy once he did indeed get it. In gaining the recognition of the village and his friends, he’s almost lost the recognition and the time with his own family.

On the flip side, of course, Boruto’s actually become more like who his father is currently, than he probably intends to. He’s a natural born leader, he rallies and protects everyone around him, and as we saw in this week’s episode, everyone’s better of because of their interactions with Boruto. 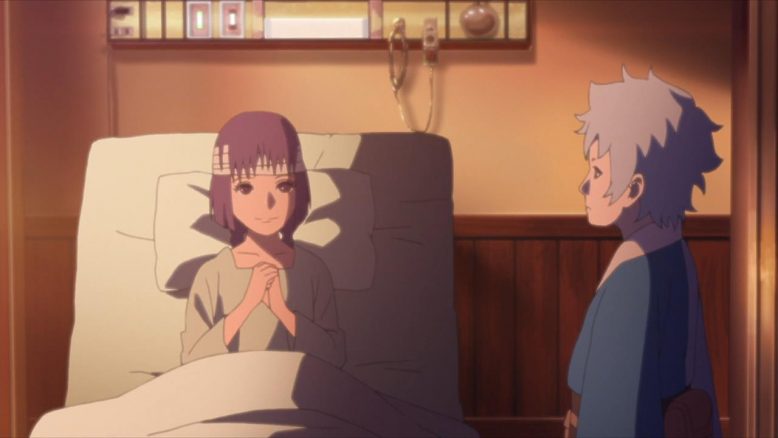 Chief among them Mitsuki, who I had suspected was the main villain in this Ghost arc. Boy am I glad! Simply ecstatic, in fact, around the fact that I was dead wrong. The show really twisted expectations here, and is now suggesting that its the Class Rep that’s the villain, not Mitsuki himself. Mitsuki found out, of course, and that holds true to why he acted the way he did, last week. It also makes sense why he’s so confused about what to do here.

Mitsuki is sort of like an outsider, but whether he wants to admit it or not, he’s become very enamored with and close to Boruto, much like everyone else. Not only that, the fact that he’s someone that was created by Orichimaru with huge expectations, has him easily relating to Boruto as well. Both kids have daddy issues, and both kids are in an interesting. entirely unique situation.

I’ll also admit that the dread and general sense of darkness that came from the revelation this week, felt very well done. No weird tonal shifts, and the show was subtle enough (at leastcompared to itself) in the whole reveal of the Class Rep being the one behind the ghosts, or at least, related to them. There’s a real mystery now of how the most nicest, prim and proper girl in the entire class, is actually someone who’s been brainwashing and instigating violence on the side. 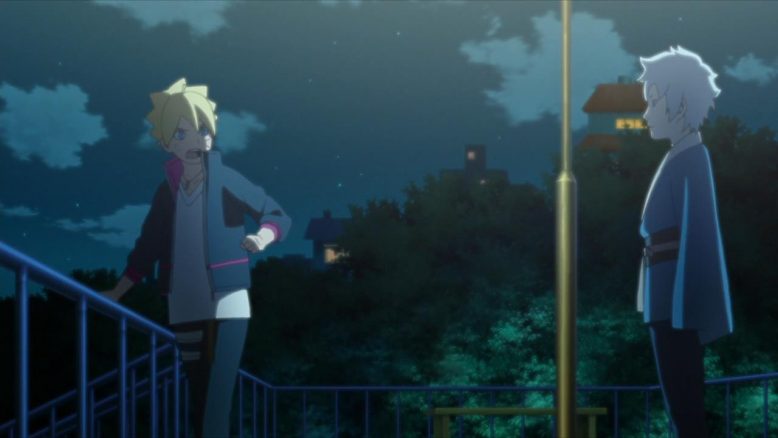 And for once, I’m really curious to see where Boruto is going to go from here. There’s a real sense of dread, high stakes and of things not really being able to go back to the way they were now. If the Class Rep is indeed the one behind all those incidents, then it really does shatter the persona we’ve seen from her. It just turns everything on its head.

The one question, however, is whether the the show can really sell this idea, and pull it off. Boruto has botched the execution of great ideas before, so I’m cautiously optimistic here. Do we get a solid finish and a good amount of payoff for everything we’ve seen thus far? Or does Boruto fumble once again right at the finish line? Next week will definitely be answering that question. And for this week? Well its definitely made the prospect of next week’s episode, very tantalizing, which is quite the change for this series.