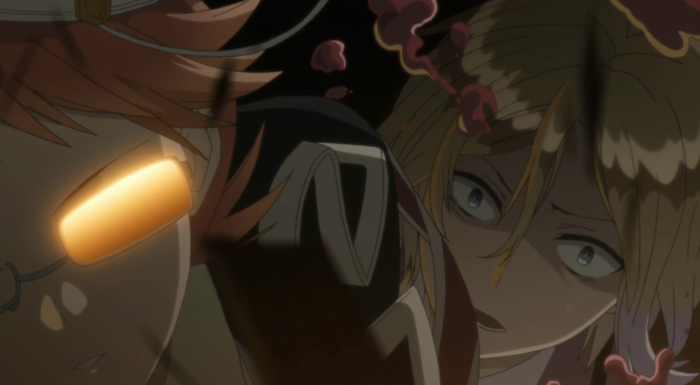 After spending the past few episodes easing us into a more steady blend of goofy and serious, The Royal Tutor ups the ante once again with an action-packed tale of kidnappings and rescues that’s as surprisingly intense as it is utterly ridiculous. This episode really shouldn’t work, and there were times when I feared it wouldn’t, but by the end I was giggling and applauding in delight. This series is uniquely, unapologetically itself, and I’m so very glad for that.

In broad strokes, “The Price of the Past” is about what happens when the things you wanted to forget catch up with you. For Kai (and Bruno to a lesser extent), this means trying to make peace with yourself and others after a violent episode during military school. For Ralf von Fuchs, it means a chance at revenge against the prince he blames for ruining his life. And for Heine, it means using a, ah-hem, very particular set of skills from his younger years in order to protect the people he cares about. 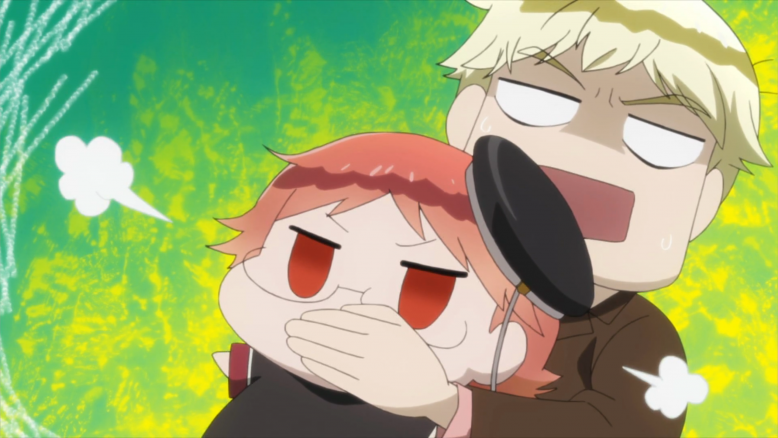 Come at him, bro.

The main (and maybe only) reason “The Price of the Past” works as well as it does is that The Royal Tutor has been preparing us for these reveals and tonal shifts for a while, if not since the premiere then definitely since the third episode. From the moment we saw Leo getting abused by his previous tutors, we knew this was a comedy willing to explore heavier topics; from the moment Heine tackled Leo off a running horse, we had an inkling that our pint-sized professor might be a secret badass; and from the moment Heine reached out his hand and Leo pinched it between two fingers, we knew our cast were always going to gleefully tap dance along the line between sincerity and silliness.

There was also the second episode’s reference to an “violent incident” forcing Kai to leave military school, Heine’s offhand promise to “protect” Licht while he was at his part-time job, and (in retrospect) the outstanding question of why Viktor was always so chill about letting his kids wander around outside the palace with a bare minimum of security. Some of this week’s twists may be surprising, but none of it is new or unexpected, not really. Like a good teacher, the series has been preparing us for this pop quiz.

As much as I enjoyed pretty much everything that went down at Fuchhead Manor (from the trio hamming it up for the camera, to Kai’s self-control and mercy, to Heine turning into a tiny spinning vortex of destruction), two central ideas stood out: the series’ new spin on familiar themes, and the character development (both subtle and overt) from our core cast.

The Royal Tutor has always been about the danger of assumptions and judging others by appearances, but its usually handled this is an optimistic fashion: “I assumed a negative thing and I was wrong,” in essence. This time there are a few twists and complications to this: Kai visits Ralf specifically because he doesn’t want to jump to conclusions about him, but it’s Ralf’s appearance of contrition that allows him to lure them inside and (briefly) capture them. Assumptions based on early impressions once again proves faulty, but this time it hurts the person making the assumption. 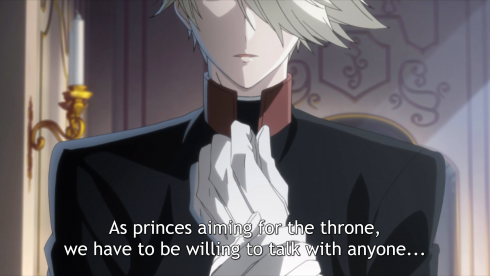 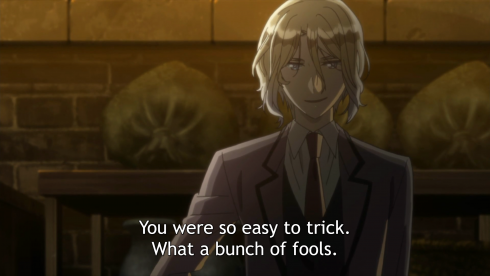 It’s a cautionary tale of sorts, but this is still an ultimately upbeat series, so The Royal Tutor doesn’t simply leave it at “some people are irredeemable assholes, so be careful.” Ralf’s actions are undeniably wrong and he’s going to pay for his crimes, but both Heine and Kai acknowledge that he’s also a minor whose behavior is largely influenced by desperation and prejudices instilled in him by his family.

If “guilt-ridden nice guy” was a mask Ralf created to fool Kai, then “angry kidnapper” was a mask Ralf created to fool himself–to distract himself from his loneliness and fear. Beneath all the violence and anger sits a sad, misguided kid. Once again the series argues against snap judgments and insists it’s more complicated than a simple good/evil binary. Kai understands this, so he only condemns Ralf’s actions, not Ralf himself. Ralf will have a chance to start over someday. Here’s hoping he makes the most of it.

Oh, Heine is gonna ENJOY roughing you up later, my dude.

There’s a second layer to this Kai/Ralf conflict that’s rather fascinating, and that’s the way it continues our ongoing conversation about privilege and prejudice. Although from a wealthy family himself, Ralf von Fuchs has a deep-seated disgust for what he sees as the unfair advantages bestowed upon the royal family. In an attempt to feel powerful against a hated group, he bullies and attacks an individual: the physically weakest of the princes, Bruno. (I, er, may have shouted “Fuch him up, Kai!” at that point. Sorry. But also, not really sorry.)

The thing is, while some of Ralf’s accusations are clear falsehoods (Kai wasn’t at the top of his class), his insistence that the princes received preferential treatment from the professors (and the other students suffered for it) is probably more accurate than Kai knows. As Bruno noted a couple weeks back, he and his brothers are privileged, and that can manifest in subtle ways they wouldn’t notice but others would. Some of Ralf’s frustrations likely are justified at a system-wide level, even if they aren’t at the individual level.

I won’t pretend to know where The Royal Tutor is going with this conversation, or if it has an end-game at all. Even so, it’s a remarkably nuanced look at prejudice and privilege–how the two forces interact, how they can look very different among groups versus among individuals, and how systemic inequality is bad for pretty much everyone. 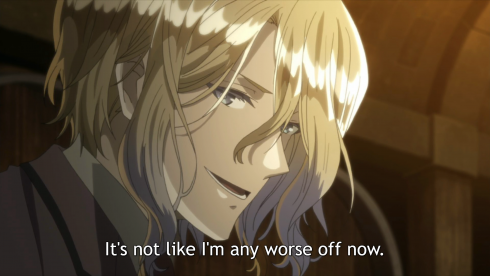 If Ralf is a good example of how group attitudes can influence people negatively, then Kai and Heine are good examples of how individual relationships can influence people positively. As sensitive and empathetic as Kai is, maybe it’s no surprise that he loses control when he sees someone hurting, particularly when they’re his little brother and favorite professor. This time, though, the memory of those who believe in him–and the promise he made to Heine–help him stay his hand. The people he cares about were his greatest weakness, but now they’re also his greatest strength.

All of that’s pretty overt in the episode, of course. What’s a bit less overt is that the same thing happens to Heine. Those Shiny Anime Glasses suggest that Heine really was on the edge of seriously hurting or even killing some of those goons, but Kai’s own self-control and mercy (and perhaps the memory of Viktor crying out for Heine to stop) convince him that he “can’t go beyond appropriate self-defense” either.

Heine doesn’t emote much, but I get the distinct sense the boys are helping him as much as he’s helping them. It’s a quietly sweet little note to end on, considering how wild and dark the episode had gotten.

I have a particular fondness for series that can effectively balance the absurd and the genuine–to turn on a dime from a sweet “I believe in you” moment to a Kai Murder Smile gag; to have your captors troll their ransomer; to include a Tiny Tutor Beatdown sequence that is somehow hilarious (are you kidding me with that handcuff lasso, Heine?!), awesome, and alarming all at once.

It’s tough to pull off, but when done right, that deft shift between the funny and the heartfelt strikes me as more “true-to-life” than the most down-to-earth drama: a tonal encapsulation of what it’s like to live on this beautiful, terrible, weird-ass little planet. The Royal Tutor continues to toe that tricky line, hitting all the right chords for me, and I continue to like it a little more each week. Its silly sincerity is its greatest asset, and I wouldn’t have it any other way. 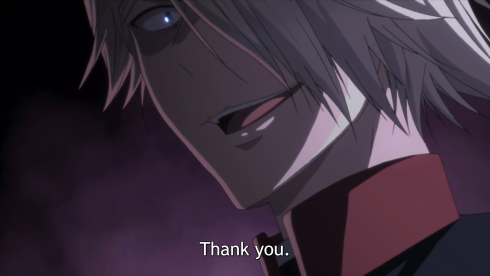 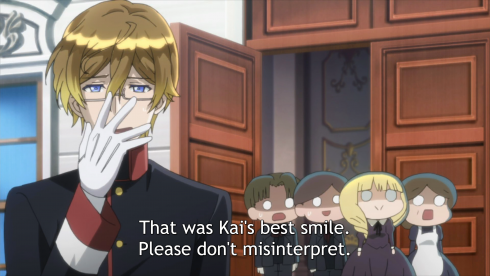