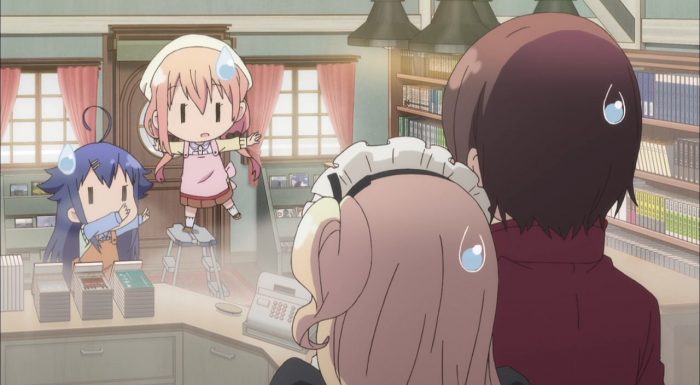 So, important lessons from this episode: Hinako is a klutz, practice makes perfect, and friends help each other out in a pinch. I think that sums it up pretty nicely, don’t you? No need to spend another thousand words talking about it: we can all just go home. 😉 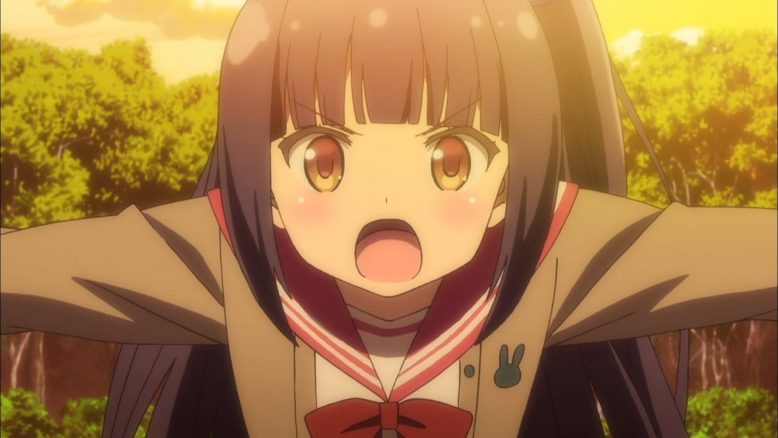 All right all right, I’m just kidding. Ahem. First up, Hinako. It’s actually kind of amusing how she can make Yua feel both superior and inferior at the same time. Superior because, let’s face it, Hinako is clumsy. She’s also a complete amateur at any sort of theater work, so memorizing lines, acting, dancing, all these are things that she has never experienced before. To try to do any of them she has to concentrate and lose track of her surroundings, but then her clumsiness kicks in and she stumbles into people. It’s not hard to see why Yua, who is both graceful, and experienced at acting, would feel superior to her. As for inferior… well… as the camera, and the sound effects, and Ruriko all like to remind us, Hinako is “well proportioned.” She is round in all the right places. Poor Yua, on the other hand, is clearly still waiting to hit her growth, so she can’t help but feel envious and a bit intimidated by Hinako’s curves. 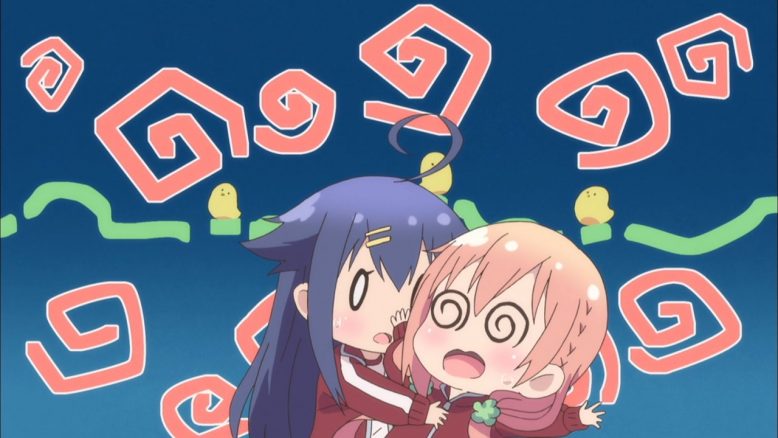 Some viewers have raised a point elsewhere about Hinako’s exercise outfit. When looked at closely, it appears that those black straps across her arms are her bra straps, which can’t be in any way comfortable or supportive. Heck, it might even be causing some… excess movement that’s throwing her balance off. I don’t know if it’s supposed to look trendy or something, but it just seems like a bad idea all around. 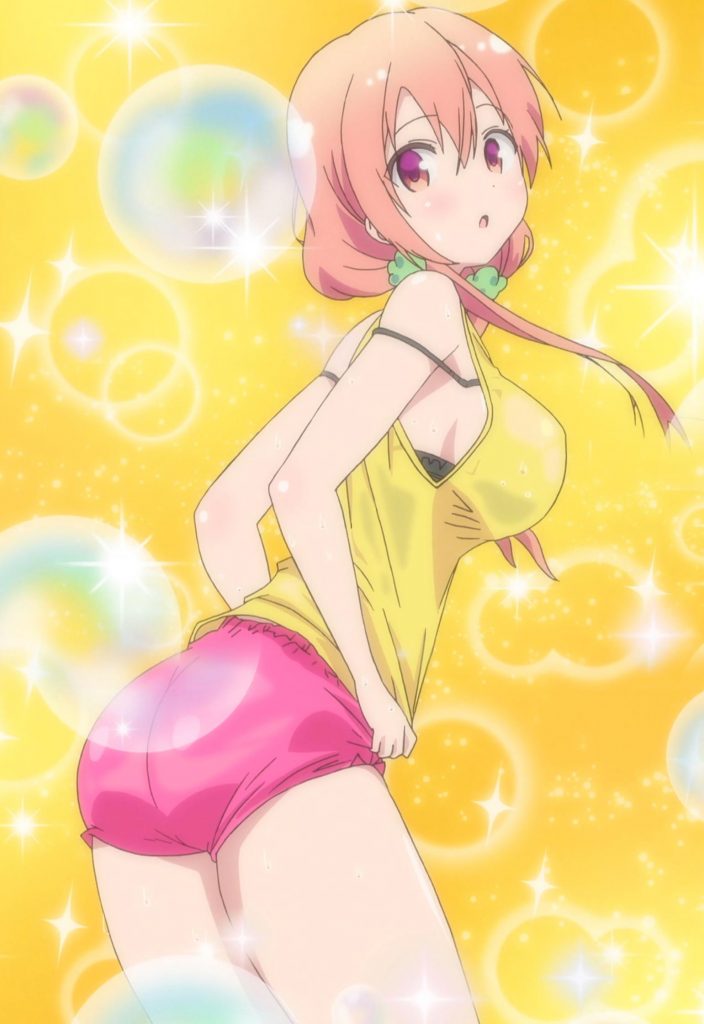 Putting the fanservice aside for the moment, Hinako’s cute klutziness is concerning for more serious reasons. Last week we were told that they had a month until the culture festival when they planned to perform their play. Even for an experienced group that isn’t exactly a lot of time to prepare for a completely new production. But Hinako, who has no training, no experience, and who suffers from crippling stage fright just talking to a single person let alone a crowd, is supposed to be the heroine of this play. That increases the difficulty significantly. Ruriko, as the advisor, should have taken Hinako aside and set up an intense personal training schedule above and beyond the normal practice, if she wanted there to be any chance of Hinako being able to perform the part. The fact that this didn’t happen, that Hinako had to rely solely on the same practices as everyone else along with whatever ideas she could come up with on her own, does not speak very highly of Ruriko’s abilities as advisor. I realize the whole situation was set up so that we could get the friendship moments of everyone coming together to help Hinako by the end, and so Yua could recognize her determination and give up her grudge and choose to help her, but my suspension of disbelief just doesn’t want to stretch past this point. A girl who talks to animals? Sure, no problem. A professional actress who fails to deal with this kind of issue? Nope. Can’t believe it. That probably says something about me. 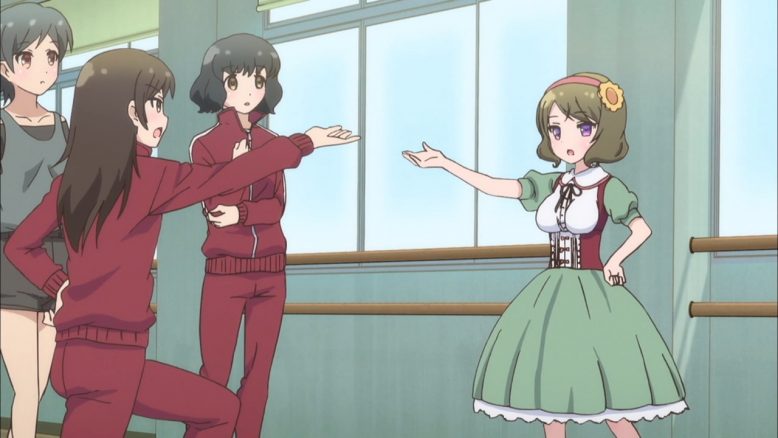 I should probably say something about the bookstore segment in this episode. The animal imitation practice the girls try out is, I believe, an exercise in method acting. The idea is that you study an animal and its behaviors over a period of time (several days, at least, if not much longer) and try to recognize its motions, its habits, try to determine what it might be thinking when it does certain things, what it might be feeling. Then, when you’re doing the acting part, you immerse yourself in your memories and your imagination of that creature, and act like it acted. Not just superficially, but trying to be as much like it as Humanly possible. Hinako’s final attempt with the hawk captures this well: she immerses herself in the memory of it, and evokes the image of it so strongly that her audience can truly see it in her movements, without even being told what she’s imitating. Of course, Chiaki’s imitations of a cat and a dog are also pretty good, and much more fanservicey. Honestly, Chiaki is pretty much built for fanservice, from a character-design perspective, so I knew it was only a matter of time before we got some with her. 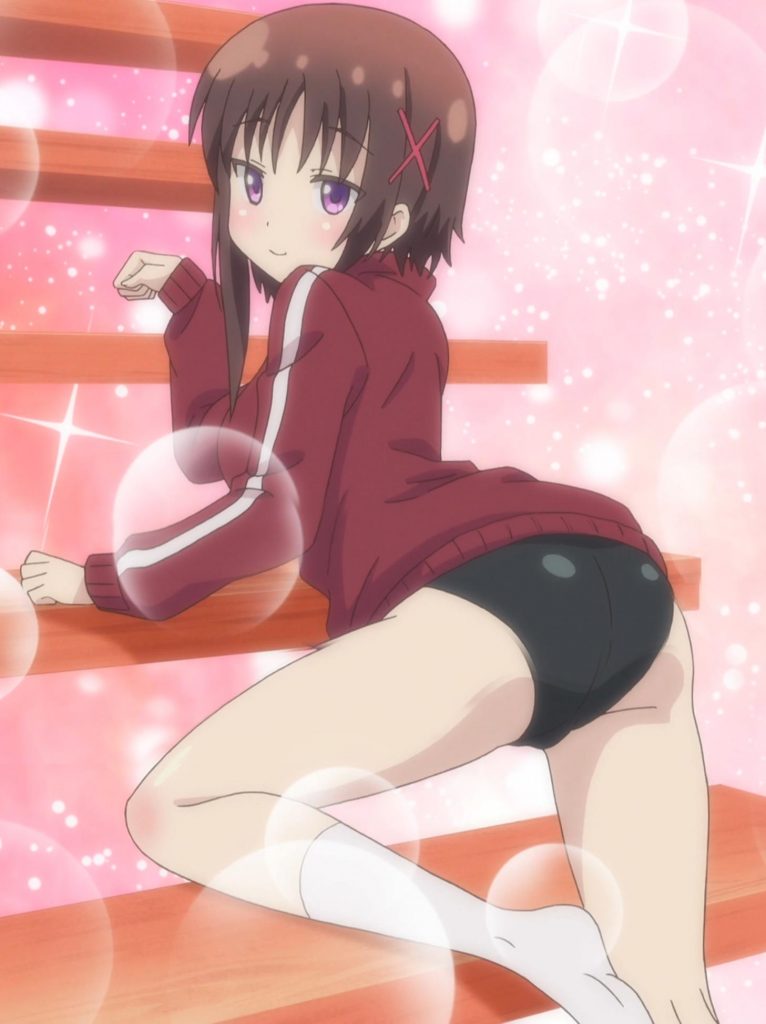 Not a lot to discuss this week, but that’s because the episode is pretty much exclusively focused on the same idea all the way through: Hinako is bad at theater, and helping her improve (hopefully) quickly enough to perform in the play, which is now only a week away. One week! The girls have just started their hardcore practicing with Hinako, and they’ve only got one week left to train her up into a heroine. I wish them luck, but that’s a really steep challenge they’re facing. 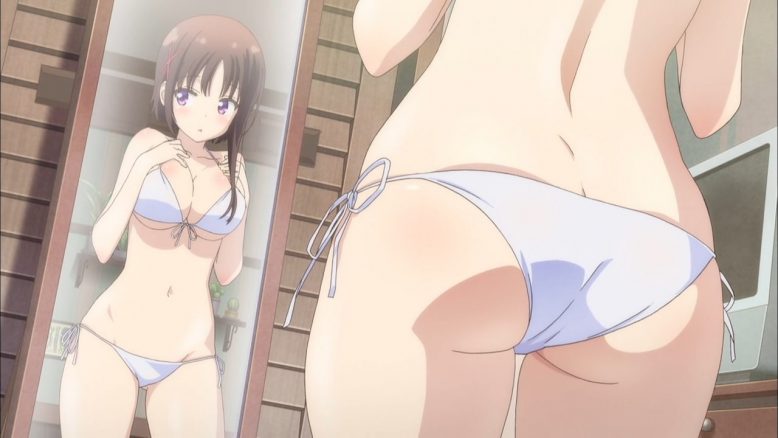 I think I mentioned something about Chiaki and fanservice earlier?