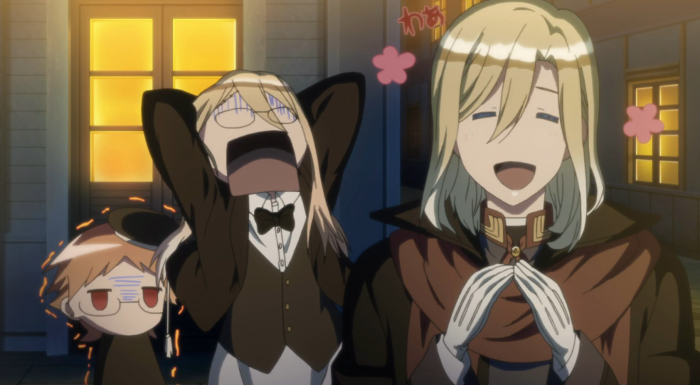 As promised last week, Licht takes center stage–or does he? Thanks to a tattletale noble, our youngest prince’s solo story quickly becomes a duet, and his dad seems more than happy to steal the spotlight with some workplace antics of his own. Employers will be wooed and ladies will be dazzled. But no matter who gets the biggest tip, one thing’s for certain: The sparkling bishounen apple sure didn’t fall far from the sparkling binan tree. (And yes, now you know how to say “pretty man” in addition to “pretty boy.” Y’all are welcome.)

For starters, I s’pose I owe Licht an apology. A couple episodes back I said I couldn’t tell if he was just a fickle, self-centered teenager or the show’s secret antagonist (truthfully, I’m not sure the creator entirely knew what they were doing with him either, given how passive-aggressive he is towards Heine in Episodes 2-3), but in general I saw him the same way Heine does: As a big ol’ mystery, and one I didn’t particularly trust. Turns out we were both kinda wrong!

The trick with Licht is the trick with a lot of people: Their behavior seems unpredictable or inscrutable at first, but once you get to know them, it starts to make a lot more sense. As the youngest prince and the furthest from the throne, Licht never felt like he mattered, a feeling that was exacerbated by a sickly childhood and a father who was too busy to visit (while he was awake, anyway). And hey, if you don’t matter, then you might as well do whatever you want and just have fun, right? Screw princely responsibilities, and screw authority figures, be they teachers, nobles, or dads. 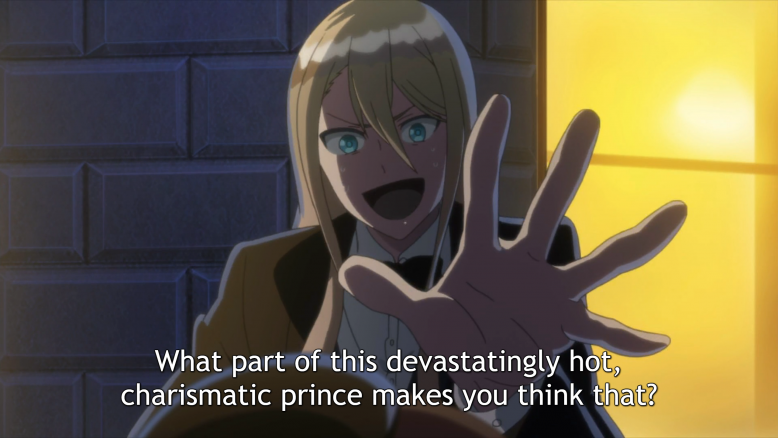 You ain’t foolin’ nobody no more, kid.

Except Licht isn’t all fun and games, not really. He may be a compulsive flirt and a bit of a troll, but he does have a serious streak in him, something both Heine and Viktor discover when they learn about his secret part-time job. As usual, The Royal Tutor does a splendid job of balancing the petty and silly with the weighty and sincere, as Licht tries to hide his identity both to maintain his “party boy” reputation with his brothers (pfft) and because he’s afraid his father will disown him if he finds out.

Neither happens, of course, although Viktor’s disapproval does form the central conflict of the episode–a conflict that’s explored and resolved with that same splendid balance of silly and sincere. Viktor decides to handle Licht’s accusation that he “doesn’t even try to understand [his son]” in the most hands-on way possible, trading in his crown for an apron and joining the Café Mitter Meyer staff so he can share his son’s experiences! In so doing, he freaks out Licht and even flusters the level-headed Heine, which has got to be some kind of superpower. I can’t say I saw this twist coming either, Mr. Tutor. 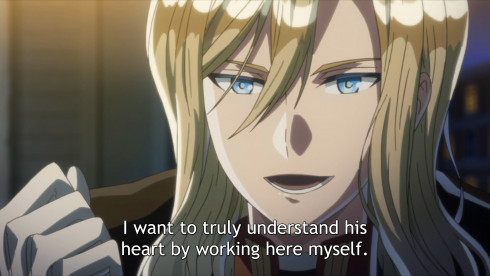 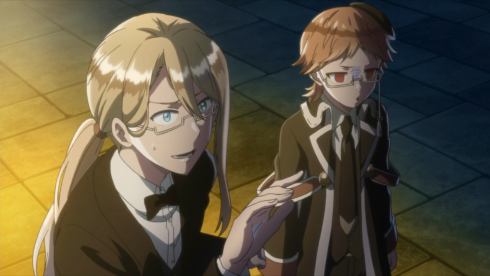 That’s what I love about this episode, really: while it treads familiar ground in broad terms (who hasn’t seen an arc about a Teen With Daddy Issues?), it still tells a unique, surprising story by (a) being goofy as hell, featuring a whole lot of bedazzled patrons and an increasingly frazzled Licht, and (b) focusing on the importance of mutual understanding–of reaching out and meeting someone half way.

A lot of anime parents are depicted as either ideal, comically inept, or utter garbage, but Viktor is neither perfect nor a fool nor a monster. He’s just human, a person with good intentions who struggles to balance work with family (a task that’s doubly difficult as a king, when you can’t exactly “clock out” and your family is part of your work) and is limited in how much he can know or understand about other people. It wasn’t intentional, but Viktor did mess up along the way. He didn’t realize how important this job was to Licht, nor how much his absence had upset his son when he was younger. Once he does, he doesn’t try to make excuses: He simply acknowledges his mistakes and apologizes for them. 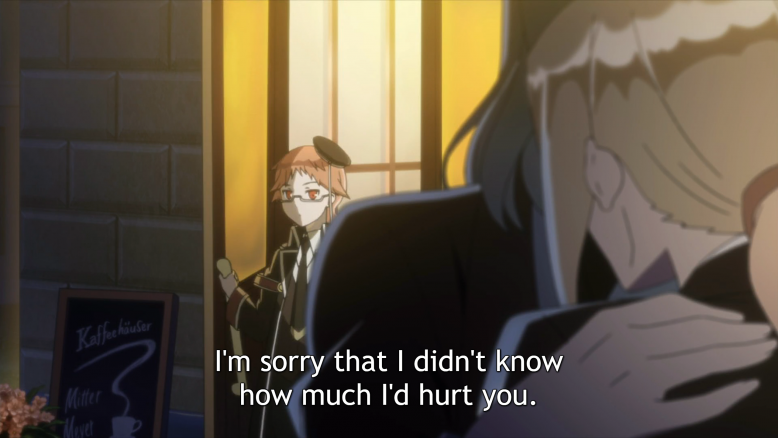 OH NO the silly comedy show is making me feel things, send help.

And, in the process of trying to understand his son, Licht comes to understand his father better as well–to realize just how much is required of a ruler, and to develop a healthy amount of respect for Viktor’s wide array of talents. He also sees that Viktor does give a damn about him, even if he isn’t always very good at communicating it, which encourages Licht to give a damn in return.

Granted, this creates its own conflict, as Licht wants to keep his job but doesn’t want to make his dad worry, but at least this problem is born from empathy instead of bitterness. It’s also the first time we’ve seen Licht put someone else’s wants ahead of his own, which is a pretty big milestone for our self-indulgent fifth prince. 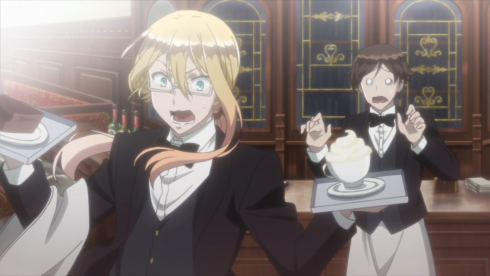 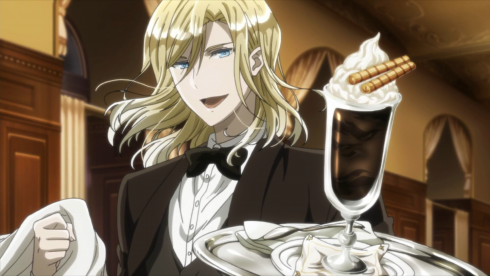 As a nice thematic bonus, Licht and Viktor’s respect for the other one’s job helps to further bridge that ever-present gap between royals and commoners. When Licht tries to put his father on a pedestal, Heine stops him with a subtle “all jobs are hard work to some degree,” as if to reject the idea that there’s a hierarchy of careers, or that working at a cafe is somehow “less” than running a kingdom. It’s different, to be sure, and the stakes may not be as high, but that doesn’t mean the people doing the job aren’t trying just as hard (and heck, sometimes harder).

The fact that the king can jump right into the cafe and handle the job with ease creates an additional connection I quite like, as it equates being a good leader with being a good waiter. It’s a job that requires communication, observation, and empathy: anticipating other people’s needs, listening to what they want, and cooperating with others to make it happen (or knowing how to gracefully diffuse a situation when someone is being unreasonable). To lead is to serve others. Licht is getting a better education than he realizes. 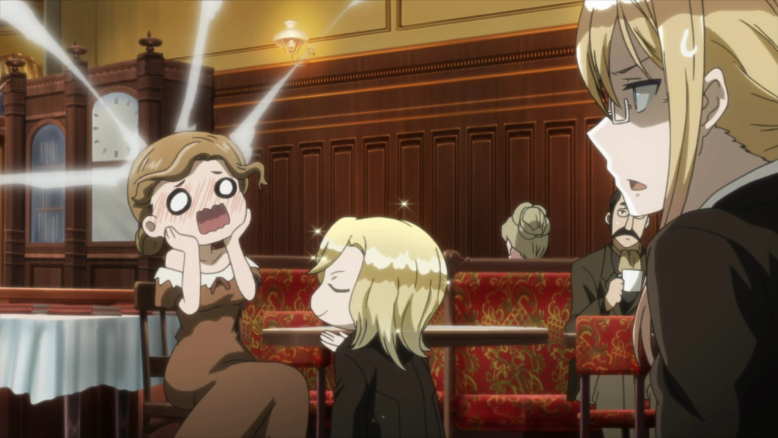 Not quite the lesson I meant, but I’m sure Licht was taking notes here, too.

Heine doesn’t have much to do this week other than sparkle about coffee and drop a few tidbits fleshing out his relationship with Viktor (they’ve apparently known each other since they were kids and Viktor was the first person Heine ever trusted, hinting once again that Heine had a rough childhood), but, like a good teacher, he still finds time to help Licht solve a problem that’s too tricky for him to tackle on his own. Rather than quit his job altogether, Heine offers a compromise: he’ll come to the cafe once a week, and Licht can work while he’s there. Don’t’cha love it when a plan comes together?

Heine’s Super Observation Powers also set us up for the plot that may have found its way into our episodic comedy. The nefarious (but probably sympathetic and redeemable) Count Rosenberg is the one who first rats Licht out to his father, and it looks to have been part of a larger plan to disgrace the princes and get them removed from the line of succession. There’s political scheming afoot, and only our protagonist suspects anything. Protect our good boys, Heine! We’re counting you! 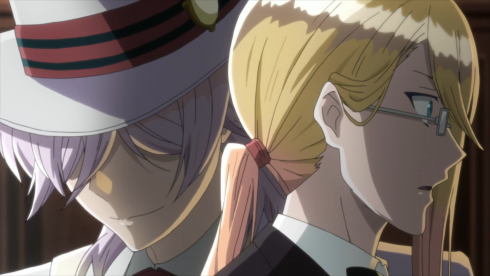 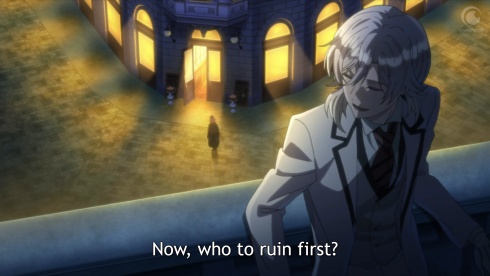