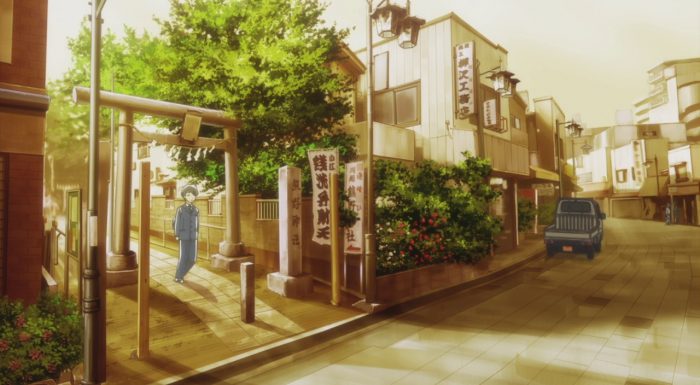 Well, the Spring season officially began for me yesterday, and by officially I mean that the flood of premier episodes of the new season has done it’s job, inundated me and I am desperately trying to dogpaddle to keep my head above water! Thus far the series I had watched seem kinda “just okay”, but thankfully with the first episode of Tsuki ga Kirei (one of the series I was most anticipating before the season began) the bar has been raised a bit. Frankly, I thought the first episode was downright excellent. But it is definitely not for everyone. The first episode was very quietly paced, and (as one viewer of the episode commented) rather reminds one of a poem in some ways. It is beautiful, but has little action, and leaves you with just as many questions as answers it may suggest to the reader. For me I happen to love this kind of thing (I am appreciative of atmospheric kinds of aesthetic presentations), and if the rest of the series will be like this this will easily be one of my favorite series of this season. 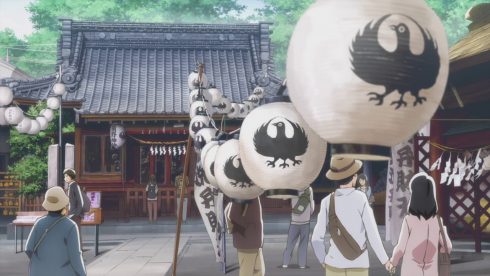 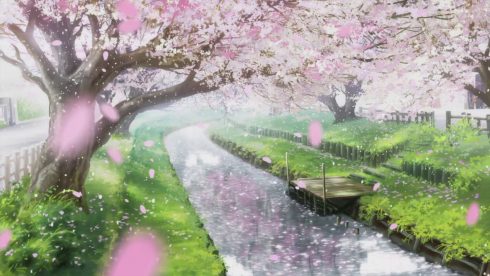 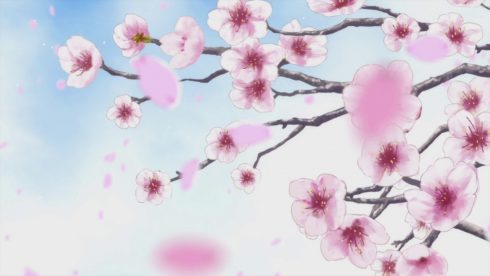 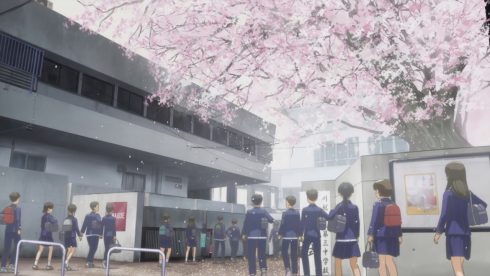 For those unfamiliar with the premise of the series here is a summary of a little of the first episode and of the series in general: “Azumi Kotarou and Mizuno Akane became third year students at junior high school and are classmates for the first time. Akane is a third-year middle school track team member who relies on squeezing a small plushie to build up her courage, while Kotarou possesses a passion for books and writing and is a member of the Literature Club. Both tend to be quiet compared to their friends, but they start noticing each other as their paths regularly cross, whether it be in class, eating with their families at a restaurant, or while helping to set up for the school sports festival. Though neither one seems willing to admit it yet, love may be in the air. These two, along with fellow classmates, Nishio Chinatsu and Hira Takumi, relate to their peers through mutual understandings and feelings. As their final year at junior high school progresses, the group overcome their challenges to mature and become aware of changes in themselves.“ 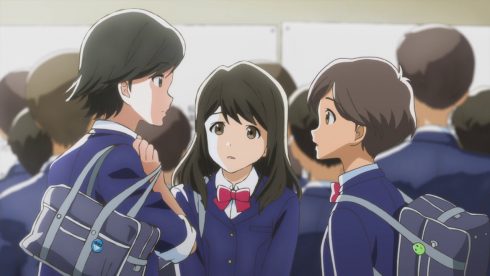 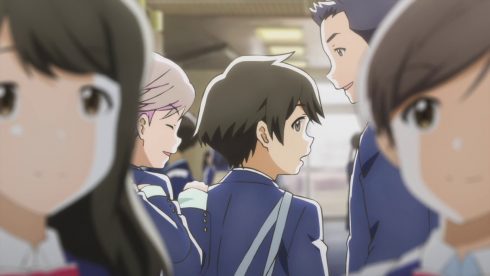 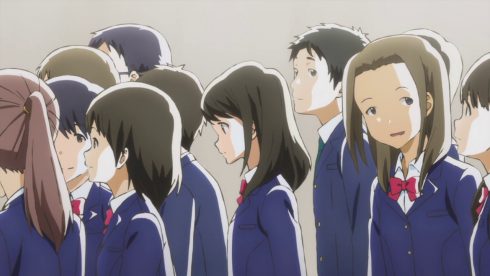 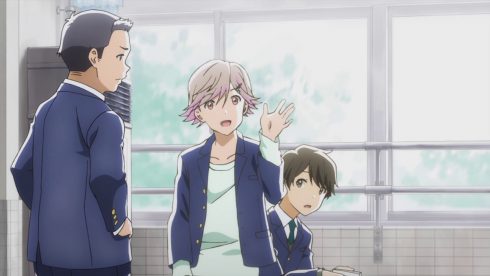 Now there are many places I could begin with in praising the first episode of this series, but out of the gate the very first thing I feel I should emphasize is the authenticity of feeling and actions of the characters, and not only the characters individually, but the way people interacting with one another is portrayed. Half way through the episode there is a scene where the families of the two new classmates (Kotarou and Akane) both just so happen to go to the same restaurant on the same night and time to eat out. It is Kotarou who first recognizes Akane (by her voice, interestingly) and as one thing leads to another the parents of both families suddenly are introducing themselves to one another, saying how their children are classmates at the same school. The direction and voice acting of everyone involved was simply SUPERB. Time and again I found myself leaning back and thinking: “Wow. That’s really well done.” to myself. 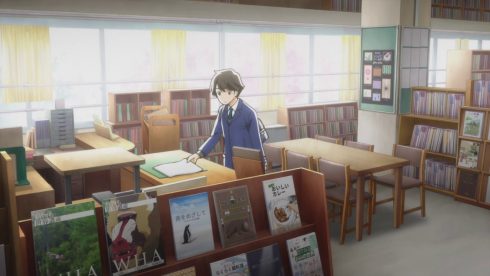 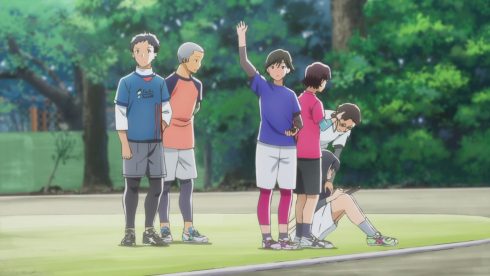 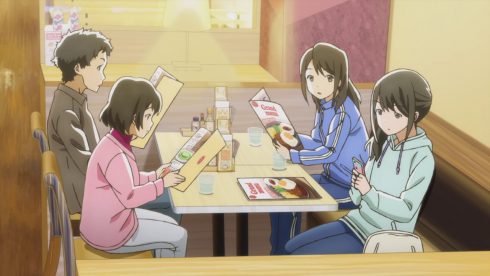 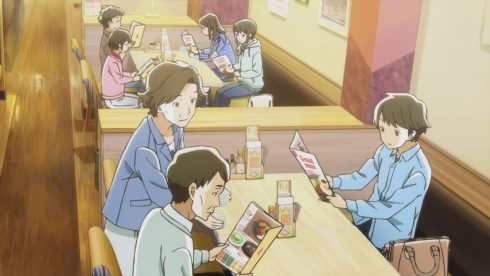 I mentioned earlier that the series is very good at atmospherics. In some ways the water color’y, pastel-like presentation reminds me of Hourou Mousokou (aka The Wandering Son). Admittedly I am a sucker for the particular way of illustrating characters used here, especially using the thin white line around aspects of the characters (especially their hair), but the general use of lighting in the scenery shots of both buildings, nature or inside rooms, is really well done. This is not on the level of a production put out by, say, Ufotable or Production I.G., but it does really well considering the budget it seems to have been allotted. 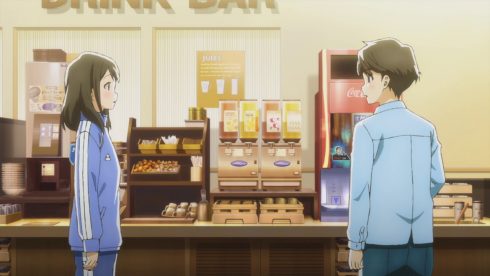 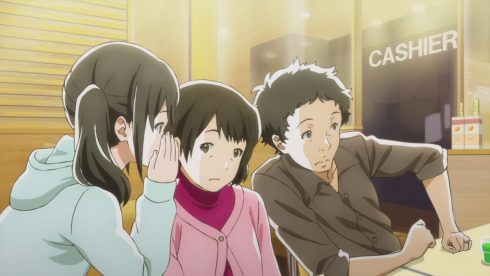 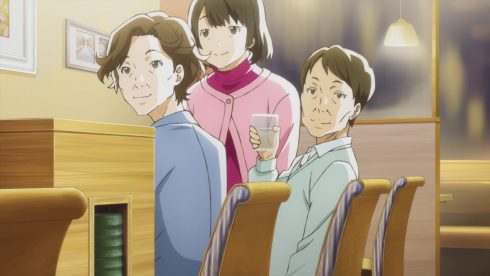 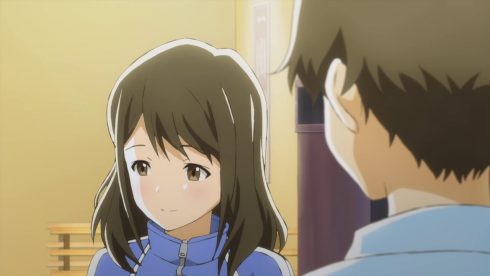 For those who have read my posts for some time now you are already familiar with my love of atmospherics in all likelihood, but even more than visuals this extends especially to the audio side of things, and Tsuki ga Kirei nails this aspect as well, on all fronts. The VA work really fits well and came across as convincing. The background and OST were subdued but really spot on in their accompaniment, while the OP and especially the ED were really, really good. All of these things really helped make the setting “leap off the screen” in a way, but to leap in a reserved, shy and even “genuine” kind of way. That sort of genuine and convincing feeling (it was present in a different way for me in the recent Udon no Kuni series, for example) is a rare and precious thing to discover in a series these days! 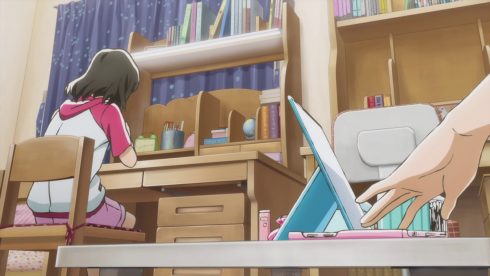 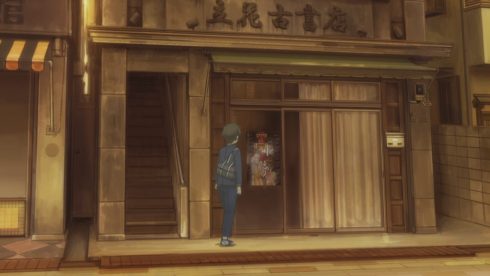 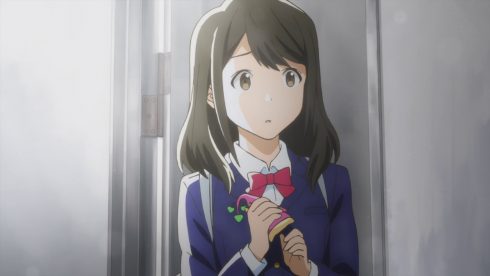 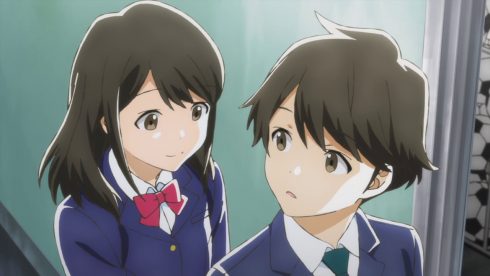 I think, though, that one of the most surprising things I enjoyed about the first episode was (unexpectedly) Kotarou, the male lead. Akane was gentle and endearing, yes, but Kotarou was something else for me. I am not sure why, but he came across in some of his ways and mannerisms as someone I found myself incredibly able to relate to at that time in my own life. I found myself really liking him, and even someone I could easily see befriending way back during those awkward years when all aspects of the human person are growing wildly and the poor souls are fascinated and bewildered, dreadfully uncertain and curious all at the same time. We have yet to meet the other two characters mentioned in the summaries of the series (it will be focusing particularly on four characters and their interactions with one another, we are told), but if they will be as well crafted as Kotarou and Akane I think we could be in for quite a story. 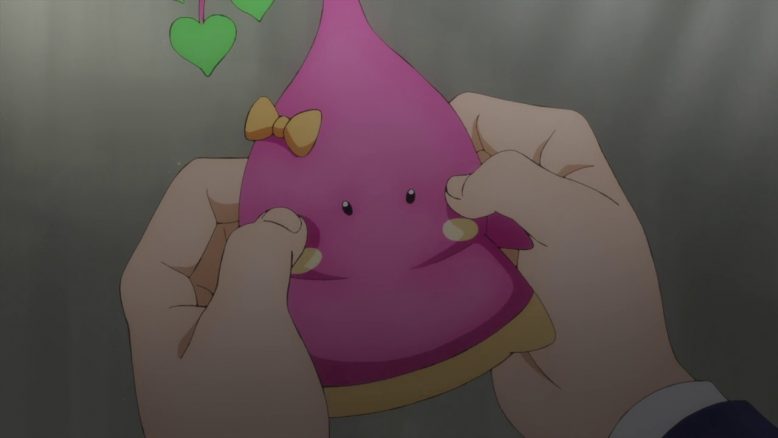 Still not sure what this mascot squeeze-plushie thingee is …

Of course it is way too early to tell if this would be the series I will be blogging this season, but it certainly has made a strong start in my book, stronger even than the other series I had been considering to blog before the season began (Alice to Zouroku). If I had to grade this first episode I think I would give it an A- or so. It really was good, and I can only hope that it keeps to the steady pace and style (or better!) as the episodes continue coming out. (Ah … before I forget, thanks to Enzo at LiA dot com for the screenshots!)