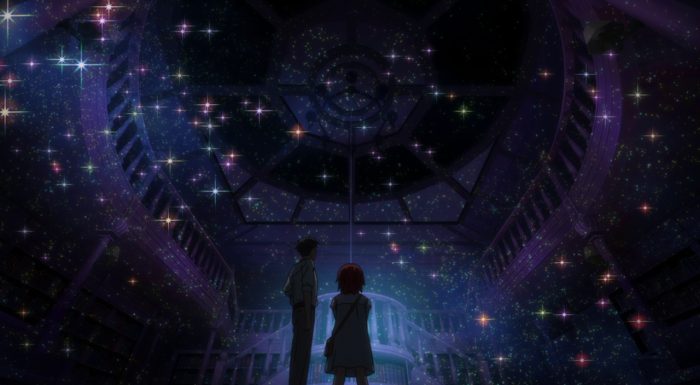 So the story of the “prequels” to the (recently announced) upcoming two cour anime adaptation of the Mahoutsukai no Yome manga have begun to take a very definite shape with this episode. The first episode primarily introduced the viewers to Chise and those who live with her, yes, but also to Chise as she was before how things were now – when she was a child and very much an unhappy, “lost” and unloved little thing who seemed to have been dealt quite the heavy hand at her birth. Readers of the manga alike were no doubt intrigued to see more of the details here and there of Chise’s childhood, which was not delved into in the pages of the source manga much. But in the midst of her decidedly unhappy childhood she was able to experience a brief moment of “coming up for air”, and although even that was not uncolored by sadness, it was nevertheless extremely formative in her growth. 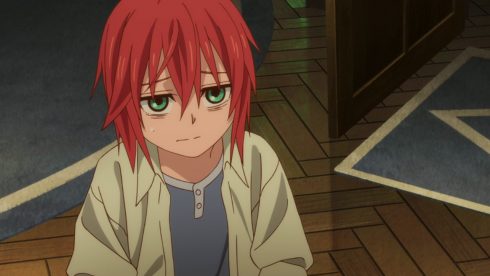 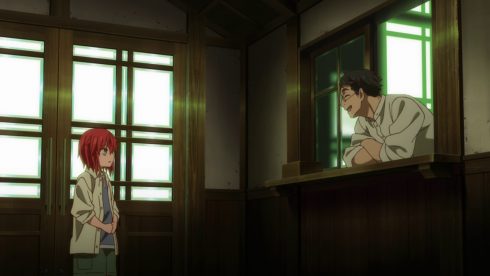 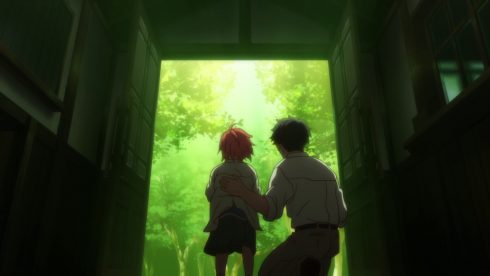 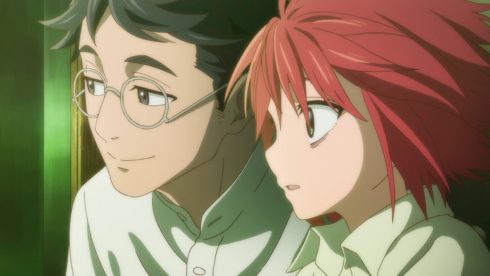 This bright spot involved Chise, who is a very rare and special type of human known by some members in magic-wielding circles as a “slay vega” (some spellings list it as “sleigh beggy”), encountering someone else who … frankly could see the same “world” she could and was somehow a touchstone of sanity and reality that she herself was not crazy or hallucinating, somehow. This someone was a magician named Miura Riichi who lives in a huge library tucked away in a forested part of a … town? city? … in which Chise currently is living with some relatives, as her mother died some time ago by committing suicide before her eyes. 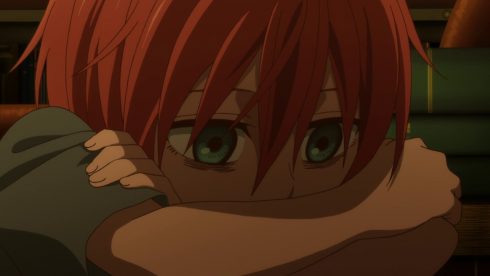 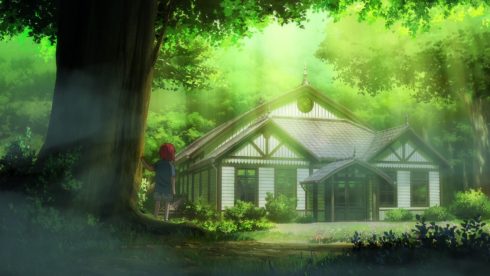 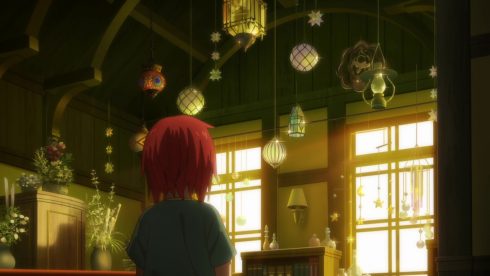 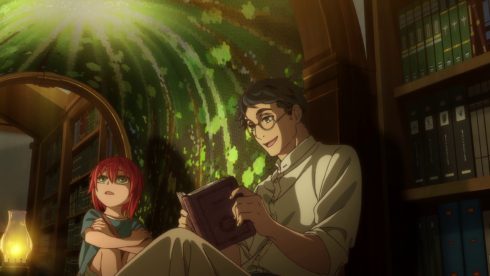 Chise stumbles onto the library towards the end of the first episode of this OVA series while trying to flee from a … monster of some sort that takes the form of a giant rat and pursues her in the woods, and much of the beginning of episode 2 shows Miura behaving towards Chise in a very normal way, yes, but also kindly and gently. For the young Chise who has known very little of either disposition from others up to now, this behavior and the quiet, safe “world” of the secret library tucked away in the forest becomes an oasis in the midst of a scorching desert. She begins to know a teensy bit of … some modicum of happiness, and it is heartbreaking to see how she responds to Miura’s normal interaction in such a hunted, fearful way while starving for it all the same – it has been some time since I have seen such haunted eyes drawn so well. 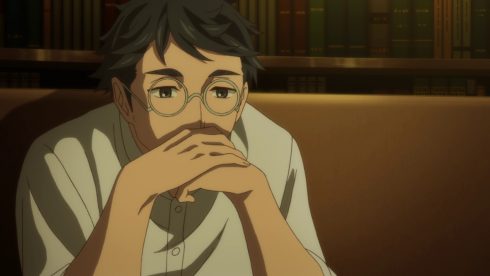 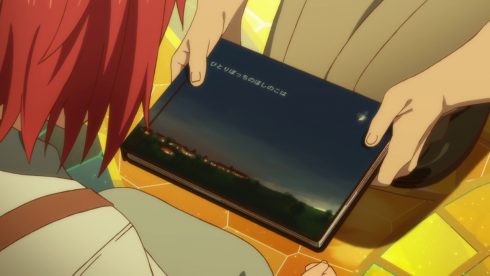 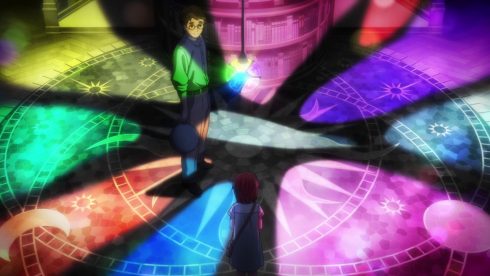 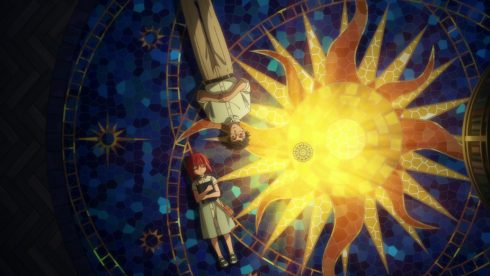 However, everything is definitely not all as it seems, and as the episode goes on we begin to be shown glimpses that Miura the librarian’s “inner world” is not quite as wholesome or integral as it may first have seemed. There is something about the library and its inhabitants (some sort of small, dark piles of fur with brightly shining eyes that apparently also like to read the books therein) that is decidedly “off”, and they seem to have some kind of unbalanced or unnatural hold over both his emotional and mental state’s balance. The “weakness” that is being exploited (though perhaps not maliciously – it is hard to say) seems to be related in some way to a young woman Miura refers to as Mayumi, and it seems there is something about Chise that reminds him of her. 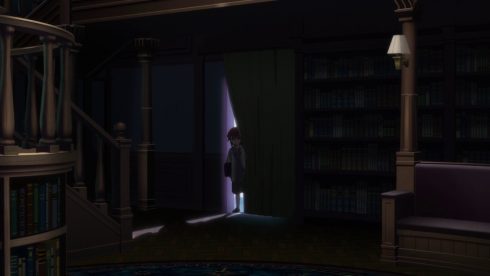 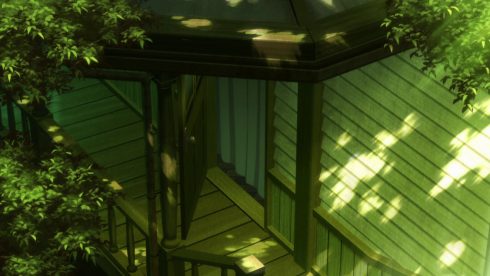 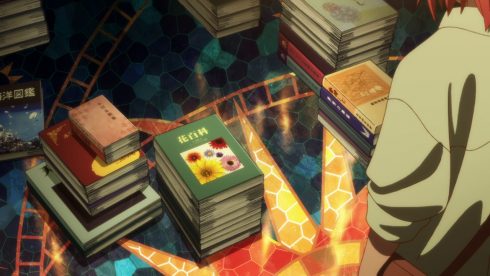 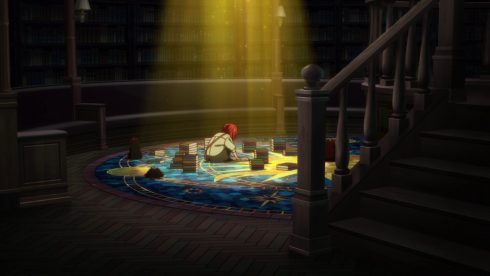 The psychic unrest gets worse and worse for the librarian, until he finally tells Chise that she will have to not visit the library any more (apparently at the command of the “something” that is communicating wordlessly with Miura and tormenting him) and lets her have a sort of “farewell gift”. He shows her some breathtakingly beautiful sights of the inside of the library and the celestia; firmament above at night time as the roof somehow “falls away” temporarily, and Chise (and the viewers) are positively agape and spellbound at its sheer and overwhelming loveliness. Man, it has been some time since I have seen such beautiful animation in anime episodes – and these OVAS just keep nailing these scenes again and again! 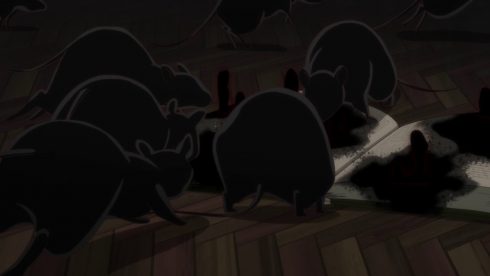 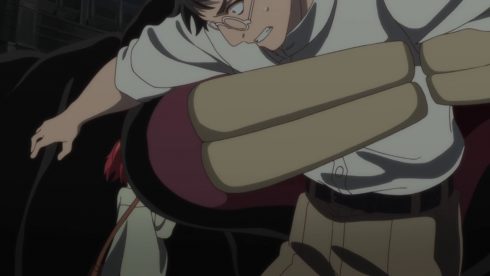 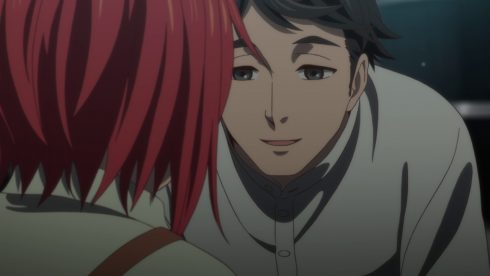 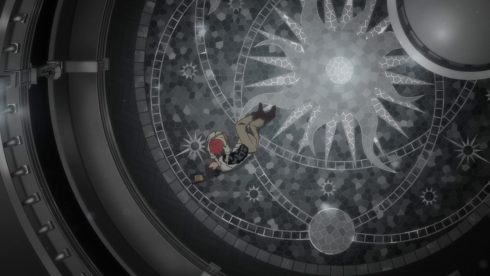 Sadly, though, Chise has come to love the library deeply, and when she goes to look at it again she finds herself unwittingly tricked by that same monster that pursued her in episode 1 of the OVAs when she leaves a side door to the library open and allows for the monster to enter and destroy the tomes inside and attacking Miura, leaving him at the very least near death’s door if not already gone. The ending here was unexpected and really hit me out of nowhere … I could not help but feel crushed inside at what poor little Chise must be experiencing and thinking in those final seconds after Miura showed her kindness one last time before collapsing. 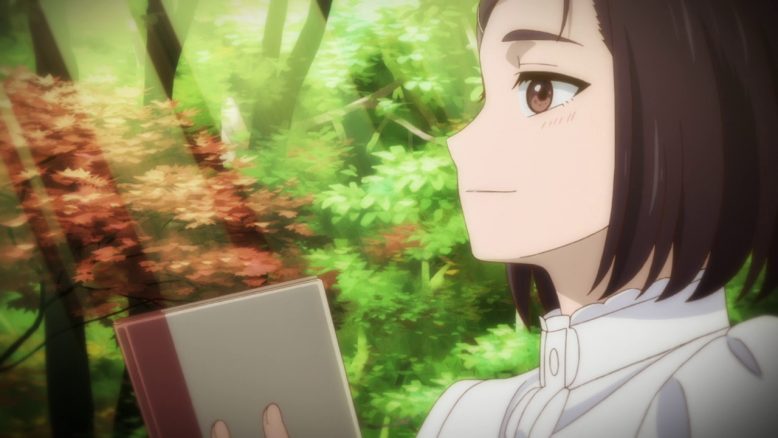 Just who is Mayumi, and what is her involvement in the story behind these OVAs?

Needless to say this ended on a very strong cliffhanger. It seems the final episode will give the viewers an opportunity to see more of the link between Miura and Mayumi, but will also (perhaps “most importantly” for the story) show the complete extent of how this encounter Chise had as a young child was so formative on who she became to be when we encounter her at the beginning of her story as told in the source manga AND in the upcoming anime adaptation this Fall! YAY! Once again special thanks to LIA dot com for the screenshots – they really were a help as I have been quite behind on my time of late. Apologies!

See you all for the final episode in the autumn of this year! ^^